This is Dimple as of a couple days ago; she is a buff Orpington. I was dubious of her gender when she was younger, but everyone said pullet so I still assume Dimple is a she. Dimple is a bit over 20 weeks (maybe 21? I'm having a hard time keeping track now). The nice-looking comb is a very recent development; she had a total babyface up until a couple weeks ago and now has the biggest comb of my bunch. 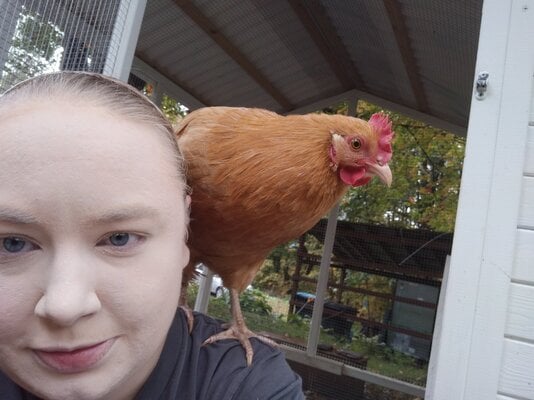 Dimple is a bit odd in a few ways. She quit growing a while back and is very much the smallest. She's also got proportionally short legs - I know it may not look like it in the photo because of the angle but her proportions are strange enough that she has face-planted when going downhill more than once; she's very front-heavy. Despite being strangely proportioned, she is strong and generally seems healthy. Up until recently she was middle-to-low in the pecking order. She has always used her hackle feathers liberally, but I put that up to her being small and trying to look big in flock disputes.

This week Dimple had a sudden personality change started acting like what I've read/seen of roosters defending their flocks, not just being top dog but also intervening in fights between the other chickens and coming running to get in the way if anybody gets spooked or upset. She's done this quite a few times so far. For example, I accidentally surprised one of my other girls today with a hand reaching into the coop at an odd angle and Dimple practically teleported in from the other side of the run and bit my finger! She realized it was me shortly after and immediately wanted pets, but this is a big attitude change from a chicken a mere week prior would run and hide if I sneezed. She is also now bossing around a couple of birds that are around twice her body mass. Two things changed around when Dimple randomly decided to become brave: I added a run extension and one of my other girls laid her first egg.

So...what exactly is going on with my little Dimple? I have read that in the absence of a rooster, some hens will crow or be really dominant. Is that what's going on here or did I cause something weird with the run extension? What happens if you later add a rooster into a flock later that has a hen occupying the rooster roll?

She may be taking the lead hen position in the absence of a rooster. But would help to post a new photo of her side view showing any saddle feathers.

One of my Orpingtons went through the exact same change. (Including biting!) She lays eggs, so definitely a hen...

LadiesAndJane said:
She may be taking the lead hen position in the absence of a rooster. But would help to post a new photo of her side view showing any saddle feathers.

I'm pretty sure she doesn't have any rooster saddle feathers. No pointy feathers back there that I can see when I've checked. Unfortunately, trying to get a good side view of Dimple lately always turns out looking like she just engaged her warp drive lol she is not easy to photograph.


Ais said:
One of my Orpingtons went through the exact same change. (Including biting!) She lays eggs, so definitely a hen...
Click to expand...

Huh! Did the shift for yours happen around the 20-or-so week age mark too?
A

Yeah right around there... I've read on here that they can get that way from a combination of the hormones they get when they start laying and lack of a rooster.

DonyaQuick said:
Dimple is a bit over 20 weeks (maybe 21? I'm having a hard time keeping track now). The nice-looking comb is a very recent development; she had a total babyface up until a couple weeks ago and now has the biggest comb of my bunch.
Click to expand...

Hormones are flowing, coming up on POL(point of lay).
They can get testy around then.

Poor little Dimple is so confused. I have to say she really is doing a fine job of roo duties so far. Keeping watch, getting everyone back under shelter when she sees something, checking up on one of my others when she's in the nest box laying, etc. Dimple gets no respect though when the coop door opens in the morning. She wants to be first out to give everyone the all clear, but half the time she gets body slammed out of the way by the chicken stampede and ends up last lol. Still waiting to see any signs that of getting ready to lay an egg. She's still the only one that doesn't squat and she still has a pretty narrow backside. The others have all sort of filled out back there although only one is laying so far so there's time yet.

Dimple was also a little trooper recently with a bad nose issue. For a few weeks she's had weird little bumps on each side of her nares where I wondered if it could be a small abscess. She's had a lot of scrapes where the comb meets the nares; I try to disinfect them each time I see one. Her nose is also kind of funny shaped anyway, so I waited and just checked up on her nose regularly. She came up to me yesterday and shoved her face in my face repeatedly, I guess going "look at my nose please" and yep one of those bumps had partially puffed up overnight with plug that needed removal. I thought it was going to be a two-person job but she was amazing and just stood there, closed her eyes, and let me go in with tweezers; took darned near a half hour since the plug was really hard to get a hold of and didn't come out in one piece. She shuddered when it hurt, but never tried to run off. Now it's shrunk back to normal size, she has a little external hole there that looks like some sort of funky nose ring. I don't think any of my other girls would just stand there for something that invasive. Brave little Dimple! 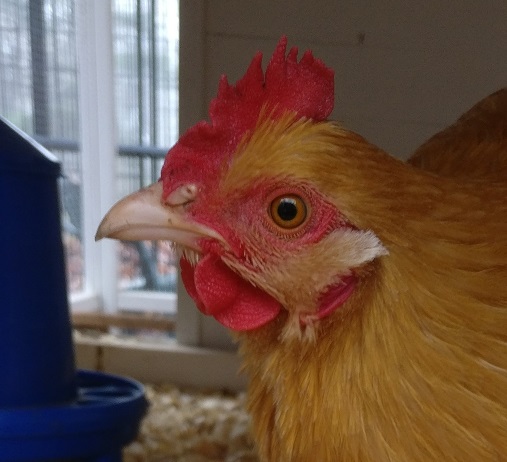 Well, Dimple continues to be...Dimple. She's still filling the rooster role quite well, but she also started doing The Squat recently when I go to pick her up - first normal pullet behavior I've seen from her really. This morning though I got an obvious squat and then very rapidly switched to dropping a wing and tottering around in a circle like a wind-up toy with a leg going crazy and the kind of back to a squat at the end. I know Dimple is a pullet, but part of me isn't going to be entirely convinced until I see a weird little Dimple egg lol.

And today I have seen the weird little Dimple egg! I guess it actually wasn't so little...not sure how she managed an egg the same size as chickens twice her size. Meanwhile, the Dimple dance continues, strutting intensifies, and something kind of almost like crowing happens occasionally (I didn't really expect normal crowing from a chicken that, depending on mood, either goes "ewbububu" in a cute high-pitched voice or sounds like a soprano howler monkey)

I thought it was just a weird first egg from Dimple, but I've seen three more so far and all of them are...dimply?? Very different texture to all my others chickens' eggs. This is a Dimple egg on the left and one of my others' on the right. 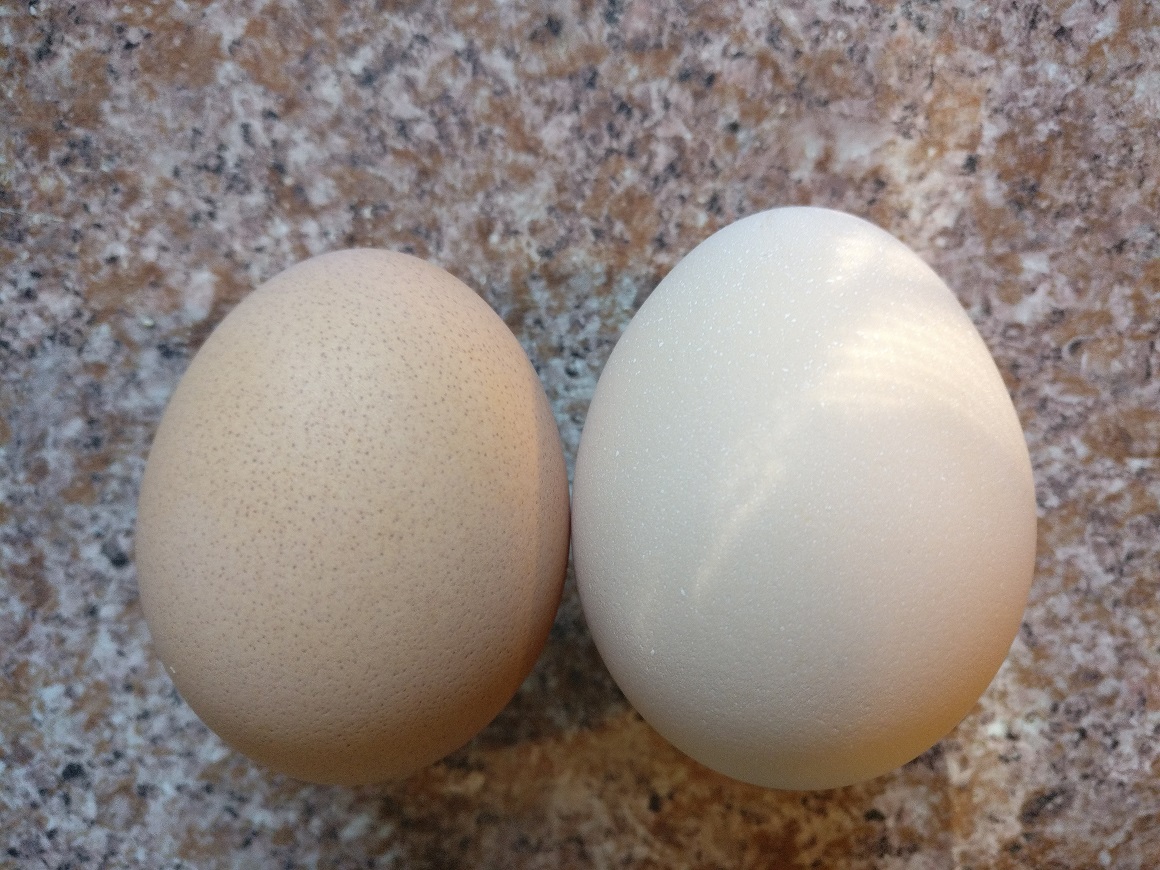 Thinking about adding a cockerel