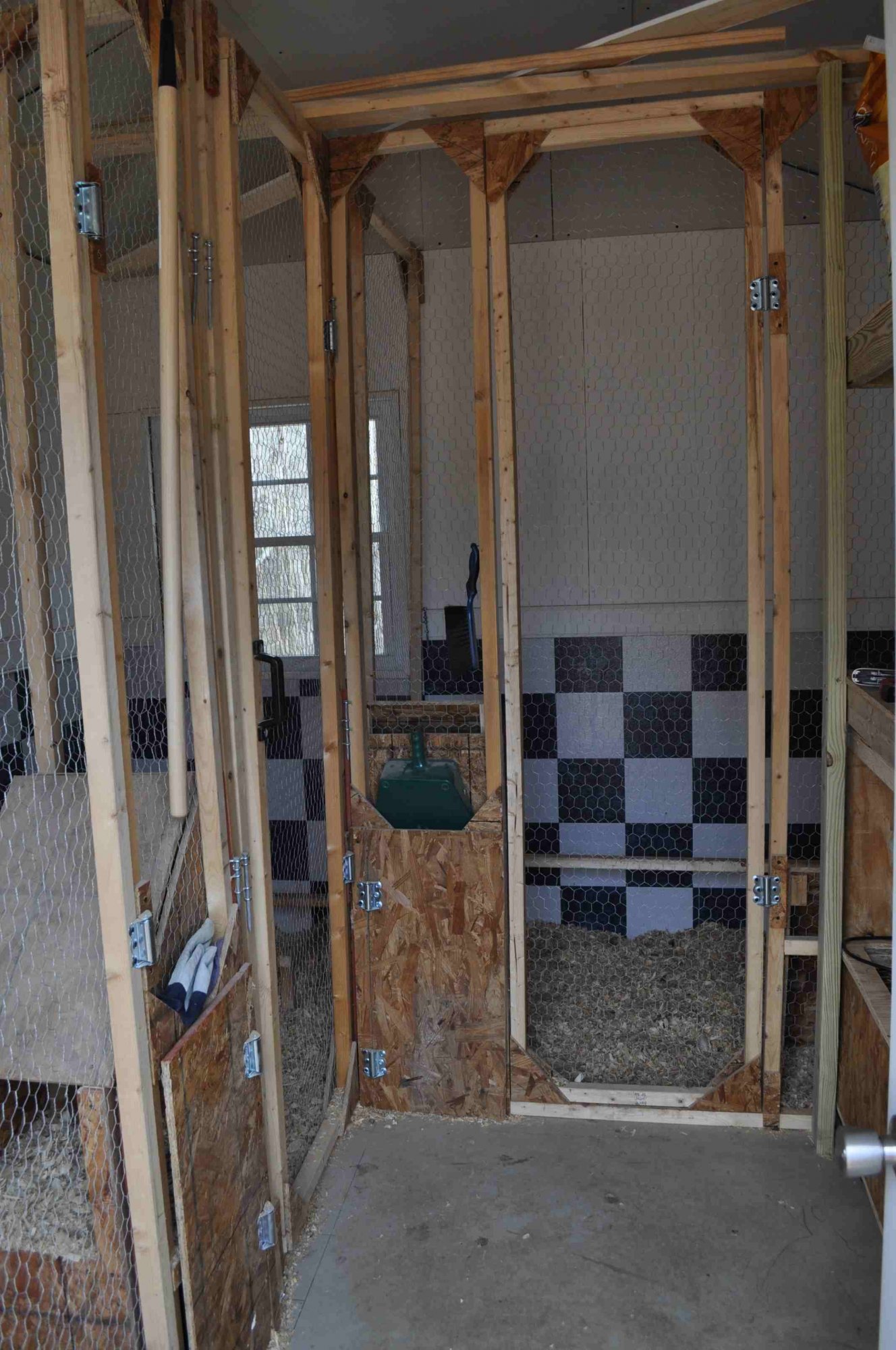 I believe it's time. Time to capture the epic adventure that is .... the Chicken Coop.

Really, I don't know what the hell we were thinking. It went something like this. "Hey, let's expand our chicken operation." "Yeah! We could build a 10x12 building from scratch!"

Uh, yeah. So we did. It took forever. It cost a decent amount of money. We did it during the hottest summer in a bajillion years, and it was hot as hell. It generated more than one argument. It required many, many trips to Home Depot. I learned new vocabulary and a lot about building, especially the fact that a 2x4 is not really 2" x 4" which is really annoying. But through it all, we survived and - dare I say? - are just about done.

We started with a concrete slab and put a drain in the middle. Took a chance on some guy who posted up on Craigslist that he did smaller concrete jobs (which is hard to find, by the way). He did really good work and was a nice man.


http://nordcliff.com/blog/wp-content/uploads/2010/11/Coop-1.jpg​
We then framed out the walls, then had a coop-raising party. Thank god for friends, is all I can say. Walls went up. Roof trusses were made. Shingles, insulation, drywall. Many, many screws. Thousands of them. Many ended up in the laundry. Trim. Interior panels, and chicken wire. Sharp chicken wire. Nest boxes and a roost, and trying to figure out how to make it all fit. But here it is.


http://nordcliff.com/blog/wp-content/uploads/2010/11/Coop-9.jpg​
We also thought we'd divide the interior into three smaller areas, so *in theory* we could run different flocks of chickens or perhaps have a brooder area. There are nest boxes that aren't nailed down (on purpose, for easier clean-up), and some face one way, some face the other because it's technically in the other area. There are hinged doors on the nest boxes to make egg-gathering easy. 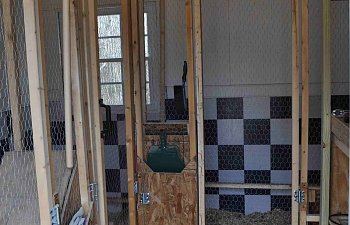 ​
Trying our hand at building a PVC feeder. We have since tweaked the design just a tad - this wasn't angled enough to keep the feed flowing.

http://nordcliff.com/blog/wp-content/uploads/2010/11/Coop-12.jpg​
Silly chicken. All this for a hen who isn't laying yet. Oh, make that 17 chickens. The 14 new ones we just got are just a teeny bit young to start, and our veterans were molting. Now we're getting 1 egg a day. SLACKERS.

http://nordcliff.com/blog/wp-content/uploads/2010/09/IMG_1079.jpg​
The finished product. The orange doggie door is really weld curtain slats I got from scraps at work. On average, 10 out of 17 have figured out how to go in there at night. We are still training the remaining silly chickens. The fencing you see is a series of 10x10x6 dog kennels we purchased slowly over the past year or so. They are interconnected so we can have different areas be open or closed depending on our needs. 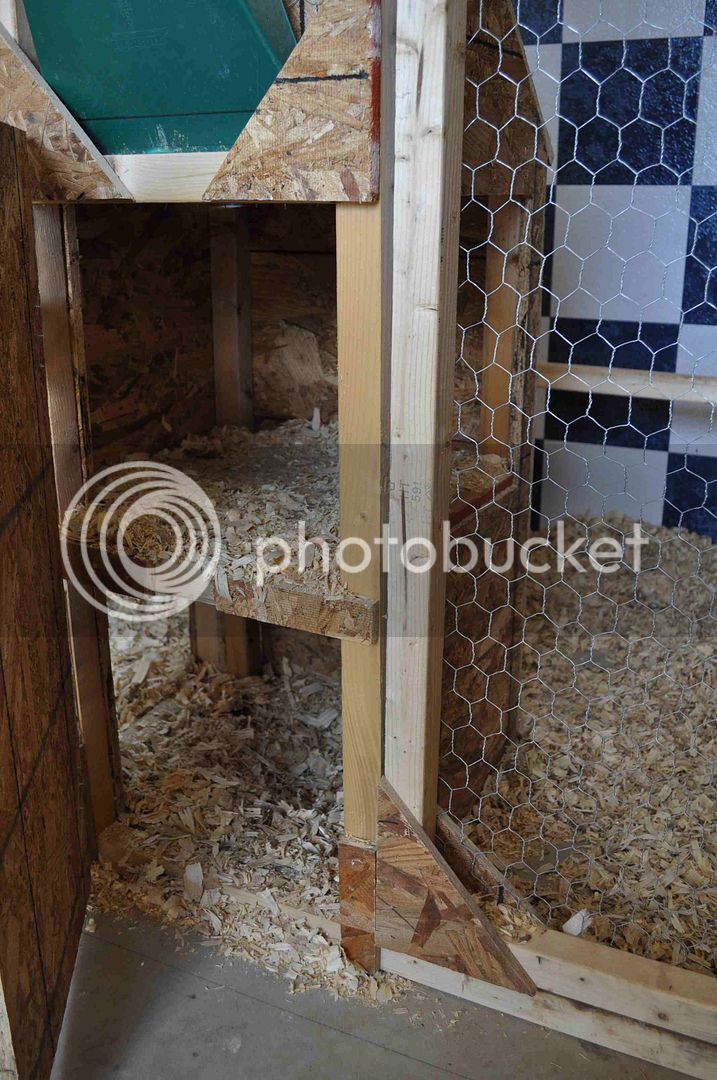 Our first attempt at the PVC feeder was wrong - it works very well with this shape. We ended up putting in a 45* angle piece that allows the feed to flow much better. 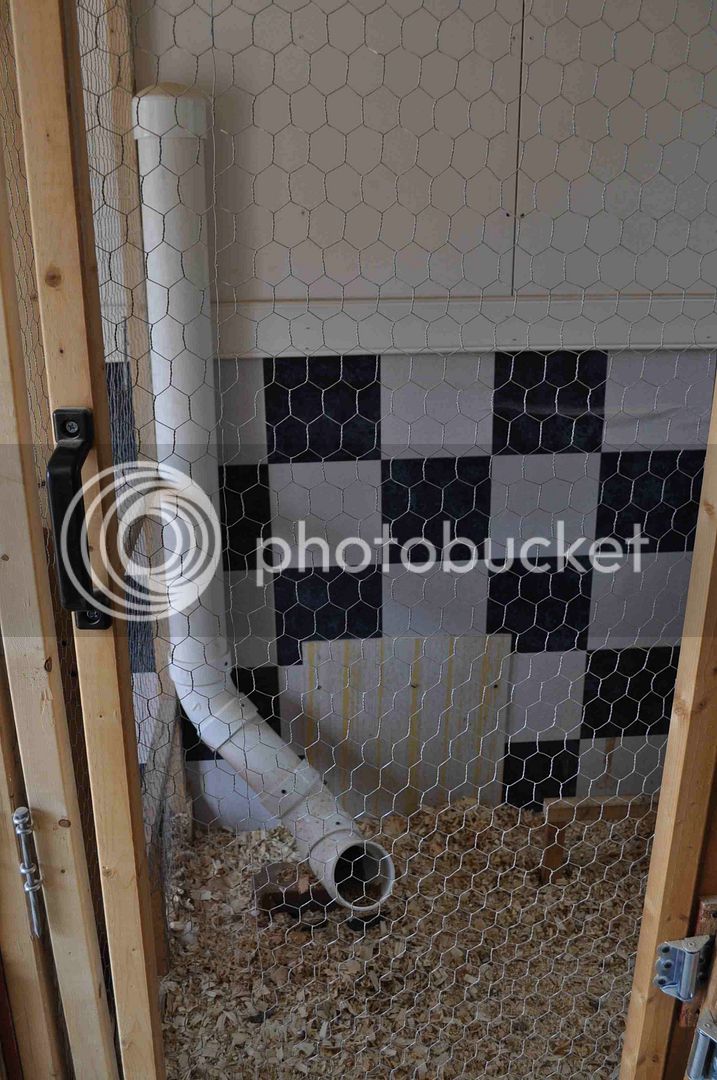 I have a workbench with an overhead shelf thanks to my dear, dear husband. Feed is stored in the blue barrel, and it's on a barrel dolly so I can roll it around. Once we clear out some of the clutter, I can put a 2nd blue barrel in there for pine shavings. 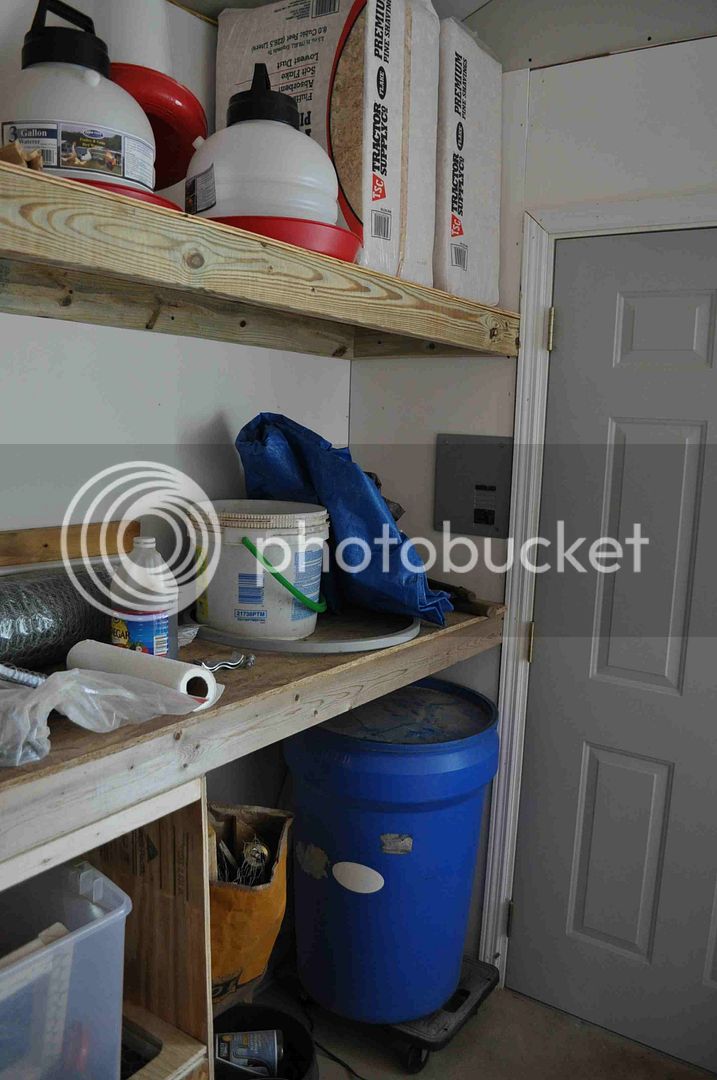 We have a brooder box that is sitting on a couple of the barrel dollies. The idea is I can roll it out to clean/feed/water, and then tuck it back in so although there's ventilation, there are no drafts. There's also enough clearance to adjust the heat lamp to whatever we need. When the babies get bigger, we can open up one end of the brooder and they can hop out into one of the 3 chicken areas. (Oh - I've got 20 babies on the way, should get here this coming week!) 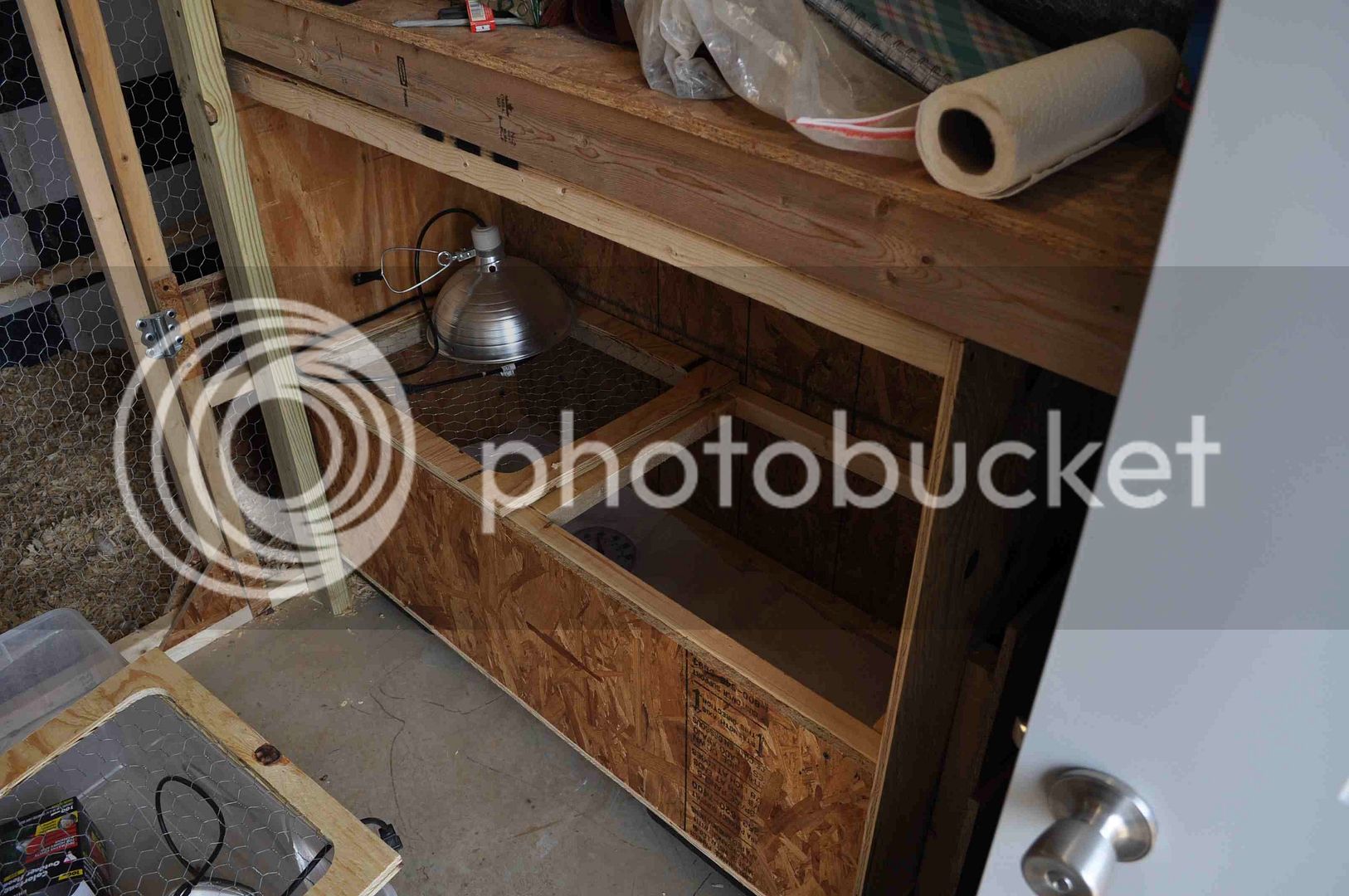 There are 3 pop doors, one for each chicken area. They are made with weld curtain scraps I got from work and operate much like a doggie door. The girls had no trouble figuring it out! We made some roost and that's pretty much it! 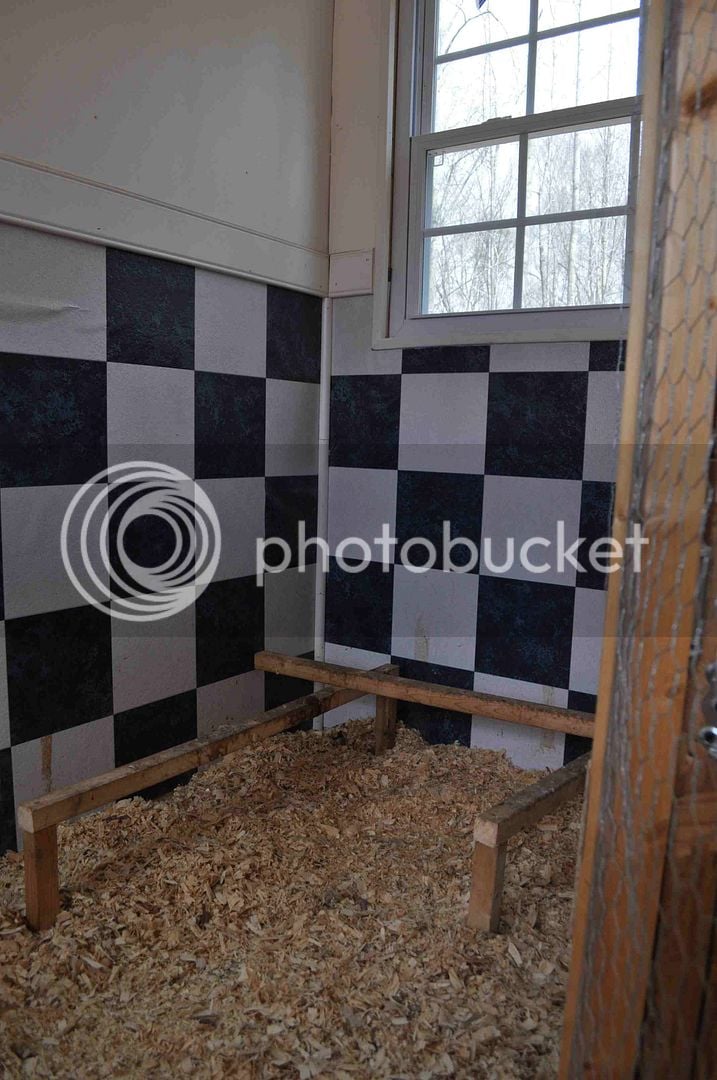 There are two windows in the coop so we can get a good cross breeze, and we bought an inexpensive window fan for later this summer.
Now I need to figure out how to make some shade. A work in progress!

Let me know when you update and i will re-rate
I love the interior design of this coop. The PVC feeder is definitely a nice touch, and that shape does look like it works better. The nesting boxes are really nice as well. A great feature of this coop is how the brooder is inside of the coop. That will make for good integration of new birds into the existing flock.
Read more…

very nice setup. im still in the planning stages for a coop and run