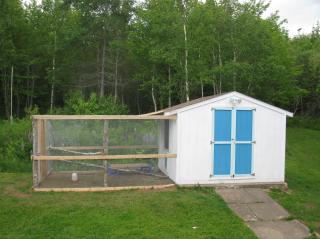 Coop MacLean​
cement slab was already there from a previous shed the has since been removed. We decided to put a 10' x 10' baby barn, shed style, in its place. My DH and kidlets were hard at work getting the building put up! We had planned on getting 4 orpingtons, four barred rocks, and four jersey giants. The Barred rocks are easy to pick out as are the buff orps. I was wondering however what Charlie (our black roo) is? Also cottonball, the white chicken, I was first thinking an orp however, she resembles the black pullet jersey giant?? Any thoughts would be greatly appreciated!)The 10' x 11' We built it off the gound hoping this would help keep the floor warmer in winter....
The shell is up Outside is complete - now onto the inside! We added a light and a couple of plugs inside the coop and used spray-in insulation where needed to get rid of any possible drafty areas. You can see the nesting box, makeshift brooder area (don't worry we got rid of all the wires now that they are able to get up there) Poop bar and roost they can use when they get bigger (They chicks roost every night now since they turned about 6 weeks old)
We used the first 1 1/2' inside the coop as a storage area where we keep their pine shavings, food, etc. We also found that this allowed us a chance to get into the coop without having to worry about the birds escaping. We used a screen door and only boarded up the bottom half of the wall so that when the weather gets warmer we can leave the doors open allowing for cooler air to move through the coop. Also we have two windows opposite each other which can open and a smaller vent on the back wall which can be opened when necessary. We put up four nesting boxes (of the 11 chicks, four are roos). My DH added a tree and a couple of little ladders for the chickens to get up to their roost in the coop. After checking out all the coop designs on the website we decided to create a poop bar as well. It has been working really well!! Inside complete!! We had kept the chicks in our basement in a large fish crate for the first couple of weeks but they were quickley outgrowing it so we sectioned off a corner inside the coop to give the chicks a little more room. The fence outside is now finished. My DH made the poles from trees off our land. The fencing around the coop is buried into the ground to deter any preditors from digging their way in and we used 1/2" wire the entire way around. There is 1" chicken wire on the roof of the run moreso to keep the chickens in and birds of prey out. For the time being we've tacked plyboard on the roof to give the chicks some shade and shelter if it rains, however, we intend to put a more permanat roof on - one that can withstand strong winds and lots of snow

We added a couple of trees as roosts in the run and a double door for the chicks to come out of. The inside portion was added as extra protection from preditors and to cut down on any drafts from the outside. The outside door drops down so that it doubles as a step for the chickens as well. Charlie chillin on a roost The chicks first adventure outside! They've completely cleaned out any grass that was in their run!!
Our chicken coop! Meet the clan! (Clockwise from the barred rock in the back) Webster, Isabelle, Charlie, Jim-bob...... I was told that Charlie was a Jersey Giant chick but I think he's something else - looks to me like a bantam of some sort - any ideas?? I included a pic up close (see below) (Clockwise from the Orpington in the back) Hollywood, Webster, Charlie, Jim-bob, Isabelle, Cottonball, Hannah, Marigold, June, Loops, and Emma Nice and spacious.
Bonus of having that slab already there.
While more measurements/details about the build may be nice, photos speak a lot. It's a basic shed build which anyone can find plans for online, it's just been outfitted with nesting boxes and roosting bars for chickens.