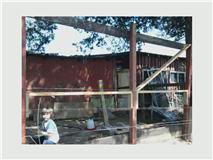 When I got our first chicks almost a year ago, who knew I'd actually fall in love with them? Certainly not me! It was a whim that we even bought them. I moved my kids here to East Tennessee to get them away from the overwhelming bustle of the Annapolis/DC lifestyle. Having grown up in Pennsylvania myself, living in Maryland was never on my list of things I liked all that much. Once I had kids though, I relized that kids should grow up being able to run and play freely without the danger of traffic and drive by shootings! So we moved here to where my parents have lived for nearly 15 years. MUCH BETTER for the kids to say the least. (sorry for going off course)
ANYWHO.... i purchased a small "crate" that was made by an older timere in the area with a wire bottom and some sort of heavy duty lattice for sides and top. It's not real small, but not huge either making it very mobile for me. I think it measures about 18inches wide by about 30inches long by about 18inches tall and has 3inch legs under it to keep it up off the ground. My master bathrrom has a VERY small shower stall which I do not use due to my closterphobia so I ave rubber made totes stored in there. I have set the "crate" on top of those with the heat lamp hanging from the shower curtain rod and the shower curtain to keep the heat inside and I use that as my "peep house" for the babies. It works wonderfully. I keep paper under the "crate" and it slides out and back in very easily.
I asked my dad (who is a master carpenter and building matreial "collector") to make me a safe box for them outside as they grew. He ingeniusly used 4 old interior house doors and made a long box for them using wooden window shutters for the short ends providing ventilation. He hinged the top door to the back door and installed a latch to hold it closed. Those peeps were in their glory to move in. I put chicken wire over the top (but under the lid) so I could have it open for them in the day. It was a coop and run all in one! But they got bigger (whoknew?) so, the "cat house" shed (yes an entire shed devoted to 1 farm cat) became my target. The large window in the front had been broken years ago and my dad had stapled chicken wire to it to keep the roudy neighbors out. We took down that chicken wire, and literally passed the large door made box through the window and placed it long ways along the back wall of the shed. Cut a hole in the shed wall and fenced in a small 2x2 area inside the shed at the end of the box. We removed the shutters from that end so they could go in and out whenever. We gave them a ramp (also a wooden shutter) to the yard outside. The yard was living quarters for a rescued potbellied pig my mom got when she first moved here, Wilbur has since gone to join the circus and is touring Russia so it was already fenced in, I just had to replace some broken areas and attempt to enclose them from above the best I could. Needless to say, as many of you know, I failed in this attempt as a neighborhood stray got each and every one of them. Hubby and I have recently built "The Fowl Fortress" and I'm trying to figure out How to build more "interior" space for the new chicks we just got. Since we are alreaqdy incroaching on the cat's space, I'm thinking of making the nesting boxes from inside to protrude out into the "yard" of the fortress and access from inside. Here are a few pictures I have of everything and I will add more as I come to a conclusion on how to do it. I would like to mention ALL materials, down to the screws and nails are salvage from my Dad's "collection" while he was away for the weekend! Just proving that there is more than 1 way to clean up a mess!! I will go out and take pictures from inside the shed of the box once this storm passes. If I could change anything, it would be that this was initially attatched to a wooden building already set up inside to house the birds. But we'll overcome this soon. 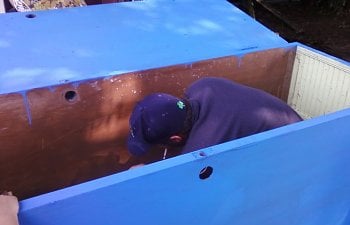 Here is my hubby inside the chick box making sure its sealed from the inside. Made with 4 28x30 interor house doors and 4 wooden window sutters. 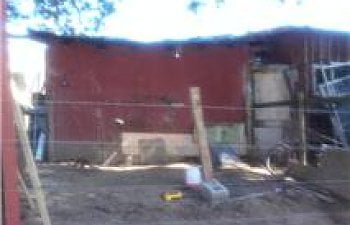 The "yard" and the back of the "cat house" this was initially enclosed with chicken wire. That is indeed barbed wire that the 2 cedar trees on either side have grown around, so we left it as further deterant to predators. 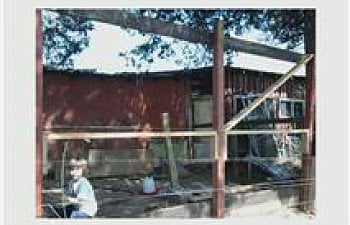 My son "helping" we attatched 4x4's to each cedar tree to make sure it is sturdy and secure, and framed it in with another 4x4 in the center. The 2x4s between the 3 4x4's are for stability as well as the 2x10's as the headder and footer. My hubby put diaginal supports on this side firstly to give extra support for the fencing, secondly to give it "mean eyes" to chase away undesireables. (he's got a strange sense of humor) 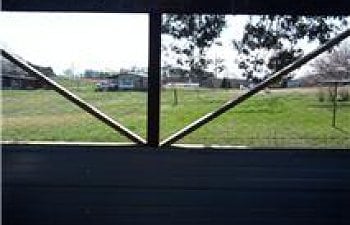 This is the above first side completed. We used 4x12 sheets of steel shed siding along the bottom attatched at the cross support boards and footer boards, we then buried the bottom under about 6 inches of gravel and dirt. We stretched a continuous piece of standard chicken wire from the cross boards to the headers and left some extra over the top for when we add the roof. This is looking out to the fron of our property and the road. It is under cover from 2 very large cedar trees as well as others long the side. 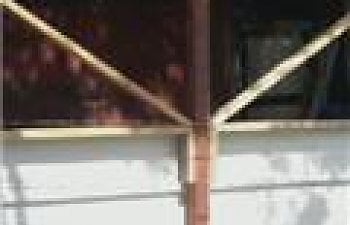 An outside view of the above wall. I'll be planting tons of plants along here to make it pretty. 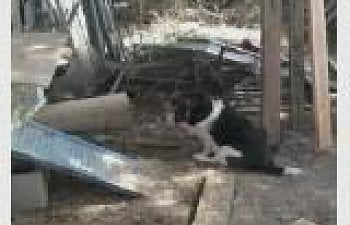 This is my Dad's dog Sadie, staring at the door way into the "cathouse" we had the silkies closed inside while we worked and she sooo wanted to "play" 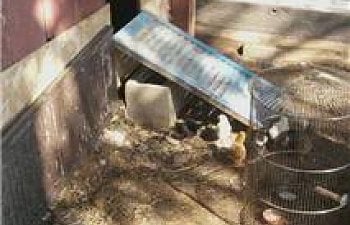 The new chicks we just got this weekend enjoying a bit of freedom while the antisocial silkies hid inside...this shows that the shed really isnt in good repair, but it works for the chickens and the cat. Notice the use of the wood shutter as the ramp for them to go in and out. 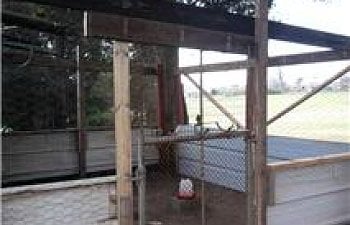 The completed fortress, we used a gate that was laying around that had been modified to be taller, we just adjusted the "header" to meet the top of the gate. We still need to add the roofing which will be the same steel shed siding. But the sides are nearly 10ft tall. 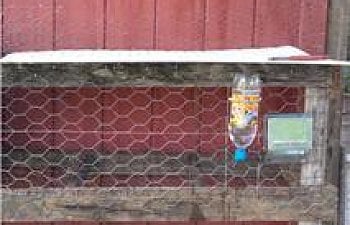 This is the bunny hutch we just put together last week on the side of the same shed. The "house" part of it did not make the picture but it's the entire width of the shed. This is sort of what I want to do for the chickens, although completely enclosed with hinged doors for access. I have to figure it out to accomodate all these chickens, I had absolutely no intentions of having so many and once they get older, I may thin the herd according to sex. I do not want any bickering between boys.

Was the coop ever finished? An update on how it went would be helpful.
Your coop trial number 1 looks way better than mine. Great use of recycled materials. Hope your girls are enjoying the coop. Thanks for sharing your story and the pictures with us.
Read more…