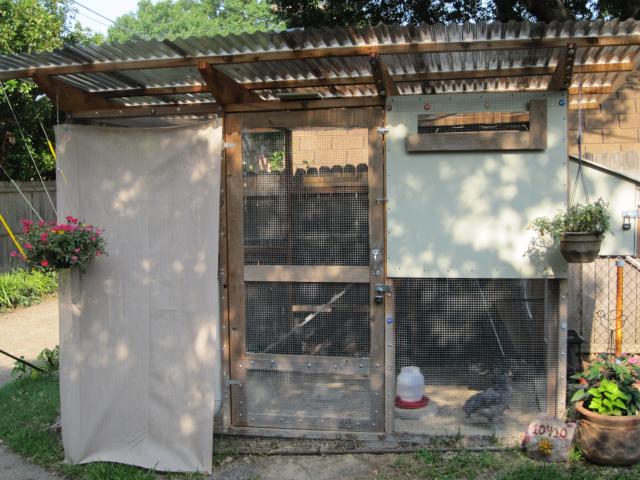 Welcome!
I purchased coop plans online and then got to building around May 2010. My coop is very urban in the Lake Highlands area of Dallas, TX. All of my neighbors are older folks and many had chickens in their younger years.
The plans I purchased were for the "Garden Coop." I was frustrated at not finding many pics of this coop built online, so I decided I would help others that were considering building this coop from the plans. My pics are not step-by-step, but you can get a feel for the way things came together. I would highly recommend these coop plans. They were easy to follow and were an accurate estimate of the materials I would need for the job.
First, I picked my site. The only spot I had was near the alley on a sloped piece of grass. I set the cinder blocks and checked to make sure they were level. I built the frame out of cedar. The incline made the rafter and roofing very difficult to complete. Instead of "wrapping" the hardware cloth around the structure, I cut out carefully measure pieces and covered each area separately. The hardware cloth proves to be unwieldy when you have long lengths of it pulled out. Instead of poultry staples, I opted for screws with washers. When I ran out of washers, I started using beer bottle caps. The ground was compacted with pea gravel and proved difficult even getting the cinder blocks in so I chose to use a hardware cloth apron and not dig a trench. My neighbor surprised me and laid down rebar with stakes to hold the apron flush to the structure. I also used 8" stakes to hold the apron down. I still have some stakes to put in, but you get the idea. I plan on using sand in the coop and run. I also "went rogue" on the plans and decided to change a couple things. The pop door will go on the wall of the coop and not the floor. I will also opt for putting the nest boxes on the side of the coop and not on the floor of the coop.
The picture below is pretty much where I'm at on 9/10/2010. The summer just got too bloody hot to be outside working. The coop only gets about 2 direct hours of morning sun before it's shaded by the oak tree. The area between the roofing and hardware cloth will be perfect to slide in a box fan when it gets hot outside. Well, it's been 6 months since my last update and I'm almost finished. I have everything done now except for the pop door. These pics are from 3/3/2011. Looks like this project will have taken me a full year to finish. As you can see I used sand in the run. Some daffodils and iris bulbs still came up in the run. I'm sure those will be gone when the chickens arrive. The floor is made up of 2 pieces of plywood painted with porch paint. The wall panel on the left opens up into the run. I'll be installing the automatic pop door on the right wall panel in this pic. The roost is a 2x4 that will run across the coop. I just don't have it in this pic.
Update 5/19/11-I removed the sidebeams that I intended to hold up the roost. I had wanted to be able to remove the roost bar easily, but the chickens were roosting on those sidebeams. After having to move them for 3 nights, I decided the beams had to go. I have a removable roost that I made in there now. 4/3/11
I constructed the ramp this weekend. It needs a coat of porch paint to protect that plywood from warping. I'm going to dust it with sand after I paint. The sand will add traction to the ramp since that porch paint finishes quite slick. I also installed the pullout box and tucked in the battery and timer for the automatic door. No problems so far! I finally got my chickens on 5/6/11. I now have (in order below) a blue copper marans (that's Liz Lemon), a blue ameraucana(Amy Farrah Fowler), an olive egger(Penny) and a cuckoo marans(Helen... as in Mirren, cuz she's a busty pullet). They're all about 8-9 weeks old at this point. I've also made an adjustment to the coop. Because of a thread on the forum, I decided to put some hardware cloth closing up the small area above the coop. I didn't do this for the other 2 areas above the run. Some BYC'ers said that that small area could be accessed by raccoons and they could scare the chickens. I'm also getting a box fan to slide in between the rafters. It will fit perfectly. 6/8/2011
Temps here in Dallas, TX, are getting in the upper 90's now. To provide more shade, I purchased some shadecloth from Home Depot last week and cut a piece to cover part of the front of the coop. The product I used is made by a company called Easy Gardener. It was easy enough to cut and they have plastic grommets so you can easily hang on hooks. I was thinking about buying these plans. It looks like they came out really well for you. Do you have a lot of experience building stuff? How were the directions? I really like the rebar and stakes to hold down the apron. Where did the stakes come from? As in, what aisle at Home Depot/Lowe's/Ace? Congrats! It looks wonderful. I am in Tucson where it gets 100+ during the summer, so I need lots of ventilation, too. I like the idea of the box fan!