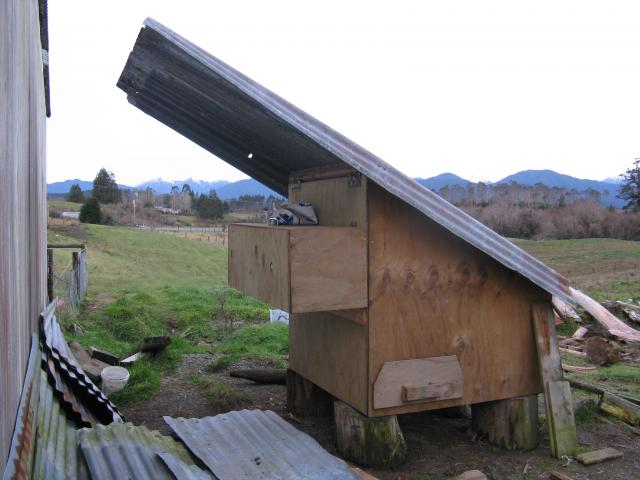 Free chook house and almost free chooks.
​
This house was made from rubbish: Anyone can see that there is plenty of rubbish left over.
Notice the hindges above the nest boxes to tilt the roof.
Also the pull handle on the sh.1.t box. It is sheltered from the most dramatic weather by the shed behind it. I can easily lift the roof with one hand and pull the string with the other to lift the propps up to hold the roof up. One hand to lift again and the props hinged at the front, fall down so the roof can be lowered with one hand. Inside:
The access to the nest boxes is uncomfortably low to discourage pearching on the entrance and soiling the nest boxes over night.
The pearch is higher one end to assist with the pecking order.
The grips on the climbing boards are plastic half inch hose stapled on.
Now the birds would have no trouble getting up and down but when they were new to me they were bare assed misserable looking things.
I lifted them up many times but they manage themselves now. A feeding contraption. The weight of a hen easily opens the lid. It took the chookies no time to learn it.
It took me a lot longer to figure out why it seemed to fall to bits until I saw what they were doing. Peck. Peck. Followed by a compulsive scratch.
All the outside is metal. Once before I had chooks and the wooden and plastic versions I made were broken into by rodents almost over night.
The sparrows still visit to clean up but I am not supporting a huge collony of them as I would if there was only an open trough. Similar problems here with the drinkers. Elegant dipping of the head, thrown back to aid the swallowing; then the foot work.
These reservoirs are here and there about the range. This nest box lid stay swings down to the propping position shown in the photo as the lid is lifted.
When the lid is lifted further the string atached to the lid and going around a bolt at the bottom pulls the prop
out of the way. The small hinged block holds the stay out of the way as the lid is lowered but eventually the prop
pulls the string through the staple to generate slack for the next opening. This is neat for gathering eggs one hand
always free to hold the egg container. This is an old water pump house. It gets the morning sun and is the hens day house. Sunset reflecting on the mountains behind the day house. The chookies do not realise it yet but they are going to learn to play on the swing. Lots more feathers now.
These chaps came from a commercial farm. Free range in as much as they were allowed outside into a muddy padock. Were not
de beaked or de toed.
The poor things. There was a large wood hogger mulsher at their place aimed straight into the pig pen. I bet that would have been where they
were going if we did not get them. They cost $22 for the six which is free, really. It took four hours drive to get them home but they all made it. In the morning they
had laid four eggs one of which was broken. They did not want to go to bed at nights. They wanted to stay up and play like children. It was ammusing to see them pass blades of grass one to the other.
Their plumage has improved steadily to the point that some unbalancing of the flight feathers may be needed. Because of the abundance of green grass
for quite a while many eggs were soft shelled.
It is easy to understand why the commercial value is not in these any more. Some of the eggs weigh over 90 grams. New Zealand large eggs are 65 grams each.
When they were commercial layers they would have had a laying diet. No nutrient for feathers. That would be a non proffit waste of hen. With the extra food these guys
have now they have not gone off the lay yet and we are a month passed the shortest day. They were about 13 months when we got them in Febuary. Yesterday and the day before they were 100% six eggs from six hens.
If it gets really cold now even the longer day light hours won't stop them taking a rest from laying.

Thank you for sharing
Nice article about repurposing scrap to make a coop!
Read more…