My 6X12 mobile chicken build on an old boat trailer

Article Reviews (5) Gallery
Leave a rating
June 2019: I built a 6X12 gambrel style shed chicken coop on an old boat trailer frame. Here is a shot from the left side of the coop and part of the 13X13 attached run which is covered with bird netting. I have not yet put in the outside door for the nest boxes. The nest boxes will be internal, but the outside door will provide access to the nest boxes inside. I spent extra money for the 24X36 sliding window (both sides) because it saved me a lot of time and I just really liked the idea of the screen built in. My wife was a bit jealous that the chicks got new windows when there are a few things on her list that need to be purchased. But I got the windows on sale for about $35 each and I had some rebate coupons and military discount at Home Depot, bringing the take home price down to less than $30 each.

Right now the coop is in my back yard, but I will be moving it up closer to the house for the winter months. I live in northern Minnesota, and I don't want to be hauling water out to the back yard. Also, I plan on using a heated water base so the water does not freeze (as fast). I will need access to electricity for the heated water base and for lights. 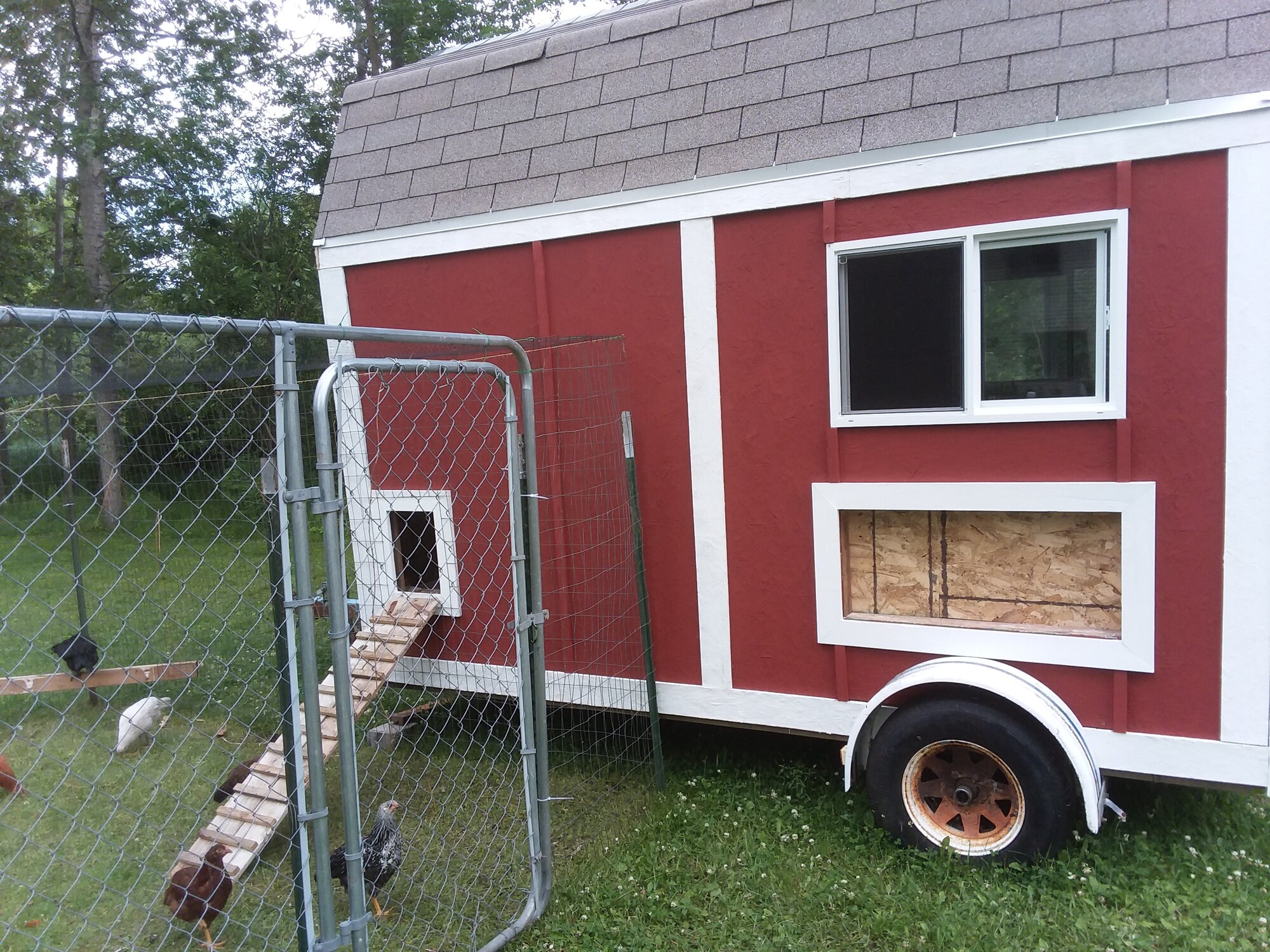 Here is a shot of the front of the trailer and coop. Notice the high gambrel roof which I hope will be better for ventilation for the birds this winter. I put a register vent on both the front and back, up high in the roof. I hope that will be enough ventilation along with the sliding windows on each side of the coop. If not, I am thinking about adding an electric bathroom fan to force ventilation and humidity out of the coop.

The coop build got much heavier than the boat I used to have on it, so the front tongue jack is not strong enough to lift the front of the frame. I use an 8 ton bottle jack to raise the tongue when I hook up the trailer to the pickup. Also, I have since put bricks under the tongue frame itself so all the weight is now off the tongue jack. 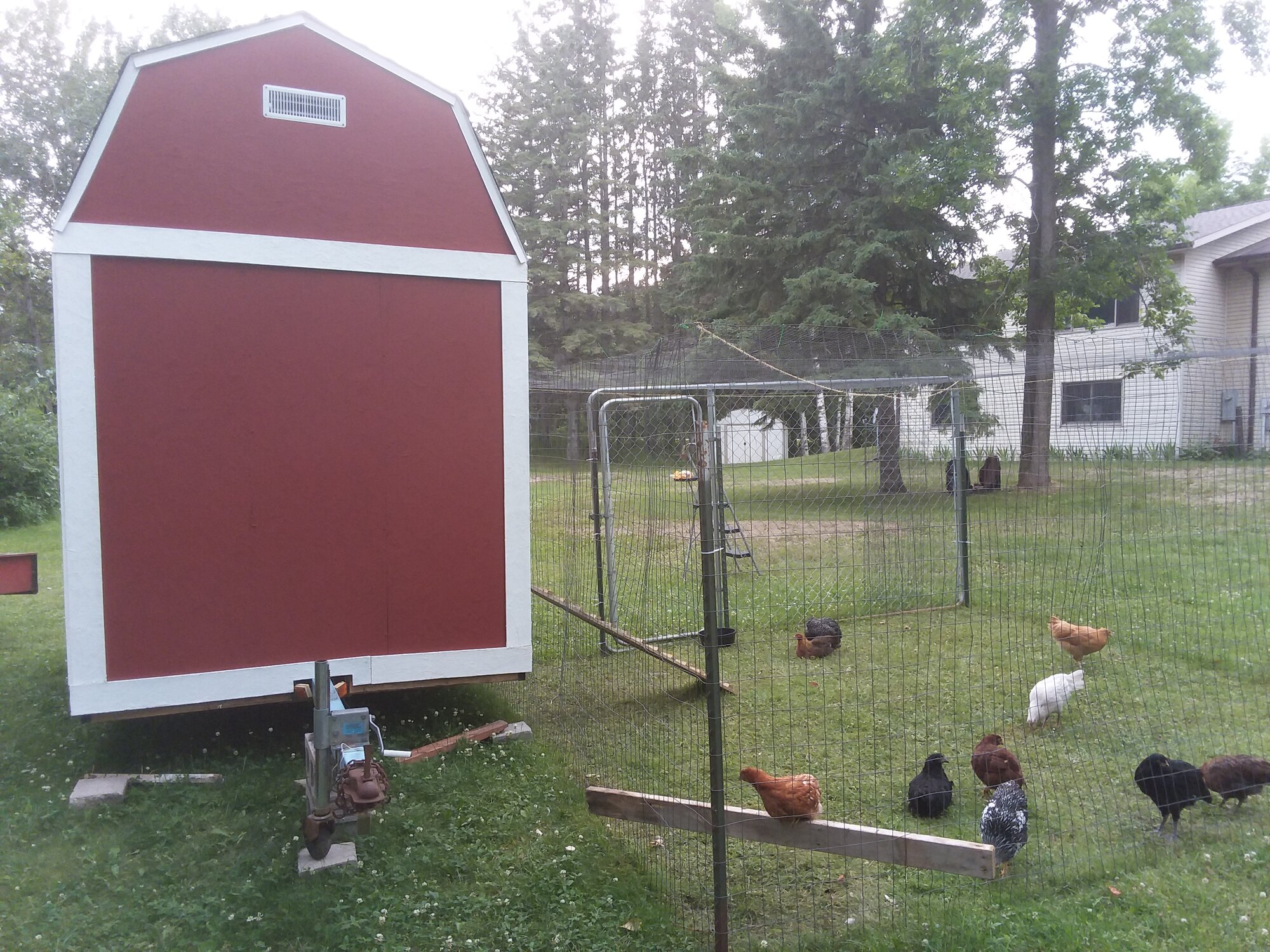 Here is the right side of the mobile coop, same as the left side except without a pop door. I am thinking about adding a pop door on this side next year along with another chicken run on this side. Then I would just rotate the chickens from one side to the other to keep the grass growing in the chicken runs. I have also framed in another spot for an outside door to access to internal nesting boxes. It's a mirror image of the left side on the coop. 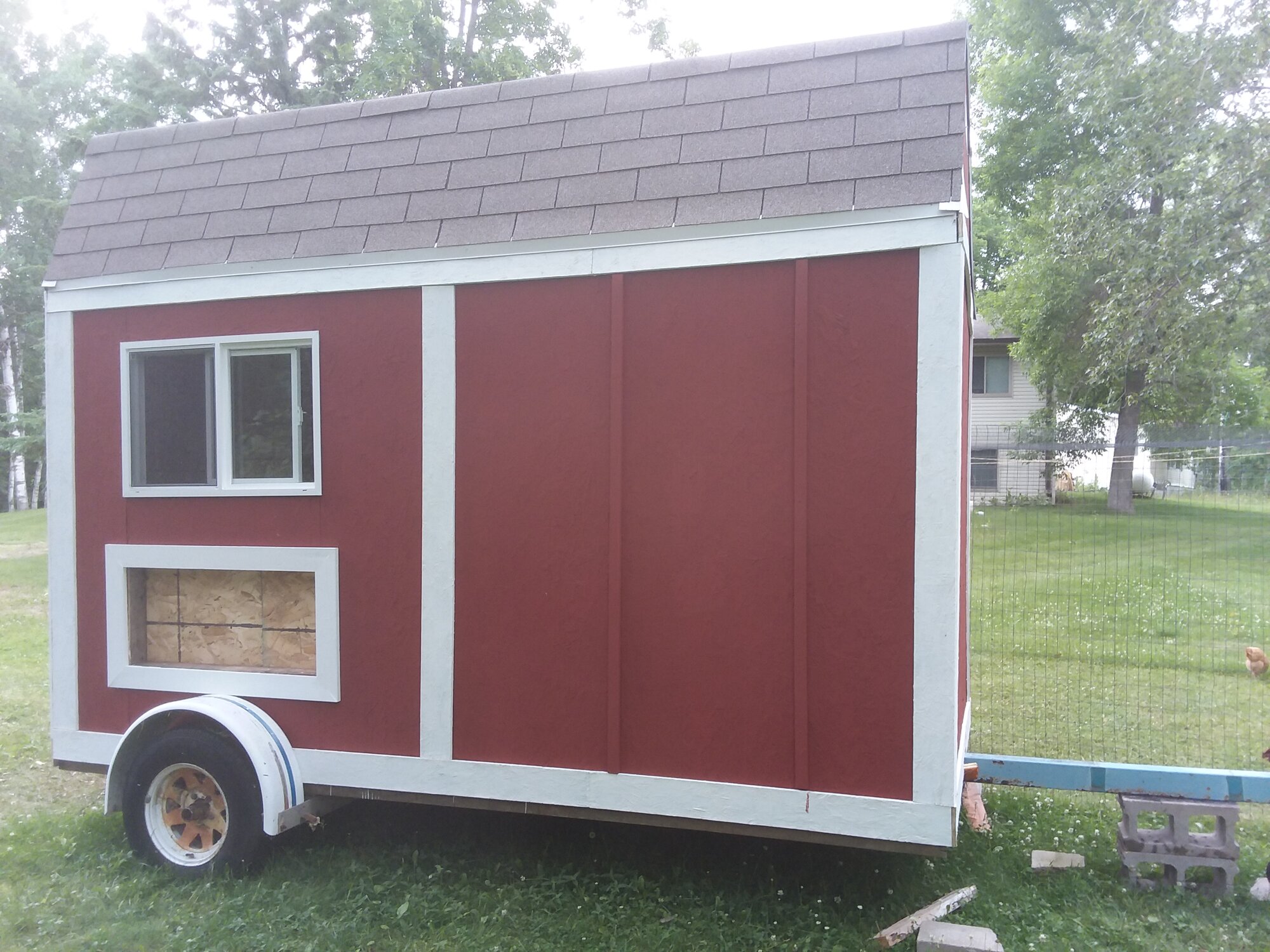 Here is the back (working) side of the chicken coop. I have borrowed some design ideas from YouTube videos by Carolina Coops. You can see I have a deep litter door spanning the width of the coop. This can be dropped down and the litter can easily be shoveled or swept out into my garden carts or yard carts that I tow behind my riding mowers. The two larger barn style doors open wide and let me have free access to the coop. I originally had planned on adding additional ventilation windows on removable hinges (a la Carolina Coop's design), but I ran out of time on my build and the chicks needed to get out of the brooder. Those additional ventilation windows are still on the list, but have been bumped down in importance. 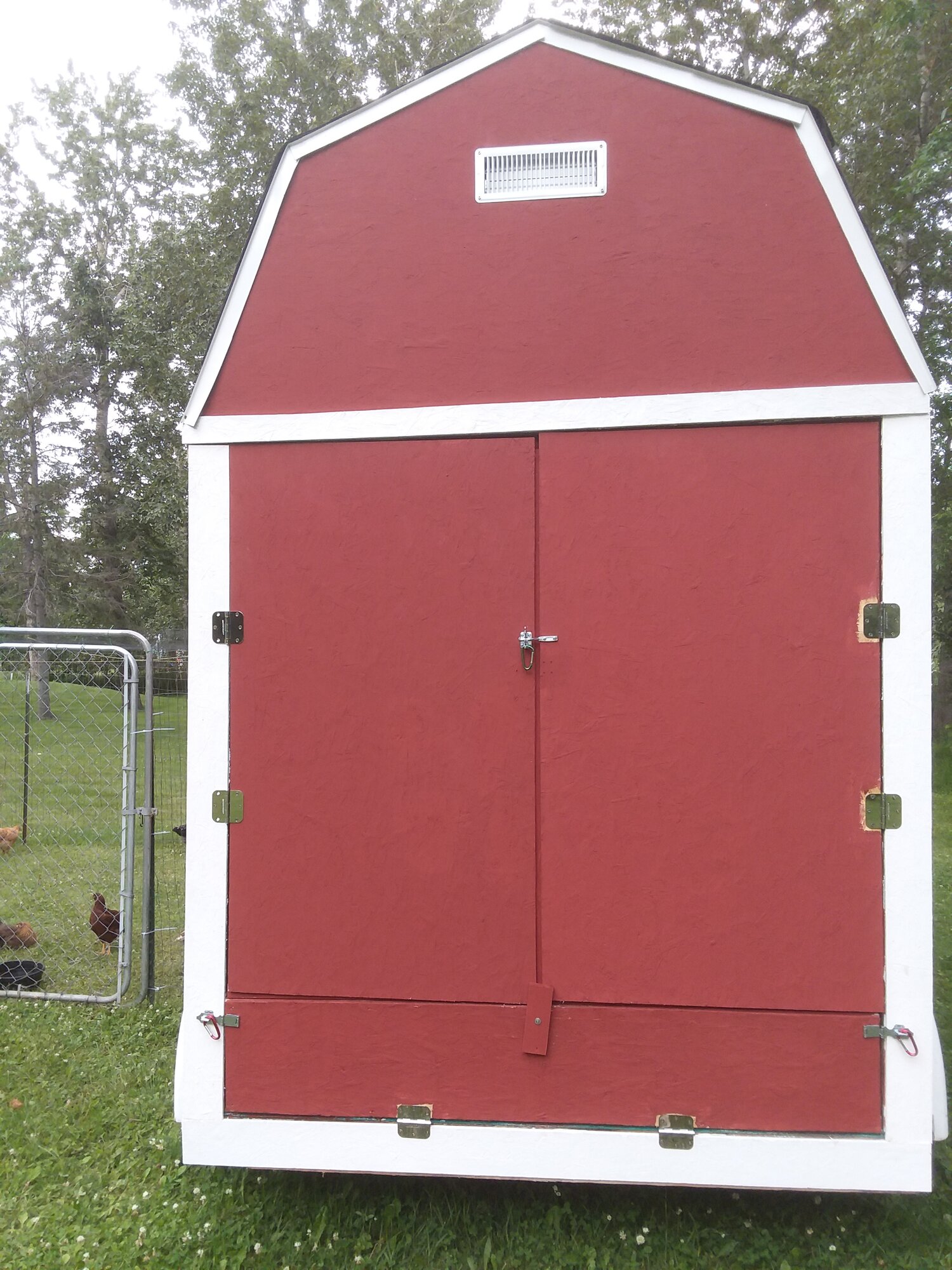 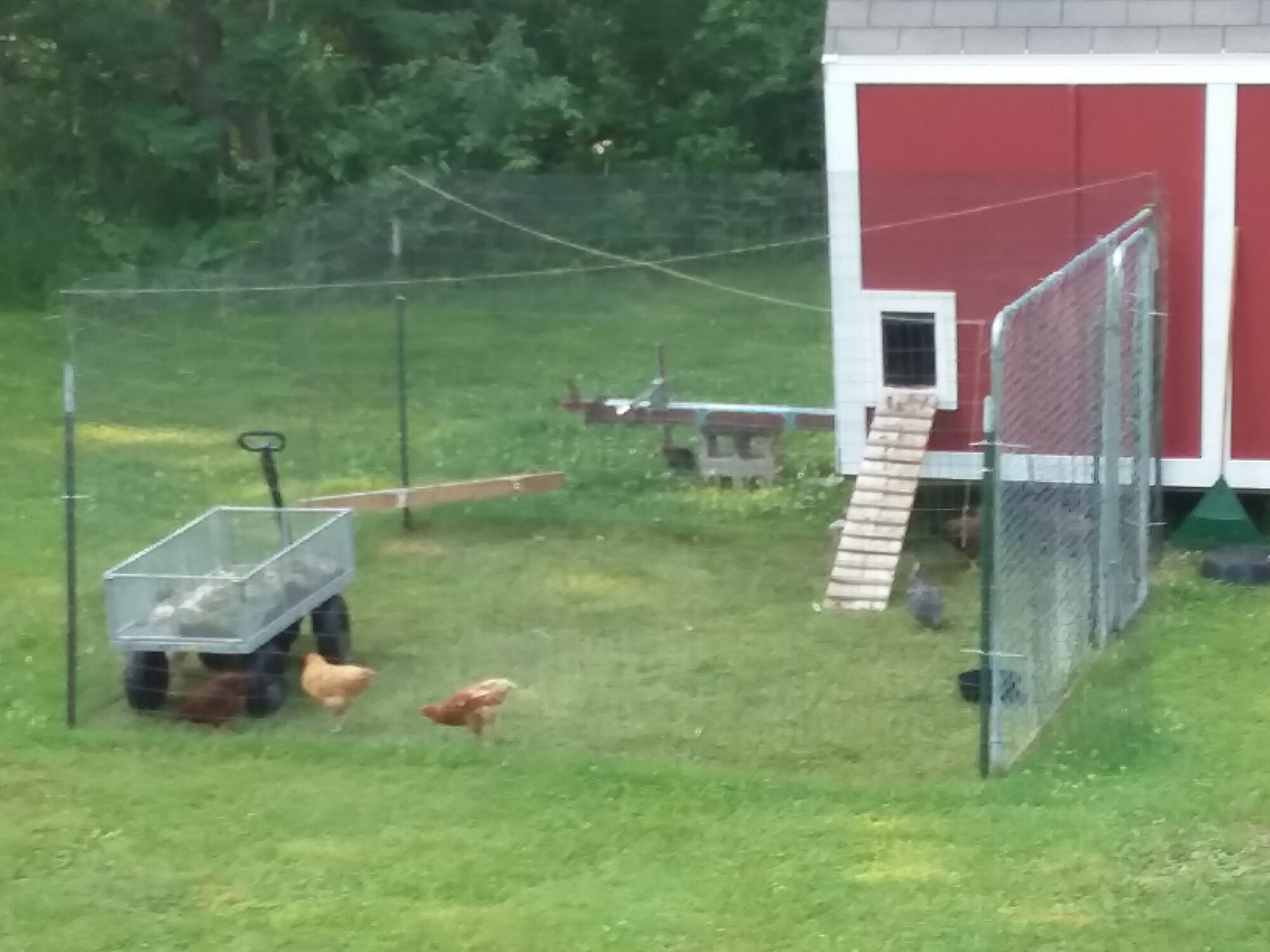 I ended up dropping one of the side panels on the "mobile compost pile" and using that panel as a ramp for the chicks. It only took a few minutes after that for the chicks to get up there and start digging through the good stuff. My goal is to have all sides up on the cart, so when the chickens scratch through the pile, it does not get scattered all over the ground. For now, this is working out great and the chicks love searching for food in the pile. Another benefit to this cart is that it provides shade and shelter underneath. The chicks love hanging out there in the shade on a nice sunny day. 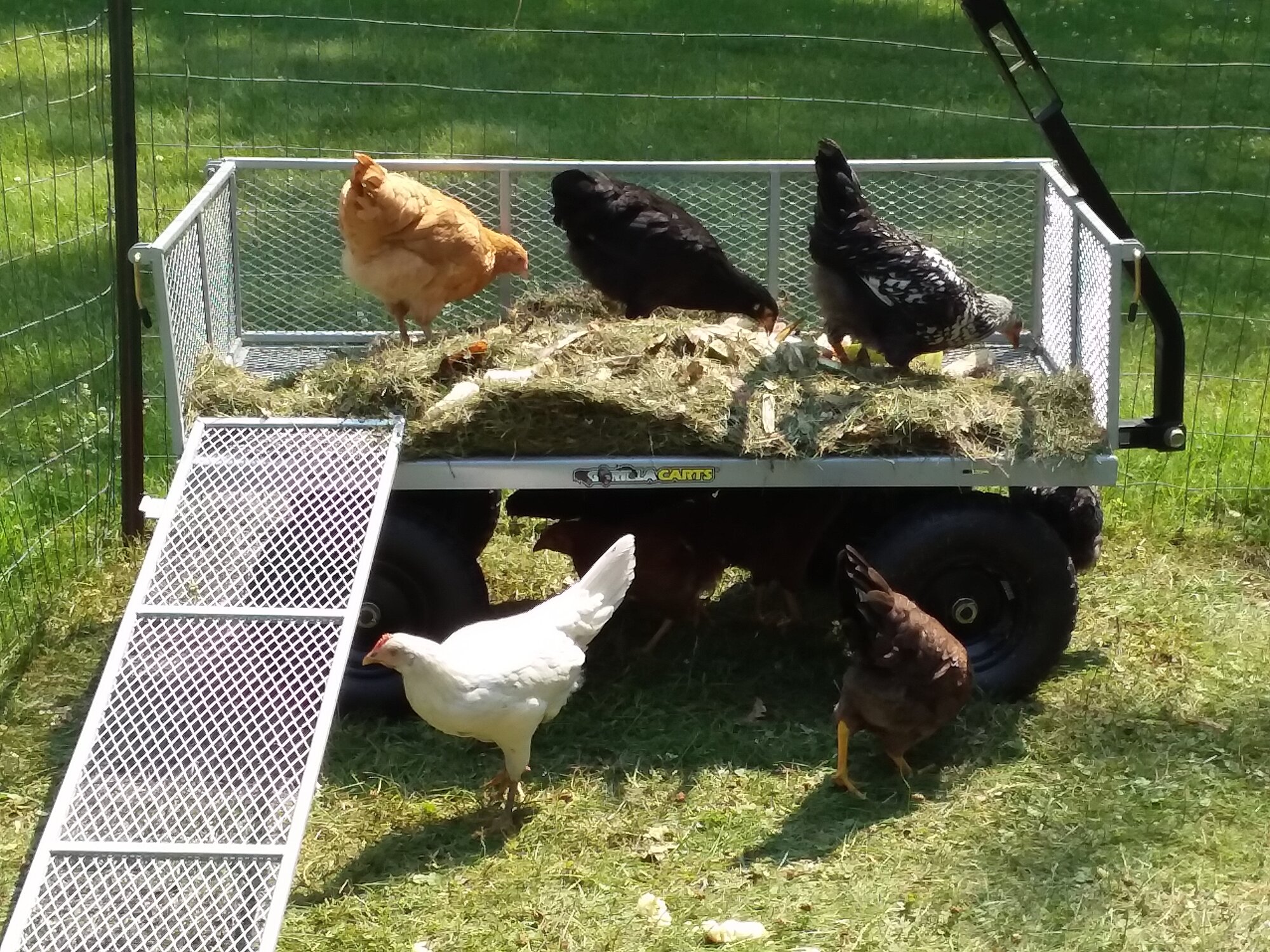 Here is a side shot of the mobile coop showing the 24X36 sliding window and the outside nesting box access door closed. 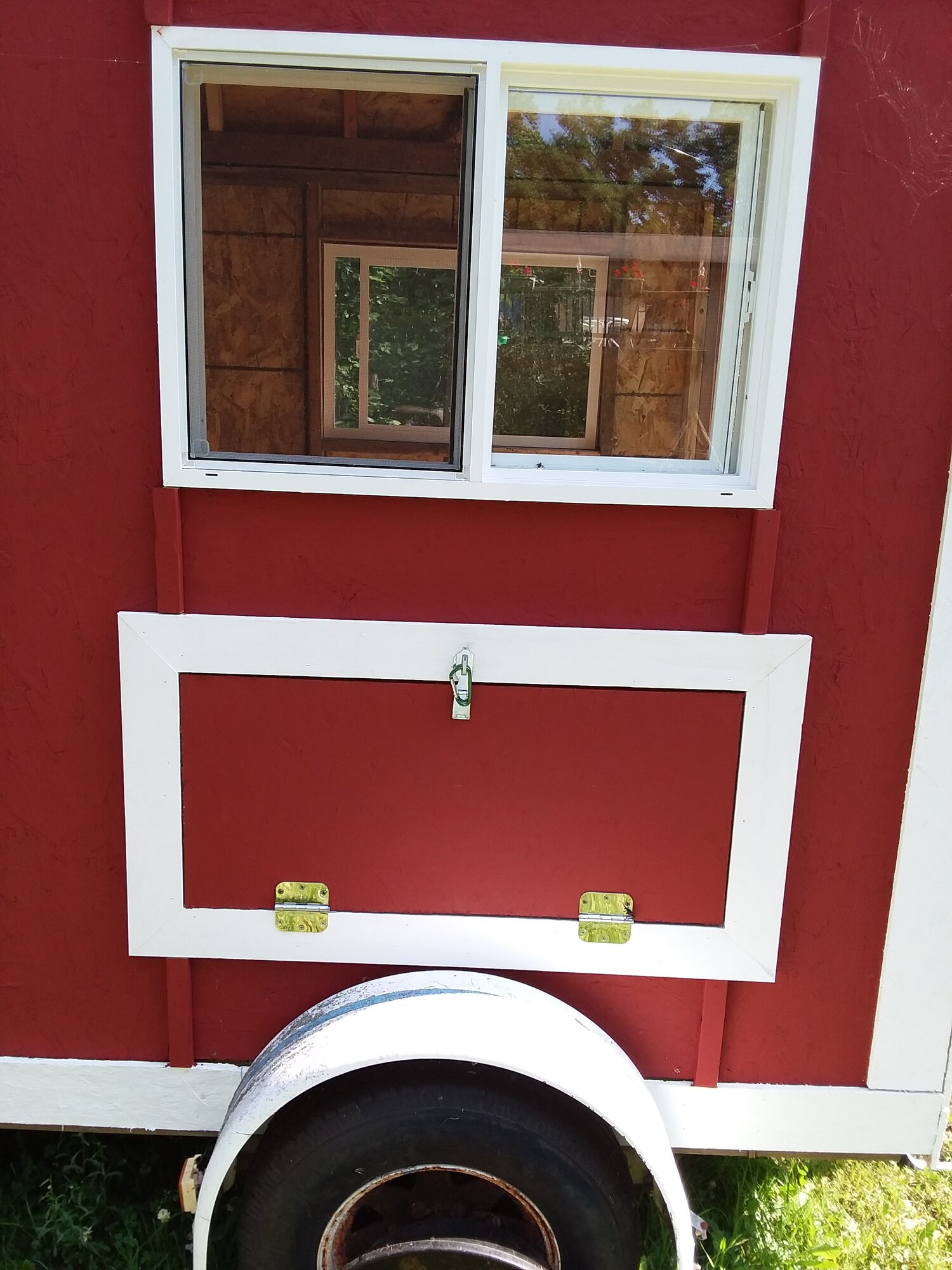 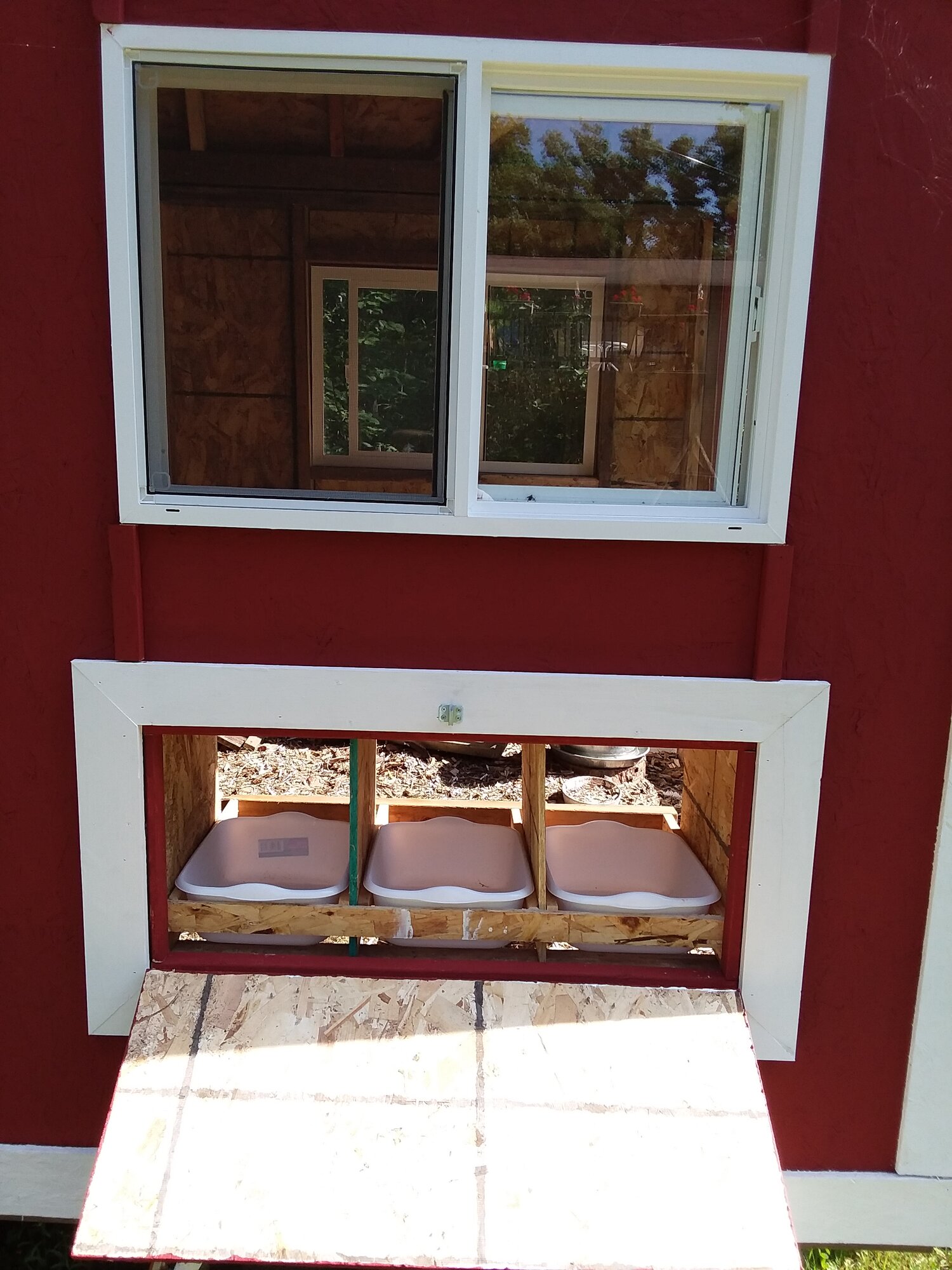 And a closeup look at the removable dish bin on rails nesting box design. The bins are in there for the picture, but since the girls are still a few months away from starting to lay, I removed the plastic dish bins after the photo. I think you can see how easy it will be to remove these bins for cleaning or replacement. I am using the deep litter method and currently the wood chips are 4 inches deep in this photo. I have designed the deep litter to go as deep as 12 inches. The bottom of the nest boxes are at 12 inches and the top of the bins are about 17 inches. 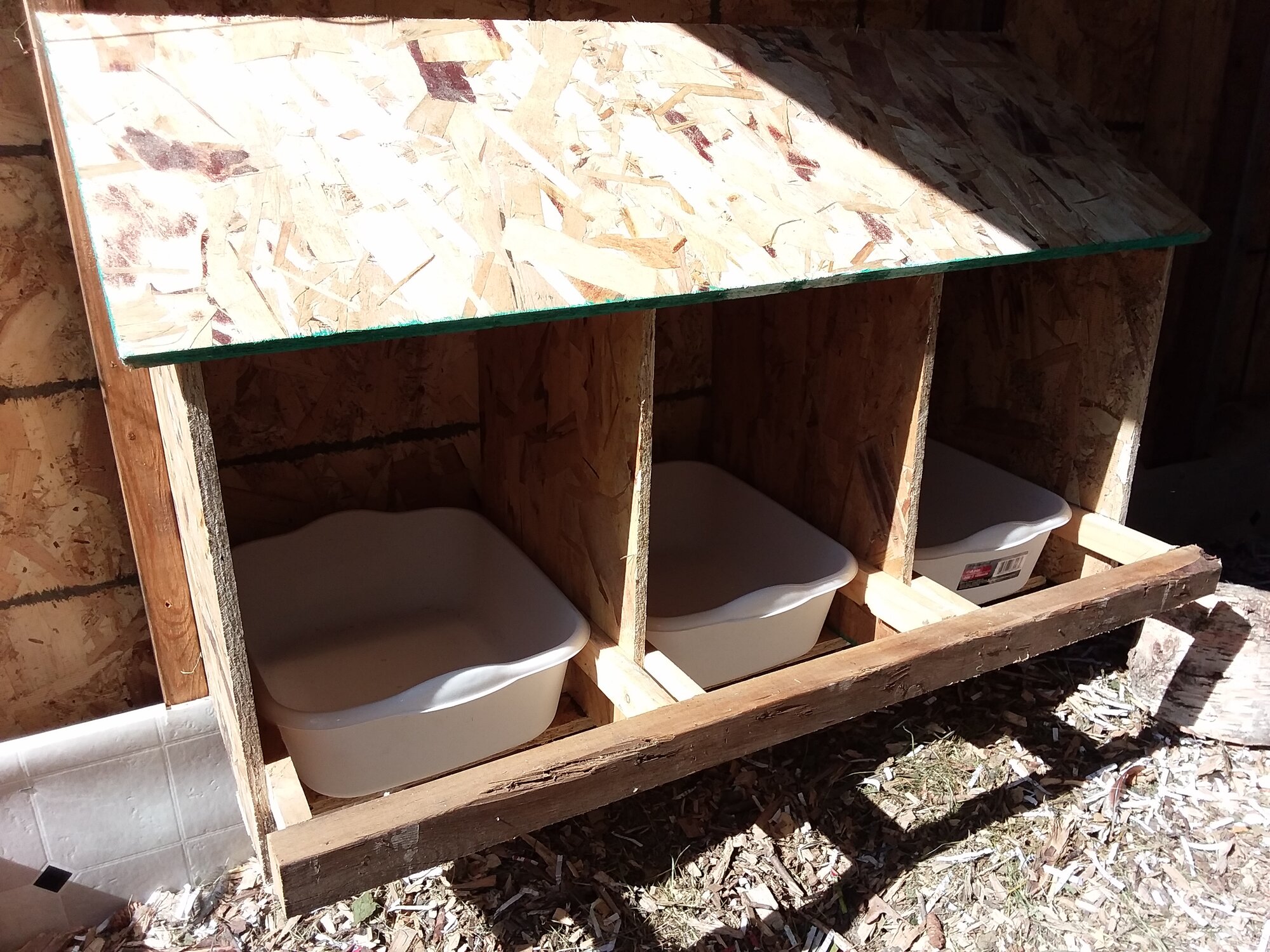 Beautiful! Now that you've had it almost a year, how do you like it? Would you make any changes?
Reactions: gtaus

gtaus
One thing I have changed is that my dollar tree dish bins for nest boxes needed to be screwed down on to the rail in the back. As my hens got heavier, they started tipping the bins despite the anti-tip bar I had installed under the bins. Since I have added the screw to the dish bins, there have been no more incidents of the bins tipping. I only needed one screw in the middle of the rim of the bin, so if I have to remove the bin for any reason, it's still really easy to remove and clean.

My original idea was to move the chicken coop to fresh grass maybe every month. In reality, the chickens scratch and dig up all the grass and I did not want to turn my backyard into a dirt parking lot. So I have basically set the coop in one place and just left it there. I turned the dirt chicken run into a deep litter chicken run filling the run with leaves, wood chips, grass clipping, and just about everything else I pull out of the garden that the chickens will eat.

Other than that, I am very happy with my coop and I think the changes I have made have been for the better.
Nice coop! It is much more pleasing to look at them mine...
Reactions: WannaBeHillBilly and gtaus

gtaus
Thank you for the review. I used a lot of old wood and shingles I had behind the garage. New paint makes everything look better. Also, I liked the red and white classic barn look for the coop.
You will need more ventilation! I didn't see any hardware cloth over your sliding windows. Without it, they are not secure from predators.
How often do you move the coop?
Reactions: LaFleche, WannaBeHillBilly and gtaus

gtaus
I was thinking I might need more ventilation up high. The sliding windows have screen over them, but not hardware cloth. Do you think a predator could climb up a 5' wall and then break through the screen? I plan on moving the coop once in the spring to the backyard, then again in the fall to bring it closer to the house for the winter. Thanks for the review.
Read more…

Good looking coop! I love that it's mobile, and I'm impressed that you built it yourself. I like your idea of putting a garden cart in the run. I'm looking for ways to add additional shade to our run--thinking about putting an old picnic table in there or something.