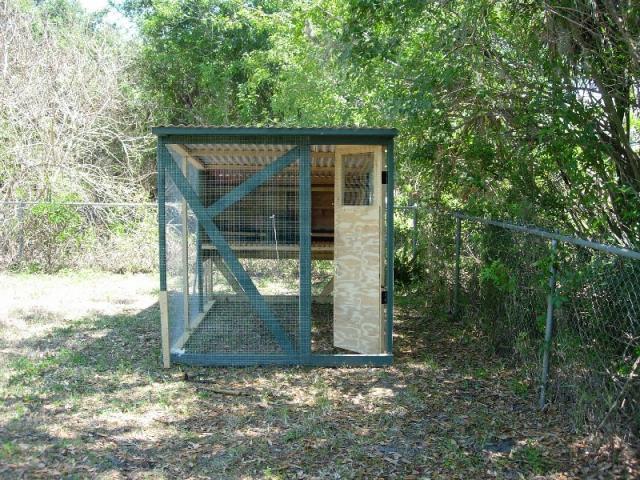 Hi I live in Port Charlotte Florida. We wanted to create a coop that was all one unit coop & run,
since we have limited space we built the unit from plywood, 2x4, 2x2 and hardware cloth.
The coop measures 6X10 is 5ft tall on the drop down door side and 6ft high on the entrance door side. After the coop was finished we found that we forgot to put in roosting perches so we added two an A-frame step ladder roost.
Both water and feeder are suspended from the roof rafters. We started with four 4 to 7 week old birds and then added three bantams to the mix.
the 2x2s in front of the nesting boxes we call the patio. On the patio I place a 30x20x20 cage with the bantams in it so everyone could get used to each other The cage was moved to ground level and I removed the water and food feeders and cut several of the wire cage bars allowing the bantams free run of the coop but also allowing them to duck and run to saftey if they were getting to pecked at..it worked out real well.
The Barred Rock in the middle was named Lola we had to change it to Larry when (she) started crowing....lol... sent him back to the local farm where he came from. I miss him!
Because of all the rain here in Florida I know that keeping the run dry is important to keeping the smell down. Even though the coop/run has a roof we added tarps to extend over the top of the coop for more shade and more rain protection. This is the coop today.. Now we have the 2 Rhode Island Reds, 2 Australorps, 1 dark Cornish bantam, 1 Silver Duckwing Bantam.
We are going to go throught the winter with these girls and then add 2 to 4 more some next spring. I have my eye on some Marans and Wyandottes.

Ventilation certainly wouldn't be a problem, very airy.
Nice coop and run. I'm wondering if there is enough space for the number of chickens you ended up with.
Read more…