Greetings,
My first post to BYC. I'm raising 3 chicks (2.5 weeks old).
Short question:
I made a nipple feeder out of a standard water bottle and hung it on the side of my brooder. Should I punch a hole in the bottom of the bottle to relieve the back pressure so they can get more water? Are they too young to use this effectively or should I switch to a horizontal cup feeder? It seems to kick out a good amount of water when I press the nipple up.

Long Question:
I'm raising 3 chicks (2.5 weeks old) in a big plastic tub brooder and switched them over to a nipple installed in the cap of an upside down water bottle. The nipple doesn't leak but my concern is that they aren't getting enough water from it. I took out the regular water feeder which gets tons of pine shavings in it every day. I used a coat hanger to make a holder for the water bottle nipple feeder and it hangs over the side of the plastic tub, just above their heads. I got them to start using it within minutes by holding their beak on it while pushing upward on the nipple to get water to come out. After I was convinced they all had it down I left them to their business with only the nipple waterer. When I returned about 3 hours later they were all constantly pecking at it. I dropped the old water feeder back in and they raced to it and started drinking big gulps. It appears that they are not getting enough water from the nipple feeder. When I press up on the nipple it appears to let plenty of water out. The chicks seem to be really pushing on it, but maybe there is too much backpressure and I need to add a hole in the bottom of the upside down water bottle? How about using the horizontal feeder? Any other types of no mess water feeders I should consider?

Thanks for reading.
-Derick

Hi Derick - yes, it's essential to make a hole in base of the bottle - otherwise they will not get water.

I usually put a conventional waterer and a vertical nipple waterer (same as you - plastic soda bottle) in the brooder. After I see a couple of chicks drinking from the nipple, I remove the conventional waterer. Not only is this cleaner, but I find that its good for chicks to become accustomed to using them as they are ideal for medication / broody busting etc throughout their lives
D

Thanks for the confirmation. I drilled a small hole in the bottom and noticed that a lot more water was being dispensed as the level had dropped a lot. Common sense I guess. I'm still concerned that they aren't getting as much water as with a standing water feeder so I'm going to be monitoring them closely for the next couple of days. I put an IP cam on their brooder bin so I can watch them 24/7 lol

Common sense I guess. I'm still concerned that they aren't getting as much water as with a standing water feeder so I'm going to be monitoring them closely for the next couple of days. I put an IP cam on their brooder bin so I can watch them 24/7 lol

Well, the camera sounds like fun but I'm not sure why you think the chickens would sit around being thirsty rather than drinking available water just because they have to touch a shiny thing to get that water? You do understand that it isn't a drop per peck, don't you? They can stand there touching the shiny bit and the water runs out. That's what they do when they're really thirsty rather than just grabbing a drip because it's appealing.

We built a nipple waterer for the run, but still use the inverted-bucket station inside the coop - less water ends up on the floor. Took a day or two for all the birds to figure out how to use the nipples. We added a 8" cinder block as a step for the smaller birds. 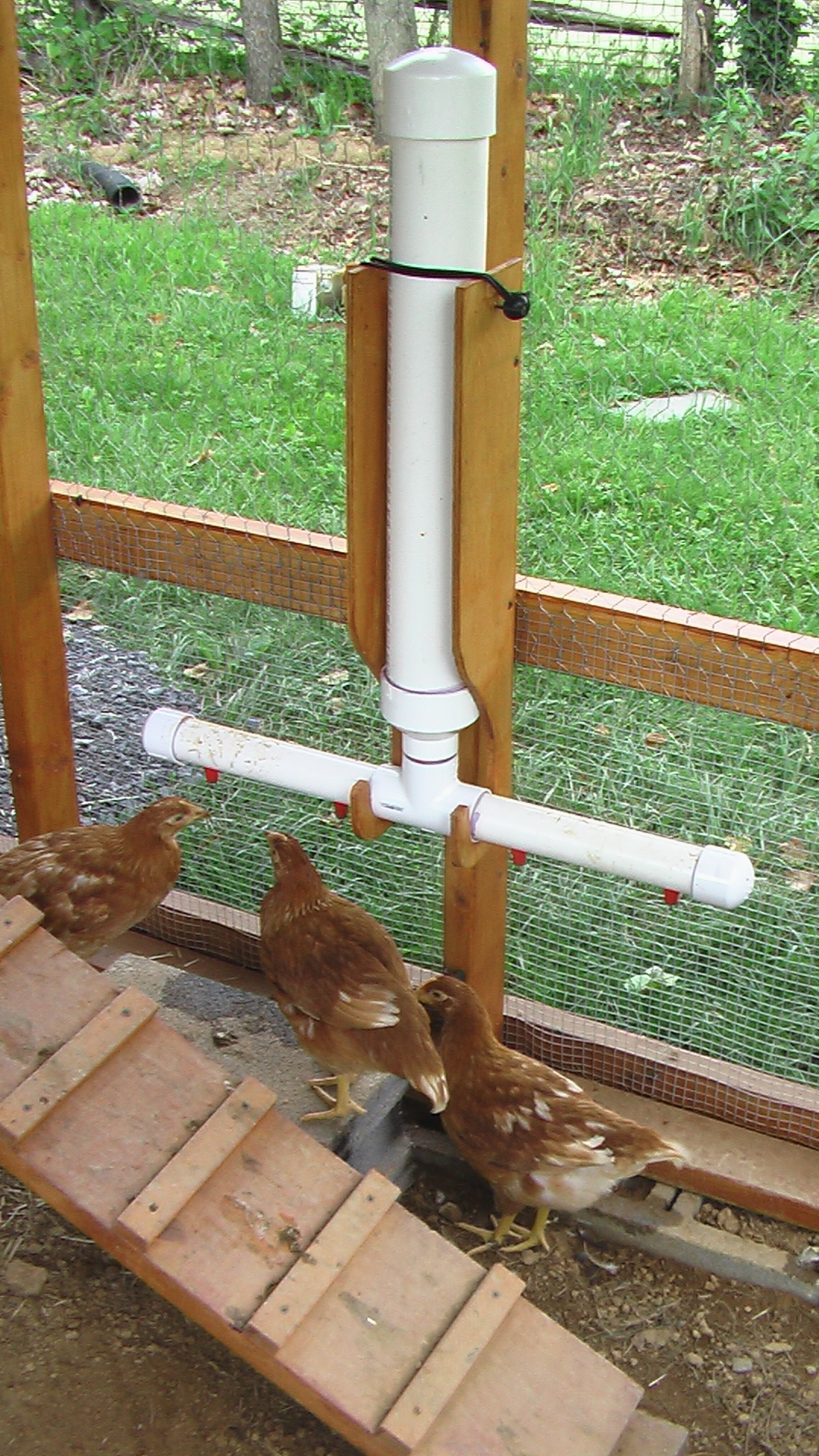 I started my chicks on nipple upside down juice bottle at 4 days, they caught on in about 1 min. I have a larger hole in botton, to hang upside down, and I think easier to fill or add ice (108 yesterday) with the cap (with nipple) still attached.

Keeping bedding and poop out of the food and water

Training silkies for a nipple feeder