Who would have thought a Home Depot bucket would work for a nest! She hatched 4 ducklings this year. I had another mother who hatched three, but them kicked them out of the nest and wouldn't let them back under her to keep warm, so I moved those three into the house for a week waiting for this bucket-nester to hatch hers, then hoped I could introduce the orphans. Well, she took them!! How there are four little ones and three slightly bigger little ones all happy together!

FYI they are all mixed breed, pet-quality call ducks.

Still have another two nesters to hatch in the next couple of weeks! 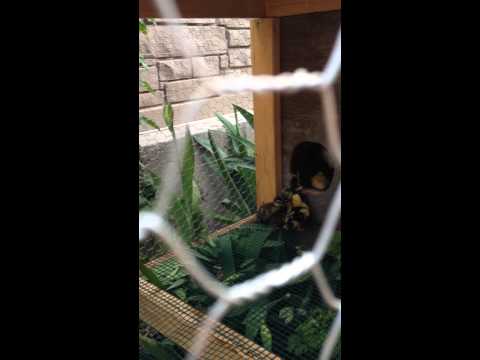 They are absolutely adorable, great idea!!! I have my own ducks, couple a pekins and I have a quick question bout raising ducklings. My female is on a clutch, will she raise and take care of them for me when they hatch or is there anything I should give them?

I have only had ducks for about 5 years, and the first year I had a hatch I didn't do anything and the mother took care of it all.The only thing I had to do was rig a chickenwire "ladder" into their swimming pool so they could climb out since they were too little to use their wings to push themselves up and over the edge. The next year the same mother would hatch the ducklings and then kick them out of the nest for some reason--found two perfectly hatched ducklings dead in a corner of the pen that way. Don't know if she killed them or if they died and she was just "cleaning house". One of those my son actually revived and it grew to adulthood (I still have him) but he has an oil glad issue where he can't clean his feathers--maybe that's why she kicked him out, because she could tell something was wrong.

So for the most part, their instincts should kick in and they can do it all themselves, just need a little help with swimming water (had a couple die that couldn't get out of the water, even when it was a shallow pool--placing a brick on the inside edge seemed to help with this) and having "chick feed" that is smaller and easier for them to eat than normal pellet food

This definitely helps a lot thank you! Will they be alright if they go into the huge pond we have for them or should we just start out with a kiddy pool?

One duckling hatched, other eggs abandoned