45 Babies and Counting! A Few Questions!

About 19 days ago, I set 99 Coturnix eggs (a mixture of Jumbo Browns, Texas A & M's, and Tibetans) that were shipped from an ebay seller. They started hatching Friday night. I just pulled another 10 from the 'bator a few minutes ago, and it looks like we have 3 or 4 more late hatchers working their way out, and we'll be done - which should put us at about 50 babies. We did have one little "failure to thrive" weakling that we culled - he hatched on Saturday, and by last night it was obvious that he wasn't going to make it...but ALL the rest of the babies are doing great, running around and eating and drinking like MAD! The vast majority of them are Browns (some of them have sort of a cinnamony-red tinge to them - are those a different color?), I think we're up to 7 or 8 Texas A & M's, and just 2 Tibetans. I have all the empty eggshells in a box to count when we're done to see exactly how many ended up hatching - it's easier than counting those fast little buggers in the brooder! 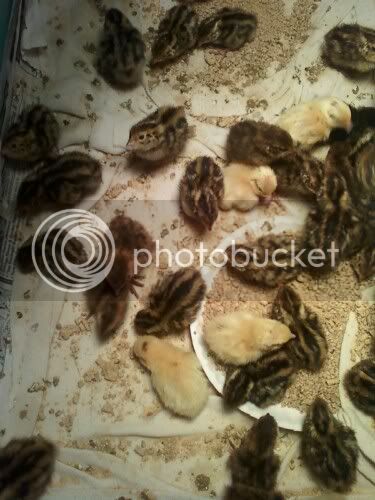 I have them on Home Grown brand Game Bird Starter (30%), I'm using a chick waterer with rocks in the bottom (no one's drowned yet!), and I do have the younger hatchlings separated from the older ones, since the hatch has dragged on for 4 days now. They are in a brand new brooder that hasn't been used for chicks, and will ONLY be used for quail - I DO have ducks and chickens as well, and I know that you shouldn't mix quail and chickens!

I'm a first time quail owner, and I just want to make sure I'm doing everything right! So, I do have a couple questions:

- About how many degrees per week can I lower the brooder temperature?
- How many weeks before they're weaned off the heat and able to live outside in the early spring in Wisconsin? The ones we keep will be going into this pen (with a roof on it, of course!). It's 4' x 8' split into 4 different sections - I figure we'll be able to fit a quad (1 male and 3 females) per section - is that reasonable?

- When should I switch them from the Game Bird Starter to the 22% protein Game Bird Developer?

And I think that's it for the moment! Thanks!

my house in maryland

i don't switch my coturnix off of starter, that's all i feed but that's just me right now....
as far as the brooder temps go , generally you decrease by 5 * a week until they're at the temp of the surrounding area .

They are so cute. My button Quail should hatch any day now.

I drop temp a little faster than some 2nd week high 80s 4th week there feathering out in room temp. I have heard it said, by folks who's opinion I value, they feather out faster when a bit on the cool side. It seems to work... check under the wings for bare skin \\ thin feathers. If you condition them slow, once there feathered out, throw there butts out in the pen

Quote:
wow, never thought or heard that!! This is why I like to read ALL the topics - learn something new every time!! **moves brooder a foot farther from heat lamp**

Quote:
the pen looks fine,however to insure better fertility I would suggest putting 2 roos in each unit.

I Have had 9(6 hens and 3 roos)in a 2 x 2 pen and all got along just fine,those were raised together from day 1

I do the temps based on the birds but I tell people the 5 degrees a week thing just cuz a lot of poeple don't watch the babies enough to know when they are cold/hot.

to start I have 1 end of brooder with correct 95F temp... this is just a area under the light NOT the whole brooder!
Make sure they have a cool side of the brooder....

The chicks should be just snuggling cozy to each other inside the circle of heat.
You will see them move away from the light as they grow and get to warm...
That is when you lower the temp/light bulb wattage.
The feed/water should be on the cool side of the brooder so they have to come out of the "heat"
This will help them adjust temps faster

I brood inside for 2 weeks then brood outside in a enclosed box for 2 weeks (box has corrugated lid so air flow across the top of the brooder is outside temps but they do not get any wind direct or any weather and still have heat lamp.)
Then they move to a wire bottom cage with 1/2 front of wire in the enclosed half I have again a light to provide heat...
at 6 weeks maybe 7 if they are small.. they get tossed into the adult group pens.. 1 pen for the boys and 1 for the girls.

at 10 weeks if I like the size and color I keep them for breeding, if they are still small or the color is not what I want I either sell or have dinner. I also collect eggs from the hen pen for eating.

*Pile = chicks create a dog pile in the warmest part of the brooder and either climb on top each other or burrow under everyone to get warm. This means they are to COLD

Rainwolf - I have plenty of experience brooding ducklings and chicks, so I'm pretty confident about getting the brooder temperature right and placing the heat lamps correctly - just wasn't sure how quickly I could drop the temps, since they grow SO FAST! My boyfriend built a long, narrow brooder, and they have a light on either end, feed and water in the middle. They're hanging out all over the place right now, so they must be comfy!

The last 2 babies hatched this morning - I just finished cleaning the 'bators and tossing the rest of the eggs. Most of them had developed, but never pipped OR died mid-zip.

A grand total of 58 babies hatched. That's a 58% hatch rate from the original 100 shipped eggs - not too shabby! However, we culled one weakling, 2 of the late-hatched babies died shortly after hatching, and my DUMB boyfriend decided to clean the brooder while I was at work today and gave them back their waterer with NO rocks in the bottom, so when I got home from work 3 had drowned!!!

That's all taken care of now, the rocks are piled back in there, and the remaining 52 babies look as active and healthy as can be!

Annarie, you need to grind your crumble little bit for quail for first 7-10 days or so, they are too small to bite larger chunks.

As for the temp I never use thermometer in my brooder, I go by chicks behavior (whatever species I brood).

Overheating is very bad for birds.

Color question -- do you think this one has some silver (grey)?

B
Urgent! Quails pecking each other
2

What to Feed Coturnix Quail