A couple pics of the babies

Our Muscovy hen sat patiently on 18 eggs, but finally hatched them out on Tuesday. About 3 eggs didn't make it prior to then, and another lil' guy didn't completely make it out of his shell before dying. Two more eggs were left unhatched, but we were blessed with 12 beautiful lil' guys and girls (Cheaper by the Dozen?).

The first pic is a cameraphone shot of a one day old being held by yours truly. Too cute! 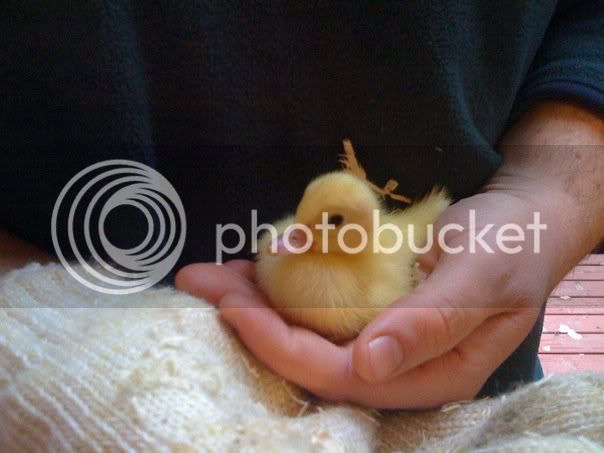 The second pic is of mama and her kids wandering about the run, feeding and drinking. Trust me, she wasn't happy to even see me in the backyard. We aren't what you would call "friends"as she was adopted at an older age from a farm, so me being in "the zone" so to speak is not very fun. 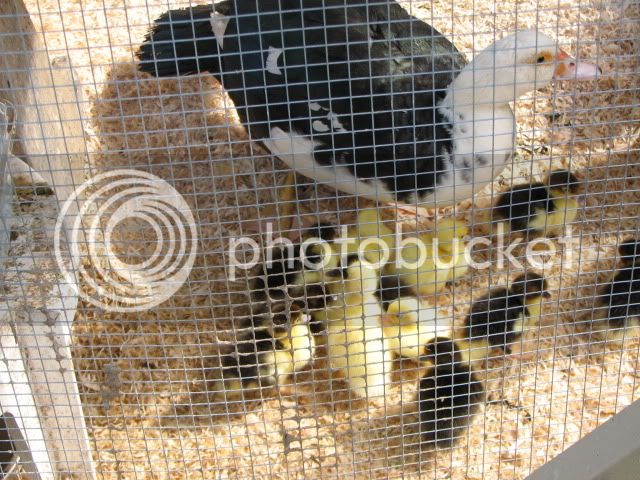 The final pic is of dad, hanging out on the back porch. Apparently, since he isn't "getting any", he has decided to be our new best friend. That's great - except for the poop all over the deck. But he's lonely, so what can you do? 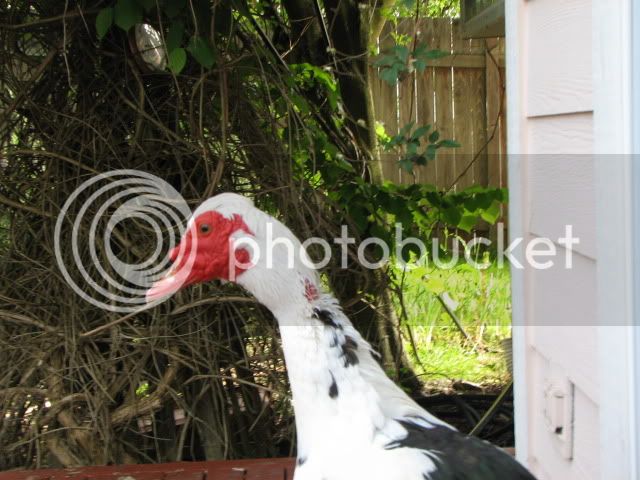 Anyhow, so far so good. The lil' ones are drinking their water and eating their food, and basically being remarkable little creatures. I'm really looking forward to being able to spend some time with them as they get older before they head off to new homes.

Thank you so much for sharing these fantastic pics!

Oh these ducklings, I wanna just squeeze them!

The first time I ever saw a muscovy duck, I was driving on some back roads in
southeastern Michigan.

I stopped the car and the duck looked at me placidly,
like he (i know it was a he now by the carnunckling? sp?) was expecting me!

All I knew it was some kinda duck, and I have had a soft spot for them since.

Too bad the mom doesn't take to you.
Could be dangerous.

Thanks! I enjoy sharing, as usually I'm the only one that sees them other than if my son is interested.

My wife has only a passing interest and my daughter is traumatized (she's 14 and doesn't think I'm "cool").

Here's a quick pic today of mom and kids out of the run and in the backyard. 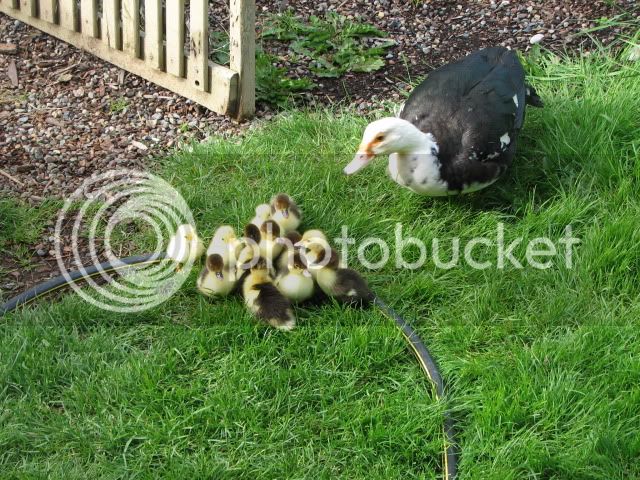 This mom came from a farm, and has never been out of the smallish run that they have. I feel bad, but her wings aren't clipped and she has never let me approach her without panicking. Today, though, I figured with the little ones that she might just wander around with them, and so for about 1/2 an hour I left the run door open and let them mill about. It worked great until daddy caught a glimpse from the deck. 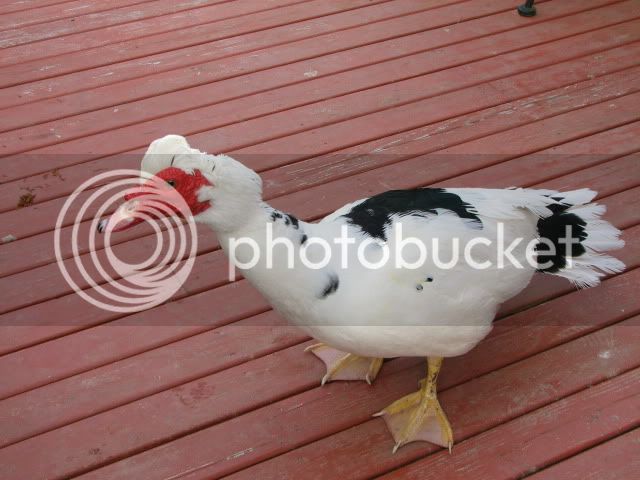 To him, it was mating season part 2. That lasted about 5 seconds, which is what it took for me to kill the chase and put him back away from her. She was obviously not interested in being with or around him, and his incessant panting (and cool hair style) obviously told me he had only one thing in mind.

We'll just have to see how it goes re-introducing him to the new family I guess.

Oh they are just adorable! I just love seeing them run around with momma, I haven't gotten to let my girls do that this year though, too many problems in the coop. When my mommas raised babies last year they took them swimming right away. i had 1 suprise clutch this year that was really having some fun swimming when i found them too, lol. They have more of a protective coating of oil on them when momma hatches them.

That would be a surprise! But a nice surprise.

So adorable! Careful bringing dad into the picture. I've heard male muscovies will kill their babies.

Well, he's been banished for a week now, and he has only had two supervised visits, both lasting under a minute. He hasn't seemed too interested in the babies (yet), but rather just seems really, really h***y.

For now, he's just going to have to stay out of the run, and when I let them out he'll have to be put somewhere else.

babies are sooooooooooo cute! I have one that looks like yours. I named it Penguin!!!

Thank you! My daughter actually named one (Evangeline) and my son named another (Speedo). Boys and girls sure think differently. LOL

Joining the Duck Side
2 3

Is there something wrong with him?
3 4 5