I have 8 five week old white silkies that i bought from ideal as day old chicks. They've gotten out of there awkward phase. There even starting to get out of that ugly phase. Everything was nice and happy til one of my chicks started pecking abusively at the rest. In the past week they have been establishing the pecking order. The have been jumping at one another and maybe a peck or two. But this guy has crossed the line. He grabs the by the neck and holds even after the other chicks starts to run and cry. So i took immediate action. i set up a make shift brooder so he can have alone time. I read that this is a good technique on abusive older birds. Hes right next to the other guys brooder. Should i move it further so that they can't see each other at all? Should I rehome or cull or keep trying to work on his behavior? I've never culled a chicken before but this guy wouldn't make it too hard. So please give me advice. What should I do?

I like that you separated him. I would keep him separated until maybe tomorrow morning, and then tomorrow morning, i would get him out and walk around with him under your arm around all the other birds. If he pecks at you, hold his beak to tell him that's not allowed. Keep holding him until he has submitted to you for a few minutes and then let him back with the other birds. And watch him. The second you see him pecking inappropriately, pick him back up and hold his beak again. Let him know that you're the boss and that you don't like him being mean. If doing that for about a week doesn't work, i would find a way to get rid of him, rehoming or otherwise.

Are you planning on using any of these for breeding? If so, keep in mind that a good temperament can be bred into, or out of your bloodlines.

Brood with an Attitude

Geez .. it must the be age .. or the season .. This pic I took yesterday .. right before one little turd grabbed the other and did EXACTLY what you are describing.. He got carried around for a few minutes (they are NOT friendly) .. he was mortified .. and seemed to quit. I hope he acts better today or I might sacrifice him to the Hawk God (kidding) 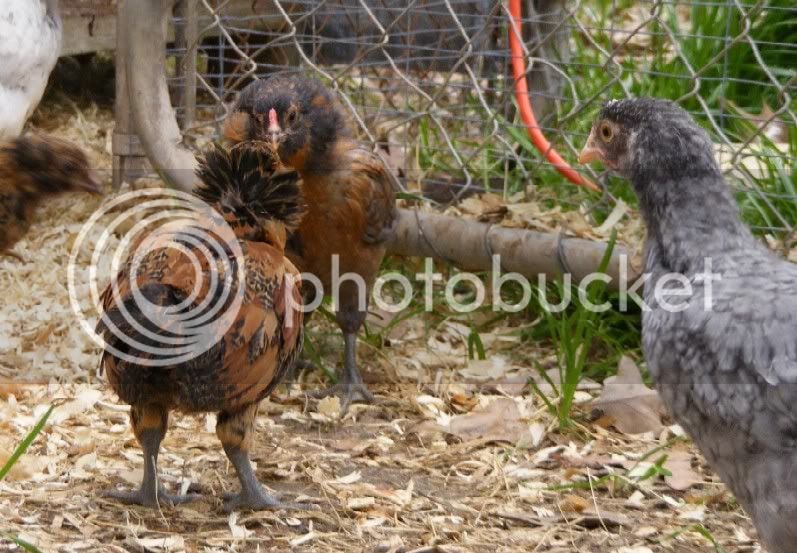 Cull the mean ones.

Quote:
Thats what stinks too. For a hatchery chick, hes not that bad looking. Plenty of fluff, 5 toes, decent spacing, correct comb. But I'm not going to keep him much less breed him if he continues to act this way. I'd rather have a good temperance than be handsome. I don't have a whole lot of room so i'm not going to waste it on rooster thats ornrey.

There are some high powered air guns (just air) out there if you can get one plop a chair in the front row take a seat and take aim!!m He will think it is the other

superbird, may take more than once but some of these guns will knock him off his nasty little toes and do no harm!

I would but hes still pretty small. Their not even in the coop yet, their still in the brooder. I will use that advice if I have a mean rooster in the future though.

I have one about that age acting the same way. He's in permanent time out!

He's only allowed 1 friend, a pullet he gets along with. If she wasn't so scared of the big birds I'd take her out too. He grabbed my hand today the little butthead! I knocked him on his butt, but I know he'll do it again.
Last edited: Mar 12, 2010

A
Help! Agressive chicken beating up on chicks

HELP! One week old chick is pecking and drawing blood on 2 other chicks