someone is not camera shy

Have an issue something is killing off the odd chicken, now the odd unwary youngster i can understand, i do let mine freedom over a couple of acres within a fenced area, but something determined came right up to the house where a chicken that had been injured and had recovered but while being nursed decided she liked living near the conservatory, she was set well back between our home and an IBC to the back of her was a 8x4 wire sheet used as fencing for baby muscovy ducklings in two sizes, 12 about the full grown but small chicken and 26 much smaller in a second small compound behind them. This creature bit the head off poor Grace - I really should stop naming lame ducks as lame ducks inevitably are more likely to die and then its personal as you feel you know them, but poor little Gracie got cornered, she clearly put up a fight or tried climbing the wire fence to escape her feet were battered, her head was gone, one whole leg scoffed, the innards all neatly removed, and strangely the other thigh was a neater job than if i had de feathered her myself, a good size covering at least the back of my hand. Now the night before she had popped into the larger ducklings at feeding time, they were used to her and would tolerate her scoffing down net to them, and I had given her an airlift out as she is not the most nimble bird.
So the predator came right up to the house, it killed her in a tight spot as her eggs were set back and several crushed( I knew they were there but they are awkward to get to so I only collect say once a week) there was poop over them when they had been kill, well clearly she had been scared whilst still struggling to save herself.I am assuming a missing head is tell tale for a cat, but do other uk critters remover heads. My own two cats are very unlikely to be the culprit - they take a wide birth near chickens and if Grace wanted there dinner they would step back and let her have it, so not brave enough I think, they are not big cats, and circle most chickens and ducks. A neighbour has half fed barn cats and I know they come to the other end of the house because often when i am cooking in he dark the security lights go on as those cats wander past. A broody hen this week has lost chicks going from 13 to 8 to 7 to 1, she was outside the compound too often and a cat might have had them then got bolder coming round he house looking for more and found poor Grace. Although we had thought the local owl was getting the chicks because they disappeared at night and we have noted its flight path up and down our field. Owls do not I think take heads, and usually take food away I think. So cat is the most likely, which is a big concern as if we have one now comfortable enough to come right up to the house the baby reeding area is at risk, our own cats can go in and out and do (not eating the more vulnerable babies) The predator stayed right next to the patio under the night lights to scoff its prey, and did not carry it away. I put what remained of poor Grace last night in a cage trap, but it is untouched. I put our cats in the barn so they did not end up in the cage (i cannot rule them out) but at tea time when they were hungry I offered them Gracies poor remains still with a nice breast and and nice juicy leg, and they looked gave it a look and ate a biscuit hoping for a nice tin of cat food to appear.
So the killer appears to have got off scot free and is still roaming.

My hen house with a good 100 plus birds chickens and ducks will need beefing up it is large and I have the kit, and will need to let out the baby ducklings in due course. So far, cross fingers, the local fox population has not come into the main fenced area and is unlikely to scale any areas, but a cat would be a total pain. Would a fox be so brave as to come where lights go on at night?
Any thoughts on this would be appreciated.I accept there will be losses, we have have foxes, owls, buzzards for a couple of years now, they come in breed, then the parents train the young by flushing pigeons from the leyland and teaching the young to catch them, they do fly over the chickens but the chickens stay in the orchard under the trees mostly, and occasionally if there is a fuss young can see they are warning others the buzzards are near, we usually race over and flap stuff around to ward them off, so far Buzzards have not been a n isle. My husband says he saw a hawk in the last few days. The buzzards may or may not have moved onto one of their other seasonal spots. We also have a load of crows from the nearby church much to the surrounding farmers disgust.
So after this long rambling (hopefully informative) I could add picture but felt you could do without it, my own cats are unlikelybut cannot be rules out, neighbours cat, a fox, birds? well not likely they will gobble the head off, surely even an owl would find that difficult. Oh the chicken between the house wall and the IBC with the fence behind her had a set of shelves so a bird could not swoop in. Cats ours or neighbours is looking likely. My cats I can barn at night, but the neighbours cats? They are not domesticated in law, and complaining to a neighbour won't help.But if right next to the breeding babies area and the IBC providing a launch pad for a cat am i yet at the point i need to roof the breeding area?
Any thoughts or comments would be gratefully received.
L

Been busy, so apologies for lack of updates. I have had a chicken killed, and 3 ducks killedincluding a large muscovy male. We believe it is a fox, and have been taking steps to improve their area.

I was advised to feed earlier, so the birds ate the food, and less rats once dark
I have not found this has a noticeable improvement,
so now feed late, as this encourages more birds to come back into the fenced/caged area where they are protected rather than roosting outside in the orchard and a round the property. The die hards who roost on top of the cage are safe from any fox. (morning feed is outside to help move them towards the best grass. As we have different areas.

I bought a number of black plastic buckets at the beginning of this year, black should be better than coloured plastic reference the uV light, but still several have failed, prices go up, quality goes down. I have just bought some rubber (car tyre) shallow tubs, meant for horses, this will withstand even the toughest knocks, plus won't split if the water ices over.

) But Mike Pence his son is happily taken over his spot, and is keeping the others in line. I may have only had Donald a couple of years, but I have no idea how old he was. He had looked a little sad this late Summer, and despite cider vinegar pick ups, I found him sat down with his head tucked in a corner. Poor baby. I add a photo of the good times.

Your pen looks fairly secure, except from owls and hawks, or predators that can climb. Do you have raccoons or weasels in your area? They can climb, and raccoons will also reach through the fence to grab the nearest body part and bite off whatever it can grab. Weasels do tend to bite off the head first, eat their fill, then leave the gory remains. Have you considered putting a roof of netting over your pen?
L

I am UK based, we have owls and buzzards, The buzzards have bred here for several years, the owl I have pictures of, the main pen has wired roofing the same as on the sides, we had considered netting the extension we are building but thanks to squirrels I think wire is likely safer,weasels are possible, so too is the odd escaped ferret, Luckily no raccoons, but I know we get badgers I see their foot marks when it snows, we have foxes in a spinney (clump of trees) we own, they too have bred here for years, as they kept the rabbits down, and rabbits attack our trees they got a free ride, but now if I become certain foxes are the issue, and we have fox droppings, I will need to take action - a shame as I like foxes. Also rats go after young birds, and occasional catch a chicken head.We have rat cages, and an air rifle for them,poison is not an option.
\i think your right, beefing up the netting is a must, we do lay it on the ground and add some stones but I notice rat holes go past the netting either side.
We plan more perches as Muscovy ducks will perch, hey they go on the roof of the caravan, the chicken run, the packing shed, thebungalow roof so far only the barn roof has not been used. The chickens will roost in trees and also the Muscovy, the white Aylesbury and pekin ducks may waddle fast but are clearly the easy kill.
We have a high seat, but having the time to man it is our biggest problem.
We, I say we but I mean the other half shot a rat yesterday.
We also used some old tiles on part of the floor near the fence line then added wood hips, covered a rat hole we know was in use, and so far they have not managed to open that up, we have a lot of these tiles and can extend it, we do 3 layers overlapped.
L 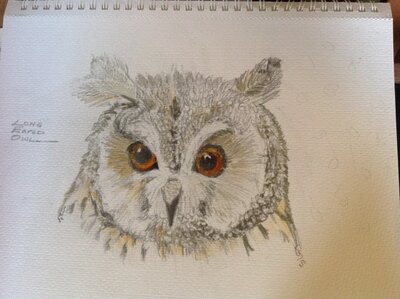 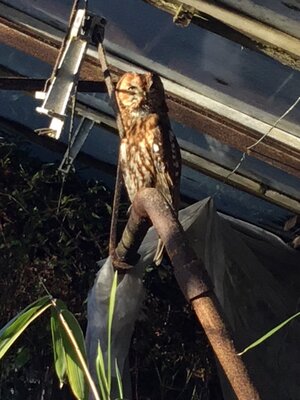 This is the ow that hangs around, although it is not usual for this area we think it might be a long eared owl rather than the more common ones.
You must log in or register to reply here.
Share:
Reddit Pinterest Tumblr WhatsApp Email Link