I am new to raising chickens, but I absolutely love the ones I have! Unfortunately, I have ended up with 3 roosters to my 5 hens. I have been trying to find the roosters homes that will not kill them. I'm finding out no one wants roosters. This breaks my heart. Any suggestions? These are my boys.. 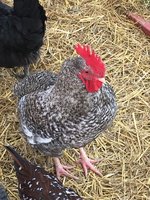 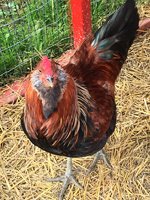 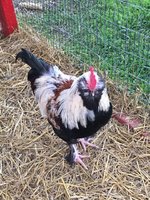 You will learn very quickly that killing roosters is part of the job..

I manage to give mine away, but they all make soup with them.

The facts of life suck sometimes

I had to rehome one roo over the summer, and had good success with advertising him through farmers groups on Facebook. He ended up going to a 4H girl who showed her flock. She took him to the county fair and he won!

But I was super selective because most of the people who were interested in him wanted him for meat or cock fighting (they didn't say that, per se, but it's a thing). So, yeah, there's not a big market for extra roosters, but I'd try FB. :/

1. Rehome/sell - difficult at best. Once they go anything can happen to them.
2. Process and eat.
3. Make a bachelor pad separate from the hens for them to live in.
Pretty much those are the options.

right now I've got 5 roo's to 5 laying hens with a couple younger ones and all i do is zip tie their legs but so they can still walk just enough so they cant fight ( a friend of mine with chickens gave me the idea) roosters are very hard to rehome but i managed to give away 2 of mine, its just better to not think about what might happen once you give them away

Those are sure some pretty boys. Are you able to keep any roos? If so, consider a bachelor pad for them. Also, try posting them in your state thread and/or the rehoming thread. You can also try your local animal shelter, although the ones that take roos are usually over run with them, and have to limit or cull the ones they take. It may be hard, but sometimes culling is kinder than putting them in the hands of a stranger, who may not take the kind of care that they tell you they will. Good luck.

Honestly, your best bet is to find them homes and don't ask questions. Once that bird leaves your premesis, it is no longer your business. It is hard to rehome a rooster because most experienced chicken keepers know that it's not practical to keep too many of them. It's expensive to feed a nonproductive animal, and too many of them in the flock are hard on the hens, causing stress that could reduce laying.
L

Tip of the mitt MI

She only survived because the weasel was beaten off her and then pop goes the weasel. I like the food thoughts. Thank you for that. So, any successful rehab info?

I usually have sucess selling cockerels, people usually just like to have them for breeding or just to keep in their flock. One person said they wanted beautiful chickens like ornaments walking around her yard when she bought a few of my cockerels. Is it harder selling chickens in your area? I don't know why people would buy roosters just to cull for meat. I hear easter eggers and leghorns have a poor amount of meat on them.
L

Tip of the mitt MI

I am so sorry! I’m a newbie with forums. I haven’t figured the posting thing out yet. It was meant for info from a question I posted earlier in Injuries.

Will Rooster Be Ok With Newborn Chicks?

P
Will my roosters be ok if added to a flock of hens?
2

Rooster, Bare-Backs and Scratches, Should I Be Worried?