Good morning all,
This morning I examined one of my doves (2 months old) and this is on the beak.....
1) what is it?
2) what should I do about it?
3) Is it contagious to other doves in the aviary?
any advice would be helpful
Bruce 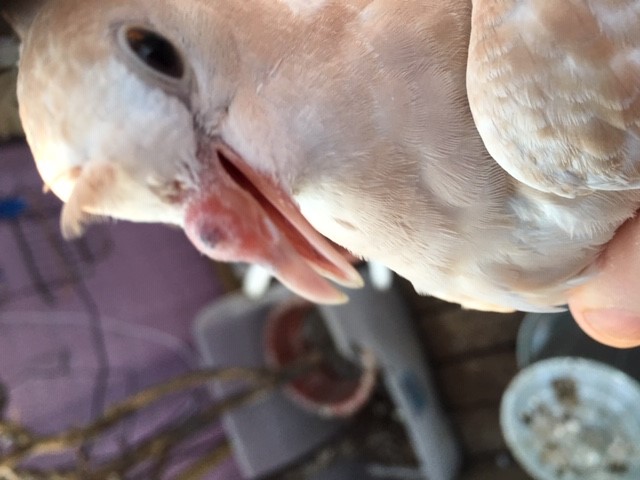 drmolarmagic said:
Good morning all,
This morning I examined one of my doves (2 months old) and this is on the beak.....
1) what is it?
2) what should I do about it?
3) Is it contagious to other doves in the aviary?
any advice would be helpful
Bruce
View attachment 1878471
Click to expand...

You probably should isolate the bird until the lesions disappear. Mosquitos are one vector for pox but it can also be transmitted bird to bird from virus shredding from the lesions.

As long as your bird keeps eating and drinking it should recover on its own although young birds may have a harder time.

Look inside the mouth to see if you have any yellowish growths(wet pox and or canker) that may impede eating.
Last edited: Aug 15, 2019

Thank you!! I will isolate and check the mouth

Not to scare you, but if it's pox not only do you need to isolate the bird but you need to practice safe handling methods. Wear disposable gloves when handling the bird, dispose of bedding and waste in a plastic bag, don't wear shoes from one pen to the next so that you don't cross contaminate.

I had a young turkey with pox last year who did not survive it, though most birds do if they are otherwise healthy. There is external and internal pox and they can have one or both forms of it. Internal pox (lesions inside the mouth and airway) is almost always fatal. If the lesions get into it's eyes, your local feed store can provide you with an opthalmic ointment. Your vet can provide you with an antibiotic to add to it's water to prevent secondary infections. Don't do anything with the lesions and they will dry up and fall off. Best of luck to you. (picture of peep peep below)

It may not be pox, but an infected injury. Male ringnecks are absolutely vicious and will attack young. They target the face. This could be an abscess resulting from such a wound and if so it would best be lanced by an avian veterinarian.

I strongly recommend you not house ringneck doves in a flock, it's stressful and unnatural for these birds which live in pairs and maintain strict territories in nature. The more crowded they get the more injuries you will see and ultimately they will start killing the younger ones and brutalizing the hens. Doves, despite their connotation, are not peaceful birds.

Years ago some diamond doves I brought in from a seller who raised them outside developed pox shortly after they arrived. All got lesions but they did not look like that. Our ringneck dove, incidentally, never developed any. They *seem* somewhat resistant versus other species and if it's only this bird, I'd lean toward infected bite wound.

after appropriate treatment and post operative care is has healed.....thx everyone!