(Short story, then my issue) I wouldn't consider myself experienced or new at keeping chickens. I adopted four about 2-3 year old girls with a coop (got them about 3 years ago). Last spring I was offered more hens and said I would take six. When I went to take delivery, only 1 was a hen so I took her. We watched TV and cuddled for months, she was so sweet. I know not to introduce a chick a couple months old to what I had so she stayed inside with me until ready. I then sectioned off part of the run so they were separate but could see and talk and get used to each other. I then let them get together and all was great for a few months. It got hot in South Central Alabama and all the girls quit laying except one of the older ones (the youngest hadn't started yet). I went to tuck them into bed and only Ginger (Welsummer) the one layer was in the coop. After days of searching, I couldn't find the other girls, no blood, feathers, nothing. More research showed it must be human intervention. I went a month or two with the one girl that was saved because she was in a nesting box knowing it was going to get cold in a few months and she needed a flock to keep each other warm. The timing happened and I got 6 ISA Brown, 6 Leghorn. Again, I knew not to introduce them to early because of sizes and numbers. Tip, don't raise 12 chicks in your house for a few months to get their size right to go outside. They can fly in DAYS! Anyway, I put those twelve 4 month olds in with the 5-6ish year old and they were great together until the young ones started laying! Now the pecking order is being changed and the elder is losing! There is a fair amount of feather pecking going on and I have applied Tractor Supply Company purple stuff on the victims which is reducing the pecking. But today something new has come up. Yesterday I spent hours in the yard petting them and didn't notice anything wrong. A friend came over and said something like 'you know you have a growth on one of your chickens?'. I said no because I was with them a long time yesterday. I admit, could have missed her having that many chickens but I received my ankle tags to identify them so they will be easily identified now. So, to my point.

My friend said it looked like 'Strangles' like in horses. I looked that up and don't agree. The only picture I have found that looks like my girl has a picture online that looks like Bird Flu. I contacted a local vet and he said no, its not it. She isn't showing any symptoms but was wondering if I post a few pictures if anyone has had similar experience.

Thank you for your input. After looking at anatomy charts its around her Larynx area which agrees with you input. She isn't showing other symptoms. Pollen is coming out like crazy right now. Thank you!
C

I am also a honey bee keeper (yes, starting second year). I've heard of many humans having allergy issues reduced while eating honeybee honey. Know of any studies with laying chickens providing similar help with allergies?

I have heard a few people use honey water to aid as an antibiotic for minor issues. I would guess that it could help with allergies as well.

Is the swelling on both sides?
Have you looked inside the ear for any ear mites or infection?
How does the swelling feel - soft, hard, fluid filled?

I could be from an insect bite or a tick - the red circle in the photo below - is that a small scab?

Any swelling or lesions inside the beak? 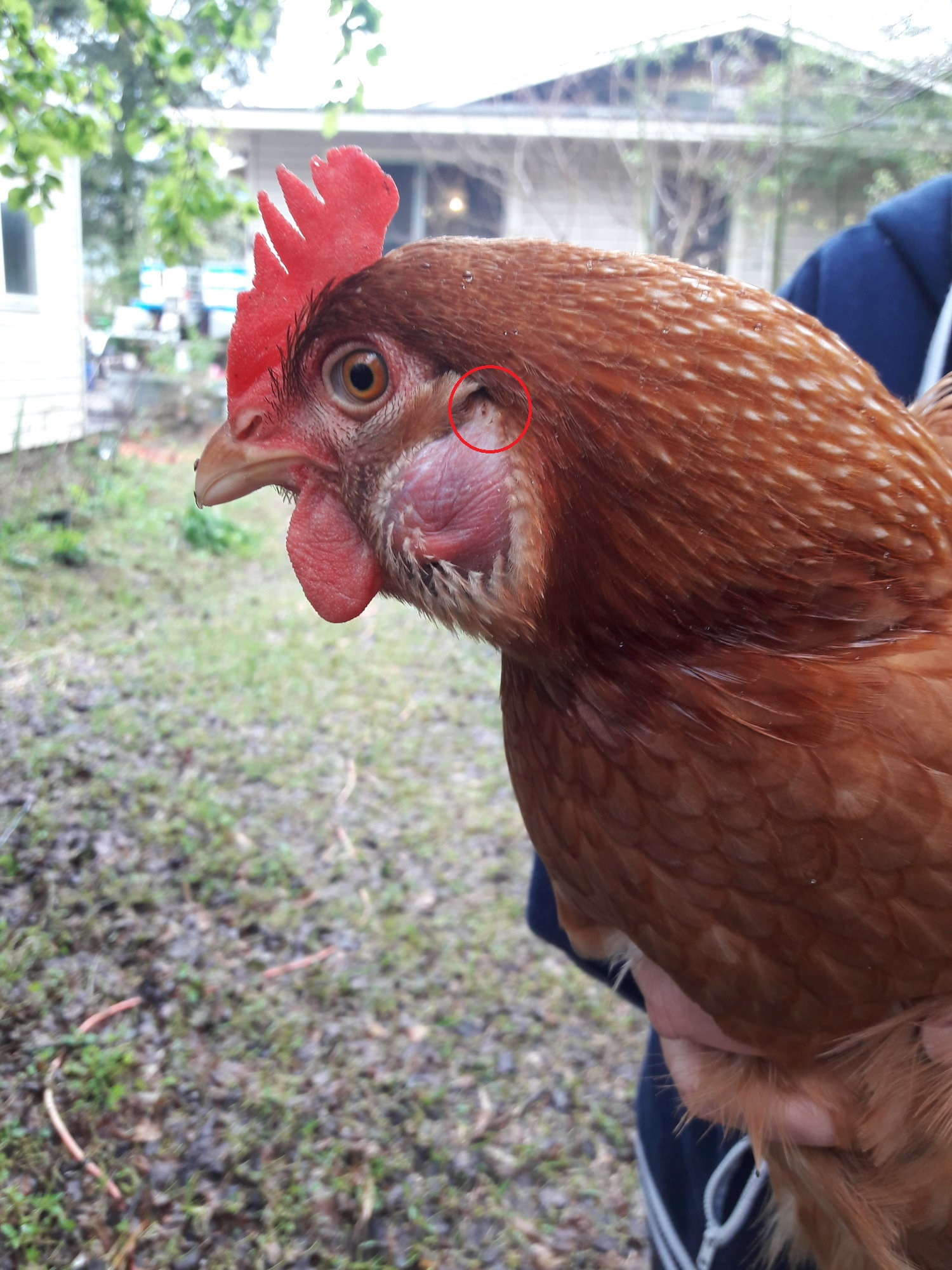 An insect or arachnid bite is a great thought.

I also wonder about a possible salivary gland infection. How does her mouth look on the inside?

Should I give up?