Quote:
Gamefowl are not mean, yes they are territorial. The hens and the roosters make very good pets. But the roosters will fight when they reach maturity. But this is cured easily by putting them on a tether and keeping them spaced apart. Actually I find the gamefowl roos are much more gentlemen with the hens then the dual purpose breeds. Most of my gamefowl roos go through elaborate dances before mating, where my other breeds just chase the hen down and climb on.

Quote:
When they reach maturity they will fight. I don't think raising them together has anything to do with it. My Aseel roo is my favorite and he is very sweet except for him trying to get other roo's

They are not mean at all, to people. (normally) They are very territorial, as WalkingWolf said, and will fight to protect their 'territory'. But that has a lot to do with the breeding, just like certain other animals. I have a few game fowl roosters and hens, and I don't have any fights. I think my dutch bantams are more aggressive (and my stupid lakenvelder) than my games are. My games don't fight to the death like those bred for fighting, but they do let the other roosters know that they are the boss.

There are many types of games, Gamefowl like the Americans, and Orientals (Shamo, Asil, Thai, Brazilian, etc) will fight once they reach maturity and there is no stopping this unless you breed them with non-game breeds and even then it can sometimes be quite hard to breed the gameness out. Chinese games have been said to still be game even with crossed with other birds. They're generally tame to people, but like all breeds you can get that one.. I've grown up around games as they have been around my family for four generations, and i have only experienced 12 mean roosters in my life time.

You may get the large Old English Games from the US, or the Old english bantams and moderns and have no problems with this, but just because they will fight doesn't necessarily mean you should pass them over if you like them.. It's part of what makes them so special in my opinion, and separates them from the other breeds. If they were just pretty like others then why not just raise the others? The game is what gives them the attitude that attracts so many people towards them, im not talking about fighting attitude. But the pride that comes along with it.. There are quite a few videos of Gamefowl on youtube that do not involve fighting, but yes since it is open to everyone from around the world Youtube does have fighting videos from places where it is legal to do so.

I have one American game hen with my other hens, and she's at the bottom of the pecking order. She's very submissive. My game hen is the hen in the background.

I don't have game roosters. 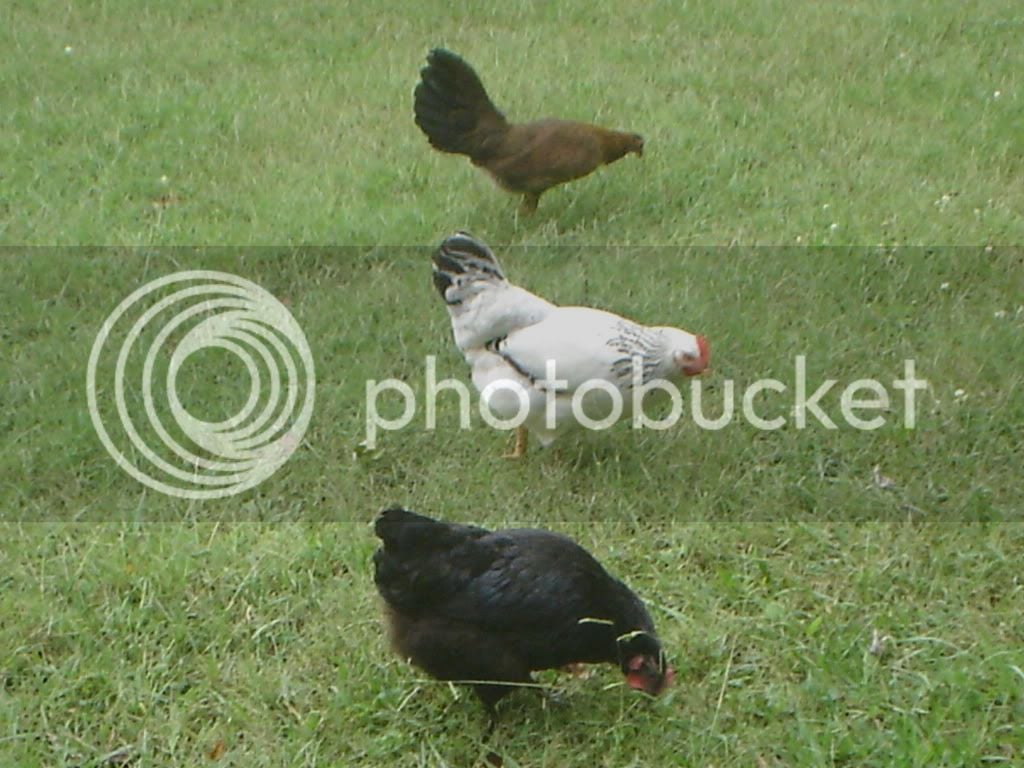 If you like the look of games but are afraid of the fighting there are a few breeds that have the game look without the male aggression. Kraienkoppes I believe is one such breed.

Quote:
Trust me when she has chicks to defend she will be very aggressive. I had a very passive gamehen who brooded chicks when it was very very cold out. So we brought her in the house with the chicks until weather broke. Several times she attacked our very big wolf that got to close to her box with the chicks. She had no fear when it came to those chicks. It was a good thing I had despured her or she could have put out a eye.

Quote:
Trust me when she has chicks to defend she will be very aggressive. I had a very passive gamehen who brooded chicks when it was very very cold out. So we brought her in the house with the chicks until weather broke. Several times she attacked our very big wolf that got to close to her box with the chicks. She had no fear when it came to those chicks. It was a good thing I had despured her or she could have put out a eye.

Dad's hen had chicks last summer, and she just happened to be in the barn with them. I just bent over to pick up the waterer, and I guess I was a little too close to one of her babies. She didn't attack, but she sure wanted to!

I guess she stopped and looked for a split second, and realized I wasn't after her chick.

Now my game hen is totally different. She is aggressive towards the other birds when she has chicks, but if something (or someone

) is trying to catch one of her chicks, she'll peck one as a sacrifice so the others can get away. Shocked the crud out of me the first time I saw her do this, I thought she was crazy! But then I realized what she was doing, and it makes sense. If it were a predator (rather than a 4 y/o boy) trying to get one, the predator would be distracted by a chick laying on the ground, so mama and the others could run for cover.

When eggs come after mating

C
Is this a gamefowl? Also what gender is it?