I'm new to chickens, about 2 years in now, I just have a question for funsies. I recently ordered a mixed batch of eggs, three of which were 55 Flowery, and they were huge round eggs (all three bigger than average). First question, is that normal for 55 flowery?
I also have a few cream legbars. Would it be possible to breed these together, to create an extra large blue egg? Has anyone tried this before?
Just curious

No idea! Can't wait for responses

Came for the chickens Stayed for the drama 🛸🏴‍☠️

My 55s lay really decent size eggs too.
You can breed them together and the offspring will lay blue eggs. How big they would be IDK I would guess somewhere in between.
After the first cross it will get tricky because if you breed back to 55s for size you'll be losing the blue egg gene. If you breed back to legbars for blue eggs you'll be breeding away from size. If you breed offspring together its a gamble what you'll get.
If you really know what you're doing you could end up with birds that do lay large blue eggs but it will take work.
Or for funsies just cross once see how they do. You could just do the crosses if eggs turn out nice size.
Also any way you go you'll be retaining the Auto sexing trait so bonus.

I have done some just for fun crosses. Crosses are useful to see how gene pass (i.e. egg size). If the parent stock is able to pass a desirable trait to a larger percentage of its offspring is is said to be prepotent as is very value as breeding stock. It is often hard to tell what side of the pairing is passing the genes when both side of the pairing are from the same breed. Crosses to other breeds can be set up to make it easy to tell how the gene is being passed and who the gene is coming from (the male or the female in the pairing). These crosses that are designed to prove out stock from breeding are called test mating. So yes...you could do a test mate and see how things turn out.

On a side note my Legbar lay really large eggs. My first year with the breed I breed two cockerel and three pullets. One pullet laid eggs that averaged 68-72 grams with some eggs over 75 grams. The other two laid eggs that averaged 58-63 grams. Only about one out of ten daughters from the hen laying the larger matched the egg size of their mother. I culled all the daughters from that hen that didn't produce the larger eggs. I kept at it with that breeding line, only breeding hens that produced eggs over 68 grams. After 3 years I was getting 1 out of 4 that laid the larger egg. After about 6 years I was getting 50% laying the larger eggs. So...from what I saw the large eggs was not a dominate trait and hard to maintain.

My experience with other crosses are that the egg size it typically between the size of the two lines used in the cross.

The First photo is 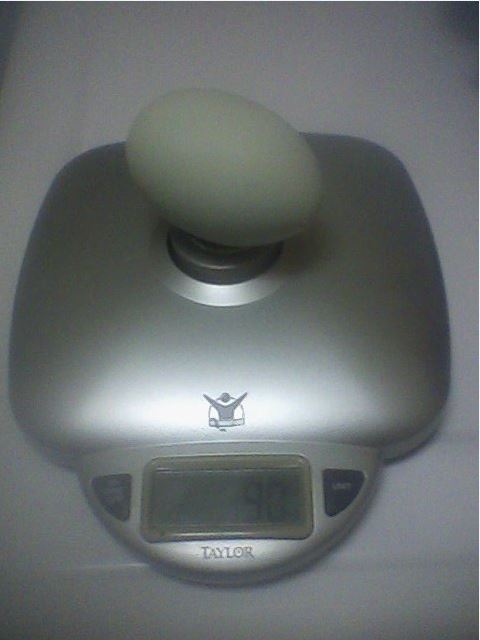 an egg that we got about 3-4 years ago from our Legbars. It came in at 90 grams and turned out to be a double yolker. This year we had a pullet that laid eggs this big and larger about twice a month. Some of them were double yolkers but most were since yolkers. I think the largest one she laid was about 120 grams. The second photo is from the hen we have that was laying the huge eggs this year. It was a single yolked egg. Big Blue eggs are definitely possible. for the past few years we have been legbanding all offspring from hens that average eggs over 70 grams is size. It helps is selecting cockerels, etc. 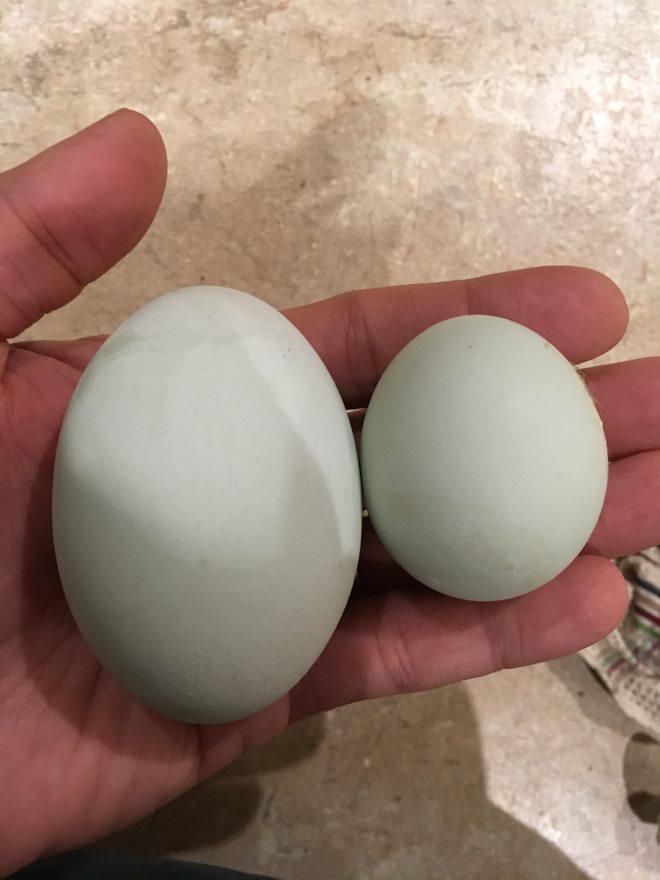 Trying to figure out what potential egg coloring I could get from a particular pairing.