Come say hello to @MaryJanet! She has been a member since December 2018 and comes to us from from Adelaide, South Australia.

I'm going to describe a few things that are important to me because I think it will show who I am better than a description of myself. I live near the beach in Adelaide, which is the capital city of South Australia. My great-grandfather provided the house I live in, so I get to spend my days in the rooms my ancestors and family spent their's in and the walls of the house feel like a big hug to me

I haven't lived here long. Dad died in 2014 and his estate was settled in 2016. Unfortunately Dad never finished the renovations he started, so the place is rather ramshackle. I've been doing all I can for it and it's gradually becoming a comfy old home again.

In addition to my house-related adventures, I choose to work hard. Mostly my work is paid, but I also work in several voluntary roles because it satisfies my altruism. A few weeks back, my work brought me into the public gaze in a good way, which was very scary and gave me a much deeper appreciation of simply sitting with the chickens and feeling the sun on my back.

I only have hens, although I have known two very good ducks (Daddles and Bruce, fondly remembered) and my mates on byc have revealed how awesome roosters can be.

We had white laying hens when we were kids and I used to feed them blades of grass through the chicken wire and try to hypnotise them ("you are feeling sleepy, veeeery sleepy"

: and that was not going to happen on my watch! Poor Dad was not able to catch a single hen that day

When I eventually moved into the old house, the "garden" was full of weeds. I kept up with the front garden, the side garden, the pergola, the beds, the future lawn area, but I couldn't get the back patch weeded too. There simply wasn't enough time, given all my other commitments.

So in November 2017, three beautiful chickens came to live at my house: Dora, Nigella and Alice. And enter one prefab flatpack coop suitable for "six" hens. They didn't say it was six newly hatched chicks! 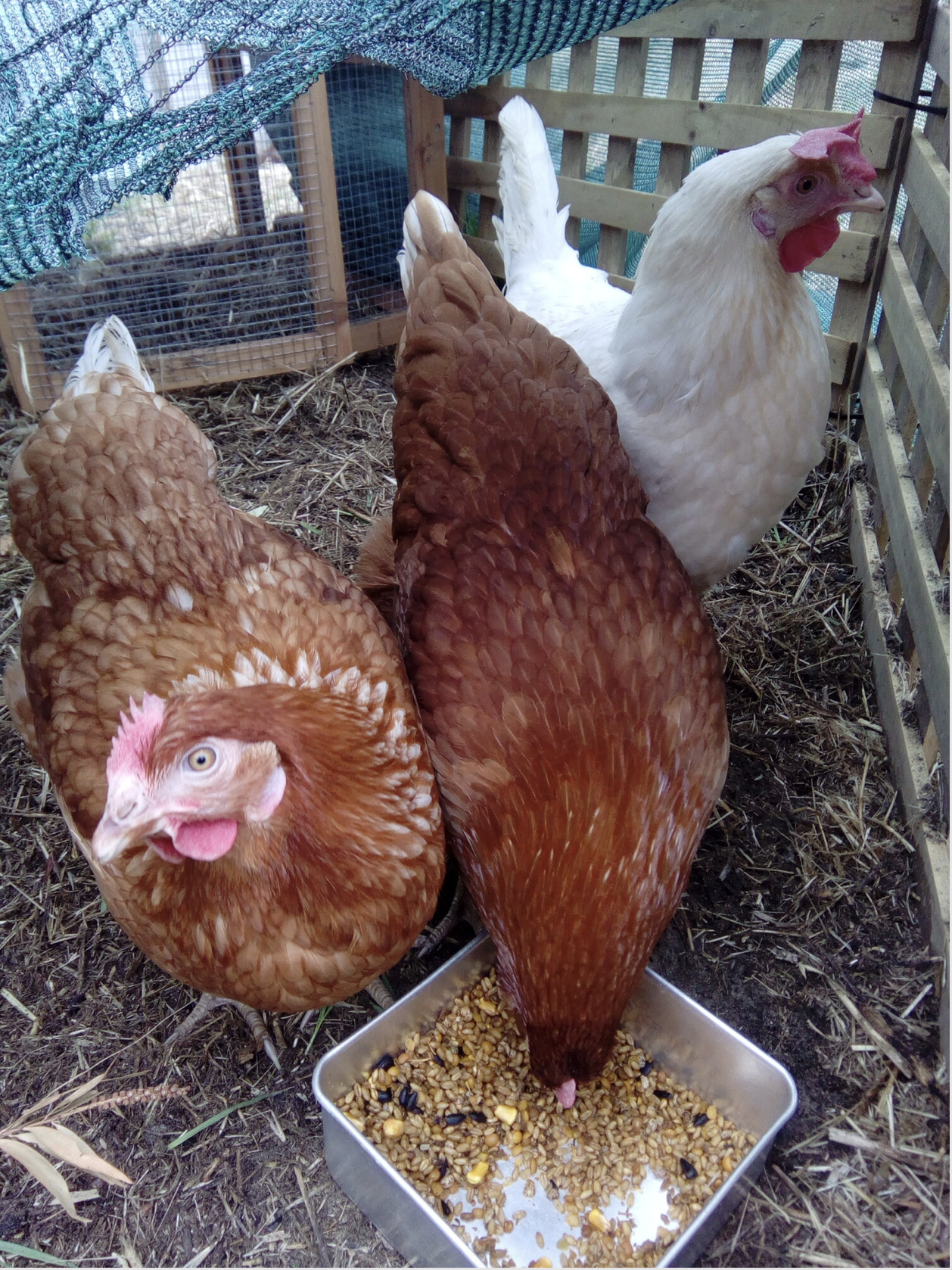 That's a joke, it's not actually that small, but I would think even one fully grown chicken would find it too small.

I made a lot of beginners' mistakes with those three little ones. Coccidiosis. Insufficient space. Insufficient protection from Mr and Mrs Fox.

Dora, Alice and Nigella did not survive long under my enthusiastic, loving, but completely inadequate chicken keeping

In November 2018, I bought and installed a big henhouse with a fox-proof floor. Then I added additional fox proofing. When it was ready, Janet moved in, then Mary joined her two days later. 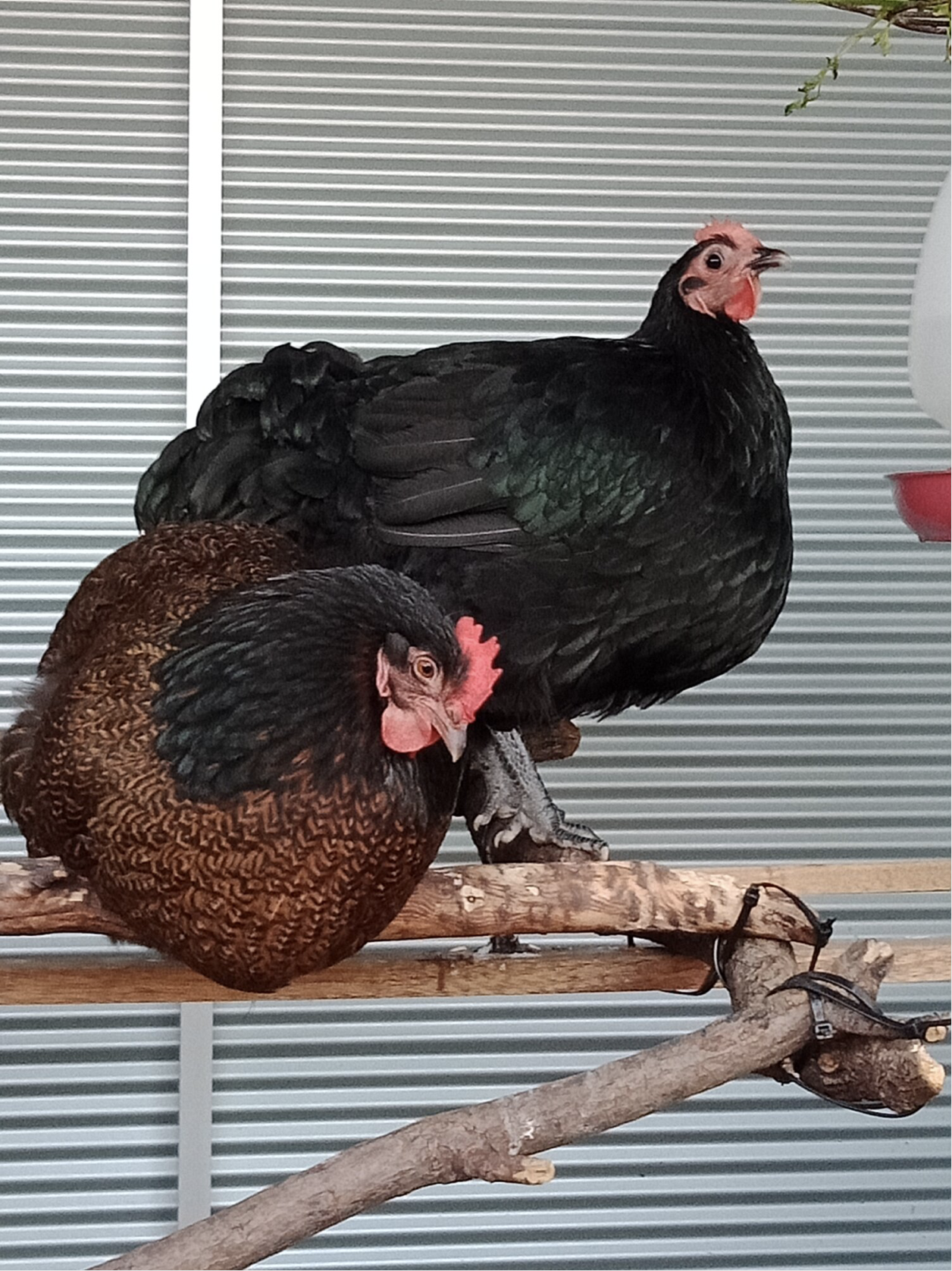 In April 2019, Sandy joined in. She was found wandering around the streets by friends of a friend. Her finders door-knocked and put out notices on social media but her humans could not be found. So I gave her a home until someone piped up to claim her, which never happened. 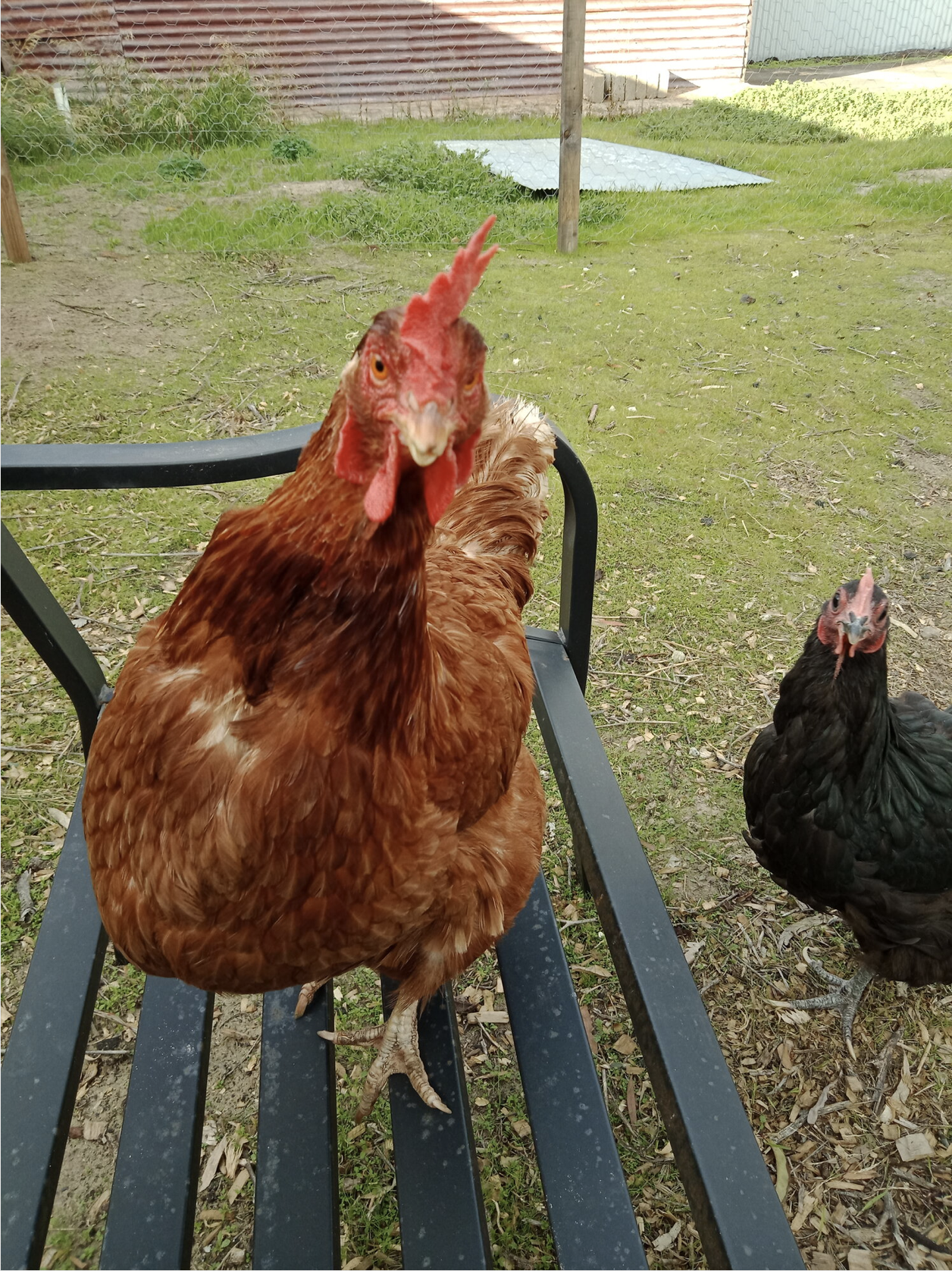 Finally, in January 2020, Ivy and Peggy joined the flock. 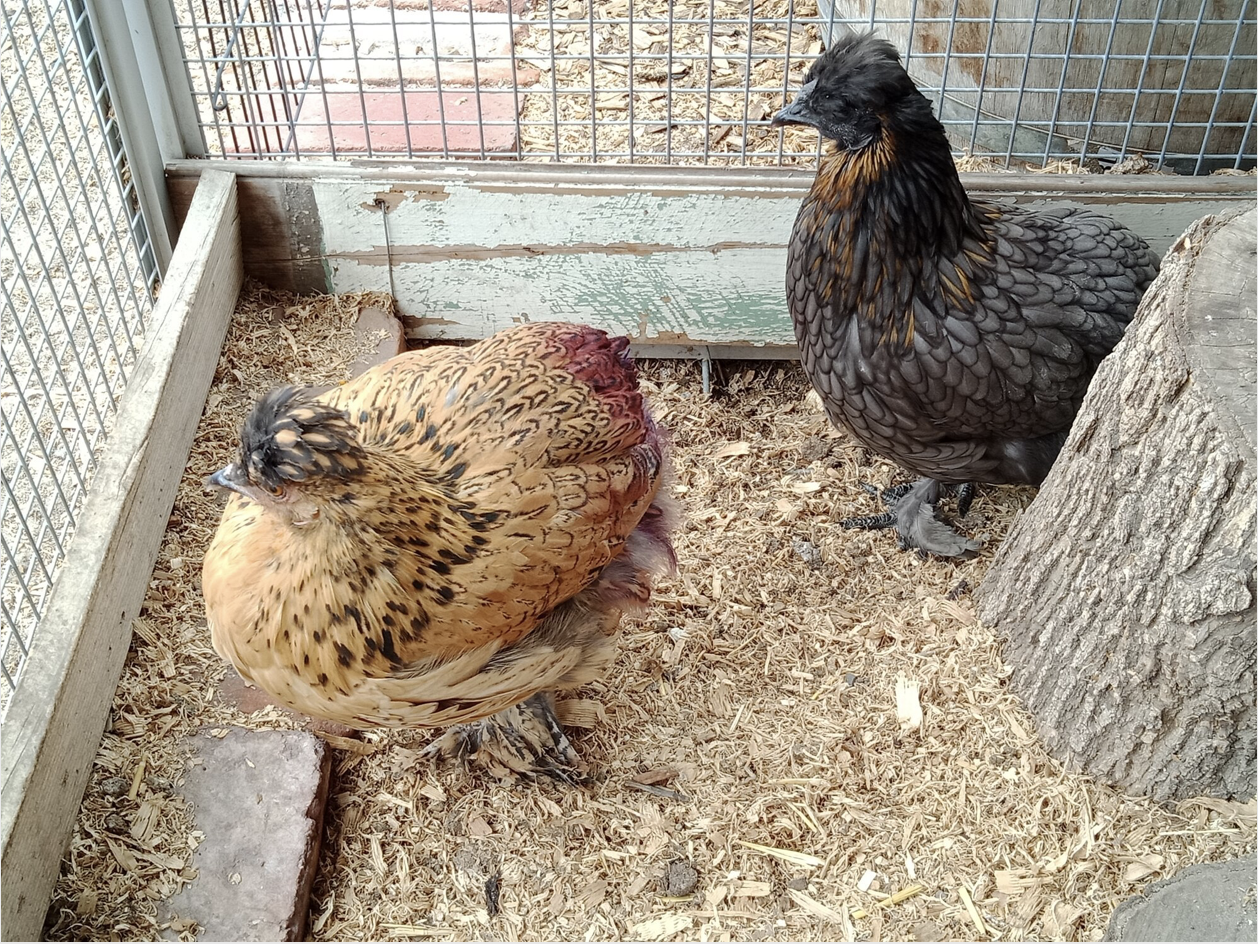 A few short weeks later, Sandy's health took a turn for the worse and she was hospitalised for a weekend for observation and then euthanised. She was a red hybrid laying hen, bred to lay fast and die young and she had a serious uterine infection. She is very fondly remembered.

So far, the remaining four hens have survived (although we recently had a close call with Peggy) and when I've got a spare moment I write about their adventures on MJ's Little Flock (in which MJ is me, not Michael Jackson).

3. Which aspects of poultry keeping do you enjoy the most?

This is a hard question because I'm splitting hairs.

I'm going to say the friendships I have with each hen. For example, Janet has always been standoffish, but when Mary and Ivy were broody, Janet only had Peggy to talk to and no one to supervise. So she chose to peacefully spend her time around my ankles, sitting or scratching, sometimes sunbathing. Until then, I hadn't realised she had so much trust in me.

So that's what I enjoy the most. Realising trust has been growing all along.

I had an old sawhorse in the chicken's yard to sit on when spending time with them.

One day, Dora jumped up with me, no surprises in that because she liked sitting beside me.

But this time was different because she let out a big sigh and really leaned against me. She was having a cuddle puddle with me

5. What was the funniest poultry related thing that has happened to you in your years as an owner?

This is also a tough call because they're funny almost every day.

Ah! I've got it.
It's the time Peggy flew quite a long way, maybe at knee height, with her haunches hanging down

Since that day she doesn't bother flying, running is much less scary and much faster for her!

6. Beside poultry, what other pets do you keep?

One old cat called Blossom. She's quite intimidated by the hens, poor thing. 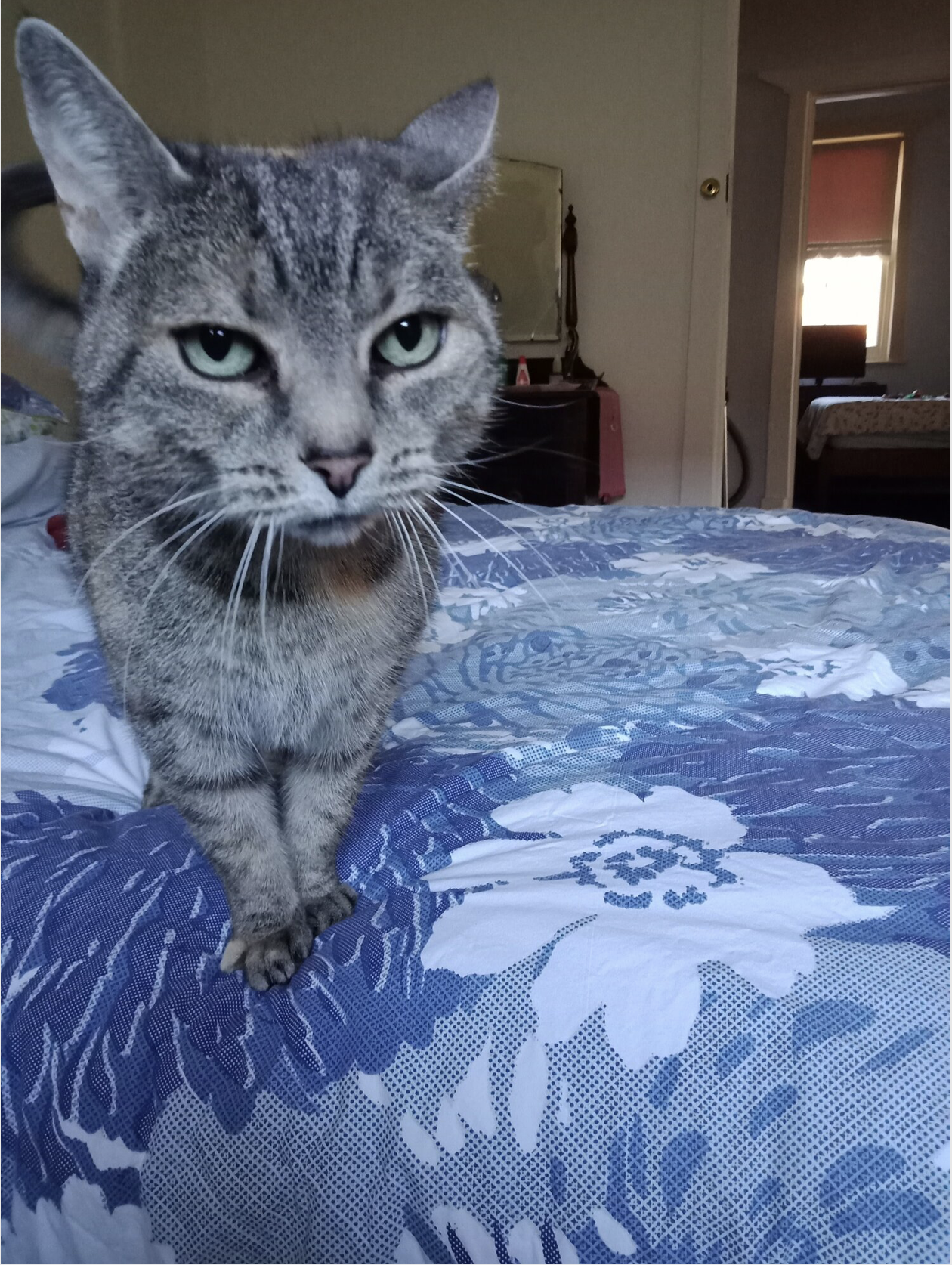 7. Anything you'd like to add?
Thanks for inviting me to share a little about my life and thanks to anyone who reads my words

@MaryJanet ​
For more information about the interview feature and a complete list of member interviews:
introducing-vip-member-interviews.905602​

Thanks for the interview!

Thank you MJ for sharing some of your story with BYC. It is a pleasure to get to know you better

What a great interview! Thank you for sharing your story with us!

Thanks for the interview MaryJanet!

Surprisingly, I learned some more about you my friend. I'm so glad that you did this. Just a wonderful interview.

You truly are one of the good ones.

It's very nice to meet you @MaryJanet . You have some gorgeous birds.

Such a pleasure to read your interview! Nice to meet you as well

Your adventure sounds exciting and I'm dying to see what this house, part of your history, looks like

Thank you for the wonderful interview MJ!