Chick With Bubbles in Eyes and Shaking Its Head

I think I have a disaster at my house, but I'm not sure. I apologize for the long story. I bought some hatching eggs on ebay and hatched a single chick out of the eggs purchased. It was entirely my fault, I think, that the hatch went so badly. The poor thing had a difficult hatch, too. That was bad enough, but immediately on hatching and drying out, the chick shook its head excessively. I looked closely and saw very tiny bubbles in its eyes, and the corners looked a little bit watery, but not bad. Unfortunately, I had two pullets in the same room where the chick was hatched and brooded for the first couple of weeks.

Those were the only symptoms that appeared that I noticed. The chick is now about 7 weeks old, and looks well. Its eyes are seemingly clear, and it no longer shakes its head. I have kept it isolated from the rest of the chickens, but if it is the dreaded Mycoplasma gallisepticum, the others are likely already infected.

My other chickens have shown no symptoms whatsoever, but appear as healthy as ever.

Any advice regarding this situation? Any experience with these symptoms in newly hatched chicks?

Could it be something other than Mycoplasma gallisepticum?

I have bantam Buff Brahmas, and I had hoped to hatch some chicks and sell them locally. This does not appear to be possible if I have Mycoplasma gallisepticum in my flock. Am I correct on this?

This makes me very sad. It is a bantam Speckled Sussex, and it is very sweet and friendly. I wanted this breed so badly, and to have it all go so wrong is disheartening. 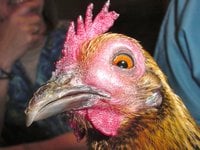 It's impossible to know what precisely it is without a diagnosis from a vet. At least you have read up on the subject and are responsible enough to realise that you may have to keep a closed flock (i.e. not sell or give away any live birds).

I have no experience with newly hatched chicks showing such symptoms, but I have had to deal with respiratory viruses in the past. I really should have culled the whole flock and started again - but it took me 2 years to do it (not because my chickens are pets, but because I did not envisage selling / giving away birds). It's a decision I wish I had made earlier.

Having said that, I'd see what a vet says before thinking the worst, but considering your options, in preparation for the worst is worth doing.

Hi, Nyla. Yes, that is the chick now. It never had any swelling at all, just shaking its head and tiny bubbles in the eyes, which are now gone.
M

It is a very, very sweet chick.

I would say that the chick just had some problem with it's eyes after hatch. Eye bubbles are not always a sign of MS. Even pecking to the eyes or an insect sting can cause that. If the chick never seemed ill once the eyes cleared, I would say it is healthy. Chicks with MG usually around 3 weeks old will have sneezing, look weak and ill, and have a runny eye with a swollen eyelid. You could call your local vet or agricultural agent to get the chick tested if you are still worried.

Eggcessive, thank you so much for your reply. I cannot have any testing done at this time. I have wondered if something could happen during the hatch that could have caused respiratory inflammation that was not bacterial or viral, but simply irritation. The chick appears quite healthy in all other ways, and as you can see from the photo, its eyes look quite good now.

M
Bubble in one eye

A
HELP! RESPIRATORY PROBLEM IN CHICKENS