i was hoping to get some input from others on a silkie chick that hatched out last week. He was huge when he hatched, biggest silkie chick i've ever seen pop out of an egg. But from the start, his legs were real wobbly. As the other chicks got their bearings and could stand, he couldn't. i thought it might be spraddle legs at first, so did the bandaid treatment. It was a disaster, as his legs could not support him at all. Coincidentally, i had another batch of chicks hatch right after, one with severe spraddle legs. But once i put on the bandaid, she could stand and sit and walk around. So that made me think something else is going on with this little one.

My gut said that maybe he just needed some time and nourishment to get strength in those little legs. And over this past week he has gotten a bit stronger. But his legs are still very shaky and he can only hold himself upright for a bit and then he flips over on his side, then flips and struggles until he can get right again.

i have him in a crate lined with towels, with divets and ridges so he has something to brace against. His favorite spot is a cup shaped area in the corner, where he can stand up almost straight. i have food in with him and he can stagger or flip over and eat, but i'm afraid to put water in for fear he would end up face first and drown. So i am in there every hour to two hours, pulling him out onto a washcloth surrounded by a towel circle where i make sure he eats and i give him water in a water bottle cap.

i'm giving him polyvisol (w/o iron) a couple drops a day and avia charge 2000 in his water. i'm not sure what else to do, but i tell you, i am exhausted! i thought i read somewhere on this board about someone putting their chick in a dixie cup or glass to help them stand upright, but can't find that post now.

i'm sorry this is so long. i'm just very frustrated as i'm not sure what i'm dealing with or how to help him better. Any information or suggestions would be very much appreciated.

Here is the little one, Care Bear, sitting in his little towel hole: 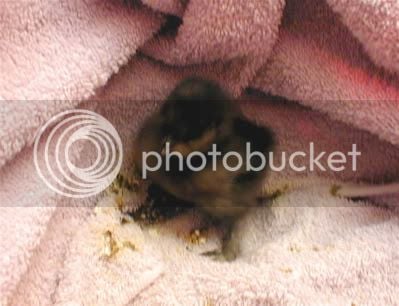 and here he is pulled out for feeding: 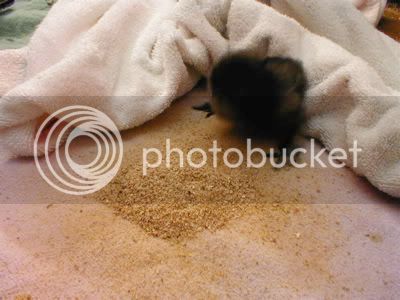 Big chicks are usually pretty crammed in the egg. Sometimes they need a little physical therapy when the hatch to get their legs working properly. I had a chick two years ago that was stuck in the egg for a few days. He hatched with help, but he couldn't walk because his legs were so cramped. He couldn't even stretch his legs out as far as a normal chick. So I gently pulled the legs twice a day to stretch the muscles and tendons. It hurt him, he screeched, but his legs slowly got better and he's doing great today. Keep him on the vits and minerals for sure. Sounds like you're doing everything else right.

Thank you for the advice. i never thought about stretching the legs out. i do massage his hip joints when i take him out for watering and feeding. And other than the weak legs, he seems pretty robust. He loves to eat and really tries like crazy to get around. Sometimes i put another silkie his same age down with him when he's eating and that really gets him going. He's doing all the normal baby chick stuff, except for being able to stay upright all the time. Guess i'll go work on those legs!

It took my chick about a week before his legs were fully functional. Stretch them as far as they will go, but don't break em (almost straight, but still noticably bent if that makes any sense)! Try feeding him some high energy foods, like sugar and milk. That might help him out a bit too.

I have a similar problem, i know this thread is 9 years old but I wonder how he turned out.