We think we have a chicken with post traumatic stress disorder and she has been causing lots of problems, like bloodying up a chicken and ripping out feathers of others. This hen is named Ember and a little less than a year ago she got given to us after her flock was slaughtered by a wild dog attack and when we got her she had a torn and chipped beak, ripped skin and feathers, and missing feathers. We think this might have been the cause of her violence and we don't know how to get her to stop. One of our poor hens won't leave the coop (unless Ember is laying an egg) because she is hiding from her. My mom thinks we either need to get rid of Ember or put her down, or somehow leash her so she has a fairly small area for her to be in. 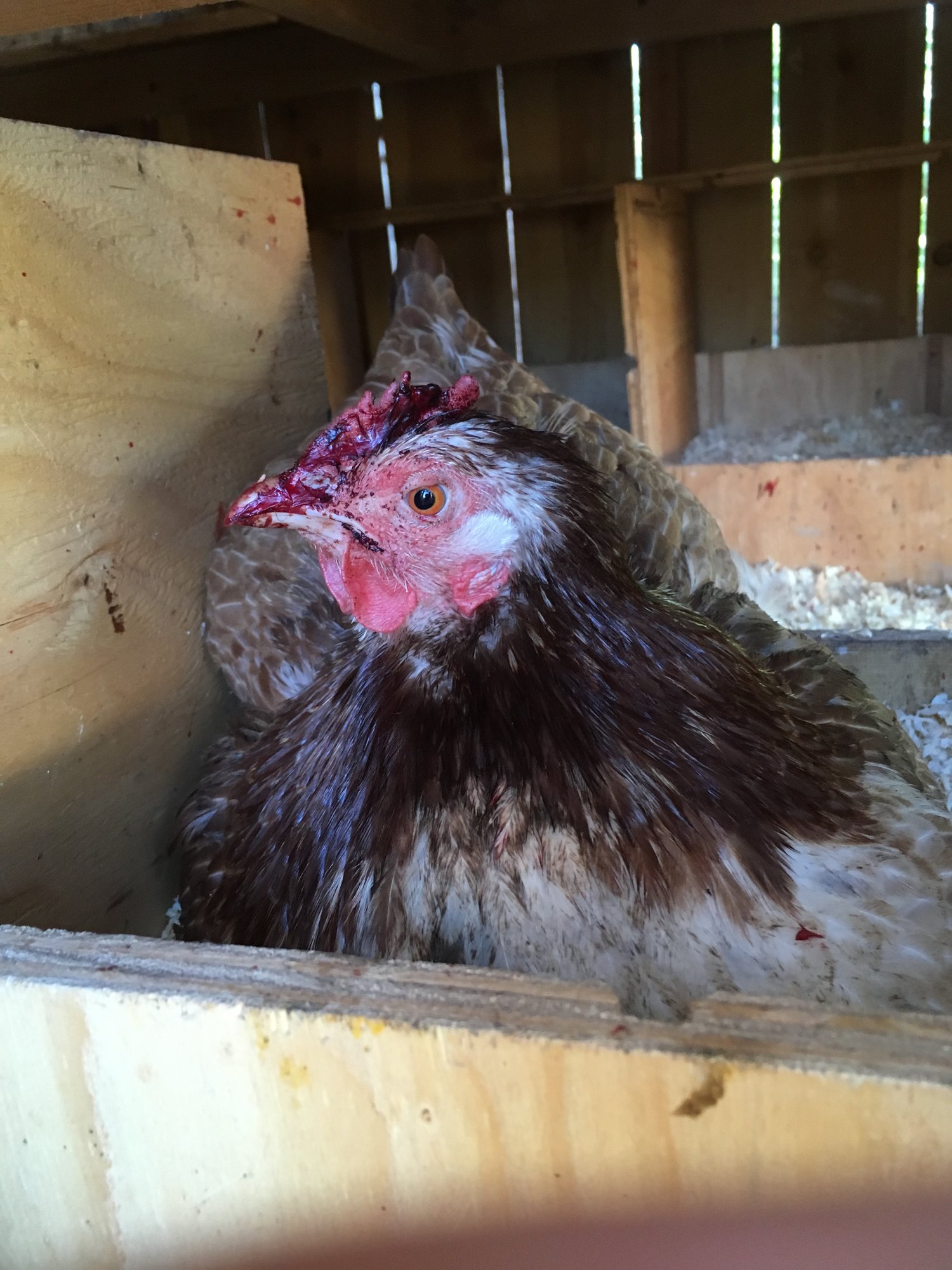 This is what she did to the hen who is now hiding in the coop. There was literally blood splattered everywhere. This hen's name is Roasted Marshmallow, we usually just call her Marsha (Marsha, Marsha, Marsha) or Marshmallow.

Oh, the thinks you can think up if only you try!

Poor Marsha! I hope she feels better soon.
I've not had this problem with my girls, but have you tried separating Ember from the flock for a bit? I've read here it seems to help with bullies, maybe Ember would benefit.
I had a rooster that beat up one of my girls and she was always hiding when he was around, and stayed away from the flock. We no longer have him.

What breed is this perpetrator?

She may be a breed known for troublemaking.

21hens-incharge said:
What breed is this perpetrator?

She may be a breed known for troublemaking.
Click to expand...

She is a black sex-link. This is the best pic i have of her and she is standing next to Marsha. This was just after Christmas 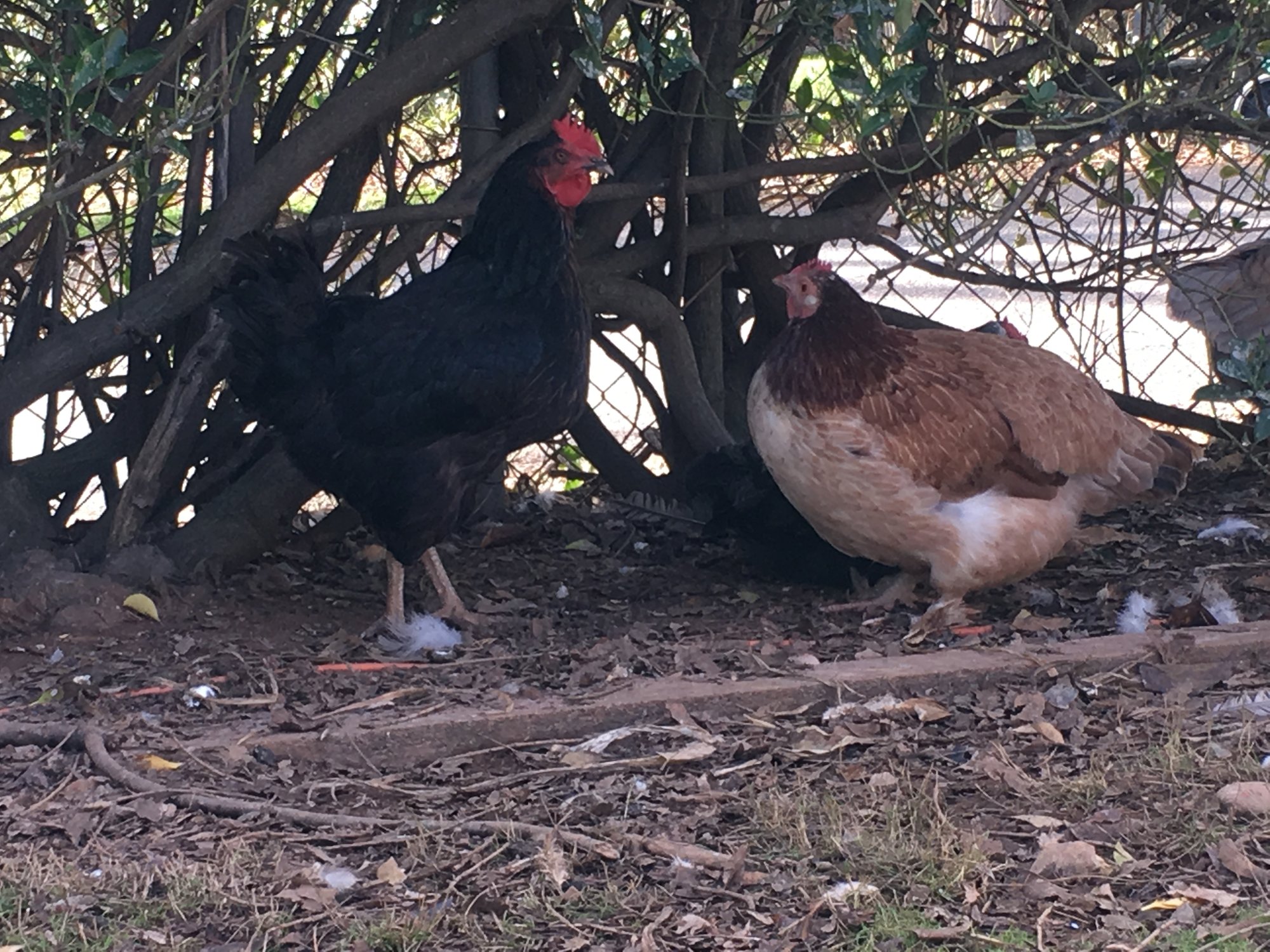 We used to have another black sex-link, but she died last year in june due to liver failure. She was the head of the pecking order and super sweet.

You may not like what I am about to say.


I have found Black Sex Links to be rather vile to docile birds.

I agree with 21hens-incharge...
I don't care for black sex links. I was thinking "probably a sex link" before even seeing what she was. I would get rid of her.

Looking at the pic Marsha is a favarolle.

Read as one of THE most docile breeds known to man.
Poor girl.

im not one of those oh dont kill the animal people, but in this scenario i would not recommend putting her down right away. try separation at first. separation changes the pecking order and allows for another chicken to rise up and take that role, hopefully less dominant. maybe for a month or so then try again. worst case senario have a separate pen for her for the remainder of her days or put her down.

21hens-incharge said:
Looking at the pic Marsha is a favarolle.

Read as one of THE most docile breeds known to man.
Poor girl.
Click to expand...

Tell that to Marsha's "sister" Sassy. She is one heck of a fighter, you should have seen the fights between her and the rooster on day one. If any chicken intimidates Sassy she pecks them away or fights them if they try and dominate her. Her and Marsha used to have fights all the time, without actually pecking each other. They just jumped over each other until Sassy won. (She wins every time)

C
Could this chicken be broody?

Mama is being bullied