Sorry, I tend to ramble. I also like photos. Hope you guys do too.

(1) Are you new to chickens / when did you first get chickens?
I got my gals a bit over a year ago, but before then I was as good as new to chickens. I'd wanted chickens for a while, then I bought my own house and the rest is history.

(2) How many chickens do you have right now? and (3) What breeds do you have?
I only have two, She-Ra the gold lace Wyandotte, and Yori the Rhode Island red, from a local guy who was thinning out his own backyard flock. She-Ra was pretty much useless with no redeeming qualities for the entire first year I had her. Thank goodness she finally decided this year that she should lay eggs like a normal chicken. Yori, on the other hand, has been great. Laid eggs reliably from the start, super friendly, and insists on talking ALL THE TIME. And if you don't talk back? Well clearly that means she needs to YELL LOUDER. And if I go back inside when she's not done talking to me? She stares at me through the window, waits until she sees that I see her, and then BOOOOOOOK BOK BOK BOK BOK.

Yori will murder you for peach skins though.

(4) What are your favorite aspects of raising backyard chickens?
They're very entertaining! It's fun seeing what things they are afraid of (reasonable things like hawks, chainsaws, cats at night, and falling trees) and what they aren't afraid of at all (the lawn mower, the weed whacker, power tools other than chainsaws, cats during the day, fireworks). Also, I like having access to eggs I know come from chickens who are not fed the food I'm allergic to, and who are cared for the way I want my food source animals to be cared for.

(5) What are some of your other hobbies?
I play violin (modern and baroque), write, do art, beading and seed beading, costuming, try to garden...

(6) Tell us about your family, your other pets, your occupation, or anything else you'd like to share.
I'm a registered veterinary technician and right now I only work with cats. So obviously, I have two cats of my own. I also have a cornsnake, Noodle, two tropical fish tanks, and eight betta fish, seven of which are siblings from the first pair that I bred last year.
I'm in the American South and my chickens are melting. (Not really, but Yori goes on egg strikes during the hottest weeks.)

(7) Bonus: How did you find BYC, how long have you known about BYC, and what made you finally join our awesome community?
I'd been prowling the forums and articles for probably 6 years in preparation for getting my ladies! Then when I took them in for their new pet checkups, the vet said she got a lot of her deworming info from the forums here, because actual published veterinary info on egg-producing pet chickens is rather sparse, in my experience.
And then I still didn't join, until now, when I got the exam reminder cards in the mail, and remembered the vet had said I should join.

And now, who doesn't want some photos? 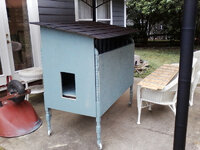 This was their first coop, which I made from my old baby crib. It had a pen made from pvc pipes and chicken wire that attached to the front, so they could go in and out during the day. And it did actually roll around the yard on those wheels! At least, until they got stuck in the mud, and I didn't realize it and kept pushing, and one of the legs snapped. It stayed upright fine but I couldn't move it any more, and since that defeats the purpose of a moveable coop, I made a new one. 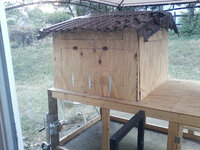 It's ugly but it gets the job done. Even if it weighs four times as much as the last one. This thing took me a year to build (with lots of not actual working on it during that time). All I had was a screwdriver, a power drill, and a circular saw. And myself. I recommend finding someone with slightly more DIY experience to help with something of this level of DIYing. 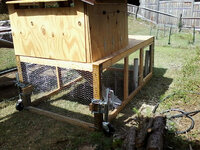 The back side, with the wire attached, the ramp in place, and their water tubes ready. To move this 300+lb monstrosity, you simply lower the wheels 6 or more inches, lash a rope through the hooks on the front end, lift the front end up the one inch you can manage, then scurry backwards like a deranged scarab beetle. 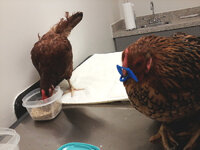 The ladies at their vet visit last year. Yori's got her head down in the food dish, the glutton. Her feathers were all torn up by She-Ra at the time. She-Ra is extremely pouty because she got the glasses of shame put on about thirty seconds before this photo was taken.
They're pinless peepers and yes they did work. She-Ra still takes jabs at Yori, so I don't think Yori will ever have nice smooth feathers on her back, but at least she's not bald and bloody any more.
Yori would not shut up during the whole appointment. The vet told her to be quiet and she just stared at the vet and BOOOOOK BOK BOK BOK BOK.
They were given a clean bill of health other than roundworms and... 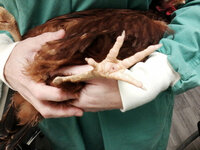 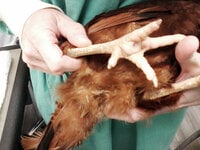 Poor Yori had bumblefoot on both feet. Thankfully, it wasn't bad, and it cleared up quickly with a few epsom foot soaks and having soft clean bedding + actual grass to walk on. 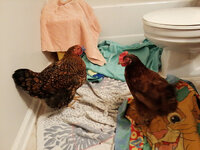 Earlier this year, Yori got herself a dirty butt and needed a bath. I couldn't leave She-Ra outside alone because she panics when she can't see Yori, so I had to bring her in too. She just froze and didn't move from that spot. Yori was surprisingly tolerant of the whole bathing and blow-drying process. She of course talked the entire time.
There has been one other indoors adventure: 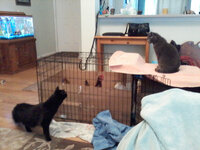 I'm far enough inland that it takes a really determined hurricane to cause more than a hard thunderstorm's worth of damage. Well, we got one such hurricane last year. The ladies were still in the original crib coop at that time and it held up surprisingly well. I had to put a tarp over it to prevent rain from coming in the larger vent holes and well...the hurricane blew that clean off and the coop flooded. I couldn't leave them out in a wet coop with nowhere dry to sit, so I rigged up their travel cage and a large dog crate a coworker loaned me in my living room.
Kibu (black cat) and Shadow (grey cat) were Very Suspicious. She-Ra and Yori were likewise Very Suspicious. 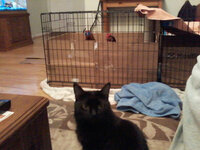 They were all fine. The chickens were so excited to be back outside after a week that She-Ra actually went run-flapping around the yard for the first time since I got her. Thankfully she can neither fly more than six inches above the ground nor in a straight line. The only down side is that now they think they are entitled to come inside at the least sign of bad weather.

@tn_artist Yup, exactly! I used to do cosplay back in the day but I'm more interested in historical costumes now. Or following the patterns for such clothing, at least. Pretty sure they didn't have iridescent lame back in the 1730's.

Hello, and welcome! Glad that you joined! Good luck with your hen's! I see that you are interested in gardening. @Compost King lives in your state and he can tell you all about using chicken's to help the compost pile for the garden.

Good evening and welcome to the BYC flock!!! What beautiful girls you have and a fun life with them. Love the pictures!

Hi, thanks for joining us!

@BlueBaby My idea of gardening is mostly 'throw plants in the ground and see if they live' which in my part of the South actually mostly works. I keep trying to remind myself to check into composting though, that's another minor reason I got the ladies!
Share:
Reddit Pinterest Tumblr WhatsApp Email Share Link