This weekend I plan on putting my 11 week old chickens in with my 16 week old batch. They have been living side by side for about 5 weeks. My worry is the roosters. I ended up with an EE roo in the older batch and a Barred Rock & an Australorp roo in the younger batch. Is it safe to introduce the two younger roos with the rest of the group, or will the older roo give them a hard time? The younger group is still smaller than the older group, but not by a whole lot...except that the older rooster is quite a bit larger than everyone else.

I could leave the two younger ones in a "bachelor pad" where the younger group is living now if need be, but my preference would be to have them all together if at all possible. Should I put them together and just see what happens, or not take the chance?

I did not plan on having more than one rooster, but here I am

and I'd like to wait until they are older to see which one I would keep if they didn't all get along or if they are over-mating the girls. Once the two flocks are united, I'll have a total of 15 hens with the 3 rooss (which I know is higher than preferred).

This is what I had when I first moved two flocks side by side. 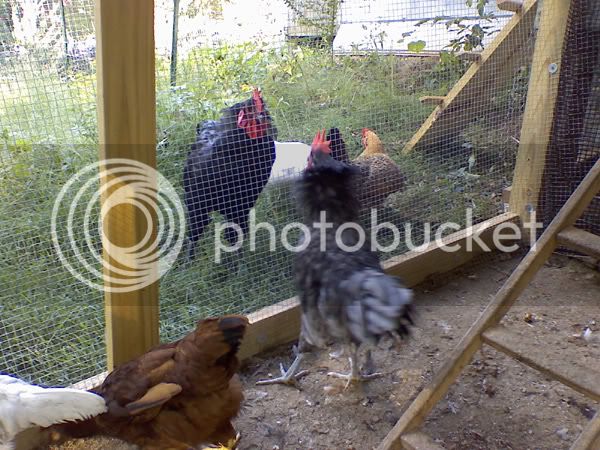 My older (black) roo is pretty laid back.......the little roosters ran for their lives in the beginning if the big flock got anywhere near them......now they all mingle happily. My black roo is about 29-30 weeks old, the younger (two) roos are about 18 weeks now. They have been living peacefully together for about a month now. I expect you will be fine if they have enough room to get away from each other. Mine were introduced in a 1/2 acre fenced yard, and had been sleeping in the same coop at night even when in separate pens.


Btw, although only 2 of my 3 roos are "servicing" the girls so far, I have found that it takes all 3 to keep track of them. I have only 14 girls now, but will be adding on at least 4 more. My big black Jersey Giant roo can't seem to handle more than about 7. He is a slacker

The two younger boys have been picking up the slack and assuming they don't overdo it or start fighting, I will keep a slightly higher rooster 'ratio' to make up for the big slacker

He takes good care of his select few but kind of ignores the rest. The younger boys are thrilled to have his "leftovers". The girls just want food

Roos and their hormones!

I think that pic is kind of hilarious

For comparison, here are the same black and blue roosters now.... 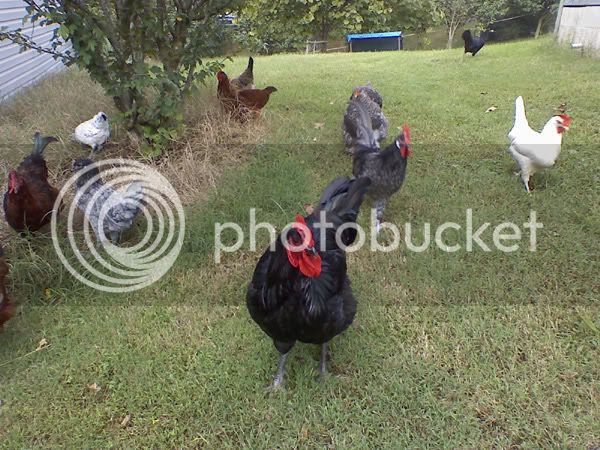 There is also a RIR roo at the very left...the one with only two tail feathers. He is a wimp. The blue roo is slowly working his way up the totem pole and only has the big black roo and I think the big black hen left above him.

I do expect some "power struggles" once they are older but so far so good. The black roo is the head roo, blue roo is close behind, red roo waaaaay down at the bottom.

I did use to have a much more aggressive RIR roo and don't think he would have tolerated my Jersey giant roo. I got rid of him before even attempting an integration. I think you will be fine if they have a lot of space...if you are merging in a smaller pen area, you may have more problems (although you still may not have many).

Getaway Gal, how do your roos behave through the fence? Mine fought horribly for a few days (although without damage because of the hardware cloth). Then they mostly got over it. Once the fence was removed, the younger (blue) roo really did not seem to want to pick any fights (hahaha). He is less than half the size of my big guy, but much fiestier, so it kind of evened out.

Here is the Learning Center page that has advice about roos that may help you.

The roosters are just fine through the fence right now...no fighting whatsoever. The two younger ones don't act rooster-ish at all yet. The older one crows and looks like he's showing some interest in mating, but is not overly aggressive. He just seems like he's getting bigger every day, and I wouldn't want him to terrorize the younger ones.