Mr. Cookies is so happy to get to use his power tools. I'm going to have to find more projects for him to do.

This is based loosely on the minimal plan from the Building Chicken Coops for Dummies book. Very very loosely. 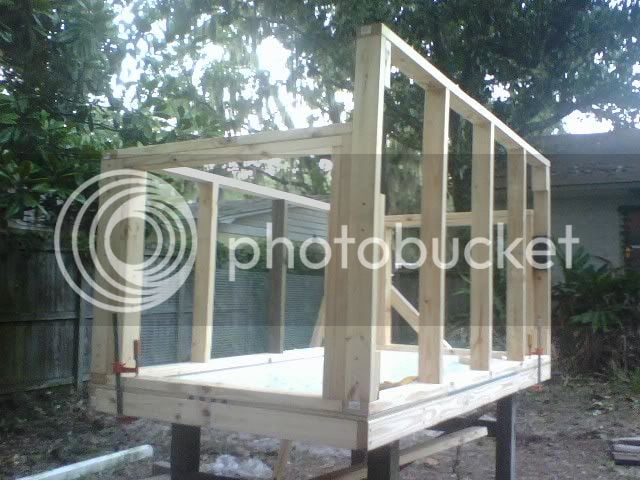 Mr. Cookies already had a structure in the backyard that was set in concrete. So instead of trying to dig holes of the exact right depth to make the corner posts level, he just hacked off the top of his parallel bar assembly so that the corners were level.

Base is 4'x8'. Tallest wall is 4 ft high. Lower side is 3 ft.
Vents will be installed
- in the triangle made by the roof and end walls.
- under the eave on the tall wall
- at the floor level on the short wall

Roof will include 1 ft eave all the way around.
Floor is vinyl from Home Depot. I wanted a cheap remnant, but the 48 cents per square foot stuff was just fine.

The pop door will be on the tall side (right hand in the picture), which will be enclosed in the run. (Run design is TBA. I was going to incorporate the coop with the swing set, and make the A-frame part of the swing set form the frame of the run. But his decision to use the parallel bars as his base changes that. We'll see what happens.)
The end facing the camera will have one large door for cleaning.
The far end (the end near the house) will have the nesting boxes.

Putting the access door on the short side means you'll have to crawl inside to reach the other end of the coop. You can't reach in 8 feet! I have a 4' by 4' coop with one whole wall that opens up for access and I can pretty easily reach in all the way to the back of the coop. You could put a second access door on the other short side, or you could put access doors on one of the long sides, probably the tall one because otherwise you'd be standing in roof runoff on rainy days.

About the vents: the triangle vents on the sides are going to be tricky to make covers for. You will certainly want a cover for the vent you're putting at floor level because otherwise a low vent plus a high vent = draft, bad in cold weather. If it was me, I'd put a vent at the top of the back wall plus one at the top of the front wall, attach awning style adjustable flaps to cover them, and that's all. If you make the vents the width of the coop (8') and just 6 inches wide, that would give you a total of 8 square feet of ventilation, sufficient for 8 chickens which coincidentally is the number of chickens that would fit into this size coop figuring 4 square feet of floor space per chicken.

How about windows for light? If you make them operable, that would also give you additional roost level ventilation for summer.

Good thinking about the eaves all the way around. I only put eaves on the front and back of my winter coop when I built it and regretted it almost immediately. I'm reroofing right now to fix.

What Elmo said about getting in to clean- the first coop I got was 4 X 8 also and I thought I was going to be OK crawling into it from a 4' end. NOT!!!!!! Don't do it- make it as easy as you can to access all corners of it, seriously.

This design is so simple. It'll be easy to create doors. I wanted to make the long side open up fully anyway, but Mr. Cookies talked me out of it. Armed with the advice of experienced coopers, I can get my way.

Quote:
I am a huge fan of having one wall open up fully for any coop that isn't "walk in." It also helps to make sure there isn't a lip on the opening, so you can just shovel/sweep all the beddng out when you're doing a deep cleaning.

I have a removeable board at the front of my winter coop. The board keeps the bedding in (in my case, sand) but when I want to clean the coop out as I just did, I can simply take the board off and sweep away. Nice.