Crooked Toes on Just One Foot?

Hello, we have an Ameracauna chicken about 8 weeks old that has one normal foot and one foot with the toes VERY curled and crooked. They sit flat but are curled to the left. Have read archives, assume as it is just one foot it is not nutritional? Would the taping help at this late stage? Did not notice before as I am not the "chicken person" but had to do the chores this morning and noticed it. We're not breeding, just backyard egg layers/pets. The other 7 youngsters with this one are all fine. Thanks! Asnows.

I have the same thing going on. Same type of bird. It is like they want to lie down and can't stand on the one leg. I bought these through a private person. So they weren't vaccinated. So I am wondering if that could be the problem. They are on medicated food. I lost one already to this problem. I did add vitamin k to the water, have no clue if that will help or not.

Quote:
I have one like that, a roo I hatched (we call him Gump). It was a humidity problem during incubation/hatch. Nothing genetic with our boy, he is the ony one (out of so very very many

) that had this problem.

I kept him because I figured no one would want a funny foot rooster - he is sweet and he has a hatching buddy (pullet, Fluffy) that he runs around with everywhere (they are inseperable).

He gets around fine, scratches for bugs, etc... the foot thing doesn't seem to affect him at all (and it is just one foot on him, also).

I'll try to get a pic later and post it for ya.

eta - Fluffy and Gump are now 6 months old and Fluffy has started to lay - he adapted to the foot naturally, since it was from hatch and not a later injury.

I have a Brabanter that came straight toed and then the toes on one foot started to really curl on the horizontal plane. She is 14 weeks now and it does not seem to really bother her. She scratches with it, etc. I always wondered what caused that. I thought maybe I raised them on too hard a surface.
Last edited: Jun 11, 2009

Ok, I TRIED to get a pic of Fluffy and Gump

but they never hold still long enough to get a good pic....

no pic of his toes, but here he is running away (thought the camera might eat em, I guess) and then hiding in the woods.

Those toes do not slow him down at all 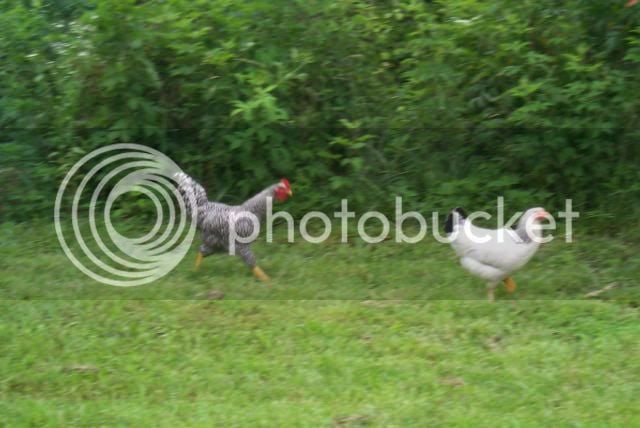 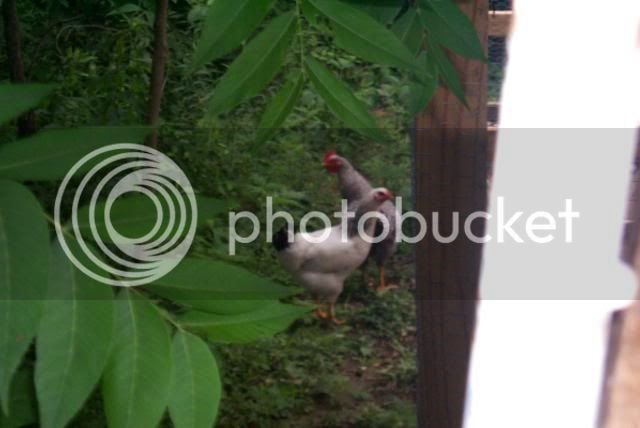 it is his left foot that is messed up - inside toe is normal, middle and outer toe is curled to the left - flat, but curled sideways.

Gump is the Barred Rock boy - Fluffy is the Brahma/Delaware mix pullet (pretty aren't they?)

Thanks for all the info! Will keep an eye on her, now that she is wounded she is a shoe-in to be the favorite! Asnows

How long has it been that way? If you can still manipulate the toes into a straight position, then splinting could help. Just be sure to recheck in 3-4 days because chicks grow fast and you don't want the splint to cut off circulation (then he'd have no toes possibly). You may need to resplint twice. If you can't straighten the toes and 'ankle' into a good position or if it curves even with the splint on then it may be a persistent problem. Keep on non slip surface and not on cage bottom if still in cage. Go to DCT's http://www.peafowl.org/ARTICLES/1/ site for doing the chick shoe or do a search on here. You can do it with either cardboard, credit card cut up or pipe cleaner depending on the malformation and what would work best. good luck.

Rooster in weird positions- is he in pain?