These should be Welsummer chicks--17 days old. 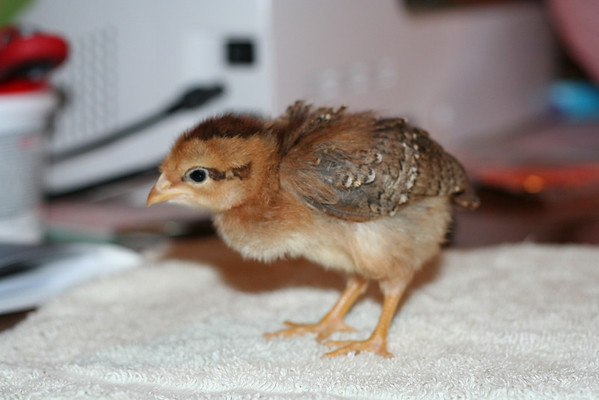 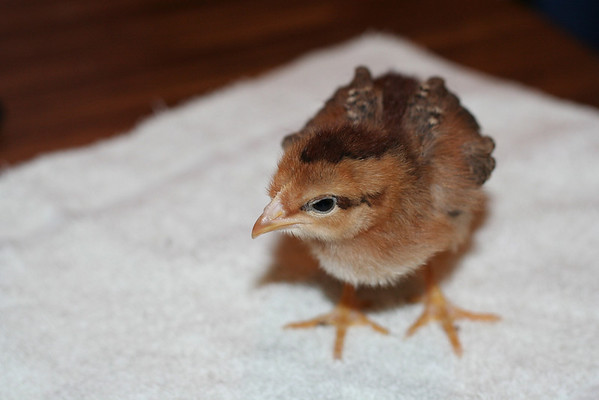 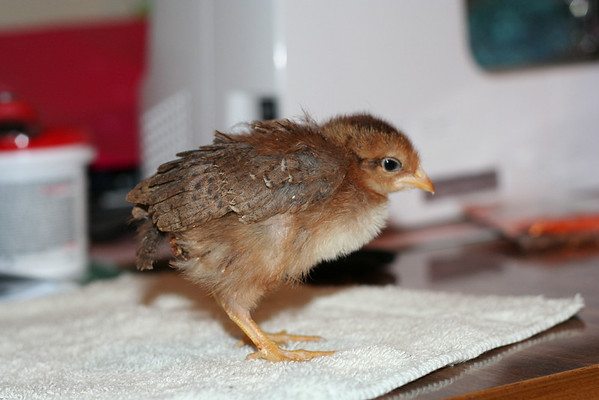 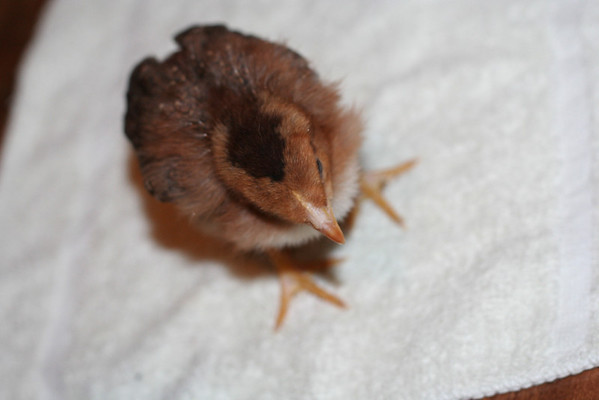 (Right after I took these I realized the poor thing was seriously pasted up! It poo'ed as soon as I fixed the problem, poor chick.)


3. The smallest and lightest colored of the Welsummers... 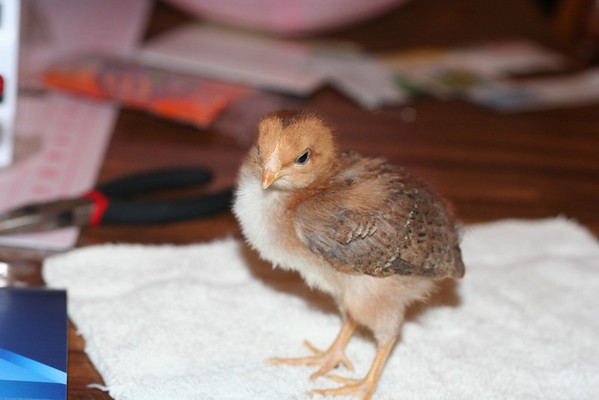 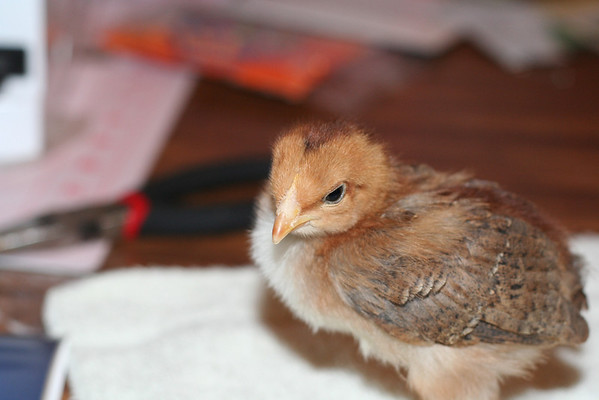 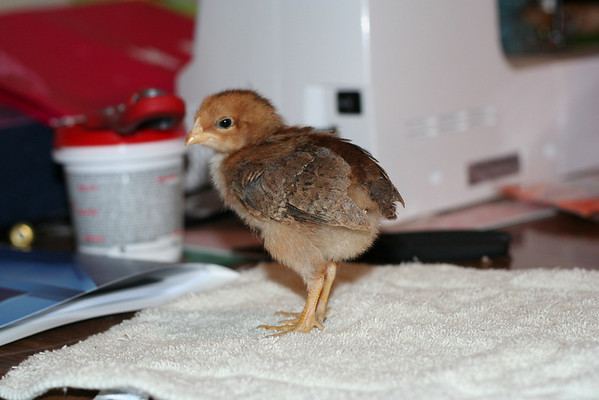 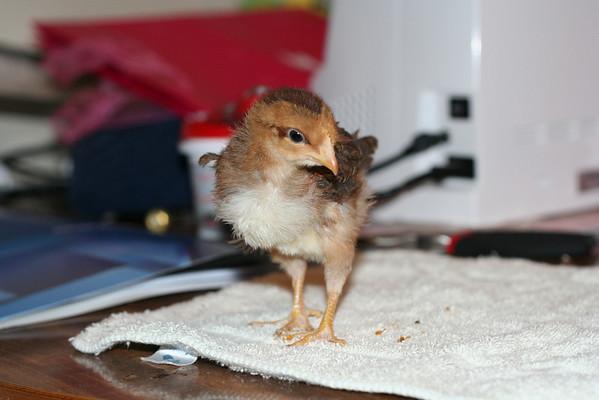 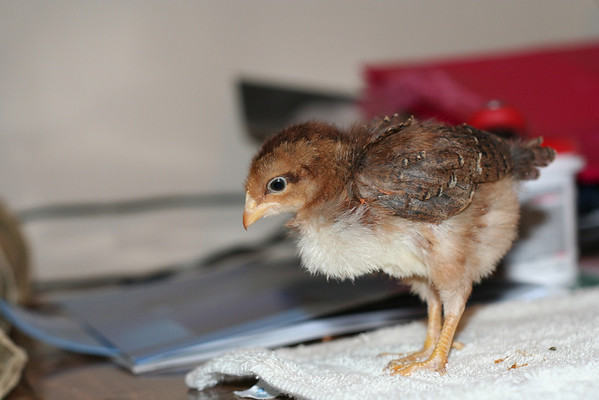 The last two birds side by side: 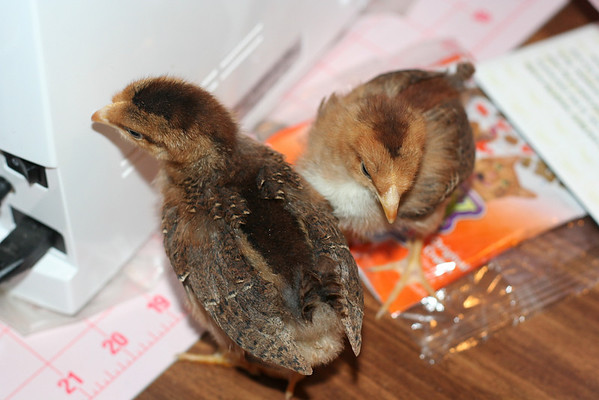 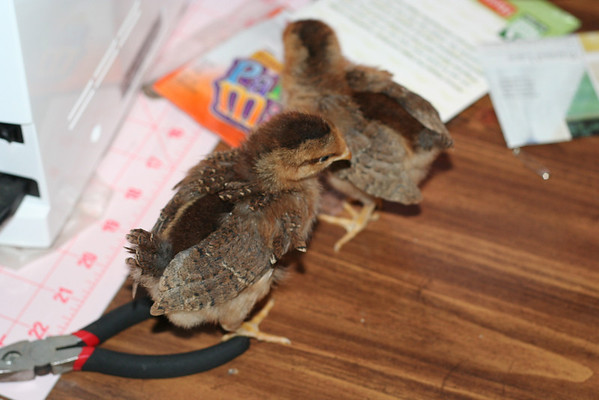 I'm not sure of their age, my toddler was going crazy and I can't remember what the farmer said. They are definitely smaller than the Welsummer chicks. 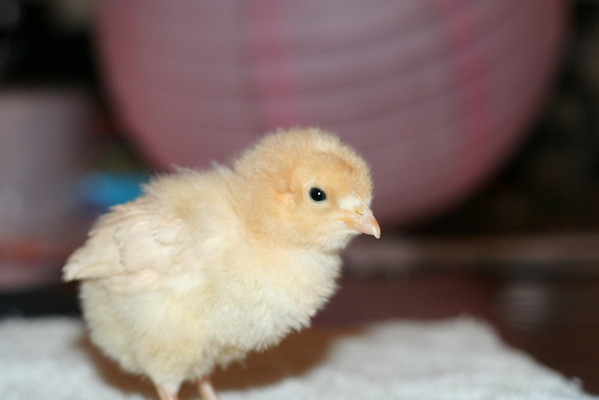 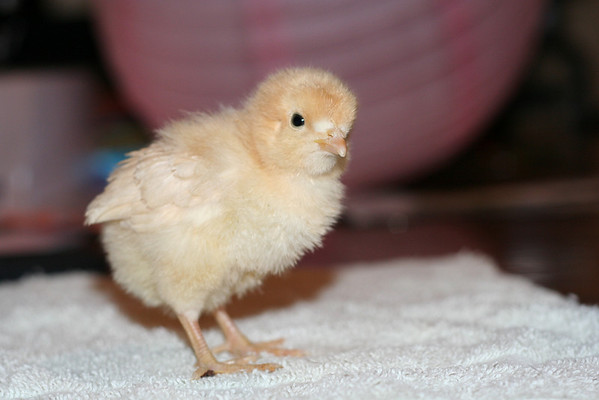 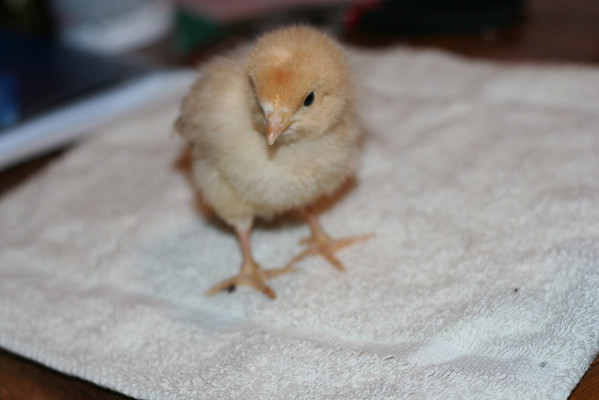 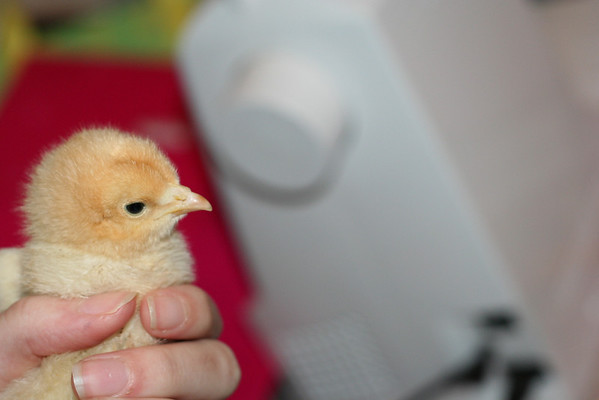 6. This one is the smallest. It was sick the first day home but perked up after I gave it some sugar water. 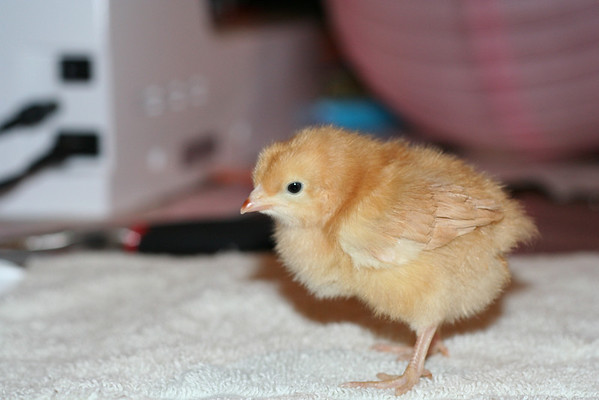 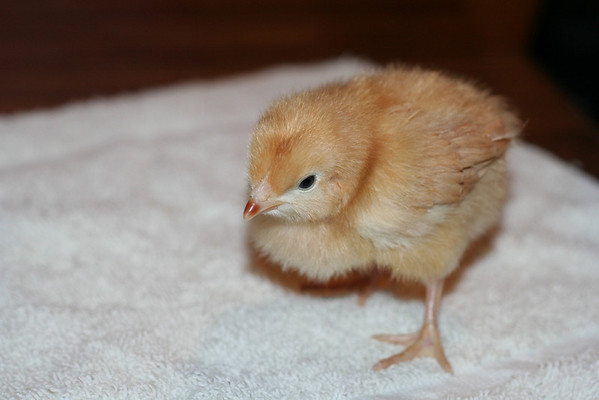 The two yellow chicks together: 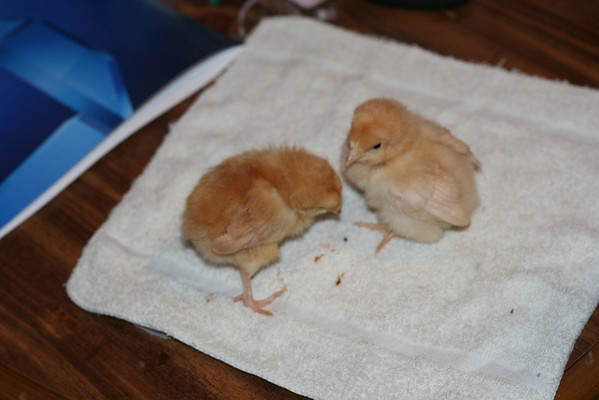 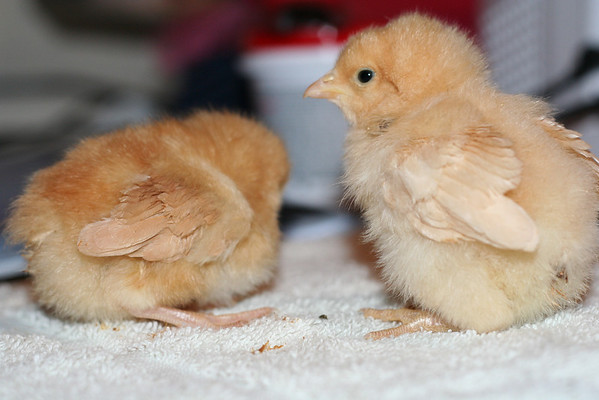 And lastly, everyone together...this is just what I carried them in for photos with, not their brooder! 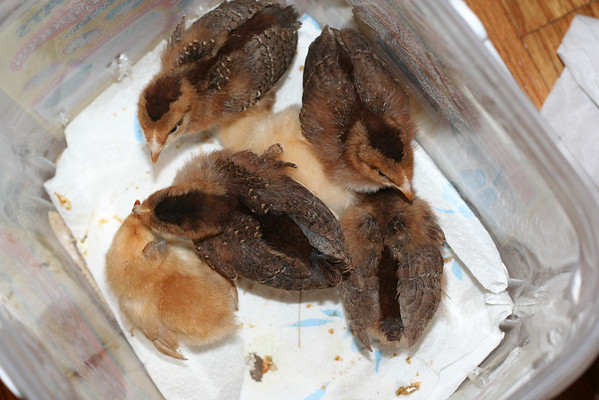 Does their poop in there look slightly bloody to you all? I don't think their feed is medicated, TSC only had one kind so there was nothing to choose from. I'm a little worried.

Can you tell if any are roosters? I live in a suburb, so roosters have to find a new family once they start to crow!
Last edited: Oct 2, 2008

keep an eye on #4.. the biggest and boldest one. My boldest chick is now a Big ole RIR Rooster! He was supposed to be a she.

They are really cute. I think the yellow ones are buff orpingtons. I cant tell about the blood in the poo, but in that last pic the one on the bottom stands kinda like it may have cocci so i would keep an eye on it.(and the first pic on #2 bird)~no idea what sex any of them are
Last edited: Sep 24, 2008

I think they are all chickens.

Those yellow ones look JUST like my BO chicks, except for the red mark on their beak - my RIR chicks have that - they COULD be a cross.

Your biggest and boldest chick definitely has that rooster stance going.
Given that they came from a farm, I would try to use medicated feed if at all possible.
Other than the big bold one, it's really too early to tell on sex. They will start to show their secondary sex characteristics around 4 to 6 weeks old.
Take a look at this in the meantime and soon your little roos will start to stick out:
according to UC Davis Veterinary Care Program.
2. Physical Characteristics (4-6 weeks of age)
a. Comb  The cockerels comb is medium size and pinkish, the pullets is small and yellowish.
b. Legs  The cockerels legs are sturdy and long, the pullets are finer and shorter.
c. Tail  The cockerels tail is stumpy and curved, the pullets is longer and straight.
d. Back  The cockerel has a thin line of stub feathers down the center of his back, the pullet has more advanced feathering along the center of her back.
e. Side of neck, flank and crop  The feathering in the cockerel in these areas is poorly advanced, the pullets feathering in these areas is well advanced.
f. Wing bows  In the cockerel the wing bows are bare, in pullets the wing bows are covered with small feathers.

Thanks Gritsar! I just saw your post. I'm going to look closer at them with those specs tomorrow.

They are so hard to take pictures of because they run away, or my toddler tries to grab them and hug them.

I got my husband to hold them for pictures tonight, but you can only see their combs and not their bodies and legs. So you can't really see much, but I'll post them anyway just for the heck of it.

The first one I snapped a full body shot, before I realized it was trying to run far away from me... 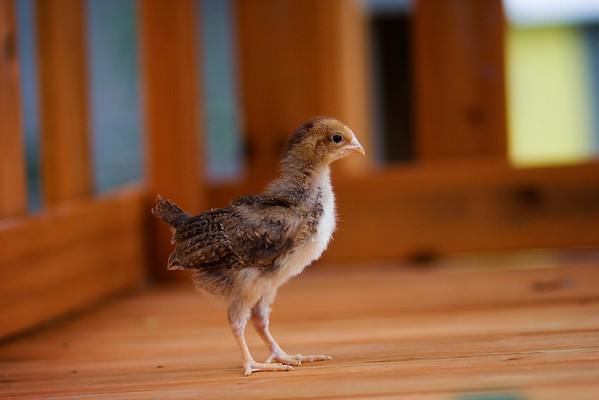 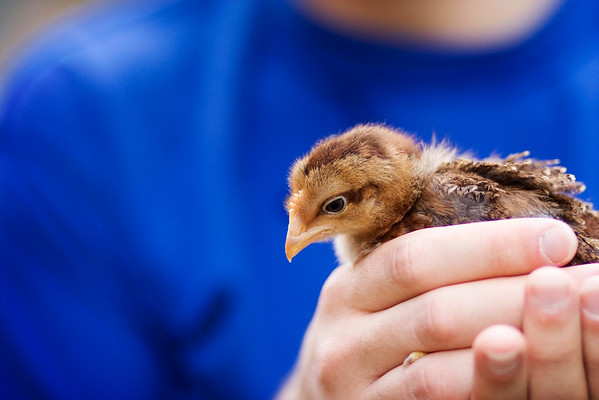 #3 Can't really tell...I'm anxiously waiting for something to develop on all of the chicks! 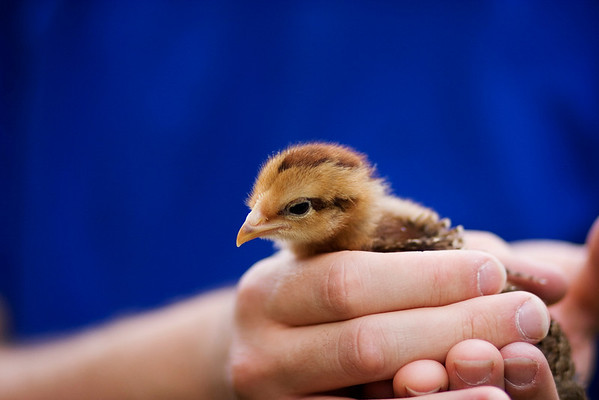 #4 you can't really see the comb in this picture either, but you can see how much they are feathering out! 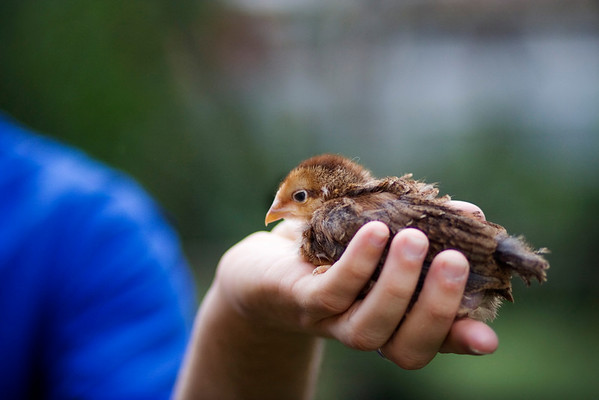 #5 the little yellow ones are so sweet, but they are a couple weeks younger so you also can't tell much. They're starting to get a few actual wing feathers now! 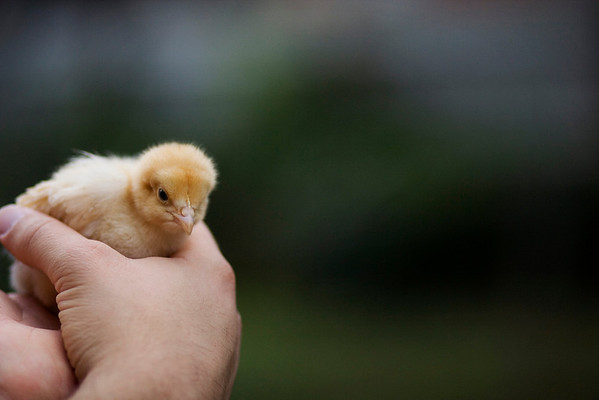 #6 this is the one I think is the buff orp/RIR mix because of the dark spot on the beak. 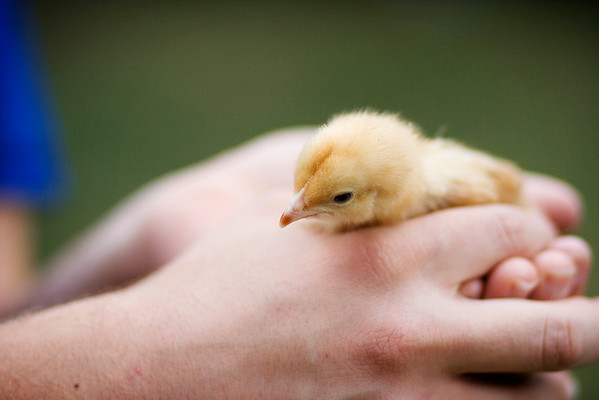 Remember...this is just my guess!

I've been thinking the first two are roosters too. They are both bigger than the other two Welsummers.

Do I have a Brahma or a cochin?