Dash graced me with his disappearance yesterday. He recently attacked my younger 7 year old brother and chased him around the yard. Before that he only took out his aggression on my father and I. So the neighbor got him. I just feel so sick about the whole thing. But you have to understand first.

Last spring my Brahma hen went broody. I had been convincing my parents months before to let me hatch a small clutch of eggs. Our flock ratio was 3 roos to 9 hens, as I hated, and still do, to give anything up, especially a pet. Even a rooster. My parents, unwillingly agreed, saying that if any of them are roosters that turn bad, they'd be outta here. Excited, I agreed, and carried on to hatch my first chicks.

Out of my Polish's 4 eggs, all from different days, 2 hatched. Dash and Tosca where raised in the brooder alone. Each clung to each other day by day as I worked hard to stimulate them. I handled them as often as possible and took them outside for a few moments each day so they could follow. Dash was the more eager of the two. He'd chirp readily and scramble to catch up if fallen behind. His attitude was hysterical. I thought that he was special. He had been born first, 3 days before his sister.

That summer, the two were integrated into my flock and I went away to sleep-a-way camp. I was afraid to leave my two youngsters. But I received letters each day from my family saying how they were fine. Those letters made the days all the more bareable. After 6 weeks, I came home to one pullet, and one cockerel.

I was shocked at how Dash had changed in appearance. Everything about him was changed. I went into the run to get a closer look, and what do you know, he came and ran to me. He remembered that I was his mom. I held him and cuddled and never wanted to let go. But it wasn't until weeks later that I knew why.

That August, I was sitting out with my flock when Dash jumped up behind me and spurred my back. There was no blood, but I was still unhappy. I didn't know why I was such a threat, he was only a few months old. I spent day after day with him in that brooder. But most of all, I was worried for him.

The behavior only got worse. Dash became territorial over his hens. Whenever I came near he'd tense up and go at my sneakers. I had no choice but to kick him away. I was careful when I did so, making sure I didn't hurt him. I couldn't hurt what I created. And in a way, I did still love him.

We were out in the yard a few days ago and he got to my brother. By then, I knew it was all over. I couldn't protect him anymore and I had failed him. Dash was going to a neighbor who wouldn't make him last long. No one would want a mean rooster. Only a mean meal. My father gave me a week to say goodbye. That week went by fast.

He was picked up when I was in school yesterday. The flock was quiet. His sister stuck to me like she was glued there. She usually followed her brother around and had no one else now. The roosters were very quiet and Dash's hens were so confused.

Is it so wrong to feel this way? Is it silly to love this devil, that hurt your family and yourself? Even if he was the show of all of your hard work and you raised him and loved him and promised yourself to support him? I'm giving him a week before I convince myself that he is dead.

I've showed this picture around BYC for a few weeks now. This is my little guy. There are just some things I'll never be able to let go. 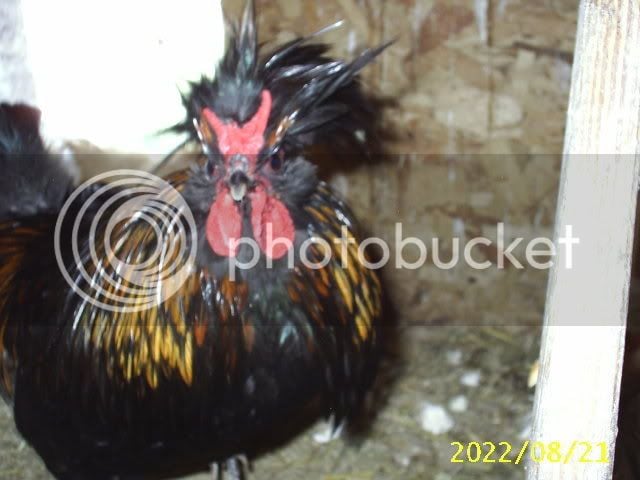 Thank you for reading.

Your story was horrible, but beautiful, just the same. I am so sorry for you. Dangit, you actually made me cry!!!

I fear that same situation, as we aren't allowed to have roos in town and I foolishly got 4 chicks labeled 'straight run' from the feed store- 2 'mixed bantams' and 2 polish. One polish had to be euthanized Monday, due to a horrible defect, and the other 3 could go any old which way- but one of the bantams has a suspiciously large comb at just a few weeks.

I don't even know how I could re-home them, since I don't know anyone with chickens NOT in town. I empathize with you 100%, and hope somehow you'll find peace in this horrible situation.