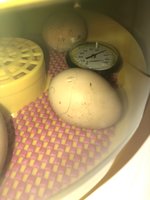 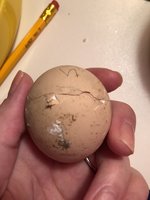 Hi all! We are super excited tonight, watching one of our set pipping himself out of his shell. Just the early stages— he popped last night the first time and now he’s got enough of the shell out that we can see his little face when he pips

There was another egg that had an external pip right in the air cell line, (thankful!),

and he must have pulled sometime between 1am and 6am. No further progress from him other than the one pip.

The others (5/7) haven’t shown any hatching signs yet.

But 1/7: I dropped, day 18, cracks along the shell but no membrane damage. I worry It was dropped, maybe not viable.

And another 1/7 we thought smelled rank and looked a little too empty, almost tossed on day 22, saved because we were afraid of being wrong.

But because it’s so late— day 24— is there a point when we should give up hope on the rest?

A little backstory— we had humidity between 75-90% for the first 12/13 days by accident. We didn’t have a gauge. Actually, It probably fluctuated a lot more than just that.

Also, they are shipped eggs so the air cells were saddled in the majority.

Hoping this just delayed hatch timeframes but I would like the opinion of the more experienced!

It's normal for chicks to externally pip and sit for around 24 hours (on average) as they absorb the remaining yolk and blood that has been running through the veins in the membrane. Sounds like the eggs coped with a higher humidity if some have externally pipped. If eggs don't lose enough moisture the chick will pip into the air cell and run out of oxygen before being able to make an external pip.

If none of the other eggs have pipped by the time your active ones have hatched I would candle to see what's going on. Good eggs will be full and dark under the air cell. Chicks that have died sink towards the narrow end of the egg and there will be a watery gap between the air cell and dead embryo. If the chick has internally pipped you'll see its shadow in the air cell. You should see it moving. If it's still then it has unfortunately died.

If that egg is smelly I would remove it. Losing one is much better than having it exploding in the incubator and contaminating the other eggs, potentially killing them due to the bad bacteria they will get showered with.

Good luck with your hatch and ask away if there's anything else you need to know.

S
Help, please! Day 29, duckling internally pipped and moving but no external pip! What to do?

Silkie day 23 internal pip nothing else