Dog licking too much

Thanks for all the ideas of what to check and try. He hasn't had a bath in several months. We don't bathe our dogs unless they are exceedingly dirty so probably only 3 or 4 times a year. I will try giving him a bath to see if it makes a difference. We brush their teeth regularly so I don't think there is anything wrong there that I haven't seen. He doesn't seem to be itchy so I don't think it's allergies but it is a possibility I guess. Though I do use him as a mushing dog, he isn't a northern breed. He's a plain old mutt. We've heard guesses on his lineage from pit and boxer to mastiff and even shar pei. I have noticed some hair in his poop recently so that probably is the reason for the hacking. I wonder if it's worth paying for a vet visit...


Here are my boys getting ready to go run (the dog in question is the tan one in the back): 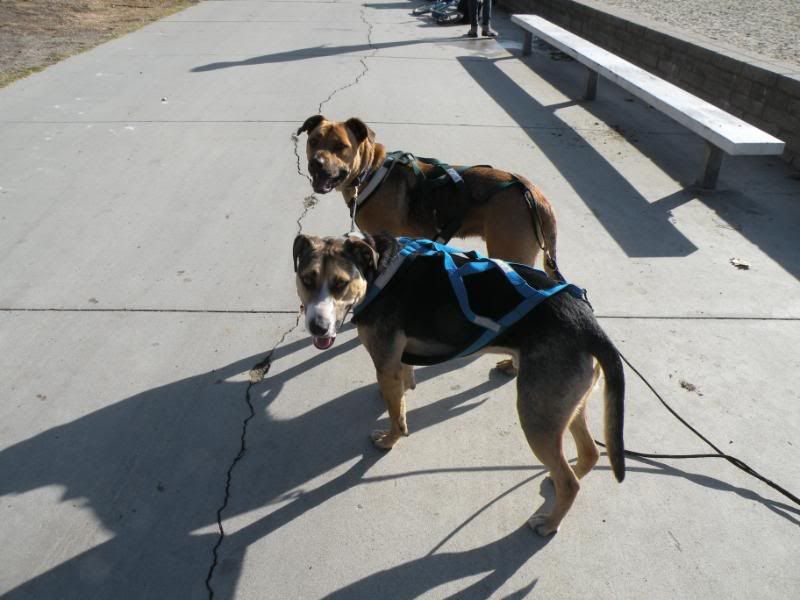 it could just be hot spots, sometimes dogs get sore and/or itchy spots and lick them to help it although if it is all over not just a few spots/sporadic, there are no sores, and he does it all the time not just occasionally then that probably isnt it so maybe he just likes it or is just calming himself down or something, not too sure, although i suppose you could take him to the vet if your really that concerned about it and the hacking and hair in the stool probably isnt good for him either, but do whatever you want/feels best to you, good luck!

ETA: oh and by the way nice dogs, theyre cute!

My other two will obsessively lick each other, but that is more of a social/calming thing. As long as he isn't doing damage, it should be OK (we do have to deal with wet spots from ours ewwwww)
By the way, such handsome dogs (and I see pit in his head/face but I wount tell anyone

)
I had alwas wanted to do that with my dogs, they love to pull me on rollerblades (one is learning to be a dockdog, but his social issues may not allow it)
good luck

Hi! I've done a lot of dog rescue and so I've lived with lots of different dogs and seen variations in how much they do certain behaviors such as licking, chewing, drinking water even and other habits. I've known several dogs who have licked themselves (specifically the front legs) obscessively due to over-crating and the scars became permanent and ugly. The dog can cause what is called a lick granuloma which can grow really large and it can be really difficult to get them to stop it even when they have licked themselves bloody, so you do want to keep an eye on this. It could just be boredom and you might try chewies or toys. The over-crated dogs were just so bored there was nothing else to do. I've also known some little spitz dogs (poms) that licked their legs until everything turned brown and slimy continually, like a nervous habit. They all needed to be treated medically for this!

Since at this point you are not sure if he is doing this too much or not, he probably just is being overly clean. I agree with the suggestions to clean him yourself. If he continues to lick after he is clean and has chewies to entertain himself, at that point, I'd start working on a command such as "quit" or "enough"......if he won't stop licking. Let him do a normal amount of licking and cleaning when he comes in from outside or is wet and then tell him your command word to cool it now. I would just interfere with the licking if he did not understand the command, such as cover the leg with your hand, or pushing his face away. He sounds smart, so I think he will get the point because the dogs I had did fine learning what "enough!" in an exasperated tone from me meant.

If at any point you get concerned, a really inexpensive thing to try would be to be an e-collar at the feed store and have him wear it for a few days to try and break the habit and heal whatever it making him itchy/licky. With the one dog, I would just pick up the e-collar to put it on and he would stop licking. This dog had huge lick granulomas because he suffered from food and probably flea allergies. If your dog has skin issues and ear infections too you might think about food as being a cause. I'd keep track of the protein you are feeding your dog and not skip around so that you can figure out if your dog has allergies. It takes a whole month or more before the effects of a new food kicks in, so don't change foods every week. Try using a food with an unusual protein base such as duck (not chicken, lamb or beef especially) and stick with it a month and see if that helps. I'd also avoid any dog foods with corn as a main ingredient. I'd also smell his ears and make sure they do not smell yeasty. And finally, if the skin on this dog gets too wet with saliva from too much licking it can create a hot spot. So if at all possible, keep the fur dry.
Hope my perspective helps, but I've dealt with this kind of thing a lot.
F

What are you feeding the dogs? This could also be a food allergy, and a lot of times wheat is the culprit.

Also look into joint pain...sometimes dogs would lick alot to relieve the pain as it happened to one of our collies, she had arthritis in her fetlock bone and we didnt know that. So we gave her some pain relievers supplied by the vet and she did fine.

They are both on Iams sensetive stomach food right now. I know it's not a fantastic food but Skippy, the one who licks, has a very sensitive stomach and it's the only food we have been able to find that he can tolerate. We thought we had found a better quality food that he could handle (natural balance limited ingredient diet), and we were slowly switching over to that food. As soon as he was on that food only, he got horrible diarrhea so we switched him back. That happened with a few different foods so we decided to keep him on the Iams even though it's not fantastic. I've never thought about that being connected with the licking at all though.

I have started telling him to stop when he is licking too much and he listens pretty well. Hopefully making him stop every time he gets going will break the habit.

I have a mixed breed dog (I think shep. & cattle dog) that licks all the time. She's also on meds for a sensitive stomach. She's actually allergic to her own stomach lining. She will like a hole in her leg or foot! I think it's now become a behavior problem. When I hear her licking I just say "no lick" and she stops. When I'm right there she will start licking the dog bed....which I allow her to do. During the spring and fall when allergies are bothering everyone here I give her some benedryl. This does help. The vet said that nothing can be done for her stomach problems other than what were already doing in addition to a good dog food without a lot of fillers. I have her on the Chicken Soup for the Dog Lovers. I had her on Hills z/d for a long time but it's not enough nutritionally to sustain them over their lifetime. I just searched for a food that was primarily chicken. You can check out http://www.dogfoodanalysis.com to see how the different brands stack up against one another.

Quote:
If he has a very sensitive stomach and is licking a lot he may well have food allergies. My dog was the same way. He now takes Famotidine (generic Pepcid) before every meal and he is fed a limited ingredient diet. We feed California Naturals Lamb and Rice, no more allergies and no more licking.

My dog licks everything, any pointers?
2