My 4 Khaki Campbell duckings are 5 weeks old. Today, one of them had severe trembling in his legs. At first it looked like he was shivering but then it appeared he was having trouble walking and his legs were shaking. Is my duck sick? His poops are normal, he is eating well and appears to have no other worrying symptoms. Has anyone else experienced this? Thanks.

Yes, this is not uncommon.

It could be a nutritional problem, or possibly something else. But most of the time, it seems to me, it is a lack of niacin. Ducklings do not all respond the same to diet. Some seem to need more niacin.

What are you feeding them?

Can you tell us more about their brooder setup, temperatures, watering, bath time, how much they are handled and by whom?

Welcome to the Duck Forum!

I am not trying to be mysterious. I am asking questions as I think about possible causes, such as too hot, too cold, nervous, beginnings of an infection, injury.
Last edited: Sep 27, 2013
M

Thanks for replying. They currently eat starter duck feed with additional veggies as treats - peas, sweetcorn & carrots, they LOVE peas and go mad for them. They currently live indoors with an ECOGLOW brooder in a pen with puppy pads and straw. Constant access to food & water. We bath them 1/2 times a day and have a pool in the back that they use every couple of days, they also have a good rummage around in the garden. The others are fine, they all get along and this duckie seems happy.

We are starting them on adult feed pellets this week. The thing is, if you google this stuff, you get different answers! I read somewhere that Tuna will give them protein that they need, then read Tuna is very bad for them! Here is a video of his shakiness.

Also how do you provide a duck with Niacin? Sorry I don't know much as I am new to this! Is it in a particular food or do I buy it in a liquid form somewhere? (I am UK based). 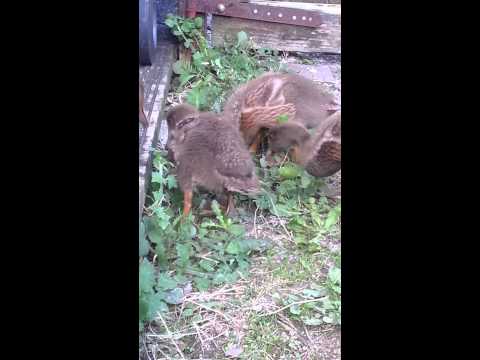 Niacin is fairly easy to find, here. It is a dietary supplement. It supports neurological development. I think it would do no harm to add 100 mg per gallon of water to their drinking water for a month or so. If it is a niacin (B3) deficiency, I would expect to see improvement within a week to ten days.

A trick with finding niacin that I have read on the forum, is that some places only carry no-flush, or timed-release niacin, which is not what they need. They need plain, simple niacin, preferably capsules that can be opened and mixed into water. Some have no problem finding that. Others have to look around a bit, or end up crushing tablets.

Usually it's when the only starter feed available is chick feed that we see problems.

What was the temperature when the little was outdoors? Could he or she have been shivering a bit? Had they just had a swim? At five weeks, optimal temperatures for them would be (here I start counting on my fingers) 90F minus 5F(times 5 weeks) is 90 minus 25 is 65F is 18C. That is a ballpark, I read all kinds of hardy duckling stories. I just try to remember that not all ducklings are as hardy as the book says they are. I write from experience, here. Fünf and Sieben shivered and shook if it were lower than 40F their first autumn. More than half the flock stopped laying. I thought it wasy day-length that stopped the laying. Then I moved them all into a night shelter that was above 40F. Surprise, surprise, they all started laying again within four days.
M

He is definitely warm enough, it affects him indoors and outdoors! I will get some Niacin tomorrow and start adding and will update with the results in a week or so, thanks for the info

Niacin has worked! I now have 4 healthy happy duckies! It took about 10-14 days. Thanks for your help!

maccay2k said:
Niacin has worked! I now have 4 healthy happy duckies! It took about 10-14 days. Thanks for your help!
Click to expand...

My 4 Khaki Campbell duckings are 5 weeks old. Today, one of them had severe trembling in his legs. At first it looked like he was shivering but then it appeared he was having trouble walking and his legs were shaking. Is my duck sick? His poops are normal, he is eating well and appears to have no other worrying symptoms. Has anyone else experienced this? Thanks.
Click to expand...

I have 4- 20 day old ducklings. 2 runners and 2 Cayugas. One of the runners has a shaky leg. I’ve been feeding organic non GMO duck feed with 20% protein. I bought niacin and enlarged their run to get those legs moving and it’s slowly helping. Be careful of too much protein too fast cause that can cause issues too. They will be free range for the most part when they are old enough.

Anyone else seen this kind of feather color pattern? (Mixed Breed Duck)

P
Limping drake -- a few questions while I wait for the vet; leg heat?