I brought Wiley indoors 1 wk ago, noting that she had been fluffed out, hunched, tail down and isolating. Wouldn't eat or drink. Lowest on the pecking order of 6 Pullets.

She's been mostly in a dark area in a pet kennel covered with a sheet. She' s had crushed OsCal - vit D3 with Calcium - daily, with layer pellets, Oyster shells. A couple of warm Epsom Soaks, and yogurt a couple times too.

She is eating again, tail back up, wants out of the kennel, chatty and wants to socialize. Thin runny poo at first, now larger size, more frequent and passing normal looking poo, with some stinky content.

Her illlness appears past - except there is a lot of Egg-song like squawking, then only poo instead of eggs, morning and afternoon daily.

This was preceeded a few times - since they all started laying in October - with a few instances of double shell-less eggs on the poo board, and also there has been been large double-yolk brown egg a couple times i think were hers. We lost a 5 Mo. Eggbound RiR to internal laying a few weeks ago...so took more actions sooner with Wiley. idk if the shellless eggs were
Goldies or Wylies or if both laid soft shell/shelless egg combos. I think Wylie because Goldie laid almost daily in the same nest til she became eggbound, and laid internally. None looked like gukky thick lash eggs.

I broke some bones in my arm. Last Saturday, so i can't hold her to try massage or to see if i feel an egg. Can't trim fluff or get to Vent anymore - it looked healthy but dry last Friday. I cant take the Chickens to a Vet whenever something seems off. There are no other pets, and she love the 7 year old girl who quietly visits.

I don't know when to return her outside. I have not seen a herd pussy wad that resembles a lash egg, and nothing this week.
.aside from Egg Song. If she is likely to die, i'd like her to have better days outside, unless she gets chased or pecked a lot...and we are working to make a free-range area safer, as a Coyote, Racoon and Hawk are visitors to our city yard.
.but i fear that more light will increase ovulation. The others all lay almost daily, with no extra light...and she would not have laying box privacy at their favorite boxes.

I'm aware there may be an oviduct or ovary infection, hence the yogurt, an a soup with dried ginger, minced garlic, oregano and thyme powders has been offered as a natural support. She has resisted drinking water most days, so i add it to her food. I guess i just need some support, as some times she seems fine...but egg-bound probably means death. Should i push that issue by moving her back outside with the others - and hope for the best?

I’m sorry, but I’m a little confused. Is she currently egg bound? Has this been recurring?
Is a vet an option?
If she has an egg stuck in her, either take her to a vet or look up how to treat it.

TheOddOneOut said:
I’m sorry, but I’m a little confused. Is she currently egg bound? Has this been recurring?
Is a vet an option?
If she has an egg stuck in her, either take her to a vet or look up how to treat it.
Click to expand...

She showed every sign of being eggbound - and there have been shell-less double eggs several times. 2nd Pullet to have the issue - the first died with internal laying. I've looked up everything on the net i think. Can't do the massage part - and some warn against it...or big Vet bills. I guess looking for opinion if she should stay inside, where it is warm, dark and quiet - but boring - or if i should risk returning her to the flock now that some signs are improved. Poo pix are last couple days...almost normal....and she's eating more.

PDXJULES said:
She showed every sign of being eggbound - and there have been shell-less double eggs several times. 2nd Pullet to have the issue - the first died with internal laying. I've looked up everything on the net i think. Can't do the massage part - and some warn against it...or big Vet bills. I guess looking for opinion if she should stay inside, where it is warm, dark and quiet - but boring - or if i should risk returning her to the flock now that some signs are improved. Poo pix are last couple days...almost normal....and she's eating more.
Click to expand...

Ok. If you think she currently has an egg stuck in her, you can soak her in warm water. Also, massaging isn’t a good idea - it can break the egg inside of her.
The last one, of the berries - is that relevant? Did she eat those?

If you suspect she is eggbound, put her in a container of warm water up to her sides and gently massage her underside front to rear while she is soaking. Do this for about 30 minutes.
The warm water will expand her innards and massaging her front to rear will help her move the egg along. Then wear a disposable glove and put a little olive oil or vegetable oil just inside her vent. This will make it easier for her to lay the egg. Repeat as necessary with soaking and massaging. You can use a hair dryer to dry her off if you wish.

update - I broke a couple bones in my left arm Dec 5th - was unable to perform any sort of chicken massage or bath procedure after that. After she was able to do natural looking poos again without hollering like she was laying an egg, we returned Wiley to the henhouse, and stopped any supplemental light. Hoping the dark season will allow her body to keep maturing and possibly repair the oviduct damage i suspect she had. She's lowest in pecking order, but staying alive and interested in life. She shows interest in nest box activity, but stays clear of many of the areas the dominant birds frequent. As days lengthen, i hope she can lay, but if not, we'll watch to see if she might like a new nest and roosting area in the yard adjacent to their run. My partner is building a strong, albiet ugly pallet fence for a foraging space.

Curious if a non layer might still become a broody in Spring? I have an incubator, but may wait and watch for potential Chickie Mama's to emerge. For now, just glad we both survived 2020 - scarred but still kicking!!

If this happens again I would suggest bringing her to an avian vet.
Here is an article that has some helpful tips https://www.backyardchickens.com/articles/egg-binding-symptoms-treatment-and-prevention.66978/

Wiley survived the acute phase of being egg-bound, and began normal poos after a week in semi-darkness indoors. She had perked up and seemed desperate to get out to socialize. I still have a broken left paw, so i had one of the guys bring her back to the henhouse, after a week and a half indoors. She's the lowest in pecking order but seems healthy and happy and spends time with us when we are in the coop.
By January, I hoped her insides had healed enough to possibly be able to lay eggs again, but i was not optimistic, since while she was indoors in the dark, she had done a loud egg song most mornings just to pass pellet type material, or poo. I sang softly with her for reassurance.

Since outdoors she has started getting a very red comb, and showed some nest interest, then pale comb, with no sign of actually being in the nest. I have seen some pellet like stuff on the poo board, so i assumed he uterus had headed into a tube which could compact and cook, then pass an egg. Today i find on top of a perching site a gelatinous clear normal size egg-white surrounding a few small poos. Later when i could get a photo - it had been stepped, and albumen was cloudy, but a part yolk is also visible! 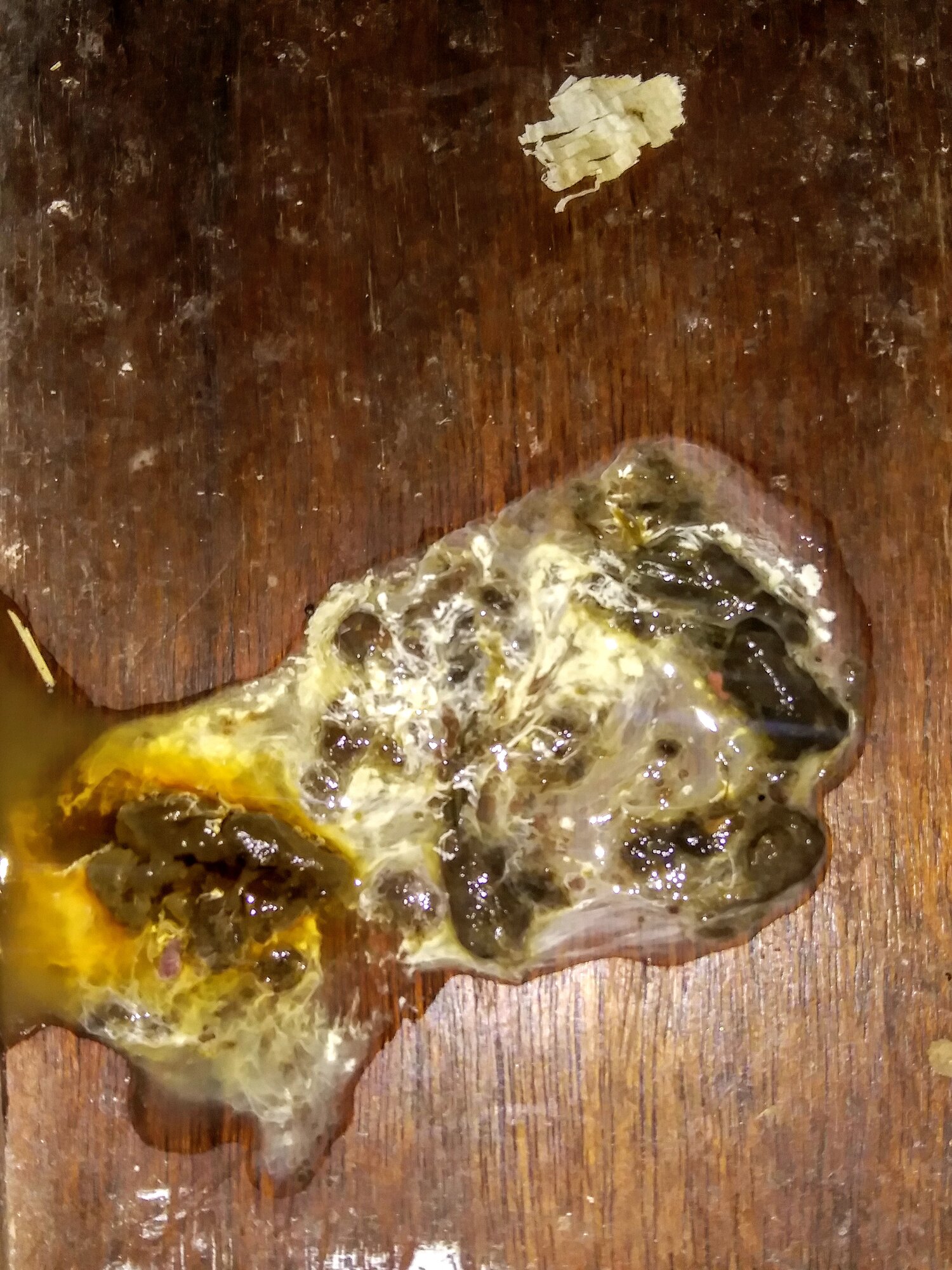 Earlier in the day the white part of the small poos were more distinct...so i think this combined mass came from both tubes in one effort...one after the other. I do not have hope that she can form a normal shell and pass it again, and i fear that would kill her. It looks like her body is creating a more gentle work-around. Should i wait longer, or try to switch her ti flock raiser or Chick Starter now?

Little update on Wiley...no more weird Poos and she's loving life, and my sweetest girl. Her Comb and Wattles are VERY RED lately, she's looking large and lovely as a BJG should; and she checks out nests when i am around, but i doubt very much she'll be able to complete the laying function again. Hoping tho that her body is absorbing her eggs, or that she can survive until er Molt, when active Stem Cells might heal her Uterus also? Long shot, but I'll let you know.

In a month she'll be introduced to our new Chicks, who are growing super fast! Hope she will be a gentle Auntie to the new flock, since our top Chicks might be jerks. We built 2 large. Adjacent Play- yards over the rainy season...and have a Chick Tractor in the grassy yard. I just need to identify and re-home the purebred Cockerels, in the Portland area.