(1) Are you new to chickens / when did you first get chickens?
I'm not new to chickens. Growing up, I've always had friends/family with chickens, even though I never had my own due to city ordinances. I first started taking care of chickens in February.

(2) How many chickens do you have right now? (3) What breeds do you have?
Our chicken program currently has 98 Golden Comet hens, 2 Ameraucana roosters, ~45 Buff Orpington pullets, and 2 Buff Orpington cockerels. The Golden Comets and 1 of the Ameraucanas are in mobile pasture shelters being run behind our beef herd. The other Ameraucana was with our layers in the pasture, but when we were culling our old layers last Friday he was set to be with them. However, when we went to get him out of the livestock trailer he got away and is now freely roaming wherever he wants. We were culling him even though he's only 7-8 months-old because he's been a bad rooster in the sense that he kept charging and circling everyone who went down to do chicken chores. Now he's been lingering around our brooder (funnily named the Taj McNugget) where the Buff Orpingtons are that we got in July. The brooder has a large interior and opens into a fenced in yard, so they're separated from Roy (the Ameraucana). We're going to pull one of the mobile shelters up soon to repair it and then the Buff Orpingtons will join the layers in the pasture.

(4) What are your favorite aspects of raising backyard chickens?
I just love chickens. They're so friendly and quite entertaining to watch when you're bored. I also really like the satisfaction of knowing that our laying flock can now supply community with all the eggs we need so we don't have to buy them.

(5) What are some of your other hobbies?
I spend a lot of time embroidering and sewing. I also enjoy playing video games quite a bit, things like Harvest Moon, Cave Story, Pokemon, other casual games.

(6) Tell us about your family, your other pets, your occupation, or anything else you'd like to share.
I live in an intentional community with a population capacity of around 70 members, however population is lower right now as we are around 60 members currently. We are an egalitarian, income sharing community. Some people (I cannot generalize everyone with this) here are striving towards as much self sufficiency as possible. Our ranch includes layer chickens, meat sheep, pigs, dairy cows, and beef cows. We also have 2 large gardens that produce a large amount of produce for community. Our main source of income is our Nut Butter business which is entirely owned and operated by the members of community. We produce and sell organic and non organic natural peanut butters, almond butter, raw and roasted cashew butter, and tahini. We also produce and sell Utopian Rope Sandals, which was the community's first business.
Edit: East Wind community has existed since 1974.

(7) Bonus: How did you find BYC, how long have you known about BYC, and what made you finally join our awesome community?
I was originally searching for an answer to an egg eating question when I first kind of took over our chicken program (its more like a heavily involved management team rather than one person being in charge). I ended up here and got a lot of helpful information.
Last edited: Nov 15, 2018

Great Bio there @fanny.eastwind great the concept of you group probably better for all if more did the same look forward to seeing you post's and Welcome to Backyard Chickens

I have a flock of 5 ducks. Not nearly as much as you! Hope to see you around the forums!

Welcome to BYC! Thank you for joining! 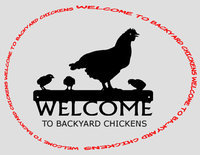 You have quite an operation going at your place!

Glad you joined.
It's good to hear that this community helped your community.

It's nice to have you here with us!

and Welcome to Backyard Chickens.

Thanks for joining our community!

Hope you enjoy it here as much as we all do!