Little Tux’s bottom-end swelling is going down considerably! I make sure to water him with a syringe to ensure he is getting enough fluids and his stool is softening. This is his third day.

He still worries at it, and late last night I noticed (as the swelling had gone down) that there is a white tube/ skin coloured tube, that has three or four soft downy feathers barely protruding from it.

It isn’t red, so it doesn’t seem infected. But he is still constantly pecking at himself and seems unable to get a good sleep because of it. He doesn’t run around with energy anymore- just alternates between pecking and trying to sleep.

- Could this be a feather cyst?
- Could it be irritated from having pasty-butt? It is above the vent a ways.
- Is it possible the reason he is so irritated and itching is because he has mites? A couple other chicks scratch but not incessantly- seems normal.
- Would it be a good idea to treat the chicks for mites, when they are so young? I have a rabbit in the house and it is possible she has them and they transferred in to the brooder. Murphy is a free-roaming house bunny! 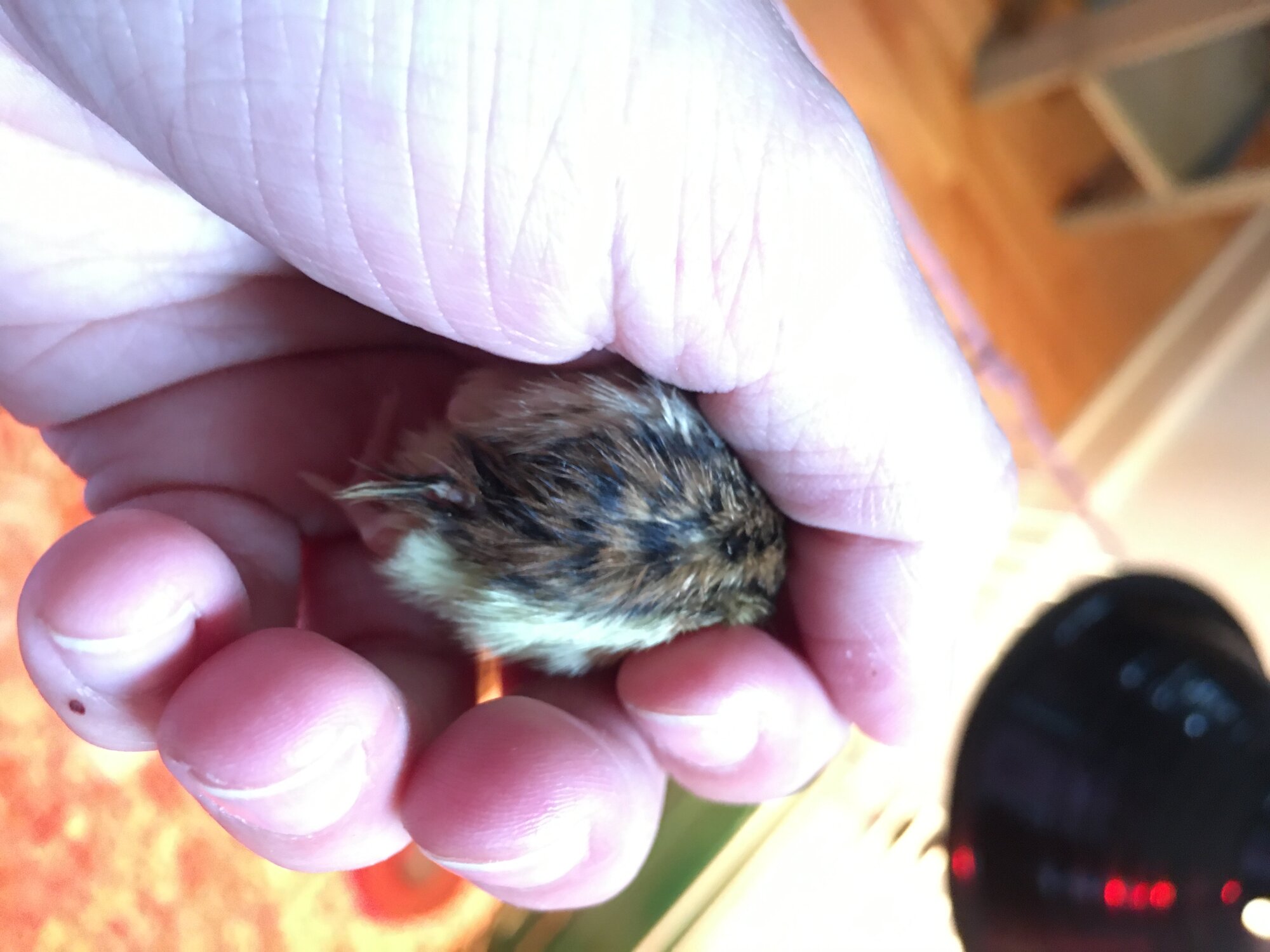 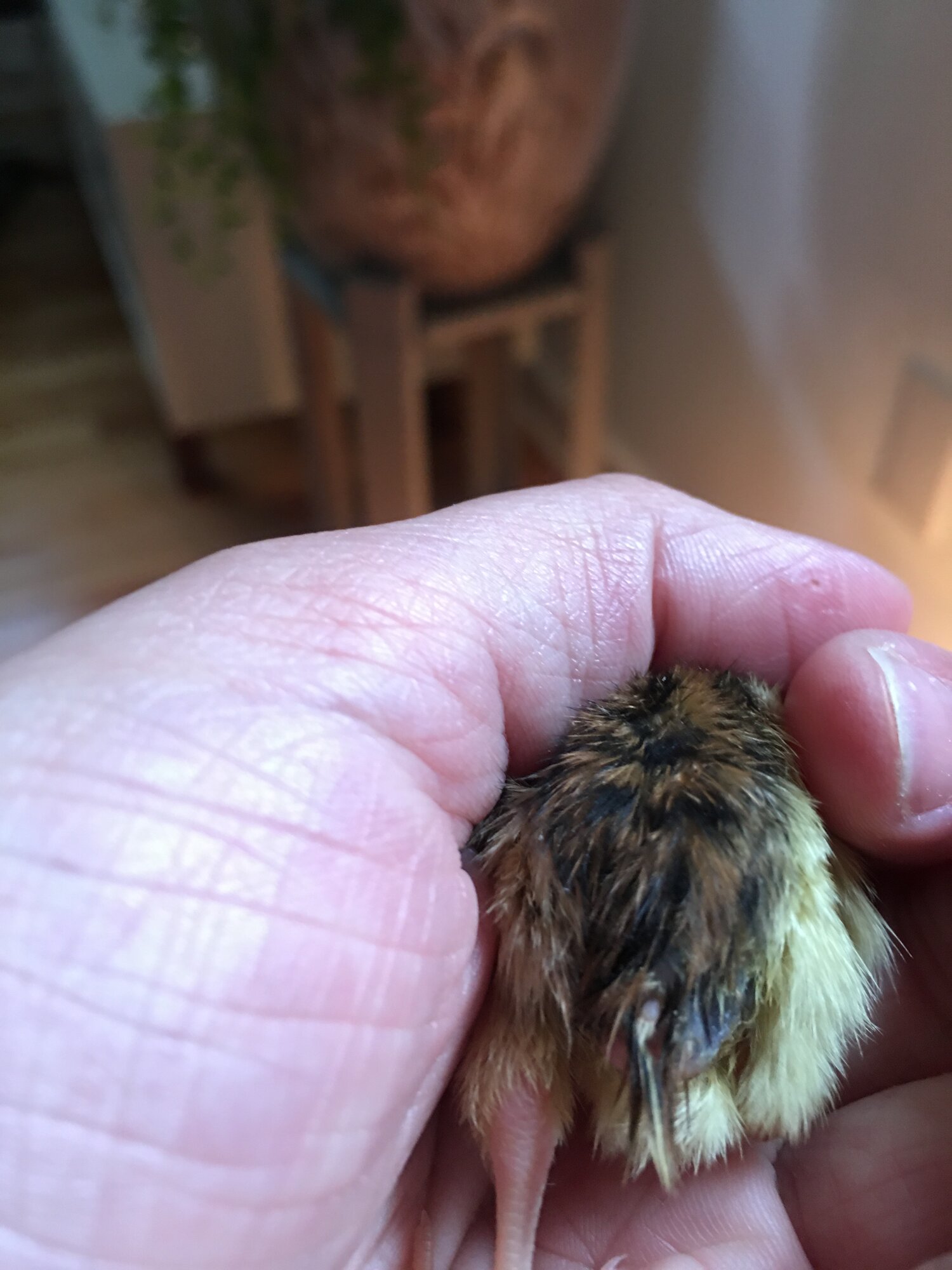 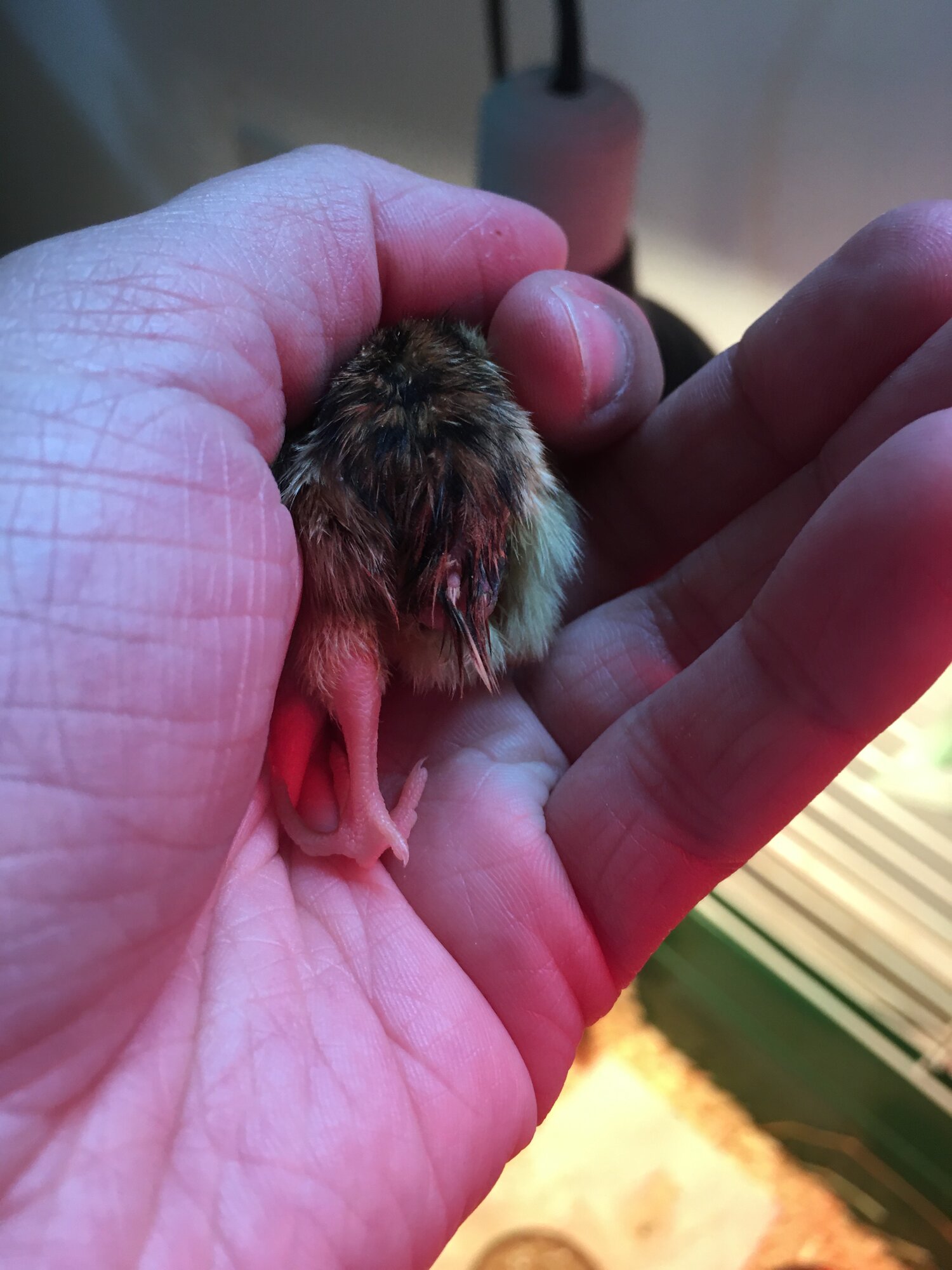 it might just be dried and wet feathers. @Nabiki ? what do you think?

I don't know about this one. Have you tried tugging on the feathers a bit? I'd be tempted to see if they come out easily.

I really can't tell much by the pics. Could be it's just irritated from the pasty butt?

Nabiki said:
I don't know about this one. Have you tried tugging on the feathers a bit? I'd be tempted to see if they come out easily.

I suspect the pasty butt was due to whatever this is... at first, it was weepy, had a clear liquid. I thought it was left-over membrane and cleaned the chick thoroughly. His hind quarters and underwing fluffed out nicely after the cleaning, but his tail above the vent continues to harden. I don’t want to keep exposing him to wet, so I have just been putting Vaseline on his vent and that has enabled him to keep on pooping, despite his bottom being re-sealed with the clear dry... liquid. When I noticed the clump of feathers at first, I thought it was a mite because it was a tiny white dot. That’s when I tried to remove it the first time with tweezers after softening it with warm water and Vaseline (ouch!). Now it is elongating and feathers have emerged at the very tip. I’d say it is about 2mm long. I tried to tug on it, the chick chirped very loudly. I think I will leave it for the day (keep an eye on it) and see what tomorrow brings. He is just very annoyed but he is eating and drinking and pooping. So as long as I can avoid infection I think he will be okay.

Can you recommend something for his skin should I be able to remove the clump of feathers and it is an open wound? I don’t want to attempt it without having something on hand.

That's its oil gland. Leave it alone, hope it hasn't been damaged!

I hope I didn’t damage it, I am very gentle and stop and cleaning of that area if he chirps. He seems to enjoy the attention and is happier after for a while, until he starts back at his rear end again. I will look more into it now that I know what it is! Thank you! Do you think he is irritated with it because of his swollen bum? Maybe it swelled up too as a result. I have just been applying Vaseline to his bottom as usual. Is it your advice that I should stop? @007Sean

Thank you for understanding. I am going through a steep learning curve and would have never guessed that an oil gland would have feathers coming out of it, but now after a quick google search I see that is true!

yay! I am so happy to have this community, and I look forward to the day where I can contribute

What is wrong with my Button Quail? PLEASE HELP!!
2

Yesterday at 9:42 AM
Nabiki

Chicken back feathers wet/damp looking. smells bad, irritated and and bloody? anyone have any idea?