Today I found myself with 4 day old turkens chicks. I had actually ordered them with a friend and forgot about them until yesterday morning.

I decided to try and see if I could get my currently nesting hen to take them so they weren't in my brooder when my quail hatched.

A little back ground: My hen is a Cochin bantam that recently hatched out a clutch of 5 chicks over almost 3 days. She lost one early on and the remaining 4 are only a few days old. She's currently in her own area where she can see the other chickens but not interact with them while the chicks are super young. 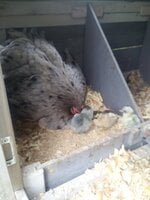 I've heard of broody hens being tricked into taking chicks by letting them sit on eggs for about a week, and figured I would try with one who already has chicks. I gave her one of the four at about 5 o'clock, and after a small peck she seemed to have no problem bringing him underneath with her own. 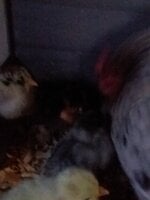 (the first foster is a little hard to see, the pink belongs to his neck in that back picture)

About 15 minutes ago, I took down a second. I was worried ahe might not take him since the second chick is pure yellow and all the ones she hatches as well as the first foster were either black, grey or brown and yellow, so he stood out more. She didn't even peck him, just standing to let him run over and huddle with the others. 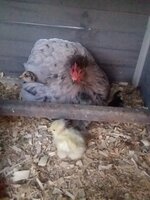 So far, 2 done, 2 to go. I will be getting up early tomorrow to make sure that they are alright before I try to add the third. I still have the brooder up and ready in case she decides to reject one or all of the fosters.

Congrats on getting the Naked Neck chick's! I think that she will accept the other 2 also.

My main concern now is just the amount. That would be 8 chicks, 4 or 5 of them standard sized under a bantam hen. I know they get big pretty fast and I don't want the bigger ones to unintentionally kick the smaller ones out from under the hen since it's still rather cool at night here

Alrighty, checked on them a couple hours ago this morning and everyone is doing good so I brought down a third. Everyone was eating and drinking this morning so she didn't seem to notice all of a sudden having a third foster. Will post a picture when I get back to my place. Hoping to add the last one as well then so everyone is good.

Alrighty, here's the picture of the third foster, a reddish chick withba darker back stripe: 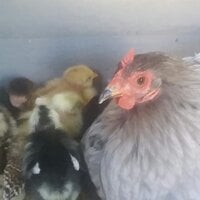 And then the last foster, a black and yellow chick. She's taken all of them successfully so far, although she seems rather puzzled about where these all suddenly came from. 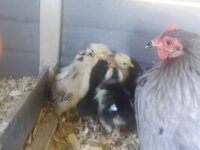 Lone chick - here are my options
2