Found a chick on its back under the heat lamp!!! How to prevent it?

I came dangerously close to losing a silkie chick the other day. If I had checked on them 15 minutes later than I did she would definitely be gone.

I went in to check on my bantam chicks in the brooder and found one of my silkies on its back, unable to get up, DIRECTLY under the heat lamp. I had a minor heart attack and thought it was dead, but then she started slowly moving her legs and I quickly flipped her over. I thought she was sick, but after flipping her over she immediately started panting very rapidly. I immediately took her out from under the light and into the cool air of the shop. After about 10 dazed seconds she was fine and started peeping for her buddies. I'm assuming they got into a chick pile and she was knocked onto her back in the worst possible part of the brooder.

How the heck do I prevent this from happening again? I actually lost a bantam cochin chick not long ago, and I'm wondering if it was the same way. It was the runt of the bunch, but it was on its back when I found it.

Sorry to hear about the Cochin chick, but glad to hear the Silkie is up and about. My first thought is how big is your brooder and how many chicks do you have it in? The brooder should be big enough so that they have room to get out from under the direct heat of the heat lamp. If the chicks are all piling under the heat lamp, then the overall temp in the brooder is too cold. How old are the chicks and what is the temperature in the brooder (at the height of the chicks?) Are the sides of the brooder solid, so there are no drafts? And make sure they all know where the water is and that they all can access it easily.

Can you post a pic of your brooder set-up?

The brooder is HUGE. Like...4 ft by nearly 3 ft and there are two lamps in there. One 75w red bulb on one end, and one 60w normal bulb on the other end. Not sure what the temp inside is, but there's a big temp gradient because it is in the shop which is outdoor temp, maybe a bit more. It's a wooden brooder with a wire mess front, and I drape a towel in front to hold in heat. When I check on them they are usually on the fringes of the hottest ring of the red lamp, or underneath it if they'd been wandering around the brooder.

this is the previous setup, the heater is now gone and the second lamp was added 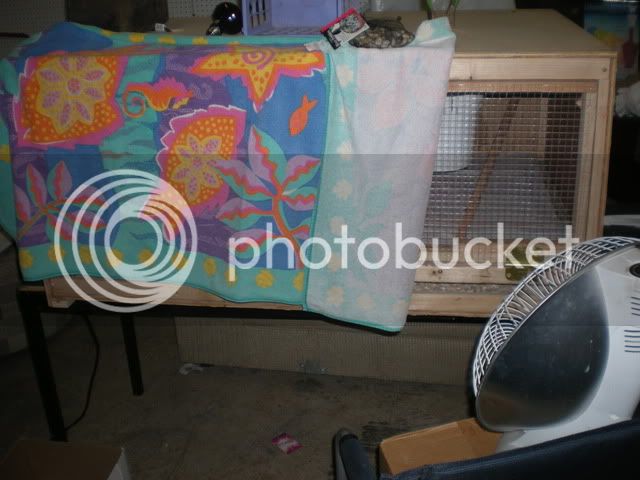 again, this is old. there's now a red lamp on the opposite end of the brooder along with the lamp in there now. The nipple waterer is also gone and I've made sure to see all of them eating and drinking. oh, and they are on pine bedding now 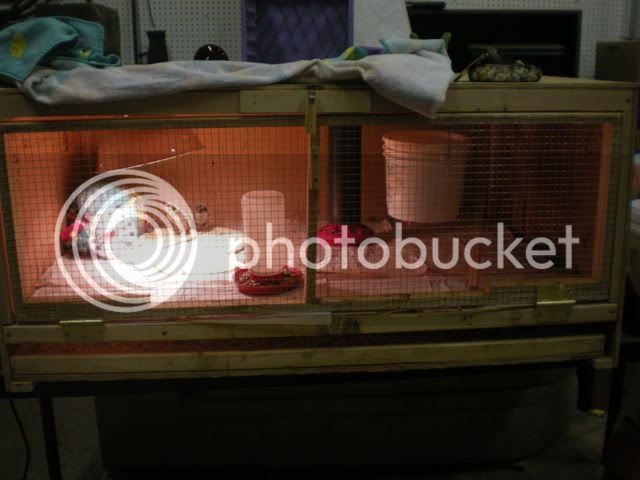 Sounds like your chicks are cold and maybe a bigger wattage heat light would be better than 2 low wattage ones. Our brooder was in our unheated garage and about the same size as yours but with solid sides. I just used one heat lamp 250 watts it heated a larger area (one end) so they could spread out under it and decide what was right for them. They had plenty of room to move away from heat if they where too warm. I didn't have any chick pile ups or acting cold even when in the 20's and 30's at night this Spring. I put a cheap thermo. in the shavings near heat lamp so I could keep tabs on temps in brooder. Low wattage bulbs might be ok for days now but a thermom. will help you regulate their brooder. Good Luck