Goat Udder "Issue" and a couple other issues - UPDATED with Pics

I bought a nanny with a kid a week or so ago. One of her teats is rather sagging and looks "leathery"
Ive seen the kid sucking from it but Im not sure if its getting anything
Going by her teeth I know shes over 5 but they arent too worn so I dont think shes more than 6..ish

Anything I can do to help this teat become more normal??
Ill try to get pictures tomorrow..
Last edited: Jan 5, 2012

pictures would help for sure.

is it rumpled/wrinkled looking? or crusty and peeling/cracked? if it's crusty, let me know, that means there's some tissue damage done, possibly from being over full at some point and this can be worked with but it's not too common, so I'll wait on all that until we see pics.

generally a rumpled looking, flat, saggy teat is simply empty. if the kid is working that side, it may be mostly drained most of the time. kids are sometimes 1-side nursers, causing the other side to over-fill and be at risk for mastitis.
you can milk a little out of both sides, just to make sure they are both producing. holding the kid away from the mom for an hour will allow a little milk to build up on that side so you can get some out if she's producing.

check milk from both sides to see if it looks and smells normal (no blood, funny colors, mucous, milk clots, etc.)
make sure neitheir teat is plugged (milk flows freely while milking once started)
palpate the udder on both sides to check for lumps, hard areas (can indicate mastitis)

if the kid is drinking down the one side, you may need to milk down the other to keep it healthy until he's big enough to need the milk from both sides and starts working the other.

anyway, that's my speculation until we have pics. side views of both sides and rear view would help.

The poor gal. Her knees creak (im going to start giving her calcium supplements) her hooves are over grown and have holes in them..
The lady said "they are long because you arent suppose to trim them when they are pregnant.." she offered to trim them for me but in fear she might "over trim" I declined and told her Id do it myself.
There is no way the last time these were trimmed was only a few months ago. She has "high heels" and holes in them.

...might be why her legs creak and pop so bad

Guess that is what Im going to name her...
'

..anyways..
It doesnt look as bad as it use to. When I grab it it feels swollen like.
I dont milk goats but I kiiinda tried it on my other goat when she had her baby last year and easily got it to squirt milk.
..with this one I cant even get a drop out of either teat 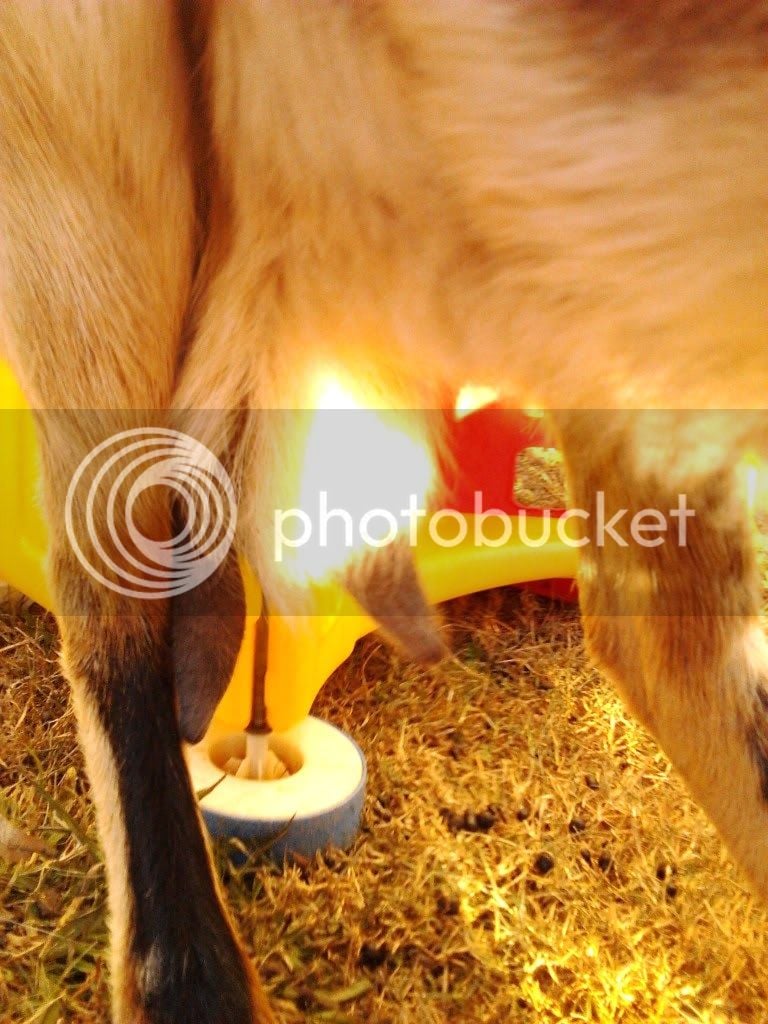 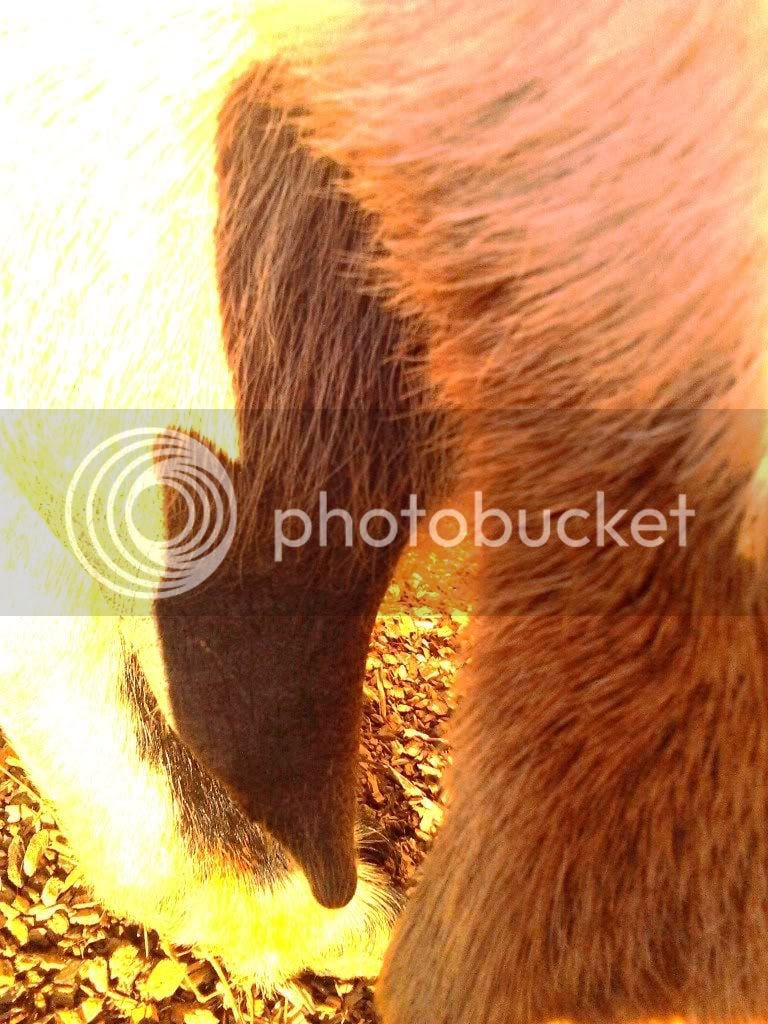 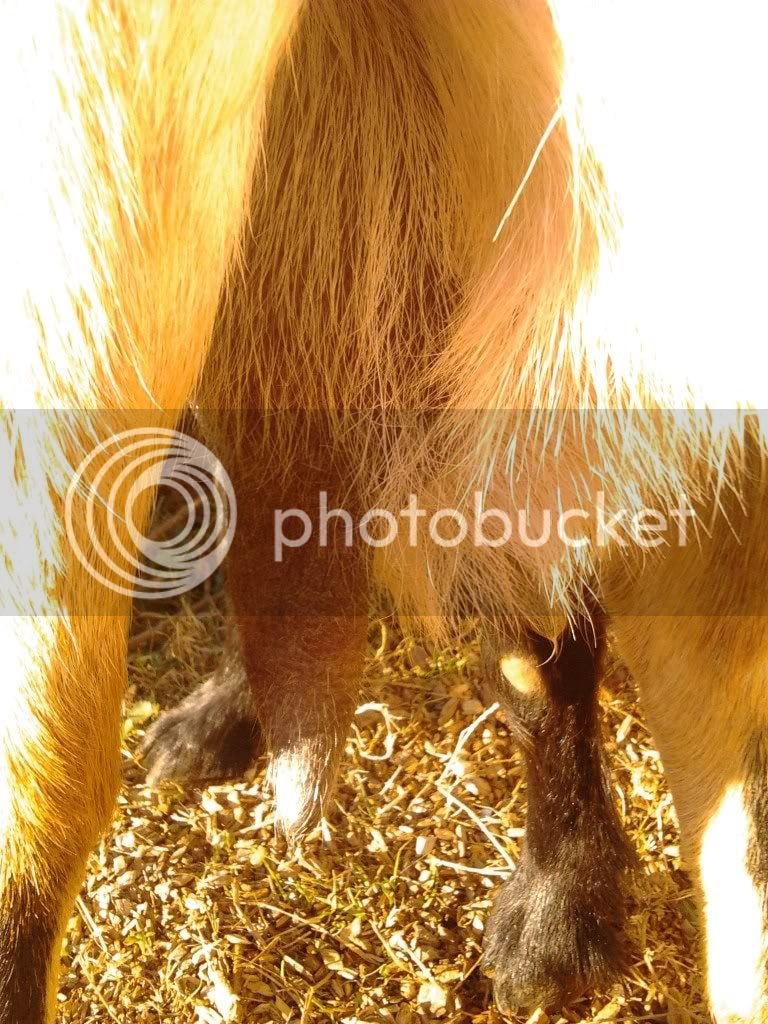 pics are helpful. the teats don't look unusual, that's what they normally look like when they're not too full.
if they get chapped, dry, crack, or you see any bleeding, you can dress them with bag balm - it's kind of oily jelly and it will soften the skin and help prevent and heal cracking... sort of chap stick for teats. these don't look like they need it, and sometimes the kids don't like the taste of the bag balm so it may interfere with nursing, so I don't use it unless it's needed.

as to milk... I don't see a lot of it here. some goats produce barely over what the kid needs, so if the kid is drinking often you won't see much accumulation in the bag. however, sometimes they're not producing enough and the kid can starve, so you need to make sure she's producing.

here's how to milk so you can check to see if she's producing:

pinch the teat completely off at the top, near the udder, using your thumb and index finger near the palm. this keeps the milk from retreating back up into the udder.
starting with your index finger, curl it tight around the teat pressing it against your palm, pressing the milk in the teat downward. middle finger next, then ring finger and little finger... so you're "rolling" the milk down from the top of the teat to the tip and out. if you get a good closure at the udder, and roll downwards, you should get milk out.

it's kind of like getting the last of the toothpaste out of a tube, start at the top and press the milk down, don't give it a way to go back up.

if you aren't getting any milk out of the teat after doing that, she may be dry. milk produced will flow down into the teat before it builds up in the udder and the udder starts to inflate. there is some natural mass in the udder, more on some goats than others, that may make it look somewhat full even if she's not producing. if the teats are empty and the udder looks full, it's not milk. mastitis scaring can also create bulk, but won't produce milk. both of these things can be true on one side and not the other, so you might have only one side working, or you might have mass on one or both sides but no milk.

you need to check the kid's belly to see if it's getting milk... belly should be gently round and feel full and a little springy or firm when you press on it. if it feels empty, or loose, or tucked up, you need to get some kid milk replacer and bottle feed or you will lose the kid.

what are you feeding mom? how's her weight? can you feel backbone / ribs / hip bones when you run your hands over the top? if she's thin, she'll need extra feed, some grain, to support herself and make milk. if she's feeling poorly and not eating or drinking she can stop producing, and she may or maynot restart making milk once you get her squared away.

biggest concern right now is 1) is the doe producing and 2) is the kid getting enough milk.

ZZ--I love your siggy line...sounds just like my place! Anyhow, the goat looks to be a 1 titter to me...I have a really old gal that still will have babies (but only 1 now) that had a really bad case of mastitis and lost one of her sides. The udder still feels hard but nothing will come out any more. I worked and worked on it when it still have some but finally the vet just said let it dry up. I can still smell the crud that came out of there!
Did you say that you bought this pair at auction? Unscrupulous peoples will put an unwanted kid on a useless doe to get rid of them both for more $$ than they are worth. I would take the kid away for a while and see (like ZZ said) if there is milk. If you have some other goat milk you could feed it to the kid just in case...or replacer, if you want. A few hours off of the "Mom" wont hurt him or her...at least then you would know.
Man, I hate when something is off with the critters....good luck! Terri O

yep, a bit of everything...

one titter is possible, just worrying about the possibility of a no-titter at the moment... no milk on onside and mastitis scar mass on the other.

She has a small red rub mark on the teat in question.. Ill watch it over the next couple days...
I did get milk to come out of both, so who knows?

No, I didnt get her from an auction but from a lady who had a TON of goats. I originally went to get a different goat but when I saw her, she is what I wanted.

Im feeding her a mix of the Dumor pellet feed and Dumor Sweet Feed.
Her back bone is a bit spiny but her ribs dont show. Her stomach is very collapsed on both sides but since shes been here shes fattened up a little..
She was very low on the totem pole at this place.. She hardly wanted to come out of the corner.
Even here she is still a little like that but I see her warming up. She just wants to keep her baby away from everyone.

Shes super shy of me as well and is even more shy now that I have been messing with her feet and teats..
When I come out the door she takes off running

yeah, sometimes they just get ahold of you... the needy ones.

if you're getting milk, that's good. I'd still might try to separate the kid for an hour or so and get enough to fill a tablespoon. put each side's worth into a baggie and look at it for clots or clear mucous ropes or globs and check it to see if it smells off. if you've got mastitis, that may require treatment, and it will kill the milk production if it's not handled.

sounds like she's thin. I wouldn't expect to see ribs this time of year even on a thin goat because they've got more hair on. a healthy weight would be "can't see ribs or feel them on the surface but can find them without much prodding". on some goats, you might feel them on the surface when they're nursing because they just won't put more weight on than that, and nursing leans them down.

you will have to make sure she's getting her share if she's low status, I've seen goats starving when there's plenty of food if they're not bold enough to compete for it. (bad neighbor! don't get me started on this one...)

you still need to be checking the kid's belly on a regular basis - if she's not making enough, the kid can still starve. you might have to suplement with extra milk until she's doing better and producing more.

I've seen boers with near-flat udders that were producing, but the kids were taking the milk off every 5 minutes before any built up. that's not ideal, it means the kids aren't getting all they want/need. had they been mine, I'd have been adding a morning / night bottle to top them up and keep them growing and healthy.

the sore spot can be dressed twice a day with bag balm... usually they clear up on their own, but if she's under producing and the kid is really working the teats to try and get more milk it may not.

Thanks for the info! Ill for sure get some milk out of her and take a look at it.. Ill go round the kid up now and keep him off her for awhile.
He seems to poke at her everytime she gets up..