Does anyone have any idea what might have taken my 11 Dutch Hookbills from their tractor over night?

They were about one month old and fat and healthy last night. This morning they are gone. I shut them in their chicken tractor as usual last night, this morning a board had been pulled off - the opening left is 2" by 3.5'. I'm sure the babies could have flattened themselves and gotten through the opening but it would have been a very tight fit. The rest of the tractor is intact and predator proof with hardware cloth and plywood covering the rest. The board that was removed was on hinges so I can move the tractor the let the board back down for a tight fit to the ground - I knew that board was loose but I never thought anything large enough to get the ducklings could get in.

They have been in this setup for two weeks with no issues.

There is no sign of a struggle or feathers or down or anything else out of place. The tractor is way too heavy for a raccoon to lift, I can barely lift a corner and I haul 50 lb bags a grain around all the time. The tractor was also surrounded by garden fence. This was just to keep the ducklings from wondering away during the day when we were around. It was not predator proof but the ducks never challenged it. The fence did not look disturbed.

Our dogs did not bark.

I've searched and searched but haven't found any of my babies and no sign of a struggle or "remains". I feel like such a bad duck raiser - I didn't keep them safe.

I need to know what might have taken them so I can protect the chicks that are scheduled to go into the tractor next.

I don't have the heart to try any more ducks. My only other try with ducks was an order of 20 crested Rouen's from Ideal. 6 died within an hour of arriving here, and one will never walk and is now a wonderful house pet. I was so thrilled when all the Dutch Hookbills survived their trip and thrived, and now this.

I have had predators take chickens before - but one at a time and I could always figure out how it happened and correct the problem. For example we didn't know we had owls until we lost a chicken who was roosting in a tree surrounded by electric netting. Now everyone is fully enclosed at night. We didn't know Sharpshank hawks would fly in the open door (2' x 4') of the chicken tractor that sits 6' from the house until I saw it - now all birds small enough to be taken by that little hawk are fully enclosed day and night.

Any help would be appreciated and thanks everybody on this forum for being so supportive and providing a safe place where people who love/care about their animals can share their high and low moments.

hmmm honestly if there are no blood, feathers, or other remains and no signs of disturbance I think maybe your predator was of the 2 footed kind AKA a human. do you live in the country or a suburban area with people close by?

if they escaped i'd have figured they would be back around within a couple hours looking for food since they knew where their food was given at...Fox, possum, raccoon would atleast pull a few feathers especially if they are trying to steal a bird through a small space...Foxes are the only thing I know of that will go in and take more than one duck or chicken at a time, and usually they kill what they are going to want to take first and then take the bodies one by one and again, no blood no feathers so I can't see it being a regular nocturnal predator....

I'd say string up some electric wire around the pens down low and up high or get a deer cam (the ones that are motion activated) and pull the tractor near a wall and face the cam over top of the tractor so you can see if its a four legged or two legged thief....thats really going to be the only way your ever going to know for sure.

P.S. don't beat yourself up, we all have issues happen...There is nothing you can do but your best to protect against predators and besides catching the perpetrator (sp) there isn't much you can do to protect again human thieves
Last edited: Jun 4, 2010

Human is what instantly came to my mind as well. There is usually some trace of a struggle, some feathers, ect. I am sorry for your loss. And sorrier yet that it makes you want to give up on ducks all together. Maybe you should try geese. LOL, get some mean old gander and just let someone try and take him...LOL.

Humans,, those are my only predators too.

thats what I worry about most even though I'm out in country, I have one neighbor "behind" me whom we share a front/back yard and his property goes off in the woods and we share ducks and chickens...but his son lives to my right and the son and I do not get along AT ALL...and he's come over to my house hooting and hollering and having a hissy fit because I went and gave his dog water one day when he wasn't home and since he's been showing his tail whenever I'm out in my yard and tries to get on my nerves etc...he doesnt and i'm afraid he will eventually try to steal or hurt my chickens, ducks, or dogs(outside/inside - inside @ night though thankfully) at night or when i'm not home...I have essentially booby trapped that side of my yard, I have a near invisible electric fence right on the other side of some bushes that line that side of my property, its only 8" off the ground, but if someone doesnt know its there they are likely to strike it with their ankles, and I also have a 'spike strip' planted right there as well took a strip of rubber matting cut it to about 2' wide and planted small nails in it, it sits right in front of the bushes so from his side he can't see it, and these bushes are the most likely spot he or his 'friends' would come in at, because its an area that has little light and also is out of sight of my dog's run area, so anyone with half a lick of sense would shoot for that side of my yard to try to enter...

I should be getting a night vision motion sensor camera next week, going to pick it up about an hour away from me, only paying 25$ for two of them, and I have to figure out how to set it up and work it. lol, but...because I have a feeling this idiot will eventually try something with my property or animals I am being proactive.

I dont appreciate being messed with - lol.

P.S. this "feud" has only been going on about 3 weeks, but it hit the ceiling cause I went and watered his dog because the dog was about to have heat stroke and his daddy (who owns the property) didn't have a problem with it. but with his being gone (the son I dislike) to jail this past 10 days, I had time to boobytrap that area of my yard

and sure enough he returned wed and started showing his butt again, riding his dirt bike on the trail between the properties and along his dad's and mine's property line and letting loose the dog I watered and ticked him off and cutting his music up and hooting and hollering every time I came out the back door...its getting old, but I'm trying not to get the law involved if I don't absolutely have to, and I have to have proof ( I need to break out my vid cam

) that he's dealing drugs over there, so if I'm going to put my neck out I'm going to make sure I do it right. its one big ordeal....


I suggest you get a motion camera definately, they're reasonably cheap new they go for as cheap as 30$ each at some sporting good chains. 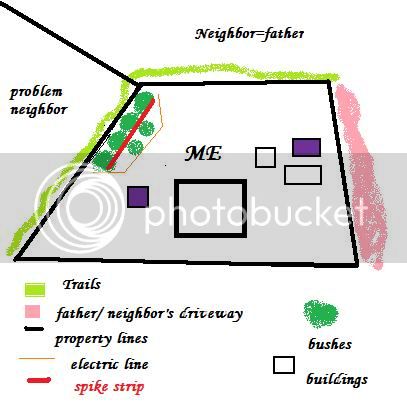 2 legged immediately came to mind. I would start watching craigslist for an ad selling YOUR ducks! It's not like hookbills are common.

NO! That's bizarre - and heart-wrenching!

If a predator got them, there should be some sign, some trace.

But then, I just can't imagine someone coming and stealing your ducks in the night either!

I was so excited that there was someone else keeping Hookbills here on BYC and not making fun of their "Barbara Streisand" noses!

Thanks everyone. The thought of humans went through my mind. I thought the snap I use to keep the door shut was put on backward, like a left handed person had snapped it. But I really don't remember how I put the snap on last night.

I've read that others have had ducks stolen but I of course thought "not around here".

I sold some pullets and young cockerels over the weekend. They saw the Hookbills and I explained about how rare the Hookbills were and how I was looking forward to raising them. While I don't believe these folks would steal them maybe they told someone about them. Jeeze, I said they were rare, I didn't say they were valuable. Even a rare duck is only worth so much money. They were worth so much more than money to me.

You folks did confirm how strange it is that all of them could be taken by a predator through a little opening without any signs of a struggle.

I'm still hoping they will show up, or at least some will. I'll keep an eye on craislist.

Scaredofshadows, what an awful situation your in! I can't imagine having to spend my time protecting my house from my neighbors. I understand not wanting to bring the police in but you might just want to touch base so they know you are having issues.

Of course now it looks like I'll need to start protecting my house more prudently.

Quote:
I have a lot of time on my hands, so I'll keep an eye out for you too. I actually went and checked the Rockford craigslist today, as soon as I read this! I can't believe someone would steal your ducks instead of just asking to have first dibs on buying ducklings! It makes me so angry!