Got my chicks in from McMurray Hatchery...

About a month ago I put in my order for chickens. The wife said we needed chicken in our freezer again. So I went with McMurray as I wanted to be able to select just a few extras for pets for the summer months at my mother in law's country home. I checked with a friend who has a hobby farm on the edge of town and he said he'd be glad to let me raise the chickens at his place. Once the meaties are gone I'll take the extras out to my mother in laws to spend the summer and fall out there. And maybe spend winters back at friend's place.

Anyhow, wife and I discussed about how many cornish Xs we wanted. And we decided 25 was good. Well knowing that you generally always lose some, I ordered 27. Then I spent some time trying to decide what other chicks to add to the order just for fun. I chose a trio of light brahmas, and added a single dark brahma pullet. And then I thought, I'd hate to have just two or three pullets for a single brahma rooster... As I HATE how hens can look when roosters are hard on them. So I thought, oh why not. Toss some more chickens on the order. And so I added three black star pullets and three partridge rock pullets. I asked my friend what he'd like in payment for keeping my brood at his place. He at first insisted nothing. But I told him, I'm ordering from McMurray and can add a few pullets for you. He then said, ok, I'd like six buff orpington pullets. So I ordered eight. Placed my order. My friend told me he'd have space availble after his sheep had their lambs. He told me he should be done lambing the second week of March. So I had their arrival date set for today, March 8.

And so I set up their brooder here in the house. I wanted to keep the bunch at home for at least the first week. We have some space in a room that the door is always kept closed. I set up some three foot high peices of cardboard in a box shape, and then lined the thing with a huge bag used for large cardboard totes. This way, when they get too stinky, I just move out the chicks, feeders, and pull out the bag and out to the garbage. All neat and simple! And just put in a new bag with new bedding. At least, that's the current plan and it seems to be working.

Last week when I was dropping off a package at the local post office, I let my Post Master know that I was expecting chicks this next week. I told her to please give me a call as soon as they are in. No matter what time, I will come and pick them up. She said, ok, will do that. I'm sure they'll be here at around 6 am.

So, Saturday night I'm at work, as I work night shift at the pasta plant in town. I get a call from my wife just before 2 am saying the post office called, the chicks are here! I was shocked to say the least! She then told me the lady said she'd be at the post office till 6 am. Wife told her I'd come pick them up when I got off work. Well, we had to work late and I got off about 4. That poor old car FLEW across town to the post office. No one there...no lights anywhere, no one answering the back door's doorbell.

Hmmm.... I went home, and woke the wife. Oh I know that's very dangerous to do, but I woke her anyway. I had questions! She assured me that she didn't dream the phone call up or that she was going crazy. So I went back to the post office to see if perhaps they stepped out for a moment. Nope. nadda. Came back home all frustrated and angry now. Cause wife said the lady said she'd be there till 6 am. It was now 5 am. It's a mere four blocks away from where I live. Wife tells me the lady did say if I didn't get them this morning, to come Sunday night at eight. Well, I did try that too, but no one.

Found out this morning, Monday, when my Post Master called to say they were in... that the little detail the lady who called that late Saturday, early Sunday morning was...it was JAMESTOWN post office calling...42 miles distant! DOH! It hadn't actually made it to Carrington! WRONG office! So all was forgiven. Lesson learned! LOL!

So I got home and had the brooder already set up and opened the box, and a very excited five year old daughter and I placed them into the brooder under the lamp. I didn't bother counting them. oops...another mistake... But found much to my surprise, NO DEAD CHICKS! Yay! So I spent the next three hours it seems hanging out beside the brooder, dipping beaks and showing them their food. Getting the green chick gro stuff on top of the chick starter in the feeders. They really do love that stuff! Three hours later and it's basically all GONE!

I thought we were going to lose a meat chick. It kept wanting to just lay on it's side and gasp and not really move even when I picked it up. I carried it over to the waterer and dipped his beak in several times. I could see he was taking some in. I'd put him back under the lamp and he's sit up ok for a while. And then plop back over on his side, legs out, and gasping with eyes closed. I'd wake him up again, and had him drink more water. I thought for sure this chick was a goner! But now three hours later I couldn't tell you which one it was. They all seem just fine now. I'll have to find some treats to help entice them to think hands are a good thing and talk to them some more. I want a tame flock!

Hmmm... So I looked over my now thriving brood and started counting different ones as best I could. Too many cornish, can't quite count to 27...got to 25 once, but too many birds moving around...LOL! Was easy enough to count the black stars and Partridge rocks. Brahmas...well, there were four that fit the picture given for that variety. They even have that serious look and large blocky look already! Then there's this constantly LOUD peeping thing with fuzzy toes that never ever seems to shut up! Well, at first I thought it was our exotic. But no, looking at the McMurray website chick pic of a Dark Brahma...yep! It fits! And I was able to count that yep, we have eight orpington chicks. So now I have a problem. If our exotic is in there, it's masked as a cornish chick. Cause everyone else on my order is accounted for! And the receipt says the free exotic is marked as present! Gah! Well, I've yet to find this invisible exotic chick.... My guess is it might have been marked on the box, but it isn't actually IN the box that I recieved. Oh well, probably would have been yet another rooster right? As luck would probably have it, one of those orpingtons is bound to be a rooster.... It's just how those things go...usually...

So that's where I am at present. Another successful order at this point, from McMurray Hatchery. Sometime later tonight I might haul all the meat chickens out into a box so I can do a head count and really look them over. Just seems odd, after all. I got charged for 48 Marek's vaccinations...and 48 would include that exotic chick...hmmm.... Very strange indeed! My bet is whoever was doing up the box must have seen that single dark brahma pullet in there sticking out like a sore thumb and no doubt making as much noise then as she does presently and thought, oh we got the single exotic in there already... Betcha that's what happened. So I didn't probably get a free exotic. *sniffle* LOL!

Here's some pictures. I know how annoying it is when people don't post pictures! So I hope this sample suffices... Enjoy!

As I keep telling my daughter the only names the yellow chicks get are...names referring to edible chicken parts....Drummie...Fried...ect... 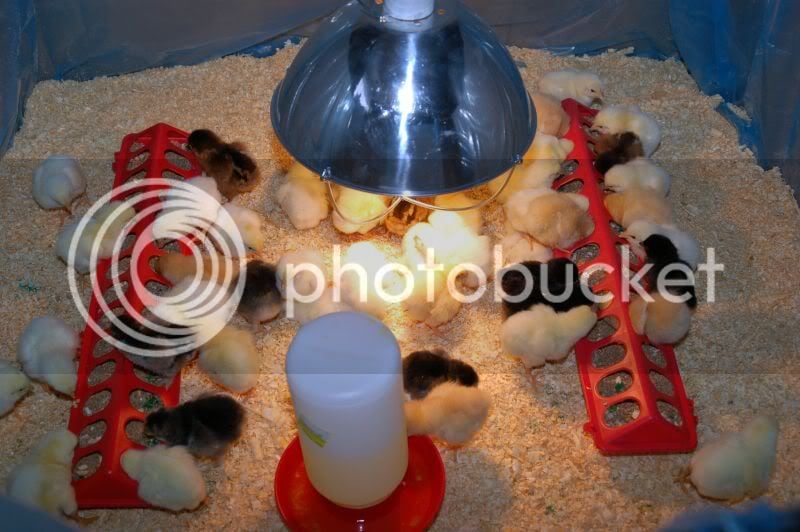 I've never had partridge rocks before. But I know what they look like. Just never had any of my own. Very tiny chicks compared to the rest of the mob. 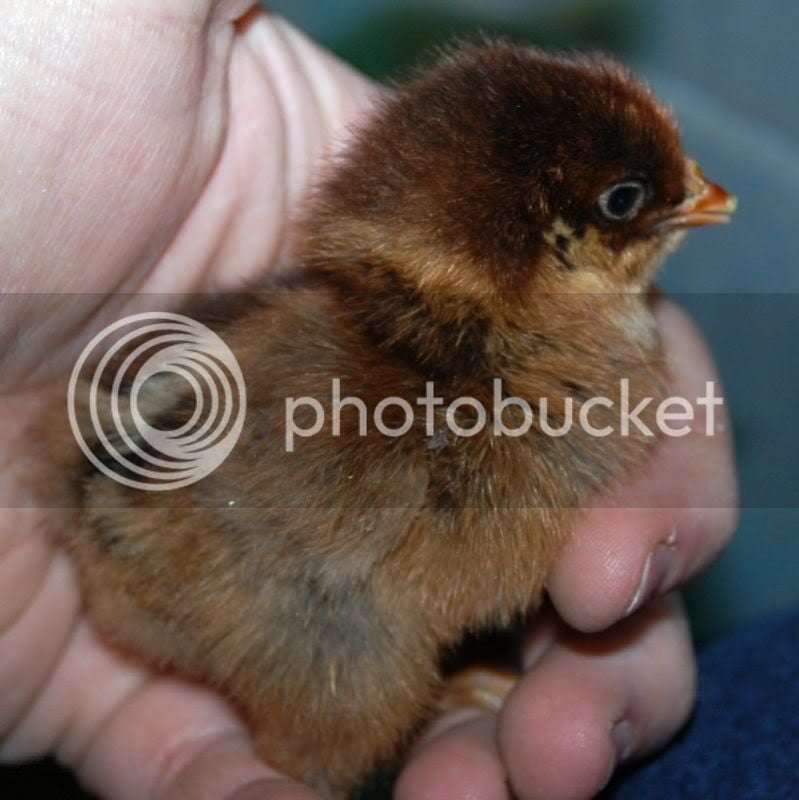 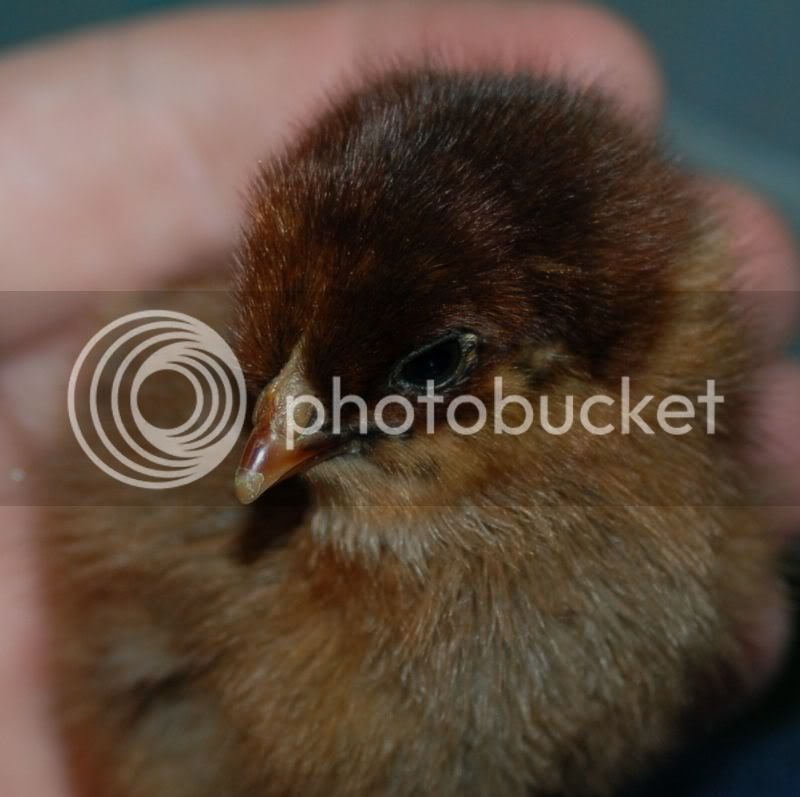 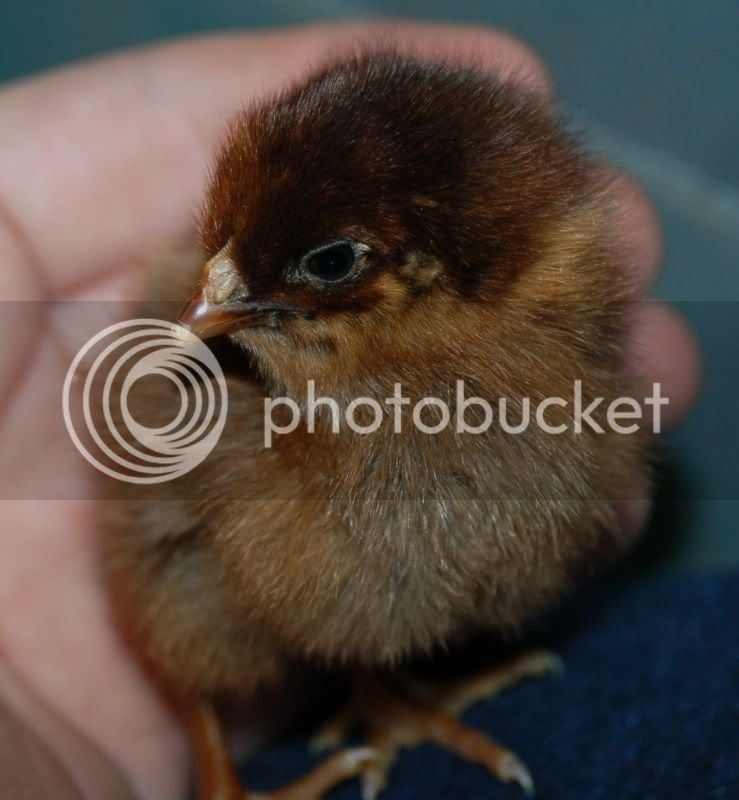 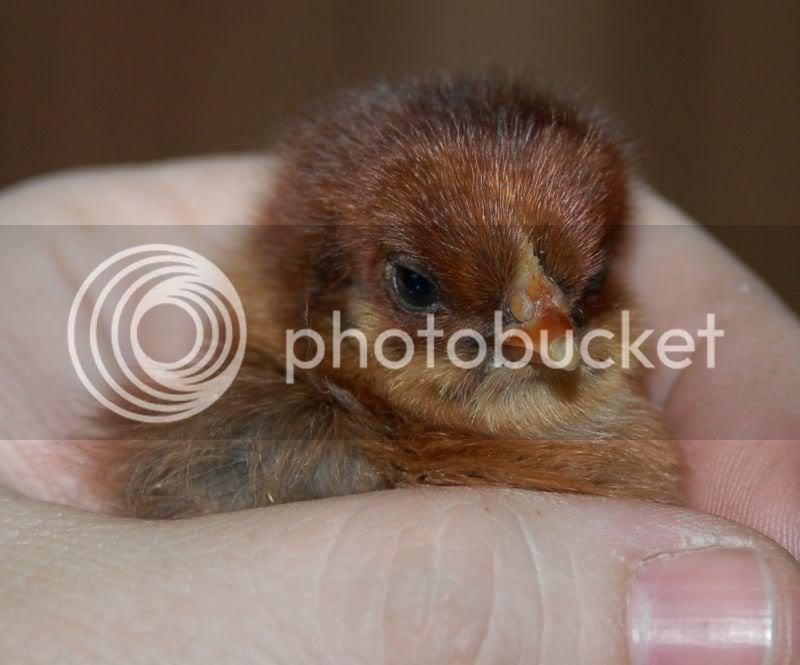 One of my light Brahmas. I'm really liking these guys! Very cute and curious. 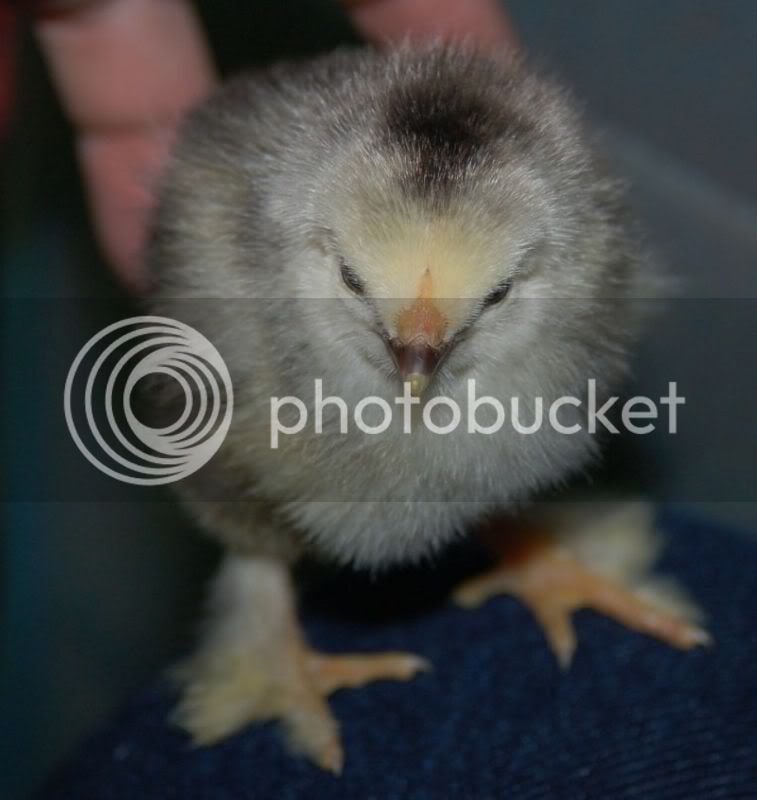 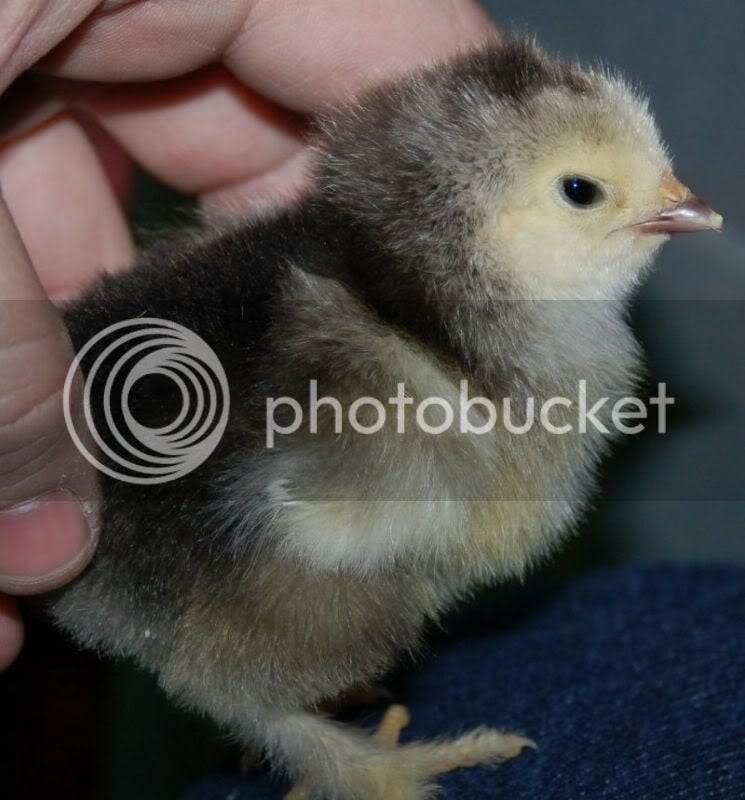 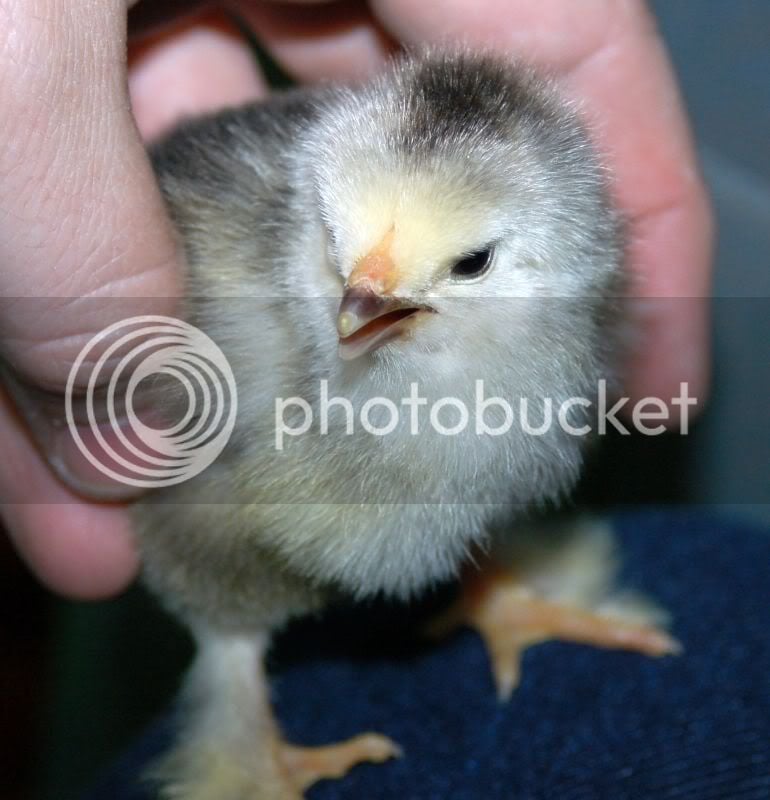 This is the loud obnoxious one...LOL! I looked at that nose and it looks just like the other brahma's at this point. And the fuzzy feet are telling too. So I think this is my single dark brahma pullet. And also what I think the one boxing chicks mistook as the rare exotic chick. 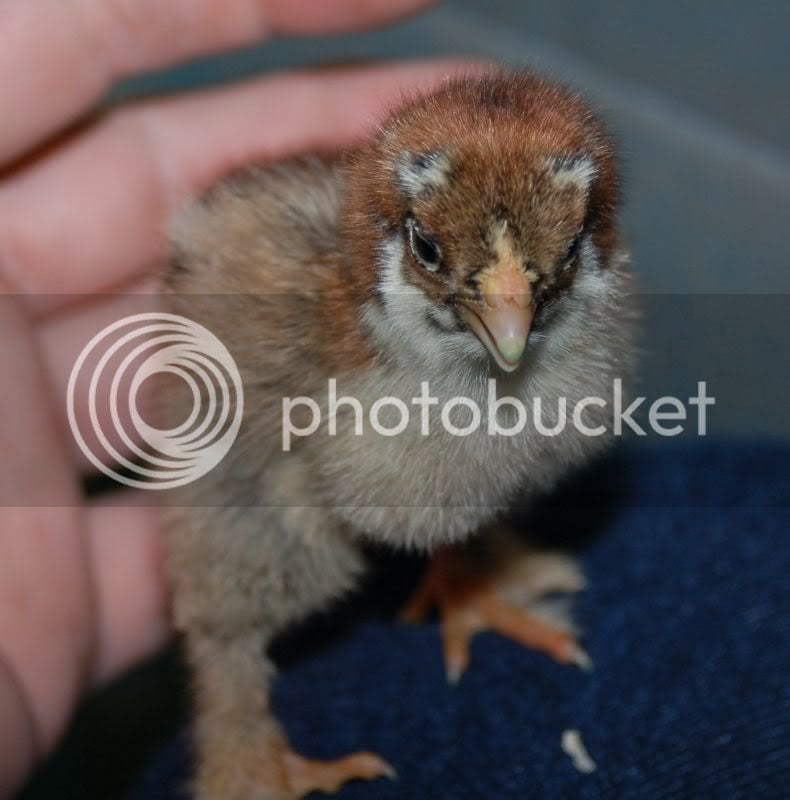 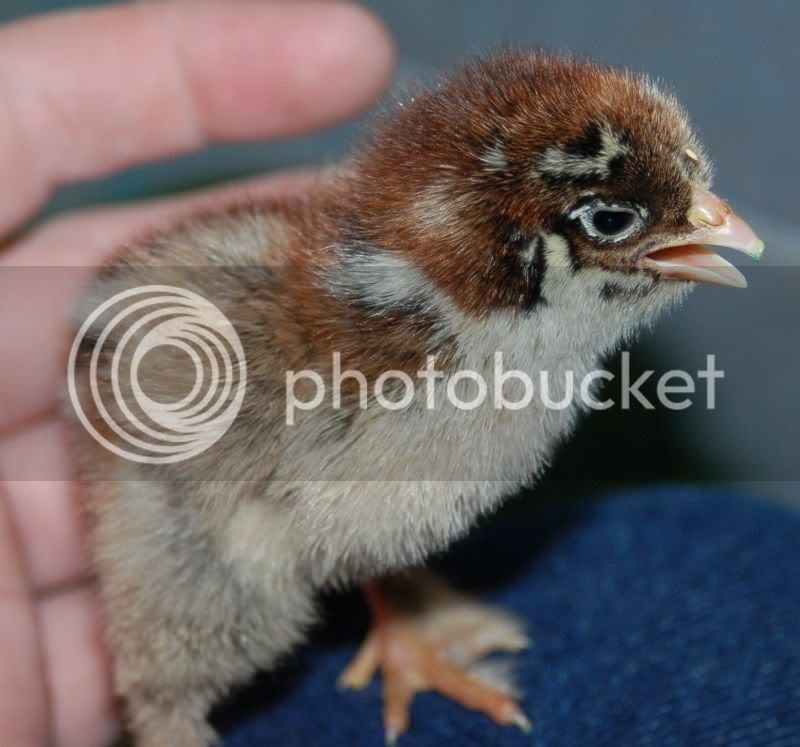 Back in high school I did a chicken project. The summer before I left for college. And I included a few black stars in my order. Those three girls went on to win me reserve champion at the county fair. And then went on the rest of that short summer laying HUGE light brown eggs. I love this variety! And had to put a few in this order. They like the partridge rocks, are small scrawny things. But that is how I remember the first three I had! Start out that way, but seem to survive just fine. 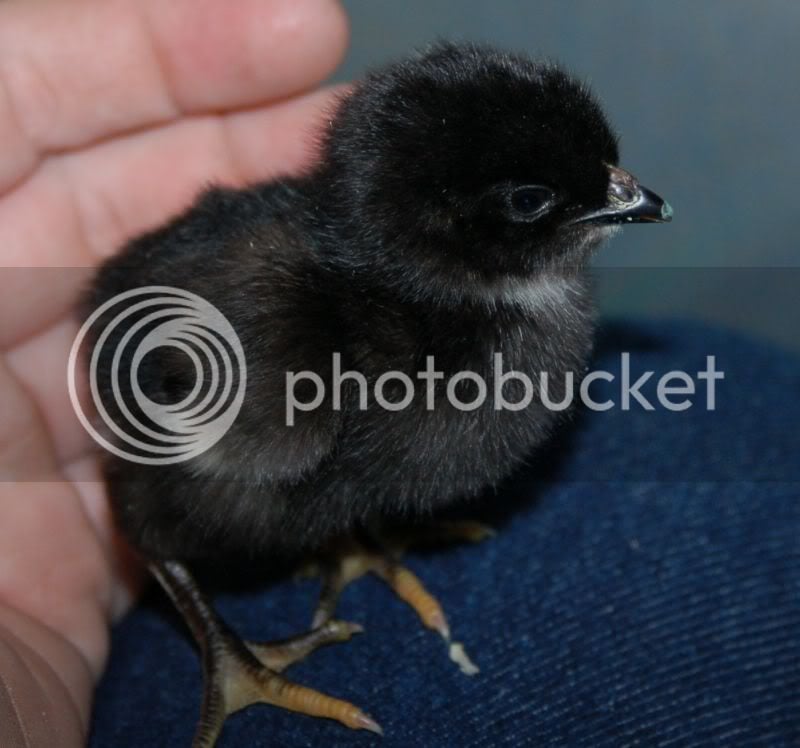 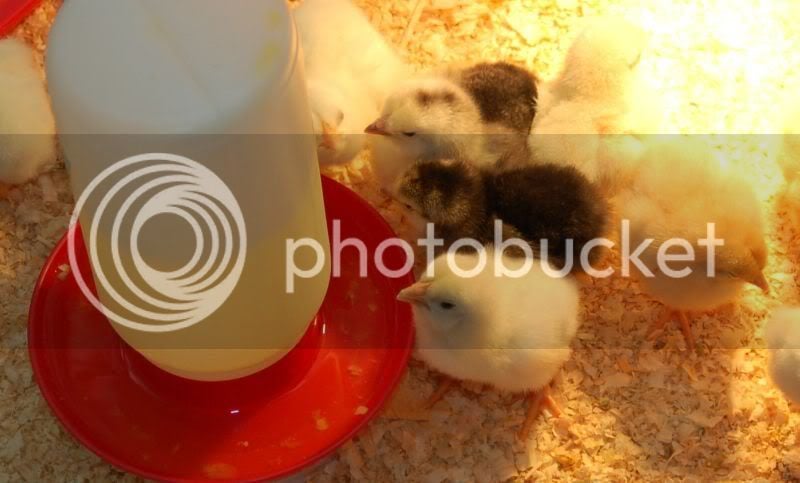 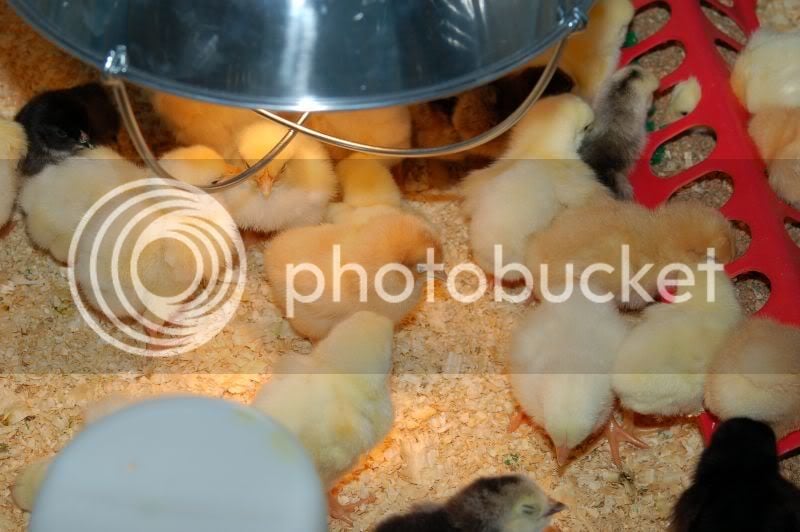 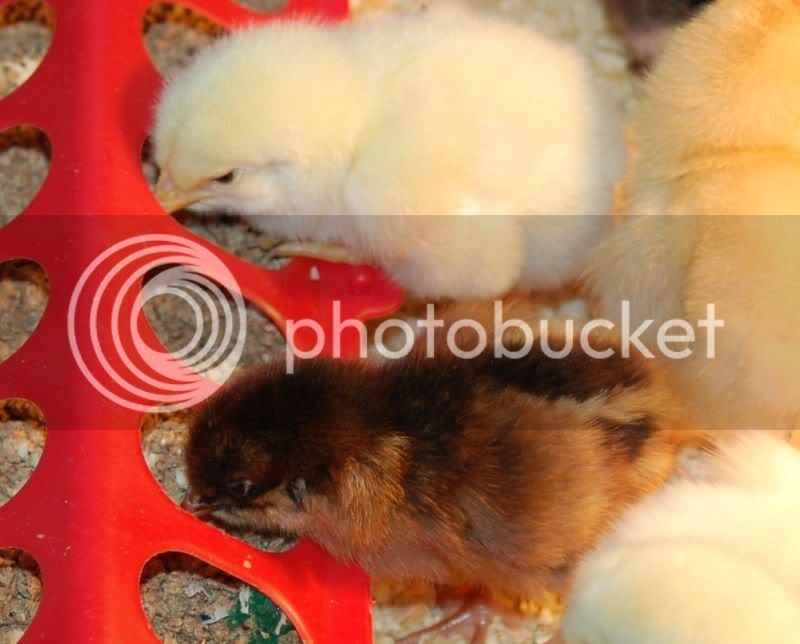 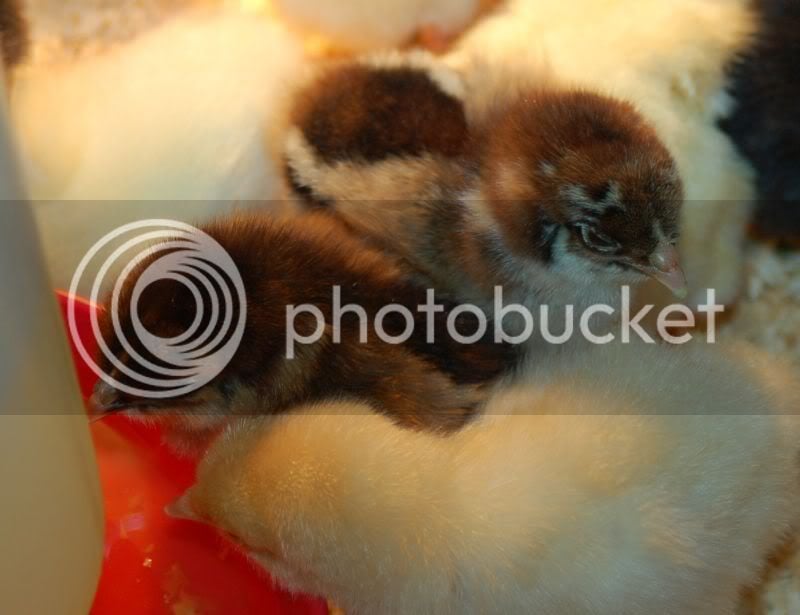 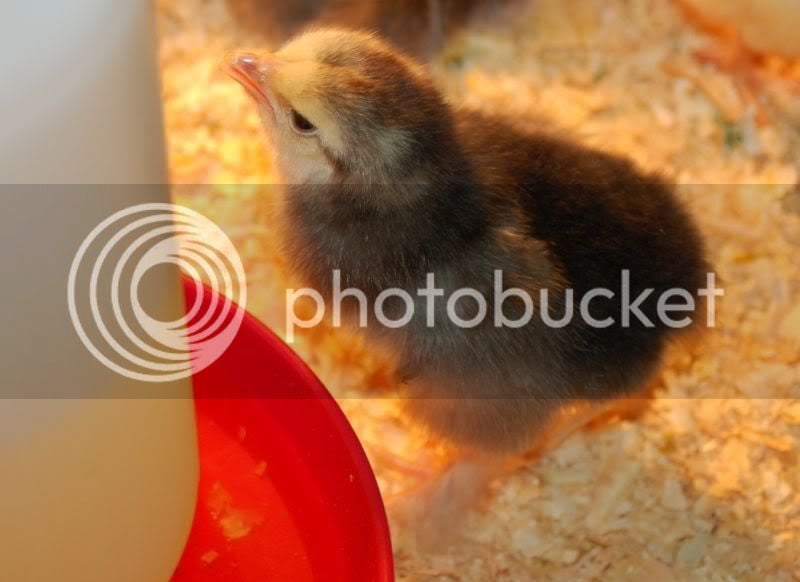 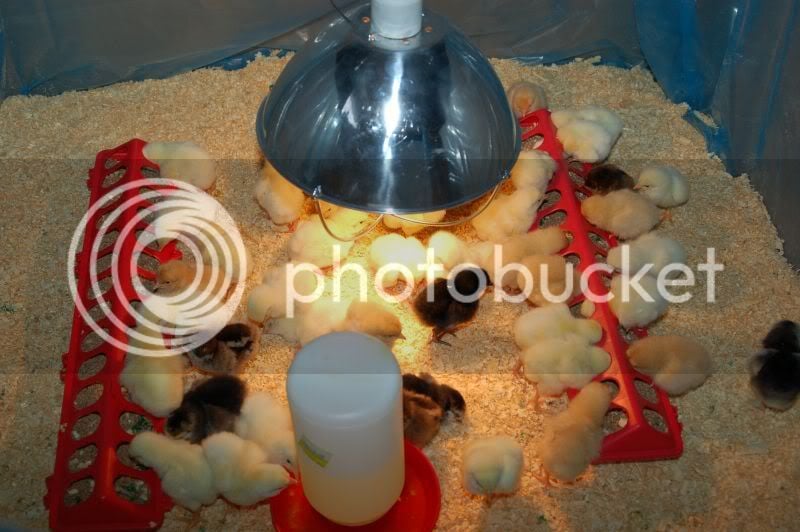 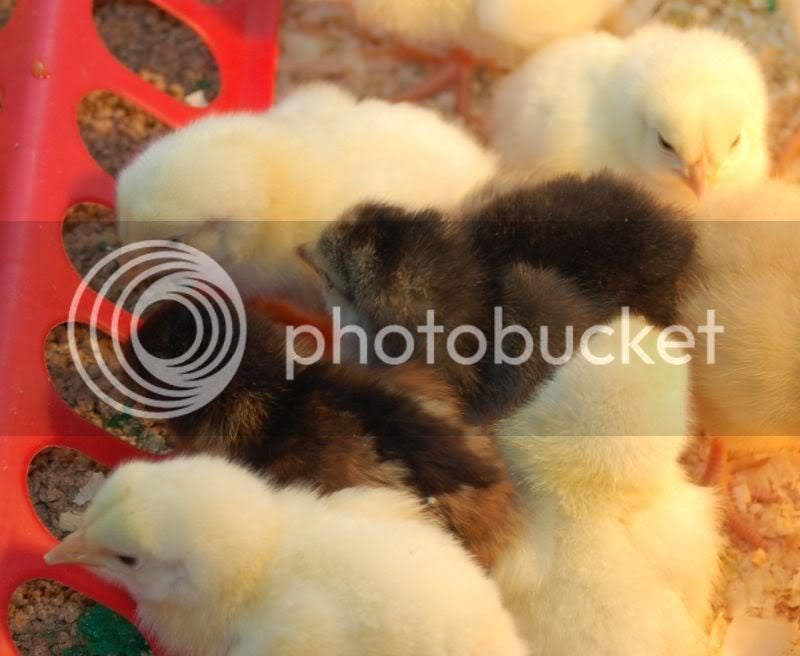 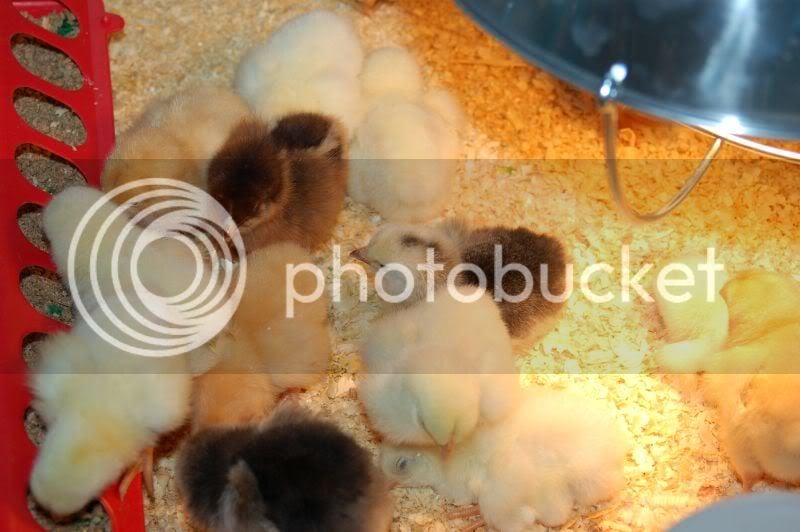 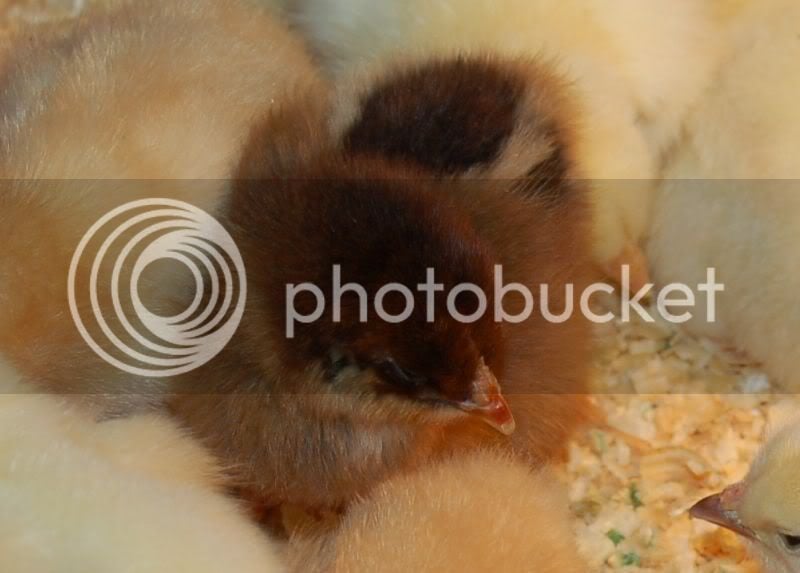 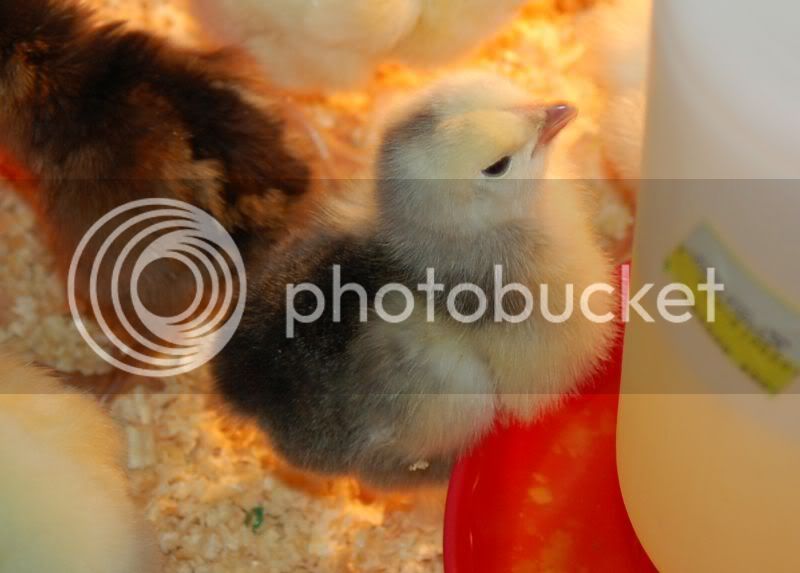 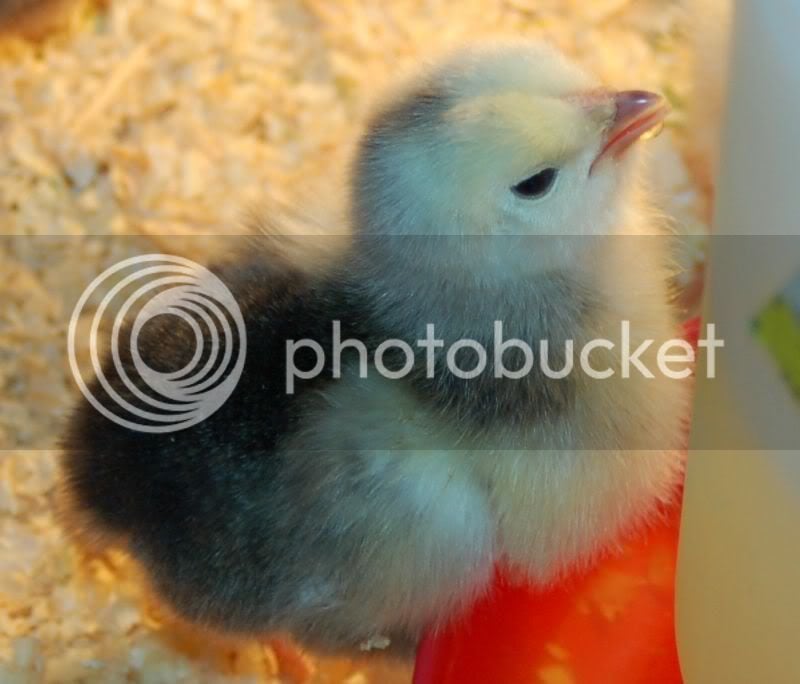 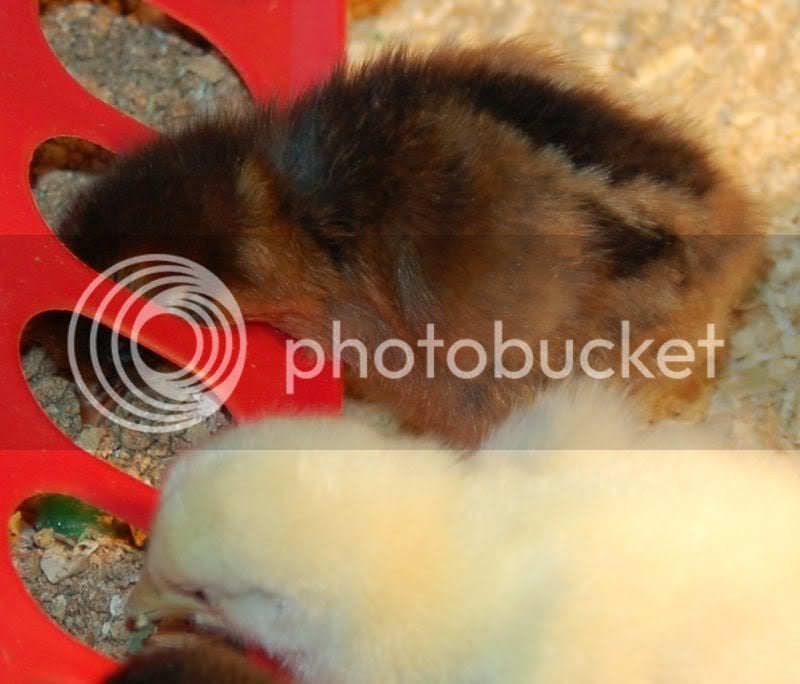 Talk about diving into your food...this little cornish cross is intent on making himself grow...eat eat eat!!! 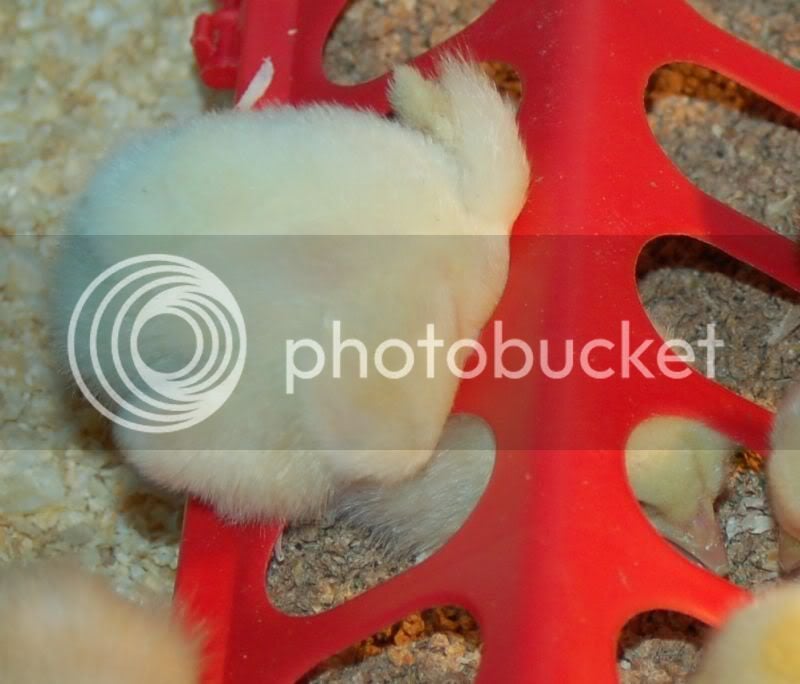 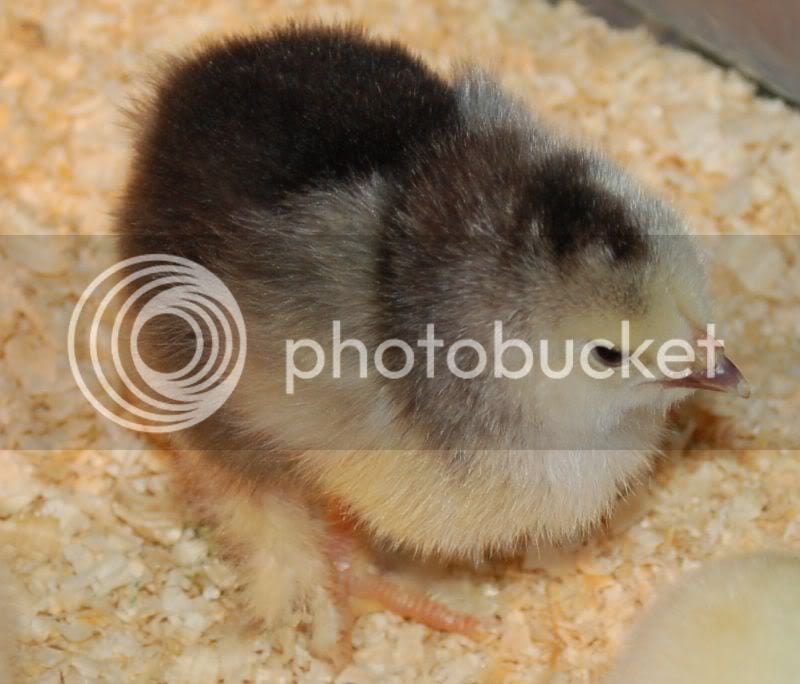 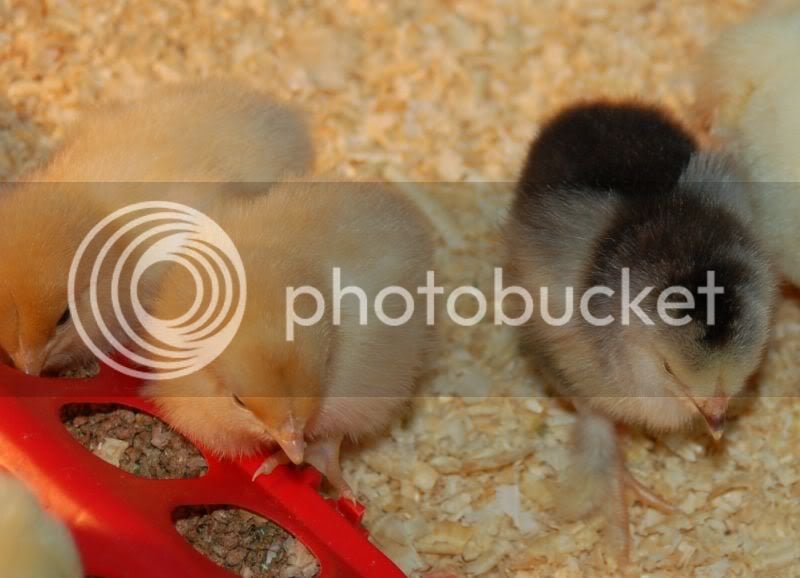 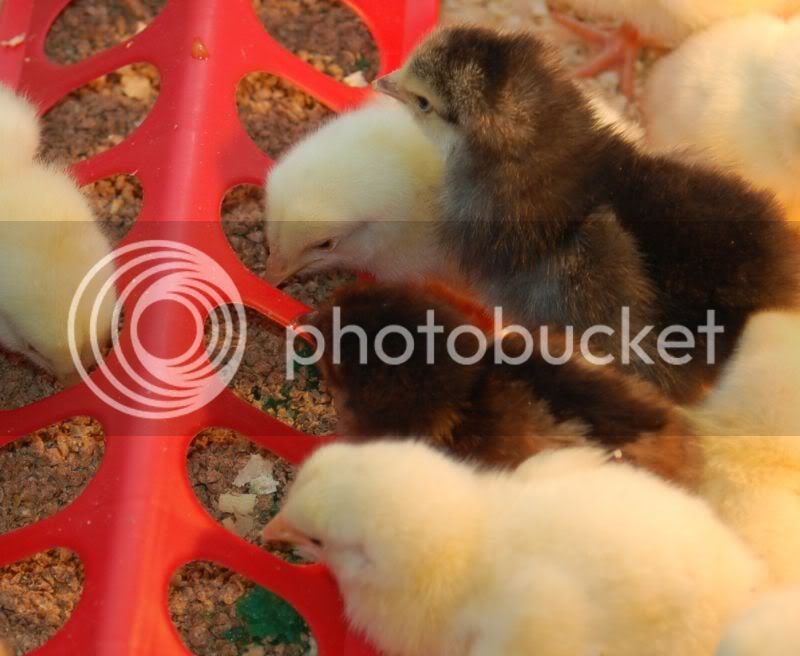 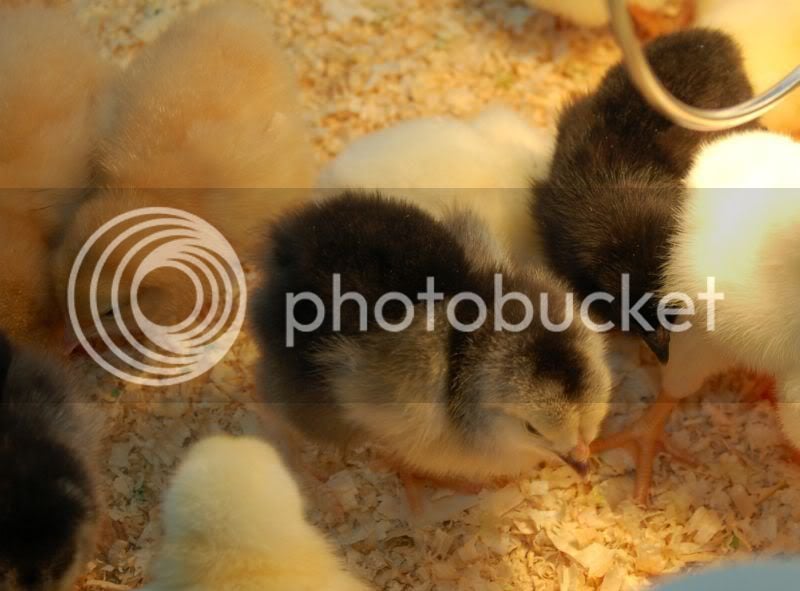 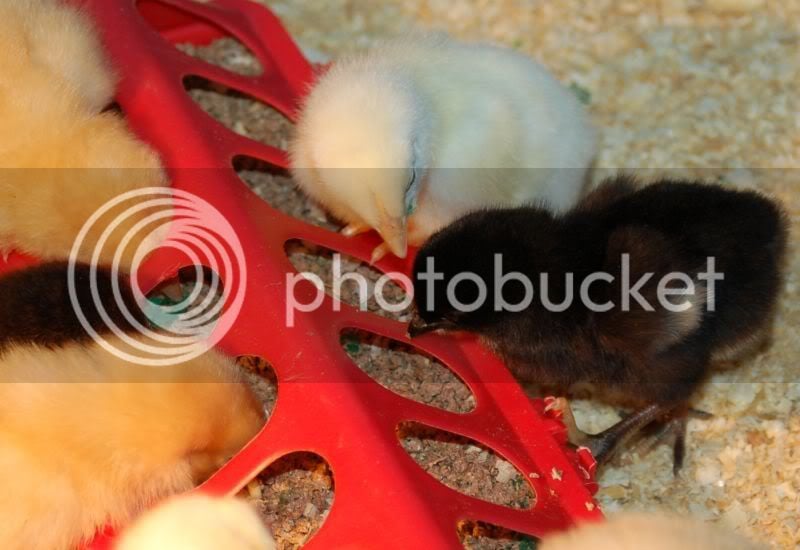 I ordered from McMurray and also got my chicks yesterday. I got 26 cornish and one free rare. He looks exactly like your feather toes Dark Brahma! and he/she is LOUD LOUD LOUD...I named him Petey on the way home because he was so much louder than all the rest of the chicks

My husband says naming him is a bad idea, because we aren't supposed to be keeping any of these chicks, so I told him it meant Petey Pot Pie... We'll see if "he's" a girl or a boy

That's a lot of chicks! And they are precious!

I love all the pictures. Oh I can't wait to go pick up my fluffy butts! Come on 22nd!!

what beautiful pics! i enjoyed looking at them!

You are able to get amazing photos! Those babies are adorable. Love the Cornish "dinner diving"

yeah, wasn't till after I was looking at photos on the computer that I realized that hey, look at that shot on the side! That chick dumping into the feeder like that is awesome! He he he.

Anyhow, thanks for the complements everyone. We are having fun. This is the first batch of chicks my daughter gets to experience here at home. If she had her choice, she'd spend all day playing with them! I finally had to shoo her out to give them a break! And wow are they going through the water fast! I'm seing that my ONE little waterer isn't going to hold out with this bunch! Need to go shopping for a bigger one. Hmmm...wonder what's at TSC...hee hee hee.