help needed male or female, new to this

Im new to this forum and keeping chickens so any help is much appreciated.

We brought the following 12 weeks ago and they were between 6-8 weeks old.


The are not laying yet but the west sussex and the buffrock seem to be crowing like a cockeral. I rang the breeder and he said there isnt an easy way to see if its a pullett or rooster until they dont lay anything.

Please take a look at the pics and i will try and attach a video. Really ned to know if this is normal pullett behaviour or if it is a rooster. They are between 12-20 weeks old I do not see any pictures, so maybe try adding them again? I think that you may need to have ten posts before you get the ability to add pictures.

However, the breeder is wrong in saying that there isn't a good way to tell if you have a pullet or cockerel before they crow or lay an egg. In most cases, a rooster will get a larger, redder comb by the time it is eight weeks old. At the same age, a pullet's comb is usually almost non existent and a pale color. Roosters get pointy hackle (neck) feathers and saddle feathers (the longer pointy feathers near the tail--hens don't get them) by the time they are four months old or so. A hen has blunt hackle feathers, not pointy. Also, a rooster gets sickle feathers (the long feathers on the tail). These take a longer time to grow in, but you should start seeing these by the time they are five months old or so.

Edit: While I was typing, you must have added the pictures. I see them now. Your Sussex and Buff Rock are both roosters, but your Hamburg is a hen.
Last edited: Sep 17, 2013

Welcome to BYC - pictures are not showing. If as young birds they are crowing, you most likely have a couple of cockerels. Upon occasion I have seen crowing older hens, I have never seen a pullet that crowed.

If they're crowing - they are roosters, especially with them being young.
Last edited: Sep 17, 2013

Your photos don't appear to have worked. Hens will sometimes crow as they become older and egg laying stops, but if you have some crowing "pullets" at this age, they are almost certainly roosters. Unlike what the breeder said, there are ways to sex birds even before they lay an egg. Roosters will develop pointed hackle (neck), saddle, and tail feathers, while hens will have rounded feathers in those areas. Roosters may also have more shiny feathers, have a more upright stance, and will develop larger/redder combs and wattles.

hi thanx for your replies, my kids are going to be gutted when i tell them tomorow as they were tiny when they chose them 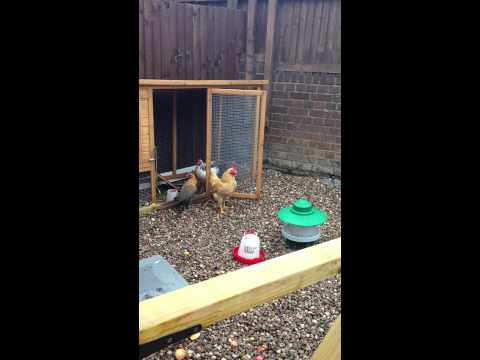 well, that would be a roo

mattsinger said:
well, that would be a roo
Click to expand...

Your breeder's full of it. There are easy ways to tell if a bird is male, and crowing is pretty much the definitive! Plus those hackle and saddle feathers, those birds are just male.