We have a >1 year old hen who has been missing a patch of feathers on her back for a couple weeks now. When we first got her, she was the smallest of the bunch and had a patch of feathers totally missing from her neck, but those have fully grown in now. While all of our hens occasionally peck at each other, it never looks like enough to have done this much damage. We also have a male turkey who occasionally tries to mount the hens. Perhaps the damage could stem from this? I'm also thinking it might be some kind of mites or fungus.

The birds eat layer pellets and life in a pretty big barn with straw bedding. They roam freely around the yard during the day and get plenty of exercise. I've included a couple pictures below -- it was raining today so the bare spot is pretty pronounced with all her other feathers matted down. (You might also notice a bit of frostbite on her comb, but that's been clearing up -- it was a hard winter!)

What would you recommend we do? If it's a matter of other birds picking on her, we could just isolate her until the feathers have a chance to grow back, though I don't think she'd like this. If people think this looks like some kind of mites or fungus, what kind of powder or spray should we get? Thanks for your help everyone!

do you have any roos? other than the male turkey??

Nope, no roosters. Just the turkey, who we were told was a hen when we got all of them as chicks! Another hen has feathers fluffed/messed up in a similar spot, and our third hen -- who is the biggest and as far as we can tell is left alone by the turkey -- looks perfectly fine. The spot just looked so raw and bloodied, I thought it might be mites, fungus, etc. 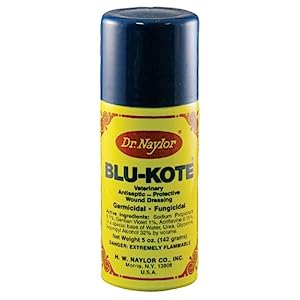 Seeing as Blu Kote is apparently a cure all for abrasions, fungus, AND bacteria, I think I'll try that. Covers every possibility. Thanks!

real good stuff just be sure when using it that you have on old clothes and gloves cause your gonna get purple.

Quote:
My bathroom and my face have seen their share of purple dots.

Actually I still have a bunch on my arm. I learned to wear gloves after the first spraying.

Quote:
It has helped a lot with the whole scalping incidents I have had with a few hens. Clean them up spray and let dry. They get the royal treatment too. They get to stay in one of my spare bedrooms

Some of my girls get that too. Although it might be the picture, but it looks like there is blood. I have not seen that in mine. I originally thought it was bugs, but after examinations, I have yet to see any. I believe it's probably from my roo. When it happens, none of the other hens seem to peck at it.

Quote:
It has helped a lot with the whole scalping incidents I have had with a few hens. Clean them up spray and let dry. They get the royal treatment too. They get to stay in one of my spare bedrooms

What do you mean by "whole scalping incidents"?