How do I build a secure fence without going overboard?

I hope this isn't a thoroughly hashed out subject, but I know that if it is someone will kindly point me to the thread(s) I need. I did do a search and mostly came across threads concerning garden and electric fences. I'm talking about fencing in the run adjacent to the coop.

What are the essentials of a fence to go around a run? I know I have to keep out predators and keep the chickens in, but how? My idea was to sink wooden posts, dig a trench a foot deep, put 46" wide hardware cloth into the trench and attach it to the posts, then fill the trenches. That would give me a 3 ft high fence of hardward cloth. From that point up another 3-4 feet (I'm short, so 6 feet gives me head room to spare) of chicken wire would go all around. Then I'd top it with deer netting. So, here are my questions:
*Would that be going far enough? Too far?
*What size wood for the posts and frames? 4x4? 2x4? My husband says 2x2 should be good enough, but could a strong dog or raccoon break it?
*Do I need to bury the hardware cloth, or would a "skirt" around the perimeter be enough? Is 12 inches a good depth (or width, if a skirt)?
*Is it Ok to switch to a cheaper fencing material above the 3" level, or will raccoons just shimmy up and shred the chicken wire?
*Is the entire idea of a wire fence just kooky expensive and tedious compared to electric fencing? Clearly there would still be a need to protect against flying predators if I use electric; would diggers also be a problem?
*How do I put a door on this thing to let me in, without creating a huge gap in the predator protection? I have at least one old screen door hanging about, which I would probably use as my entrance, but I'd cover the screen with hardware cloth.
*Do we have an abbreviation for hardware cloth in use on these forums?

I have four chickens, and while I might someday get more, I sure don't want to have less than 4 anytime soon. I also have a Dh who is baffled by the time and effort I am putting into these birds. I'm happy to take extra measures to keep my birds safe and happy, but I would like it to at least *appear* that I am doing just what is sensible, and nothing extraneous.

I know I'm not answering all your questions, but I do have some opinions on some of the things you mentioned.

It depends on if you want a fort knox run or not.

I for one, don't want a fort knox run. I like bigger/cheaper! They are almost free ranging it is so big- but my fencing isn't that great against predators.

Some prefer to be able to relax while at work knowing that nothing short of a very determined dog or bear will get in!

If you want a fort knox run, then you need to consider that raccoons can (during the day) climb onto the roof of your run and chew through any plastic fencing, tear apart chicken wire with their hands, etc.

I personally prefer welded wire fencing over chicken wire (only 1/2 inch hardware cloth or smaller is predator proof as weasels and rats will make their way into larger than that).

Just my thoughts!!! I'm sure you will find the perfect solution!

Mine. PT 2x6 on the ground, everything else, plain 2x4. 5' 4x4 wire all around. 1/2" hardware cloth , 2' wide out 3' from each corner (where startled chicken tend to go) and alongside the ramp and under the ramp, between the sill of the coop and the ground. My ground is such it would have taken a backhoe to trench out for hardware cloth to a 2' depth around the fence, so I' ve got 2' of 1/2" hardware cloth on the ground, running to the outside and hog-ringed to the fence wire. Just scalped that 2' with a weed whacker, laid it down and let the grass come back up thru it. Electric wire all around, 6" from the top and the bottom (including along the bottom under the coop). Chicken wire over the top, supported by 3/4" PVC (ends in home-made, angled, dowel-like affairs set in the to 2x4s, sprung enough to give about an 8" rise in the center.

It takes some bracing (turnbuckles and wire have worked out best), but I manage to keep the gate swinging.

Given the predators we have we chose to do chainlink with hardware cloth with a 8" skirt the ground is hard , rock infested, tree root infested , it was just to hard to dig & bury. A simple netting on top , the other birds so far really don't like it but we don't lose food & no flying preds yet. Not a fan of chicken wire coons & others can tear right thru easily. When I go to work I don't worry about them in their run, on my days off they free range most of the day.
Good luck with your decision.

Here are a few pics I have showing our run fence. I am happy with its security and performance so far. 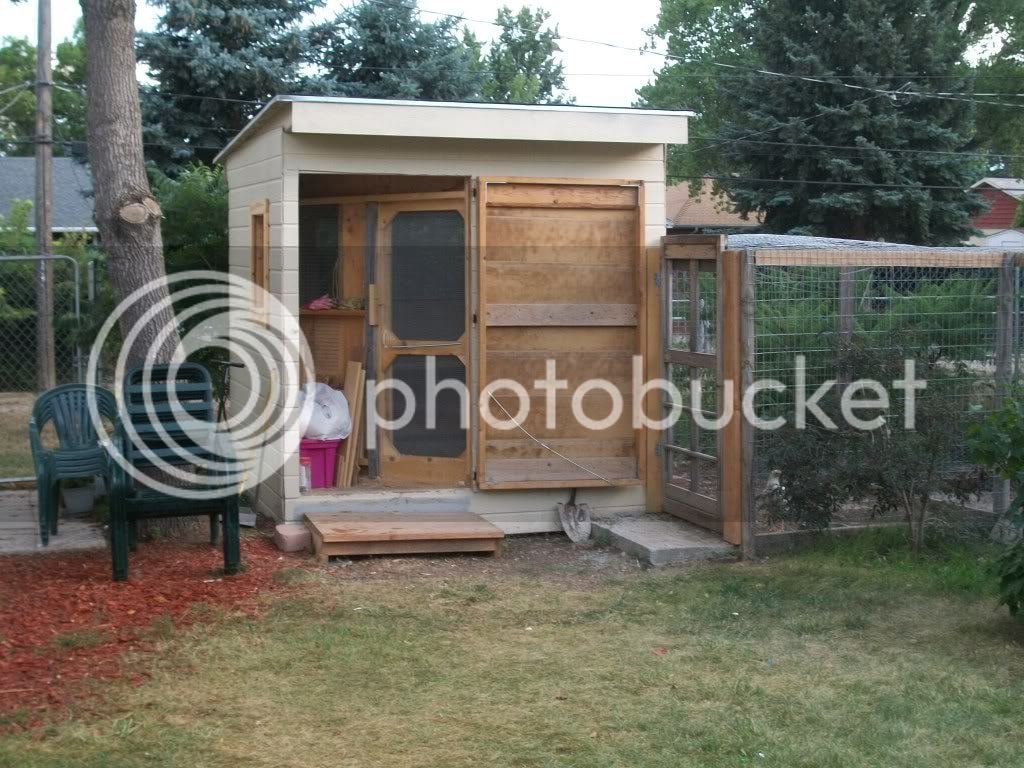 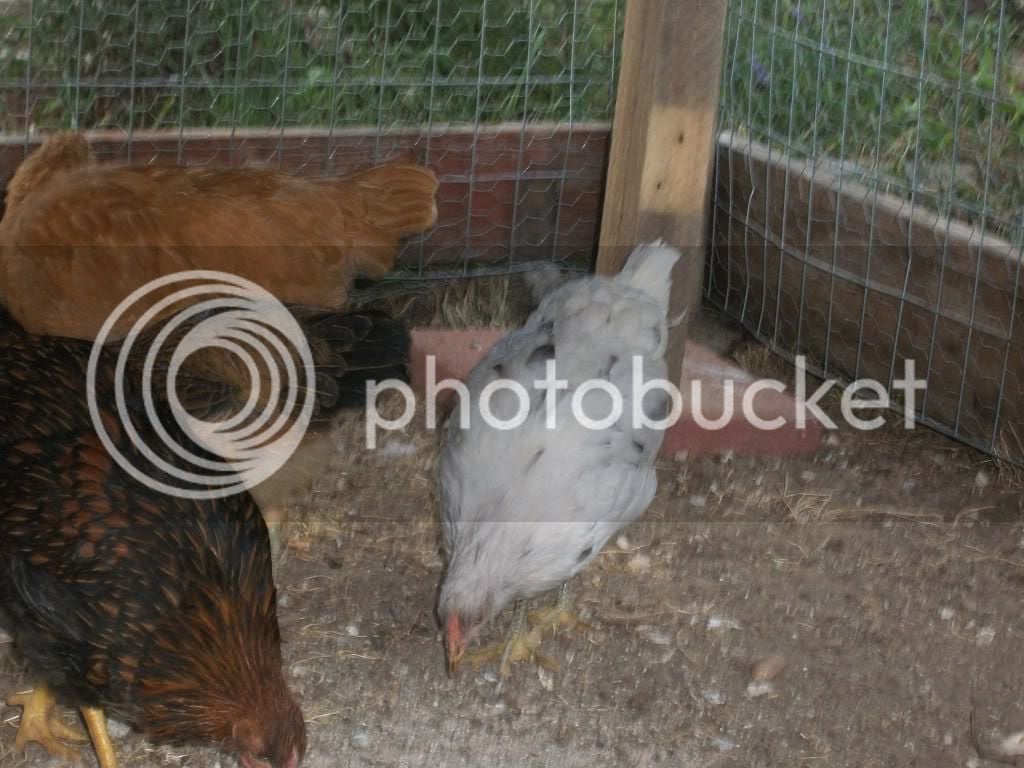 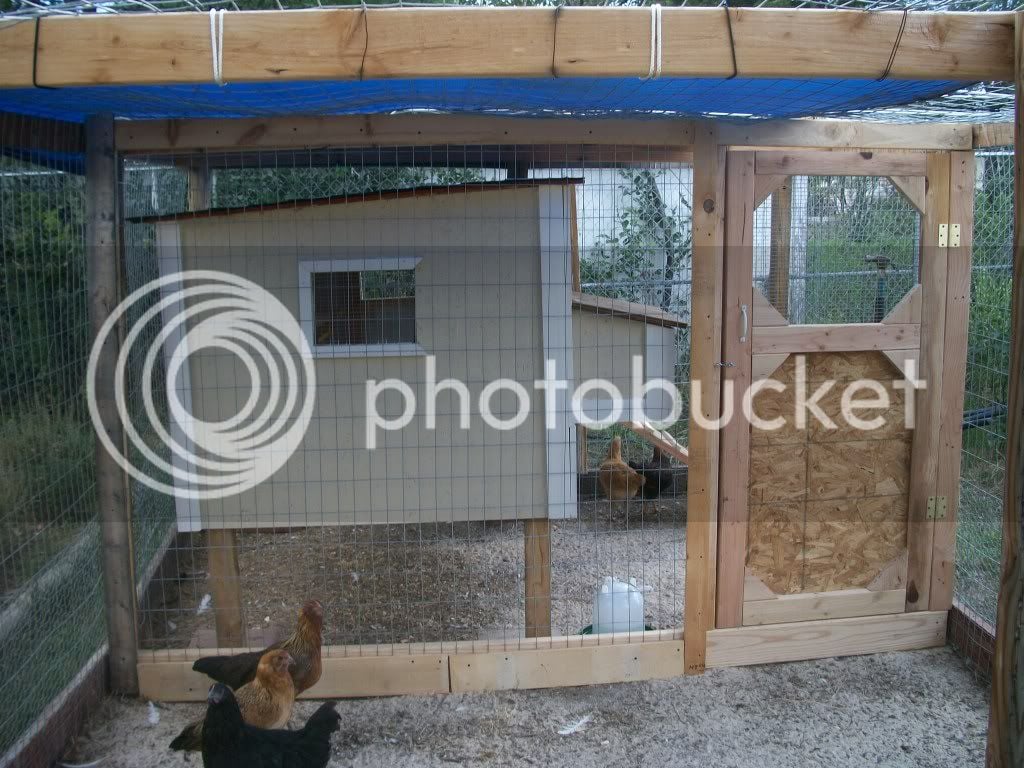 We used welded wire and chicken wire. We sandwiched the wire between the bottom external boards and the posts. We have chicken wire 2ft up and 12in out on the lower portion of all external sides. We had to separate some due to fighting and that fence does not have chicken wire. I think you can see it in one pic only. Our posts are pressure treated landscaping timbers that we salvaged and the framing is mostly 2x4 or larger. I used 2x10's around the bottom on the outside so no one can push their way in.
We topped it off with welded wire. (Pain in the tush to do, but worth the security IMO.)
Please do not ever let me become trapped in my run as I am surely not going to be able to bust my way out.

So grateful to you all--those who responded directly and those whose threads I've been reading. I'm getting some good ideas. I was awake in the wee smalls this morning making up my mind that I didn't want a run after all...or that it wouldn't work for various reasons...and plotting how to build a chicken tractor and how to convince the chickens to move from one to the other without undo bother. Only to wake up in the morning and do some more reading and decide once again that I do need a run.

How much space would you enclose for four chickens, keeping in mind chicken math, which I'm beginning to understand means I will soon be acquiring more chickens and may as well plan for it now?

What would you plant for them? The space is grassy and weedy now, with bare spots of exposed ground. No shade or bushes yet.

Well I am with other people who think fort knox is not a great thing. My hens free range during the day so they are open to all predators. We do have dogs so I am not worried that coons or oposums would come ion the yard when they are out. But when locked up they have a 12x7 fort knox run. We have 3 hens and this seems to small for me. I am in the process of just sinking posts and using 2x2 welded wire about 5 feet tall and fencing off a 40 x 15 area next to the coop. We have a 6 foot fence around the yard and so far the girls have not went over it fingers crossed

I think it alos depends on where you are at. We are in a urban setting but do have coons in a tree a few yards down.


As for posts I would use 4x4s and I plan to use 2x4s for the top and bottom also. For the wire welded wire all the way as regular chicken wire just will not cut it. If there is a predator problem I would bury the wire or have some type of skirting into the ground. Good luck with your project and I am sure it will turn out well.

I'm not crazy about Fort Knox. I mean, back when I was romantically ruminating on the possibility of chickens, I pictured them out in the yard, wandering at will. I do plan to give them such time. But I don't have a dog of my own and I know that foxes, possums, hawks, eagles, and raccoons have all been spotted in my yard. I also have two neighbors whose dogs are out unfenced and off-leash. (I don't mind, as we all benefit from each others' lack of fencing in some way, and the neighbors are usually on top of the situation, but I can't trust to it.) I can't bear to keep the chicks inside all day except when I can be out with them, so they have to have something.

Personally, I like a portable pen because I want them to spot-destroy my yard--the spots that are mostly weeds--so I can reseed. But DH really wants me to put up something permanent I can just turn them out into to simplify my routine. And I do have a small pen, ample for all four birds for now, but not as adults. I'll have to post a pic, as it is kind of funny-looking.

Well, I'm squarely in the Fort Knox camp. I know it is costing me a lot of money to put this thing up but once it is, I don't expect to have to spend one more penny on it or another run ever. This thing will stand for at least 100 years. The coop will fall apart sooner than the run. Considerations;

1. we have all kinds of predators, from bear to mountain lions, bobcat, foxes, owls, hawks, possums, raccoons, possibly weasels, probably rats. The whole gamut.
2. I wanted originally to have the free range but realized quickly that then I'd rather not have chickens because they would probably be all someones meal within a month.
3. I work all day and especially in the winter cannot free range them supervised. I also always wonder what good supervision is if there is a hawk attack, or a bear comes suntering by.

4. I also started to believe in chicken math

So what did I do?

1. Run is 24x30 ft and 6-8 ft high -- plenty of space for the 15 chickens that fit in my coop
2. frame is built out of 4x4, almost half of it is roofed with ondura panels, roof ridge are 2 2x8s bolted to the 4x4s in the middle of the run in order to accommodate snow load, rafters and purlins are 2x4
3. the sides are held together by more 2x8 and a 2x4 running along the outside, also bolted together through the 4x4s
4. all sides and the roof is covered with half inch hardware cloth, with 1x3 running over the seams. screws and washers every foot or so.
5. hardware cloth is about 18 inches out horizontally (apron) along the entire perimeter.

Did it cost a fortune? You bet! Will it buy me piece of mind -- most certainly. It will probably not withstand a determined bear attack but short of electric fencing nothing will, so I decided not to build with that in mind and retrofitting an electrified wire is easy enough to do should it be necessary.
Last edited: Sep 5, 2011

Quote:I agree--it's worth the peace of mind to me. Mine are beloved pets and I just won't take risks w/ their lives. No bears here (thank god!!) but plenty of other preds and I feel MUCH better having taken the time and spent the $$ to make it as predator-proof as possible.