How do you deal with MICE?!?!?!
So I wanted to ask this question and get some different opinions plus give my experience. I built my first large chicken coop this past summer. It is a rough lumber building and so their are cracks between every board, which makes for a real rustic looking, sturdy, and well ventilated coop. But I instantly got a really bad mice problem. I was trying to catch them in live traps to keep from having to put poison out (I have too many animals running around, but I was killing them after I caught them). But anytime I would go into my coop after dark, they would be EVERYWHERE!!!!! EEEEEKKKK!!!!

Very close to my coop is a large building that was getting over run with mice too (before the coop was built) Finally we got a cat and he runs them off/ eats them. But before he really started getting good at his job, they had found their was to my honey hole of food. I hang my feeders up, but they still enjoyed the bits that fell to the ground. I have a separate room in my coop so finally I purchase mice poison. It was the final straw. They gobbled up the first 3 packs I put out, so I bought more. That was 2 months ago or better. I only ever found a couple of dead mice and now my poison hasn't been touched for weeks. Either they have all died or its almost like a deterrent now, but no more mice running around at night.

I really didn't like using the poison until it got out of control, but now I'm glad I did. I will keep it out until I have to use that room again to raise some babies until they are big enough to put in with the big ones.

So what are/were your techniques to get rid or prevent rodent problems. (Feeding only what they will eat in one day isn't really feasible for me).

Thanks for your input in advance! there is an easy trap to make just use a 5 gallon bucket fill it with about six inches of water and sprinkle bird seed on top of the water. It will float and look like a solid bucket of grain. The mice will hop in but the water will be too deep for them to hop back out. and they will drown. Believe me you may have to set out several of these initially.

there is another version which is more complicated but works too. Same bucket same water but instead of the seed you skewer a Soda can through the bottom and top with a Marshmellow skewer. Then smear peanut butter on the coke can and fasten the skewer on top of the bucket so it doesnt fall off and can rotate. The mouse climbs along the skewer and tries to get on the can the whole thing flips over and the mous falls in the bucket.

Once you get your population down I suspect your cat will keep up with the rest.

I understand the use of poison. I dont fault anyone for using..... I just dont. I dont even use ant spray in the house. but if I had an overwhelming infestation I would take care of it any way that I could in order to bring the population under control.

Oh and I keep all my feed in Galvanized trash cans with lids. I am in the desert and ANY kind of food is a target for Kangaroo rats, mice, Squirrels, chipmunks, and then there are the deer and Rabbits..... I have Three species of rabbit. Jack rabbit, Cotton tail, and Bush Bunny. Any kind of garden has to be planted in a wire bottomed bed with wire to enclose it.

All feed & scratch & treats are kept in galvanized trash cans inside our chicken barn. I don't have any holes that mice can climb through - and if I ever see signs of them, I will set out traps in places that the chickens can't reach. My chicken barn has four fenced off areas - three pens (brooder, grow-out pen and layer pen) and then an area for only people. The trash cans of feed, etc. are in the people area. We also have a cat that keeps mice and other such creatures away from our house - and patrols around the chicken barn as well.

You really can't beat having a good mouser cat.

I use mouse traps baited with peanut butter (best bait I know of) placed under milk crates. The mice can get in but the girls can't. This method has been VERY effective for me.

My guineas kill them, so far they don't eat them though.

Keep the mice so the rats don't move in

No really, once I trapped and got rid of all the mice, rats moved on in and one tried to eat the crop off one of my slumbering girls. 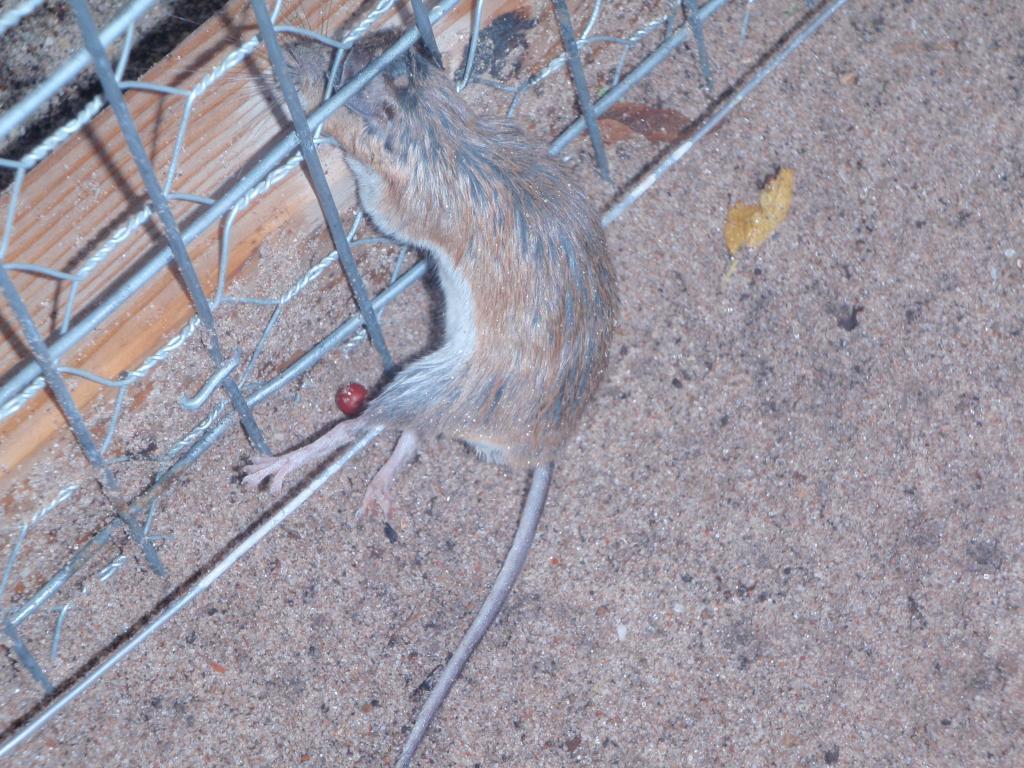 I'm in the EXACT SAME problem. So far I've seen three under the coop, my dog (German shepherd/ black lab mix, female, two year old mutt, sweet and fun in the house but outside she's a predators worst nightmare. Good ol' Senka Sue) killed one, (tore its head off and then tore its body in half, I watched her do it) so that's good. But two are still running around at night when I go to lock the girls up. And I know they are all from the same hole, and who knows how many more are in there???

Im curious to ask and please dont pounce on me for asking .....lol....nbut other than the mice eating the chicken feed is there another reason to get rid of the mice?
I used to have them and rats as pets so they dont really bother me nor would they if they get into my chickens run and coop unless they were hurting or infecting the chickens in some way of their diseases?
Do the mice go after the chickens and try to eat them or are they just in the food/pellets and its annoying to see them there?

Too many mice and rats

Mice in Run: A Creative Approach

Mice getting in coop and bedding