How to create ventilation without drafts

I am in the process of desigining a new coop. I know that there needs to be adequate ventilation, but not drafts. We currently have a chicken coop that seems to be ok in that department. I just thought I would get some input before designing the new one. What would be the best way to provide ventilation, without creating drafts? My coop is probably going to be apx 10ft long, 4ft deep and 5ft high. I have two standard hens, two bantam hens and a rooster that is in between sizes. I'm plan on adding 3 to 4 more hens come late spring-hence us needing a new coop.(I'm ordering chicks in a few weeks!!!!!!!!)Because the coop will be in a fully enclosed and secure run (top, bottom, and sides), I won't need to close the coop itself up at night.
Thanks!
Last edited: Mar 2, 2010

Check my construction page for details and pictures, but in a nutshell, what I found to be most effective are the punched aluminum soffett vents that you can buy at almost any hardware store or home center. 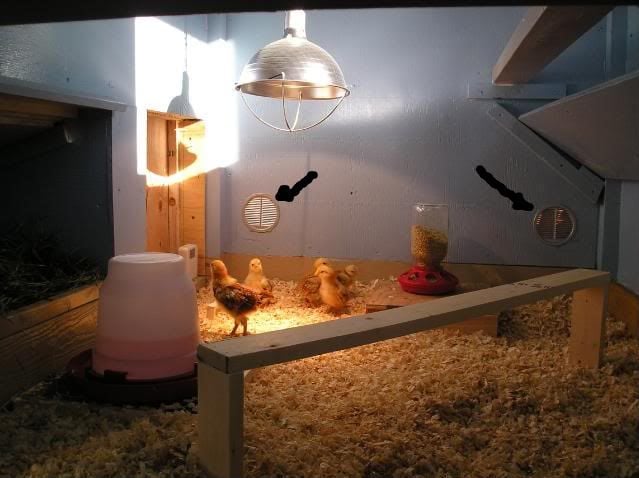 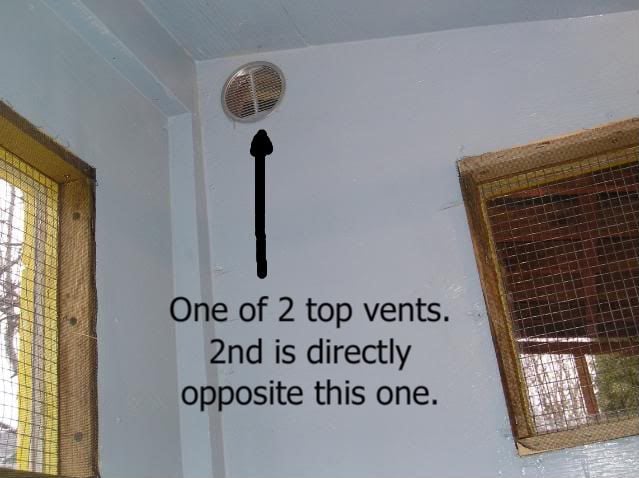 I used 4" diameter vents, one on each side of the wall, and glued them in place after using a hole saw to cut an appropriate hole. I put 2 vents down low, and two vents up high. They aren't adequate by themselves, but they do provide constant air turnover in my coop and will positively vent both moisture and gaseous ammonia, which are probably your two biggest concerns. In my climate, I am able to open at least one window daily, and in the summer it will stay open all the time so I do not have an accumulation of either; but if I close up the coop on a cold night I still have air turnover without being drafty.

A definitive answer depends upon your actual design, but just about any kind of screened and/or stamped foundation vent or soffett vent works very nicely. If your siding is plywood it is easy to find suitable screws to attach it soundly.

Again, it depends upon your individual coop design, and what actual materials you choose to use, but there is nothing wrong with using commonly sold building materials, such as foundation and soffett vents as long as you use them properly. In my coop, when I close it up at night and shut the door, it is closed tight, and those vents make sure there is fresh air at all times.

As I stated, these are not adequate by and of themselves, and they simply ensure that there is a positive turnover of air inside the coop at all times. By installing two vents down low, and another two vents of the same size up high, the heat in the coop that the chickens naturally release heats the air and it rises, and escaping out of the top vents while drawing fresh air in through the bottom vents. In this manner the air inside the coop is always refreshed, no matter how slightly, If necessary I suppose I can produce air flow anc air volume charts based on degree of temperature change, but I have satisfied myself that this system works and works well before I ever put my young chooks in it. I watch this system working every day.

I did a simple smoke test on this very installation with a couple of burning punks left over from the 4th of July, and with everything buttoned up tight and a 100 watt lightbulb in the brooder hood insidde, the lower vents were both sucking smoke and air in at the bottom and blowing it back out both top vents; using nothing other than natural convection currents inside the coop.

Chickens produce a lot of heat, and heated air rises. If you let in cooler air in underneath it, the air will slowly turn over while the coop is otherwise closed up tightly. Ammonia boils off at a low temperature so it is important to give it a way out of the coop.

Positive and constant air flow will accomplish that, and using these types of soffett vents work very will for me, and in my coop. I installed them carefully and securely. My chooks are in that coop right now, they are secure and the air inside is clean. It smells like chickens, and not chicken sewage, and that is the goal.
Last edited: Mar 3, 2010

The problem with those happy little soffit and foundation vents is that they are too dang SMALL, unless you have a very low chicken population for the size of your coop. A 4" diameter circle is only about 12 square inches, i.e. one-twelfth of a square foot, and that's before you subtract out the amount that is obstructed by all those louvers. Even foundation vents are still pretty small.

Chickens produce really a WHOLE LOT of moisture and ammonia; from the moisture you get frostbite despite barely-freezing temperatures, adn from both you get susceptibility to respiratory diseases. It is really important to have good air exchange, and little holes like that are just not going to cut it for most situations unless you have a foolishly vast number of them. I can't comment on your particular design, Cheiftain, having not seen it and not knowing how many chickens you'll have or whether you'll use droppings boards cleaned every morning, but if you are relying on those thingies there is a pretty fair chance that you will change your tune once you actually get chickens and have had them living there for a while and SEE what they do

(e.t.a. - Chieftain, despite your considerable edits to your post, I still stand by my statement that you may find that things work a lot differently once you have had chickens for more than a couple weeks than you think they will in theory... and low vents are BY NO MEANS needed or necessarily desirable in cold weather)

Yomama, I don't know if you've seen my ventilation page (link in .sig below)? While it is not realistic to expect to predict exactly how much ventilation any given coop is going to need, a rule of thumb that is very unlikely to fail you is to build somewhere like 1 sq ft per bird, or failing that at least 10 sq ft of coop. (This is only for air-quality purposes -- in many places you need more than that to shed summer heat, as well). The vents you will be using in the wintertime need to be located somewhere they won't bother the birds on the roost -- if your 10' long coop is just the enclosed house portion, with extra run, that's actually a really good situation because you can place a bunch of vent area on the downwind side of the end of the coop furthest from the roost.

For good wintertime ventilation (that's the season when drafts are a problem), put your vents high up on the walls, ideally tucked up below a roof overhang for some protection. You do NOT need low-down vents, air will go through just the high ones perfectly fine assuming they are adequate size. I would suggest building them LARGE -- it is easy to close them down partway if necessary, whereas having to traipse out there to cut new holes in the coop in January b/c your chickens are getting frostbite is not a good situation.

If the vents are far from the roost, high up, protected by a roof overhang, located so you have ample vent area on the downwind sides even when the upwind vents are closed, and have flaps or sliders so you can adjustably close them down, you will not have problems with drafts. In a very windy area where there is no 'downwind' side of the coop sometimes, you can build a sort of hood or baffle to decrease windspeed coming through the vent, but this is seldom needed and not without its down-sides.

You've gotten some good advice here, but I still recommend doing a search (in the blue bar above) - you will be reading FOR DAYS. Lots and lots of good information on this site.

Quote:
Citychook, I love your tag line. My friends think the same thing and then in the next breath they say "those are the luckiest chickens in the world and can I have a dozen eggs?"

May 15, 2022
Kidwantschickens
K
U
How to provide adequate ventilation without getting coop wet?
2