I don't think he has a neck!

Look at this chicken, I'm not sure if it's a Cornish Rock or Cornish Cross whatever (can you tell I'm new) but I don't think the thing has a neck. He walks all hunched over. He don't look like the other ones. When he drinks his head is still right there in that position. It's really wierd. 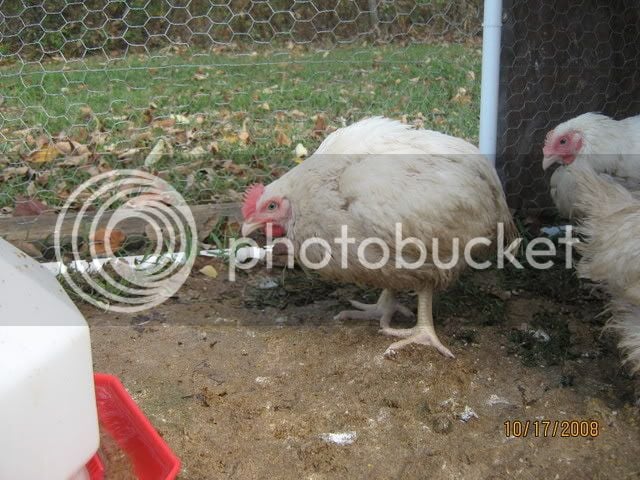 Oh WOW! I have had cornish X's before but they always moved their heads in diffrent positions. Did you feel for it yet?

Quote:No, should I? I'm not doing the processing so I really wasn't that concerned. I just thought he looked wierd.

May be a type of deformity that is cause by a silent disease.

A fellow at our church raises cows. O.K. Well one of his cows gave birth. Well the calf has 1/2 a nose. So that tells the owner that somewhere down the line something bad happened.

He can't sell the calf for meat or anything. He can have it killed but, why? He says he will let it live out its days, but he also said he wouldn't eat it, cause he knows something just isn't right.

That's why it was said that something is wrong. Not saying it is an unhealthy bird but, just saying, if the bird doesn't have a neck, there's gotta be something wrong.

In nature these are the animals that will get taken by predators first. If the problem is a genetic abmormality and not a disease then why should they not be eaten?
You must log in or register to reply here.
Share:
Reddit Pinterest Tumblr WhatsApp Email Link