I suppose this could fit into Managing Your Flock, but it is more about me being upset that my favorite chicken is upset, than really flock management.

I am sorting out everyone into different coops to figure out who stays and who goes. I am using the Brooder Coop to put the "for sale" chickens in, and one of the chickens who has lived there her whole life (she is about 7 months old) is my bantam mutt BabyMama. 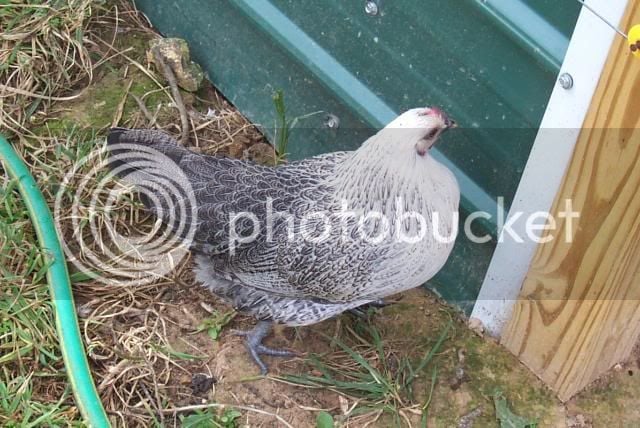 she is so sweet. She is at least 3/4 game hen, and she is very motherly and chattery. Strangely enough, she is also the sweetest chicken on the farm - she loves to be picked up and held and will even jump into my arms and chatter at me. Her mother, in contrast, is a spastic freak who screams if you get too close to her - or if you look like you might get too close to her.

So, anyway, tonight I began the "sorting" process, and BabyMama had to go into a new coop. She was not pleased and she jumped onto my arm and chattered and begged to go back to her own coop, and I felt like such a rotten meany

) then I shut off the lights to calm her down. She misses "her babies" (most of whom are gone already, but she has a good 20 of them left in there) and she wants her own perch in her own coop.

Tomorrow is going to be worse, because not only do I have her in a different coop, she is going to have to stay in tomorrow (and for a few days) because I plan to worm them, and they'll just go drink out of the duck pools if I don't lock them in. They have large runs, but it just isn't the same as free ranging.

I feel so guilty, and so mean. I'm tempted to bring her in the house with me

so she won't have to be in the strange coop. Yeah, hubby would go for that... not.

She'll get over it. Eventually.

Well, you know Meri, 'The Chicken Formerly Known As Dumpling' lived in your house for a while, maybe he'd be okay with it?

I wish my little girl would let me hold her, she just tries to 'land' on me when I have food!

I doubt he would enjoy her conversational chatter.

BabyMama never really used to pay much attention to me, until I gave her all those babies to play with. Then she became my best buddy

I'l probably give her the ones in the incubator when they hatch, Maybe that'll make it up to her.

Quote:
yes, but will I get over it?

I must ask, how did you get up the will to do it?

And btw- it's done. Be happy you don't have to do it again!

Poor baby! I'd feel like a meany too. Get her a new chick, then all will be well.

She is a real beauty.

I've got an OEGB named Skittles, and she has got to be the sweetest little thing. Just like you described yours. I hope she settles for you. Poor little girl.

I know how you feel. I have a pretty white crested blue roo I want to cross with an assortment of hens. I picked out the girls and put them in a nice area with their own coop. Some of them were not happy! I picked them up, cuddled them and told them "It will be like camp, you'll have fun, you'll make new friends". Didn't seem to help.

Yes, Mojo you know when she is on the couch at the Chicken Shrink, she is going to be chattering away about how it all started when you made her move into a new home and took away her babies and her perch!! What we do to our babies!!!!!