Is it okay to feed pullets yogurt?

I've heard that yogurt is good for laying hens because of the extra calcium. They haven't started to lay yet. Would it be an issue of I gave my chickens yogurt? I think they are about 19wks.

Also, I only have Dannon vanilla flavor. I don't buy the low fat Dannon because it has aspartame in it. (I figure if it is toxic to humans it won't be too good for chickens). I checked the ingredients and it lists: Milk, Sugar, Vanilla, Pectin.

My second question is would it be okay to give them a little even though it has sugar? I just want to see if they like it so I don't wind up blowing money on plain yogurt just for them - ha.

Yes, they can have it. From an early age in fact.

The plain yogurt would be better for them though. Sugar is better than artificial sweeteners, but it's still not all that good for them (or us).
Last edited: May 30, 2011

I've given mine some with fruit in it (no added sugar) and it was a lot of fun to watch them eat it. Most of them didn't "get" it at first, so I had to put some in my hand and on my finger. When they finally figured it out - it was a yogurt explosion! There was yogurt everywhere and pullets freaking out trying to peck every last speck that flew about - including what stuck to one another's heads and bodies.

I love watching them try out new treats. You should totally try the yogurt out - it was great!

Welcome to the forum

I had some tzatziki (a Greek dip of plain yogurt with chopped cucumber, chopped onion and cumin) which I wanted to get rid of, so I put it in the chicken coop. They dove in like they were starving and now they're dancing to "Never on Sunday" and smashing their plates on the floor. Next we'll try them on Avgolemono soup! Yes, chickens like yogurt.

Thats good to know that they can have it at an early age.

I put a little yogurt in a dish and brought it out there. When I called them and set the bowl down they just looked at it.

I realized the bowl is the same color as the yogurt so I added a little of their feed and... they just looked at it. ha. THEN, I put some on my finger and they went crazy! One of the chickens liked it so much it was trying to grab my whole finger! Ouch.

After I set the bowl back down thinking they'd get the idea there was food in there you can guess what they did... looked at it and then started following me.

I assume they will get the idea to eat out of the bowl. But we all know what assuming does...

Did your chickens catch on to eating out of a bowl easily?

I'd say it's alright, I gave to my chicks when they were 3 days old, and I give to them now @ 6 1/2 weeks! Cept I gave them Yoplait strawberry w/o the chunks.

Quote:
They will catch on. I started mine out with yogurt using something small and flat like a salsa lid and held it out to them to peck at. I might have even tapped my finger in it to get them to peck at it... Once they make the connection the color of the container won't matter. I actually have to hold a yogurt dish out to them and let them begin to eat while it's still in the air before putting it down. Otherwise they are trying to compete for it and then there's a foot in the yogurt or they flip the bowl over, etc.

Best to only feed plain, live culture yogurt, no sugar, no artificial sweeteners. What you're feeding it for is not really the calcium so much as the beneficial bacteria for their gut.

I just tried this today with my 9 week olds! I put some dry oatmeal over it to trick the scaredy chickens but they let it sit for an hour or so.... Came back to check later and it was all gone! It takes them forever to decide to be a little adventurous!

My Buff Orpington's LOVE yogurt. It is their FAVORITE treat. Mine get rolled oats and coarsely ground flax seed in
theirs. It's good for their digestive system, and helps to harden their poop.


Here a picture of my baby Madeline feeding them their special treat.
I just love their fuzzy butts 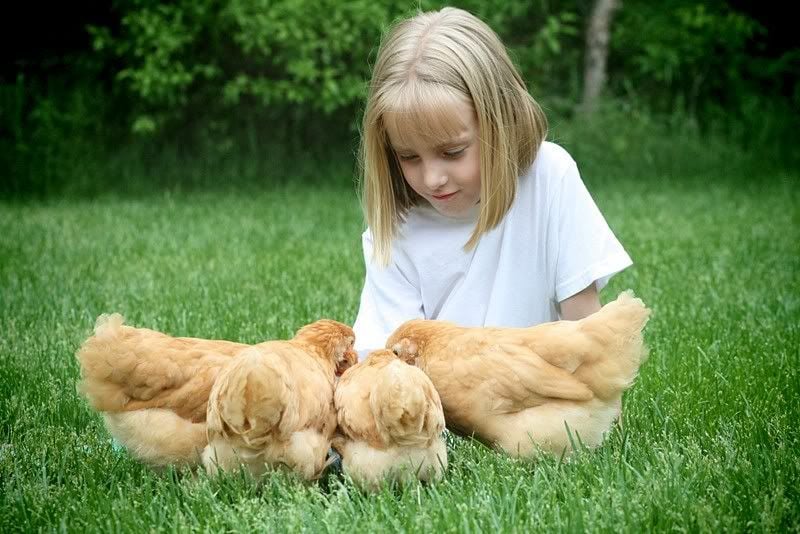 They get so excited each day when this little yellow "tea party" bowl comes out... 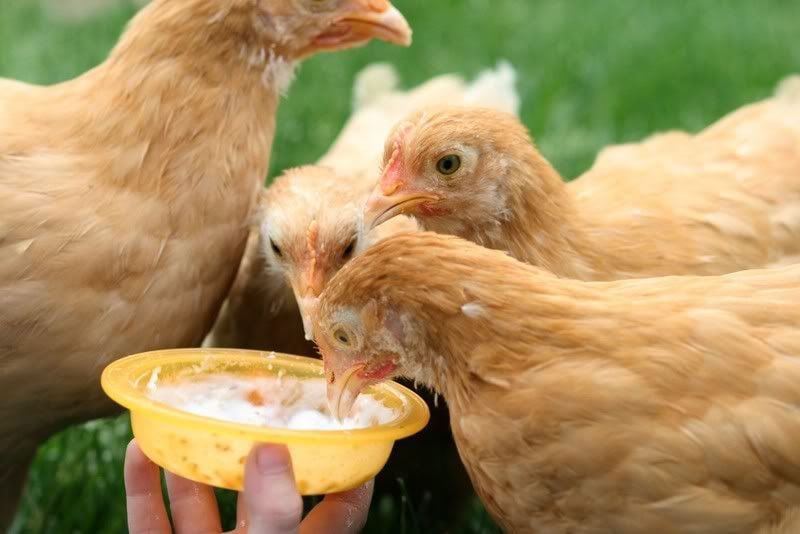 My girls and I take turns feeding them this snack. It makes them so happy. 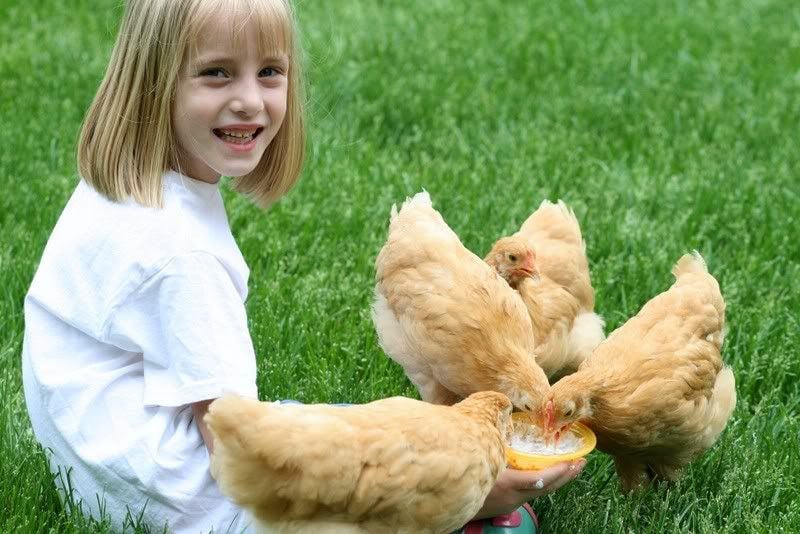 Making your own chicken feed| I have questions