Is my Buff Laced Polish a pullet or a cockerel?

Can't have a rooster in NYC

What do you guys think of this one? It's a bearded Polish, so can't see if it has a wattle. My aunt thinks it's also a male, because of how it hold the tail so high, just like Buffy, but that could just be a Polish chicken thing. I'm hoping it's a female, but I guess I won't know until it either crows or lays an egg. 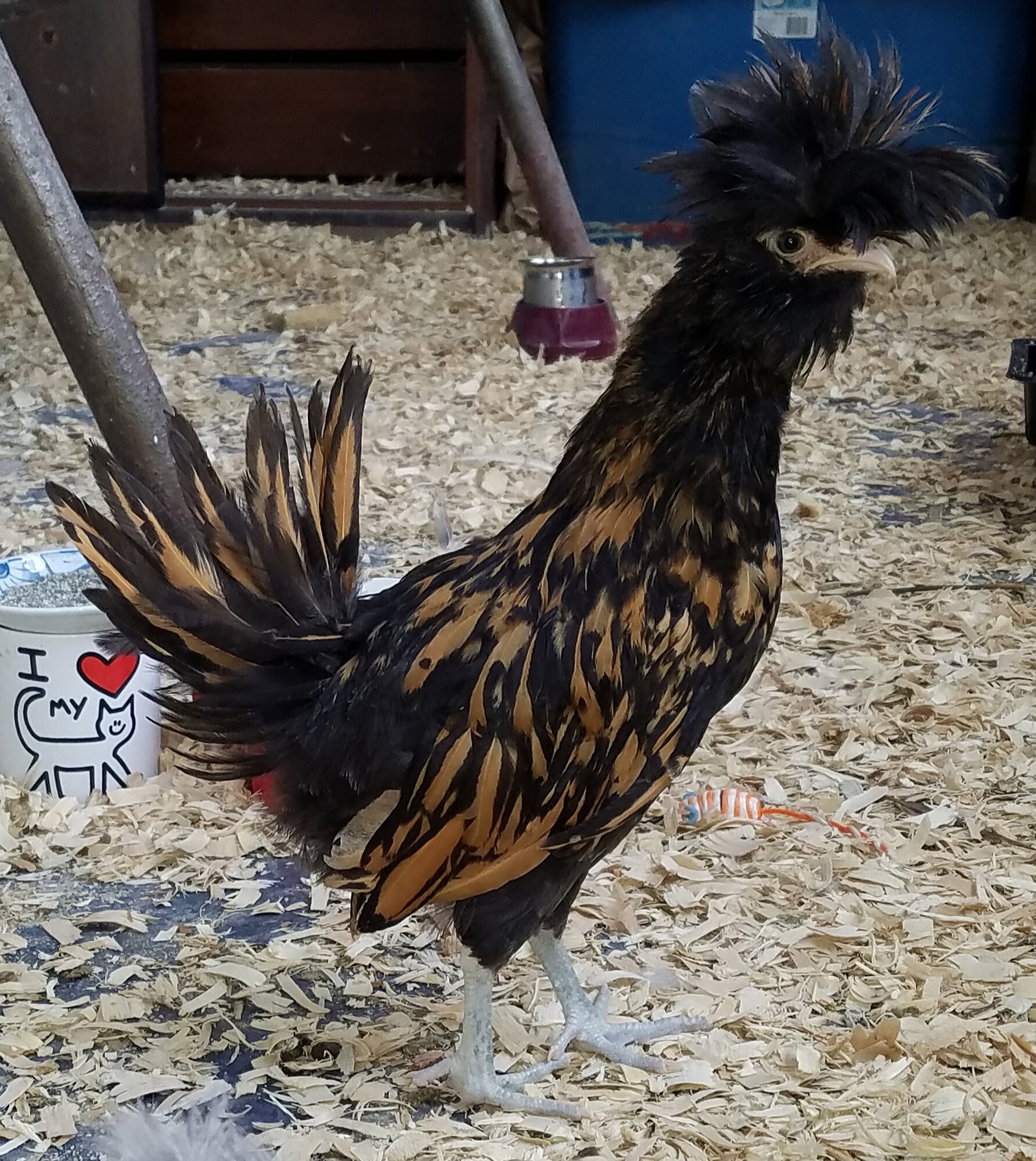 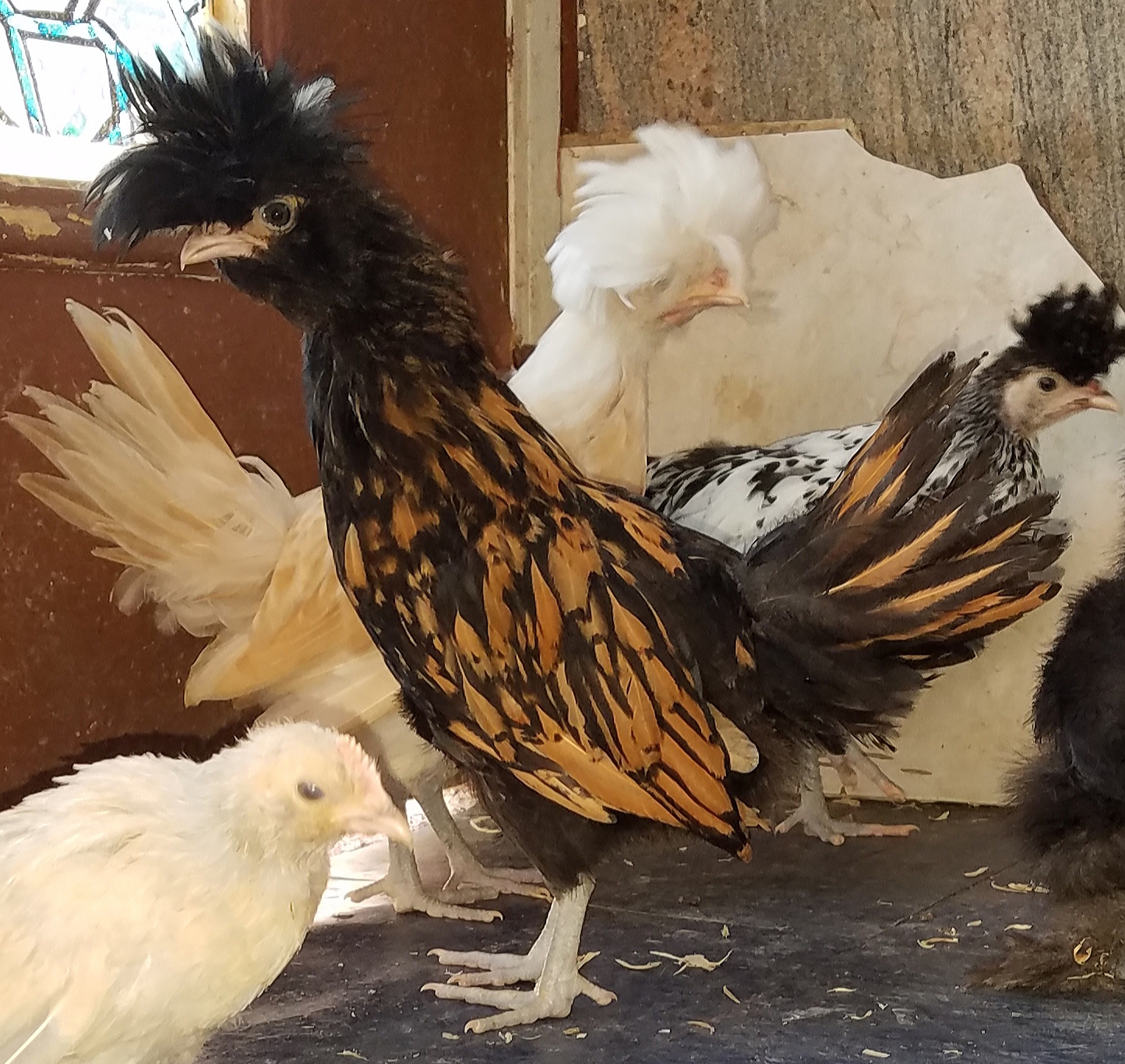 Sorry, this one looks like a boy as well.

black_cat said:
The usual options are:
-Keep. If it's legal, and if you want to deal with one, and if you have enough hens.
-Rehome. To a farm, someone on BYC, facebook, etc.
-Rehome with the probability of him going to the stewpot. If you put him on Craigslist for cheap someone might buy him and butcher him.
-Butcher, or have someone else butcher for you. For most people, this is either the first or last resort.
Click to expand...

One additional re-home option: advertise him on Poultry Show Central (poultryshowcentral.com), which is free, and you can note your location. Most folks looking at this site are poultry people, and they are usually not looking for dinner. You might even be able to trade for a pullet. I would trade, if I were close enough. (I am in Missouri.) He's a cutie! And I have several buff laced Polish hens to choose from.

Another "keep" option is a crow collar. I haven't done that but if you were planning to keep him for breeding it might help.

I'm no good at polish

Buffy was pretty obvious, but I have no clue on the other one, that's a wild crest... But no apparent wattles?

Actually, the bearded types don't often have large wattles, so it's difficult to tell from that alone.

I have a young bearded buff-laced Polish cockerel hatched June 26 and raised by a buff Orpington hen. (Polish aren't generally setters, so I use some other setters to raise them.). You'll see in the photo the crazy crest, the spur starts, and the hackle feathers are giving him away....but the real give-away is the cute baby-crowing! 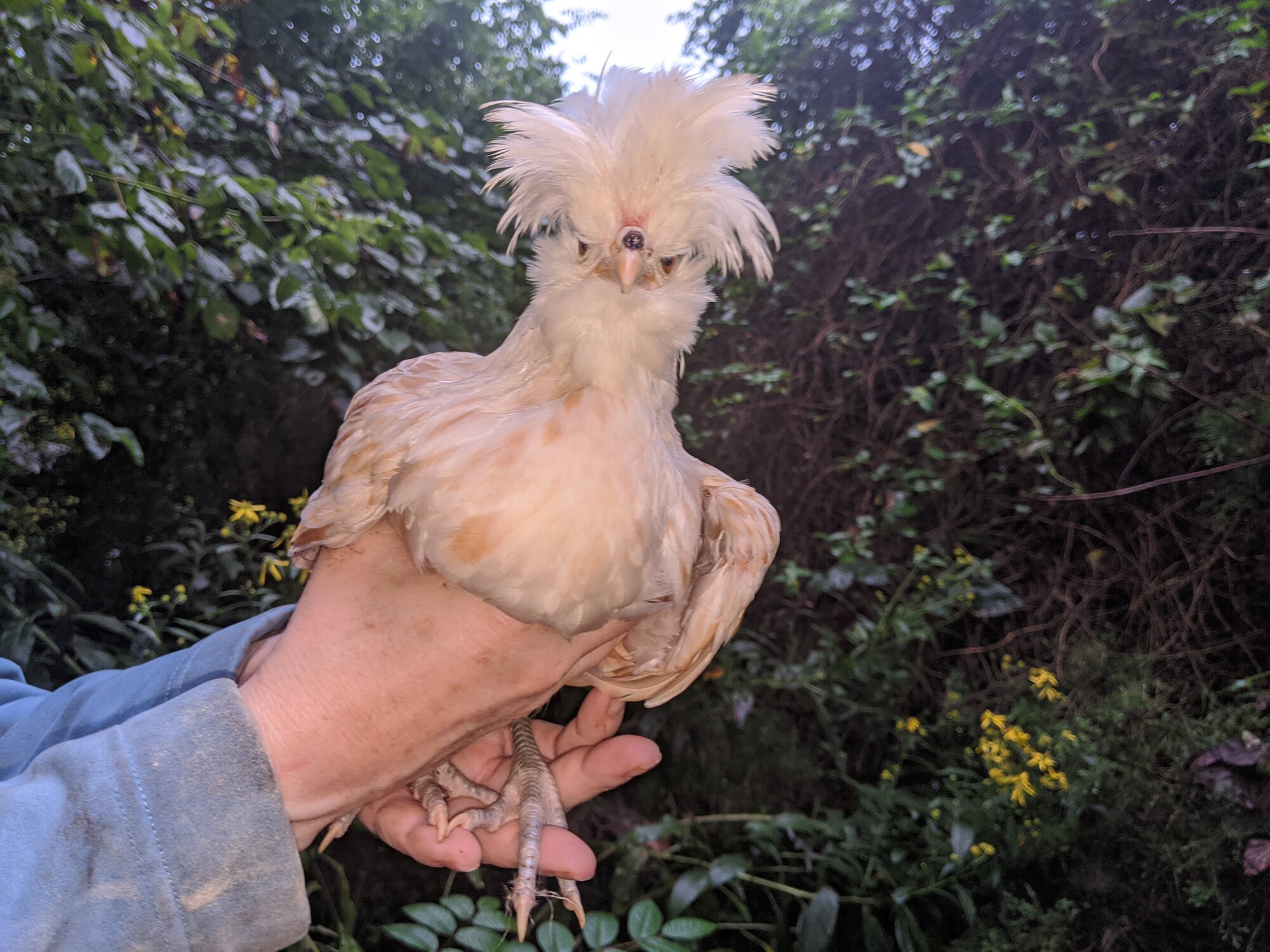 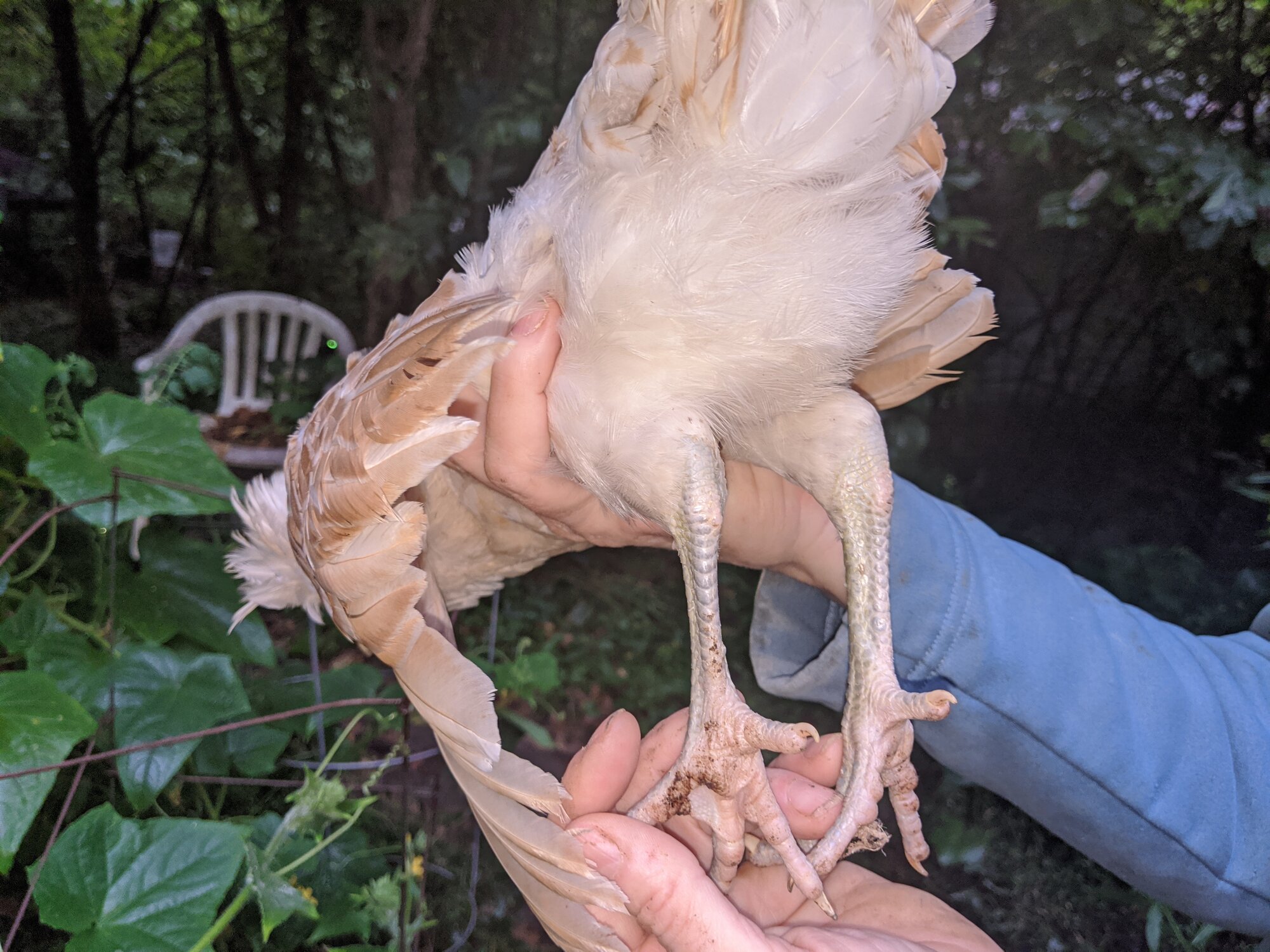 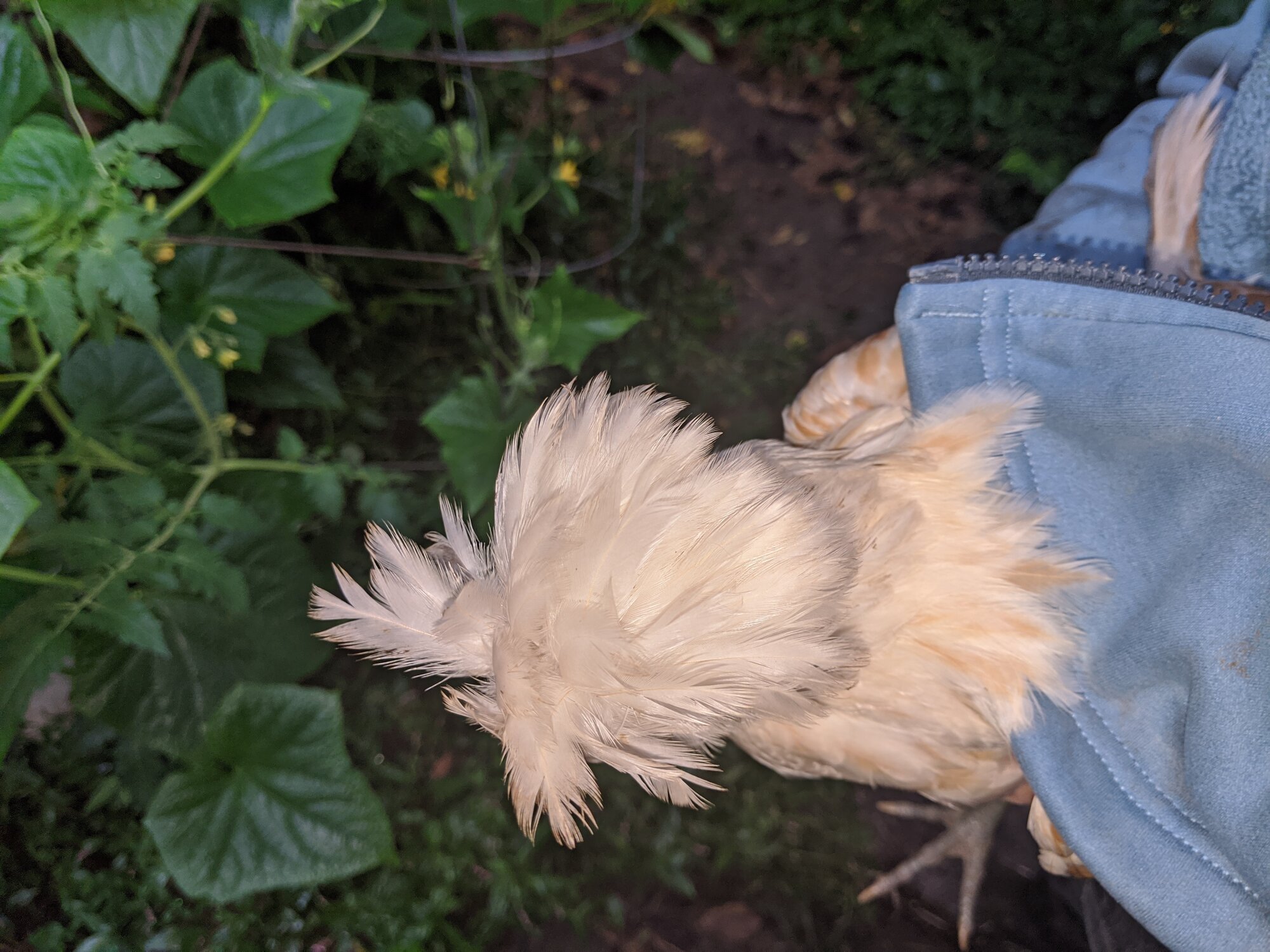 His dad had no problem recognizing him as a boy, even if he didn't recognize he was his son. Dad started warning him off!

He was raised in the barn, so his wattles and comb are more pink than red. 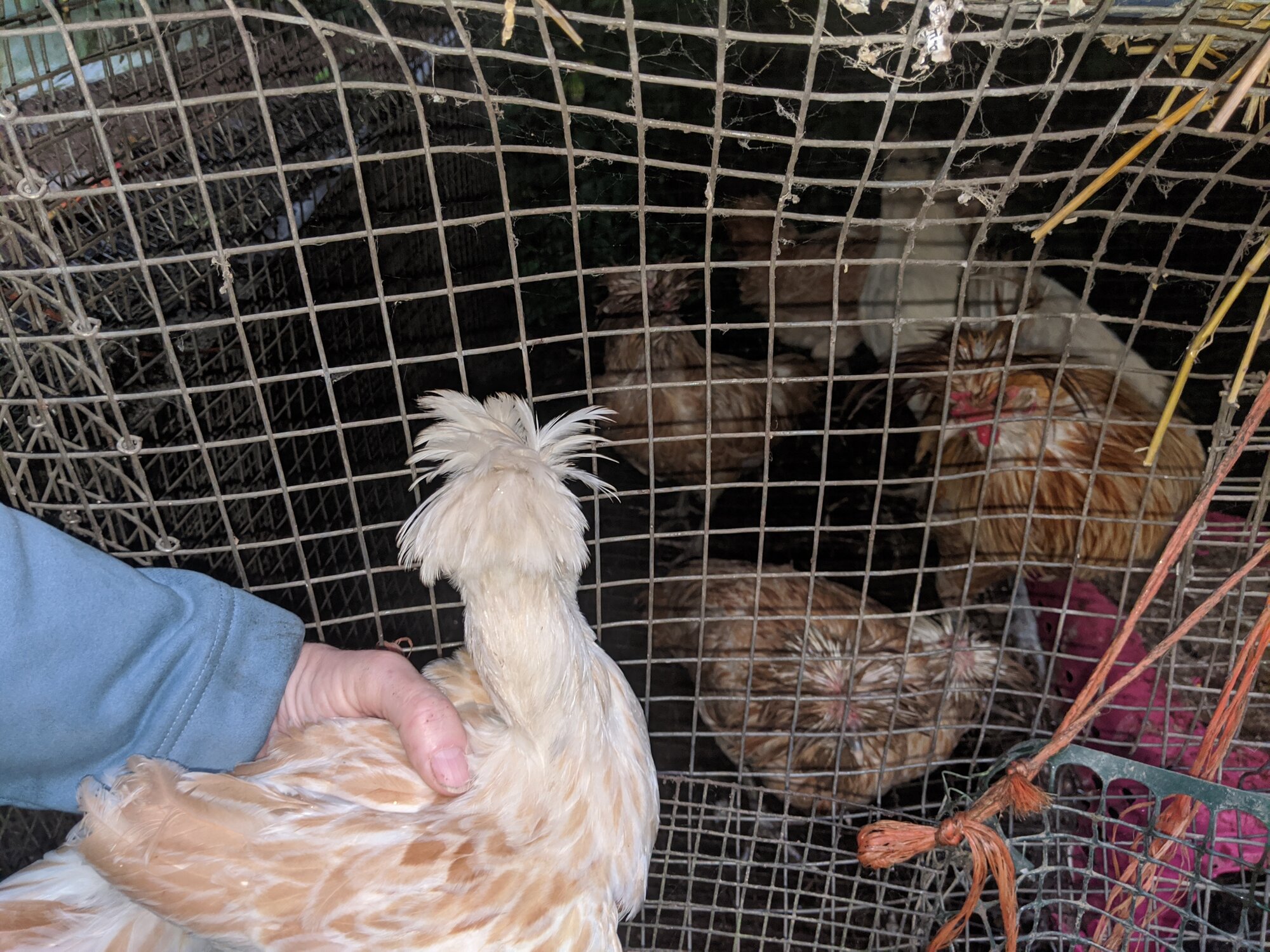 BTW, notice the little scab on his nose, and the scratch on his beak. He's following his foster mom's foraging example, and they are always reaching for things outside the wire pen! 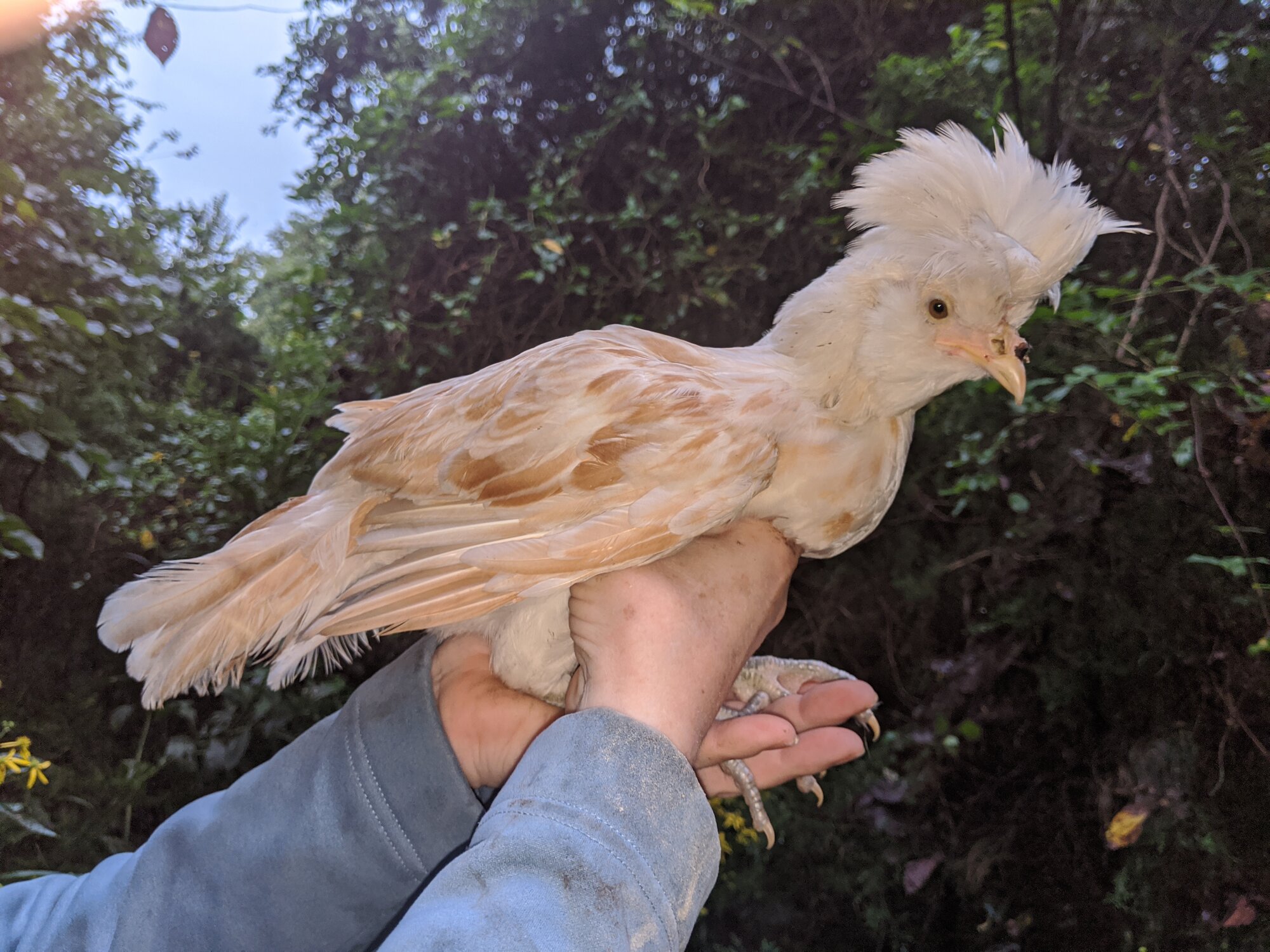 In my experience this is typical in crested breeds, but it doesn't bother them enough to stop doing it.
Last edited: Sep 1, 2020

Actually, Bowie turned out to be male. Here he is at 7 3/4 months old. Out of the 7 "pullets" sold to me by Long Island woman, only 1 is female. I kept Bowie and my little d'Uccle, Chickpea, and rehomed 4 (Bowie's brother Jagger, a Polish, and 3 Silkies, which were bullying Chickpea), and I bought 6 4-month old pullets from a woman (that turned out to be a chicken hoarder) in Connecticut, and 1 got sick and sadly had to be put down, so now I have 2 cockerels and 6 pullets. I'm getting more in June, their coop can hold about 15 full size. I want some bantams, so setting up a smaller coop for them. 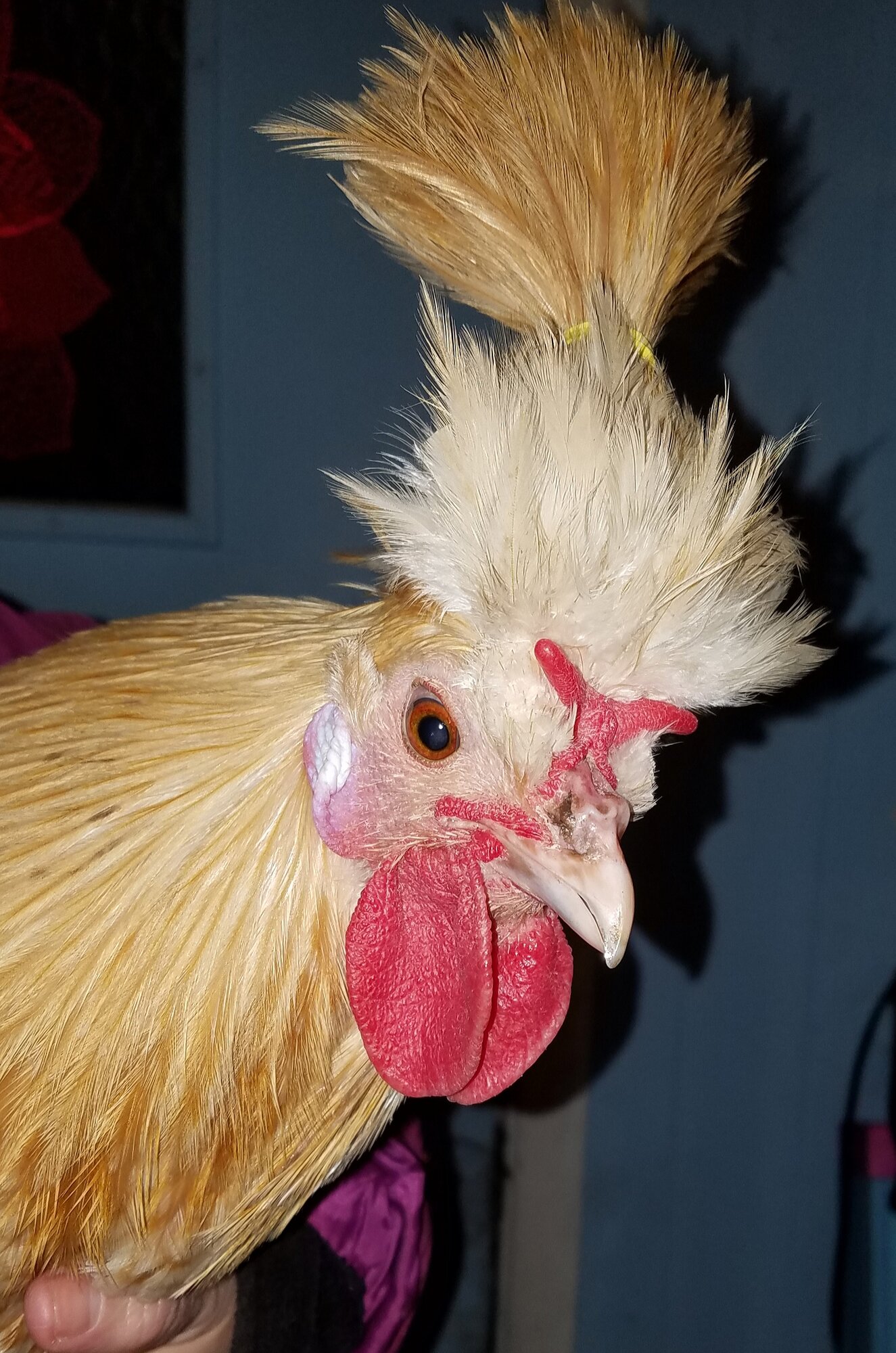 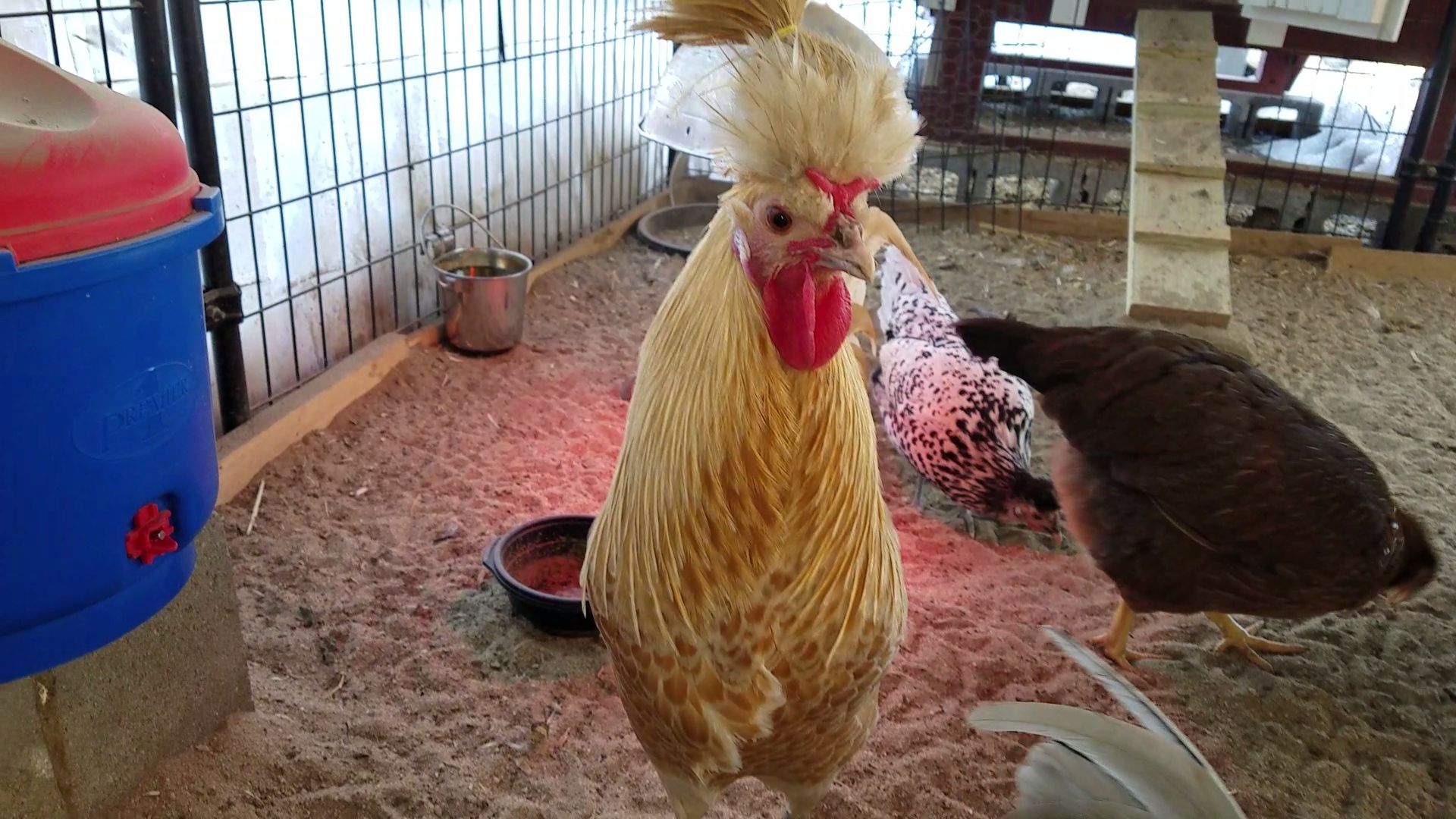 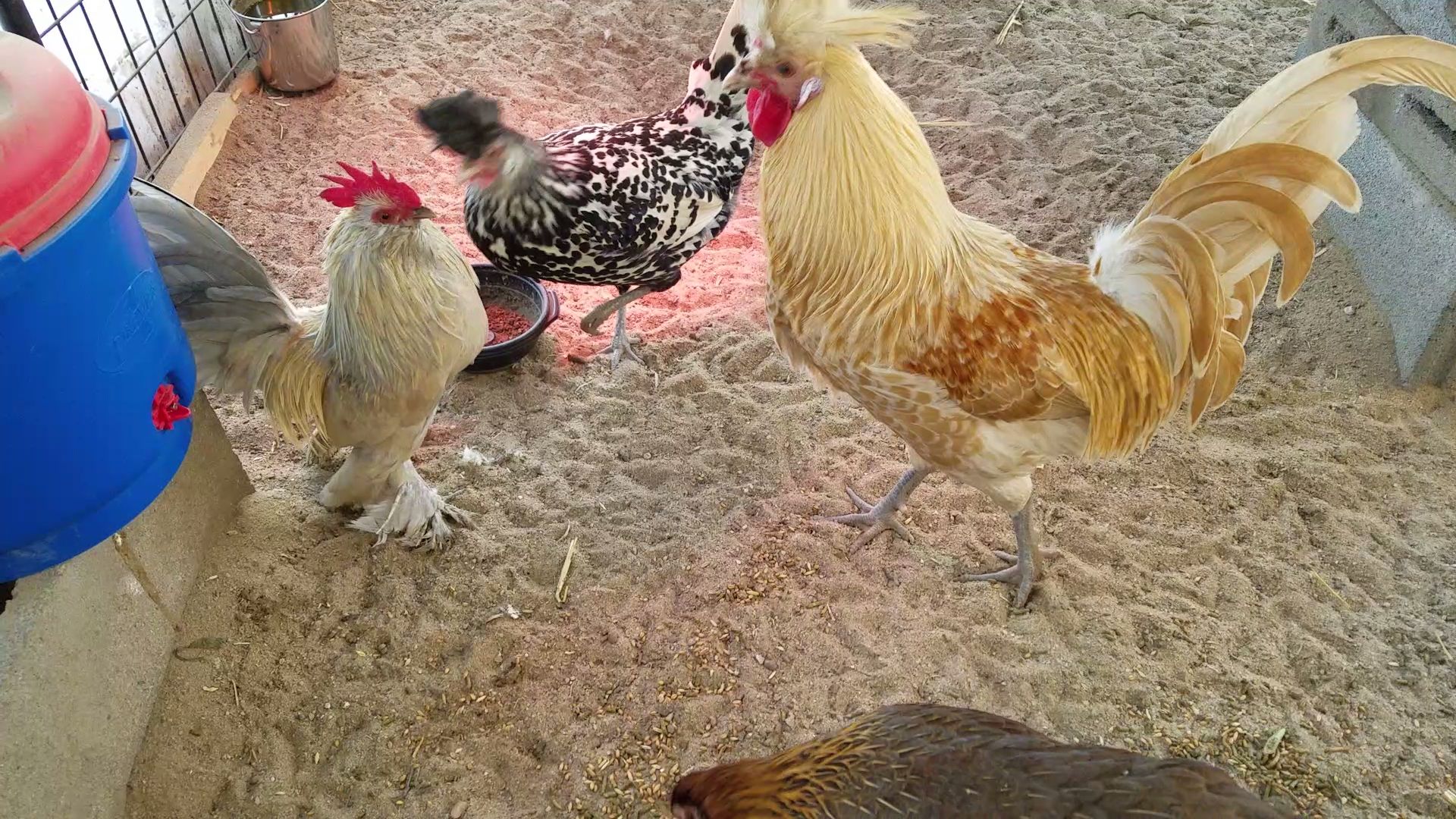 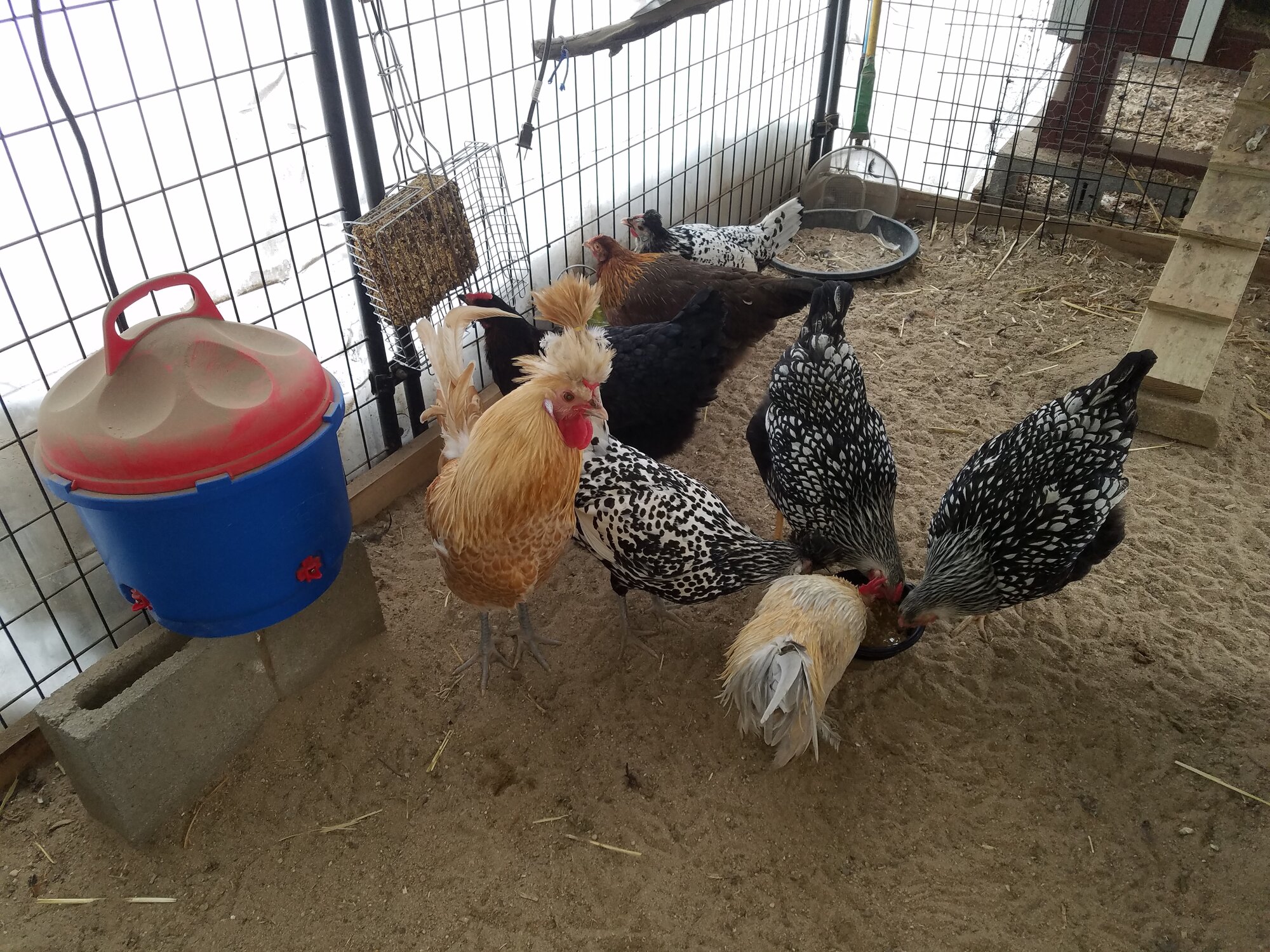 When do Polish get their wattles?