On Friday...my goat Stormy..was talking up a storm! I thought she was either going to deliver, or was reacting to the new goats that we got the night before that were in her previous pasture. I had to run out, so I told my hubby to watch her closely and text if something happened. He texted me that she was fine and to take my time. I even stopped to get hay. When I got home I said I was going to change and go out to check on her. Chris headed to the barn. He called me immediately..and said..Busty’s in labor! Our other pregnant goat! I thought she had two more days. So, I ran out. Her water sac was out and she was struggling. After awhile..it broke! Then..labor stalled. I called the vet righ5 away but it was voice. After half hour, I said we had to go in. I tried first...but I couldn’t pull, because I didn’t feel a head and I was scared. Chris went in. He felt three hooves...he had to decide which two to pull..we were sooo scared! He pulled and the kid came out breach! We toweled him and quickly started plunging gunk from his mouth...success!! He was ok!! We whooped with joy! It was the best feeling!! He was grey and black...tiny. We got him a little toweled and the next one started coming out...it was fast! This one was easy. But big!! Another grey and black! Success! They both have big white spots on there heads...so cute, and floppy ears..that will straighten out with time. We thought we were done and were focused on getting them warmed up. But..nope..here came a third!! She was rolling out just as fast! This one is brown..a mirror image of momma and has stolen my heart...probably because she does look so much like a Busty, who is such a sweet goat. Triplets..we couldn’t have been happier.

we we’re working furiously to warm them up..it’s only about 20* here, and they could get hypothermia and die so quick. But Stormy is making more noise by now, so, I went to check on her...sure enough..she’s in labor! Holy smokes! Double dose! We ran over and she had the kid fast...no trouble...and cute black and grey tiny ball of fur. We thought she was done. She’s a Pygmy and this was her first freshening. Nope..her came a twin! Another black and grey white a white spot on the head! The buck for both girls was completely brown...a little white...but no black. Where was all the black from people? Stormy is black, but we were just laughing. Too cute! We were drying them fast. We blew them dry with the blow dryer. We spent hours with them..just marveling over the glory..and making sure they could find the nipple...Busty was plugged. The kids couldn’t find the nipples at all. And, they didn’t seem to drink much...but, no one was crying..so, that’s supposed to be a good sign.
the second day we had a little scar with my brown kid..she had scours...true diarrhea...the runny stuff down the legs..but we helped her out, and she it doing better. They are just amazing. Sooo small...doing great. Smallest is 3lbs...biggest is 6. 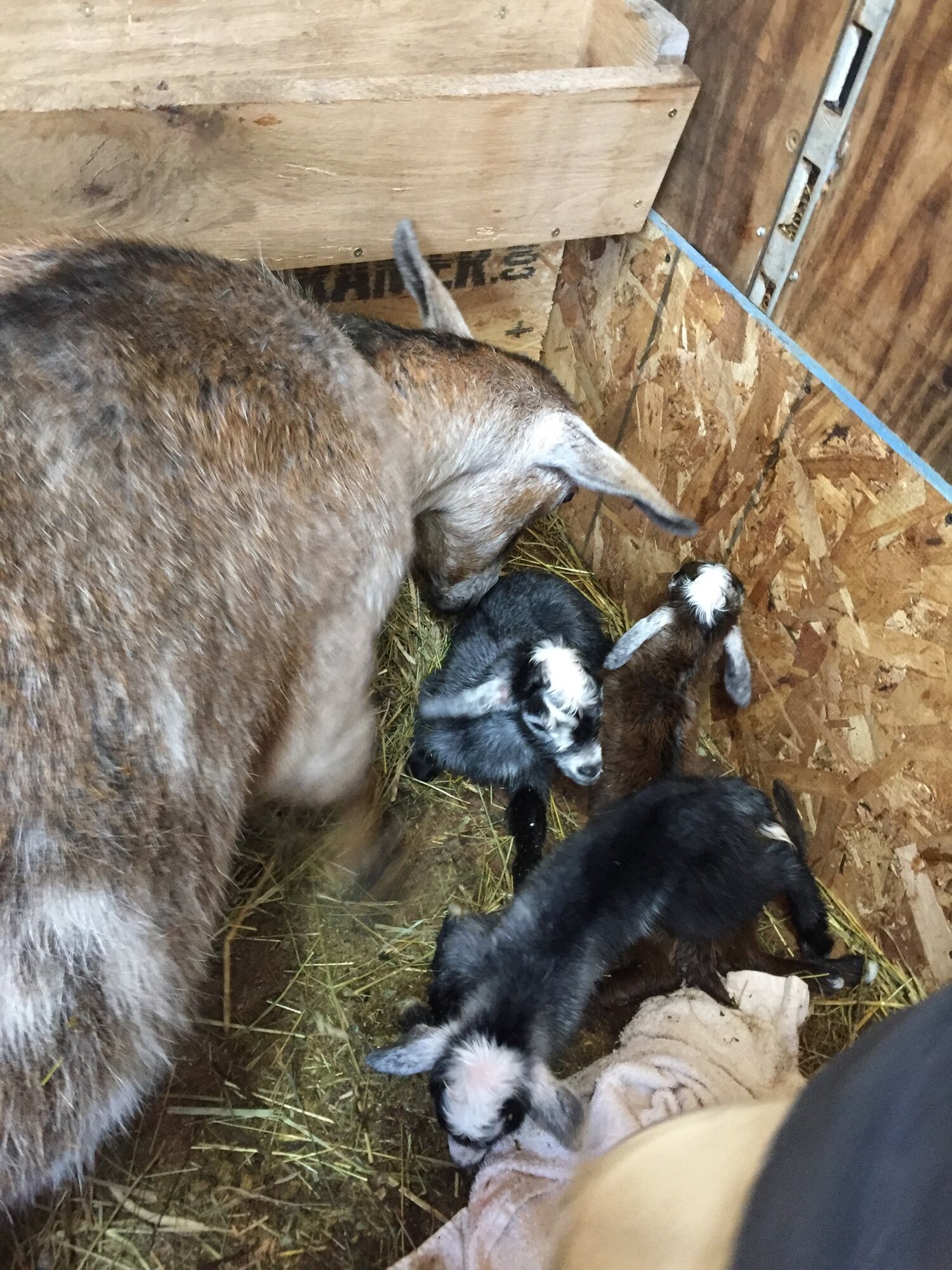 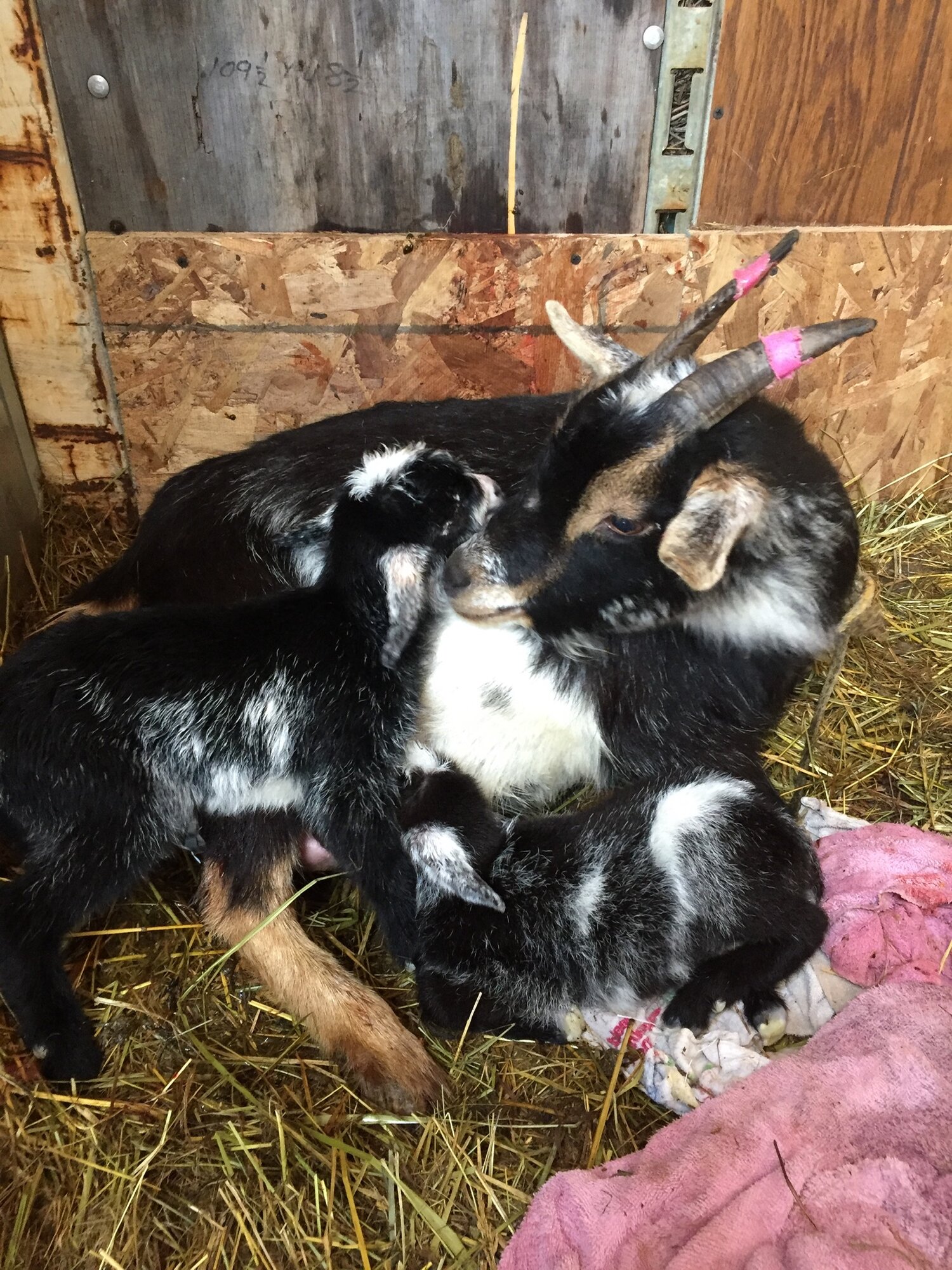 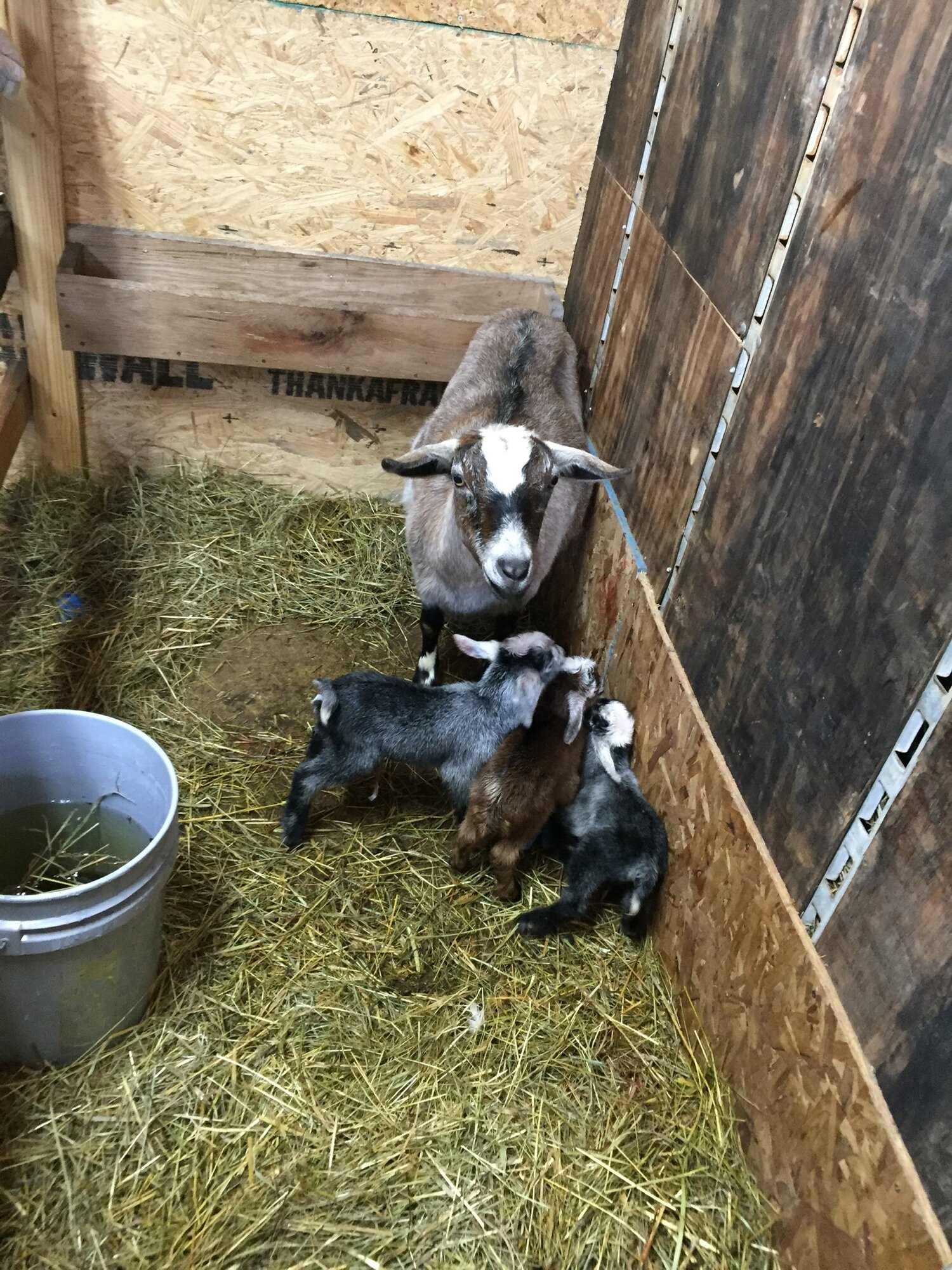 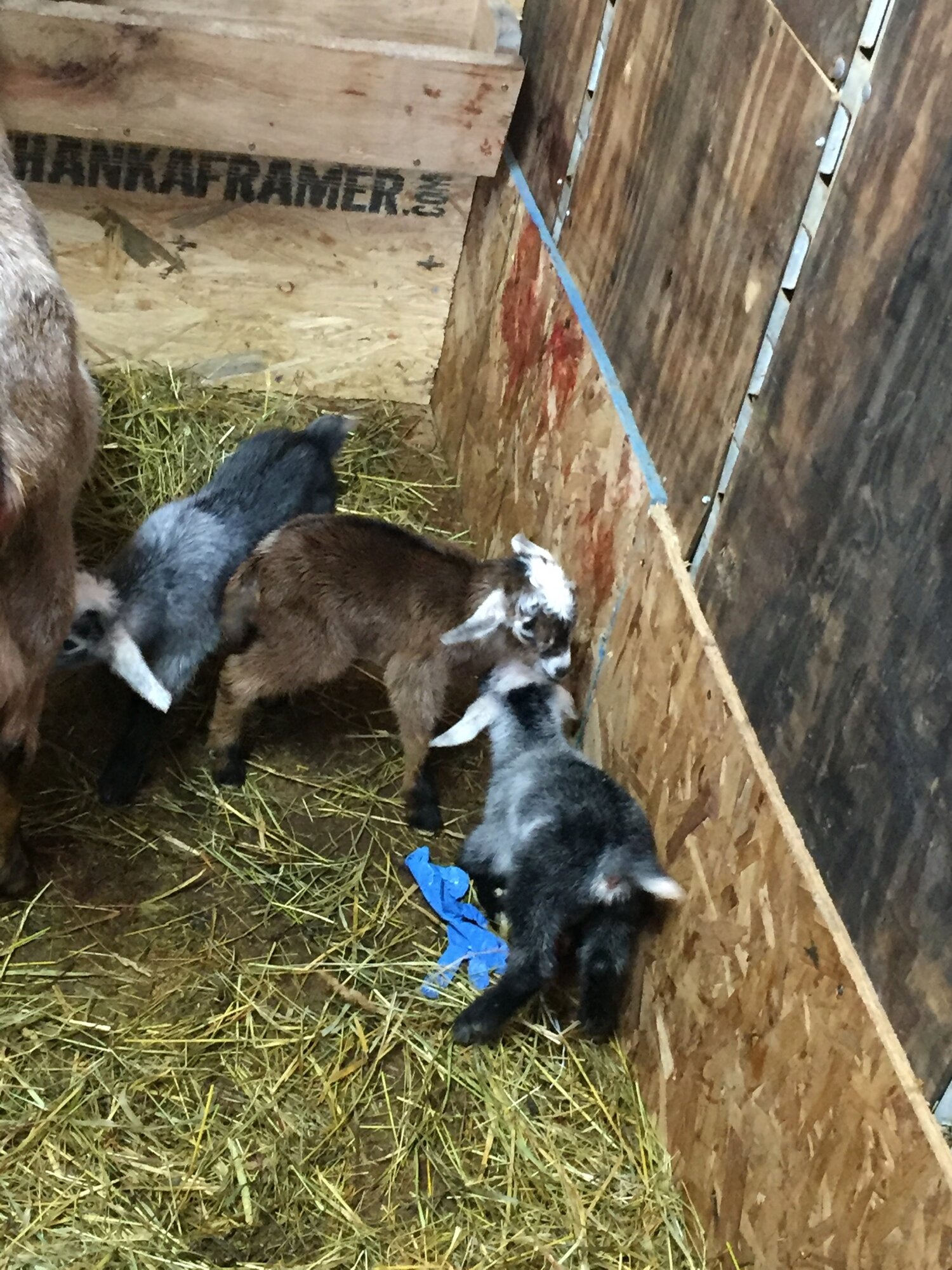 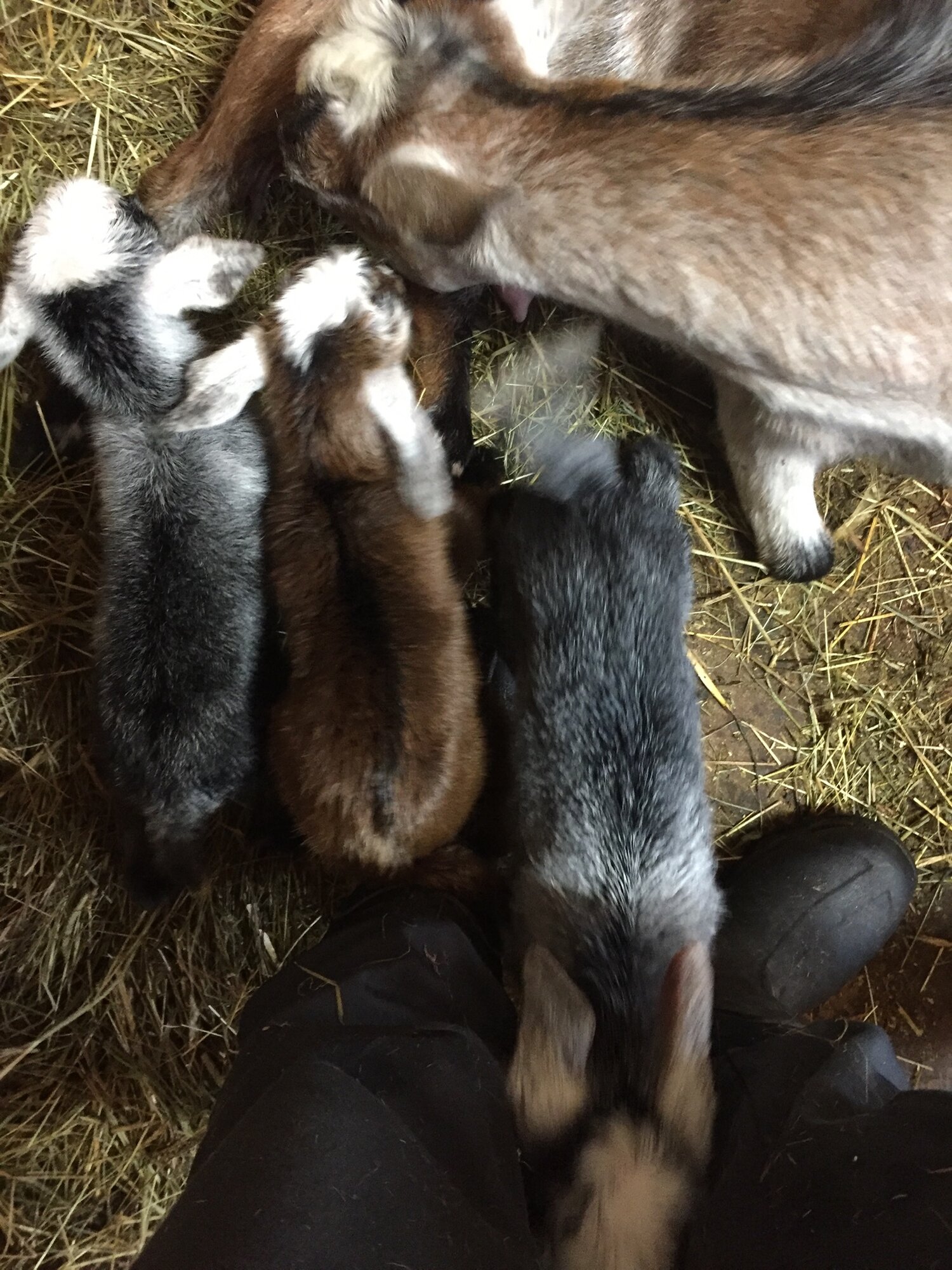 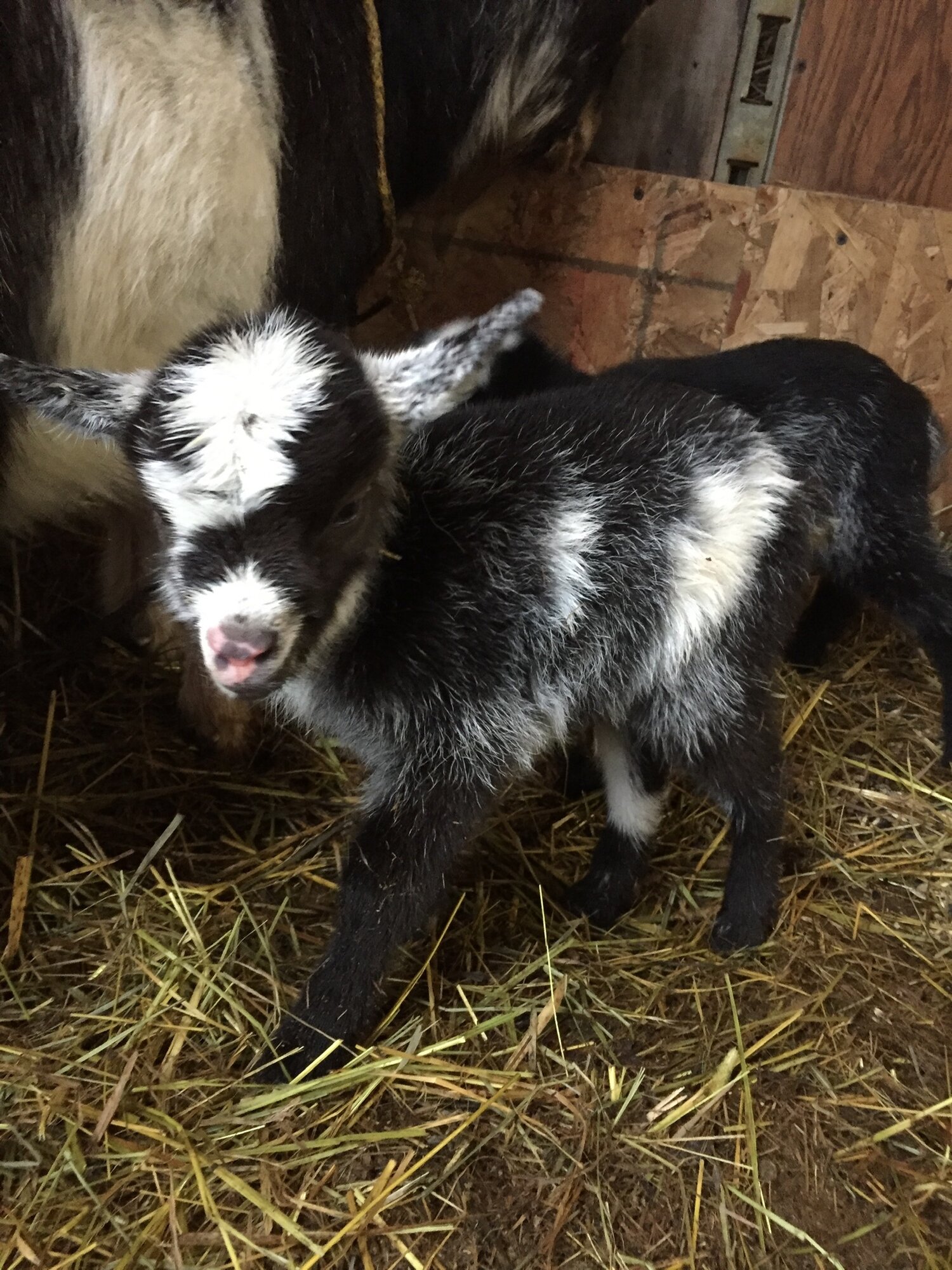 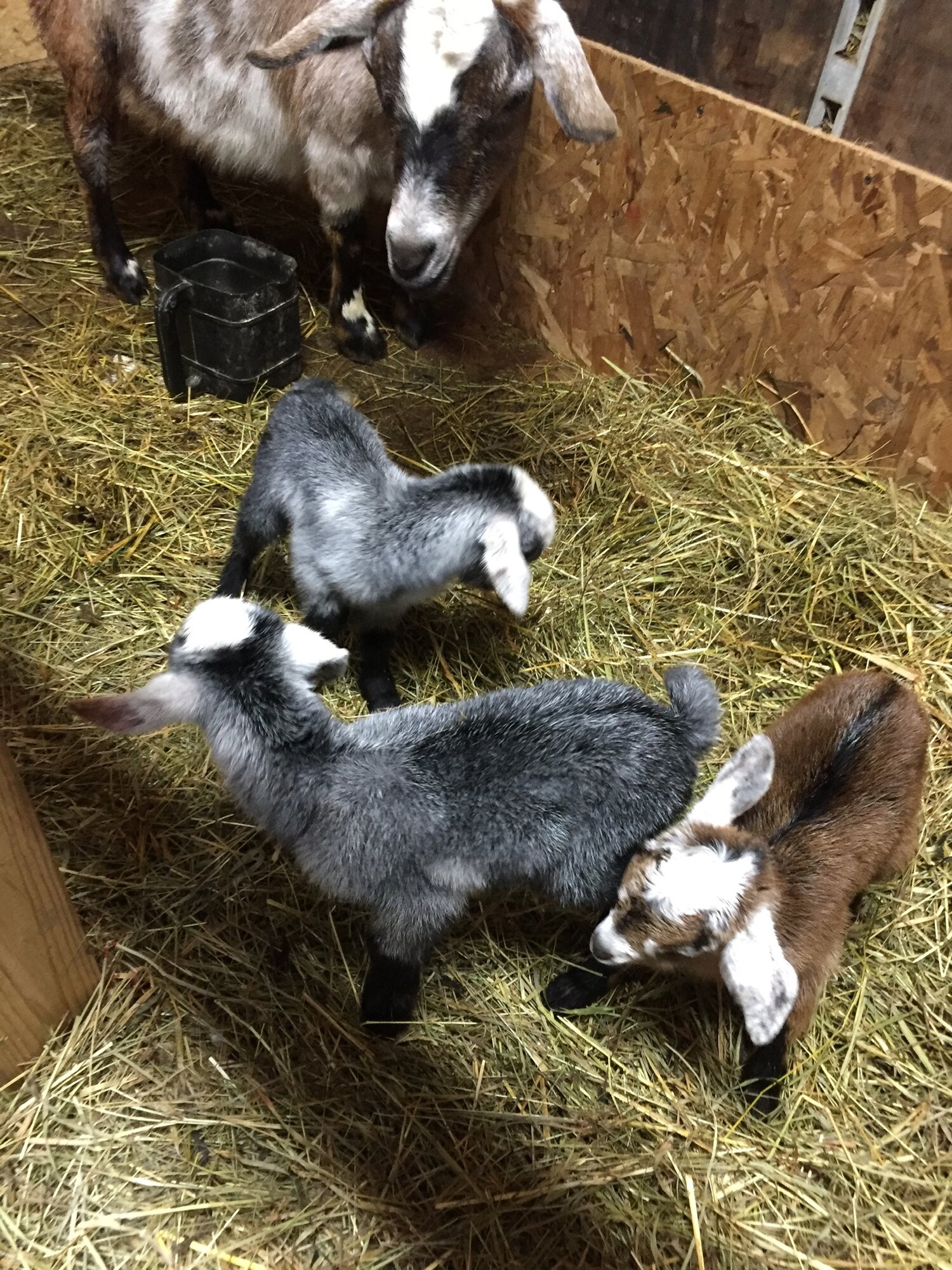 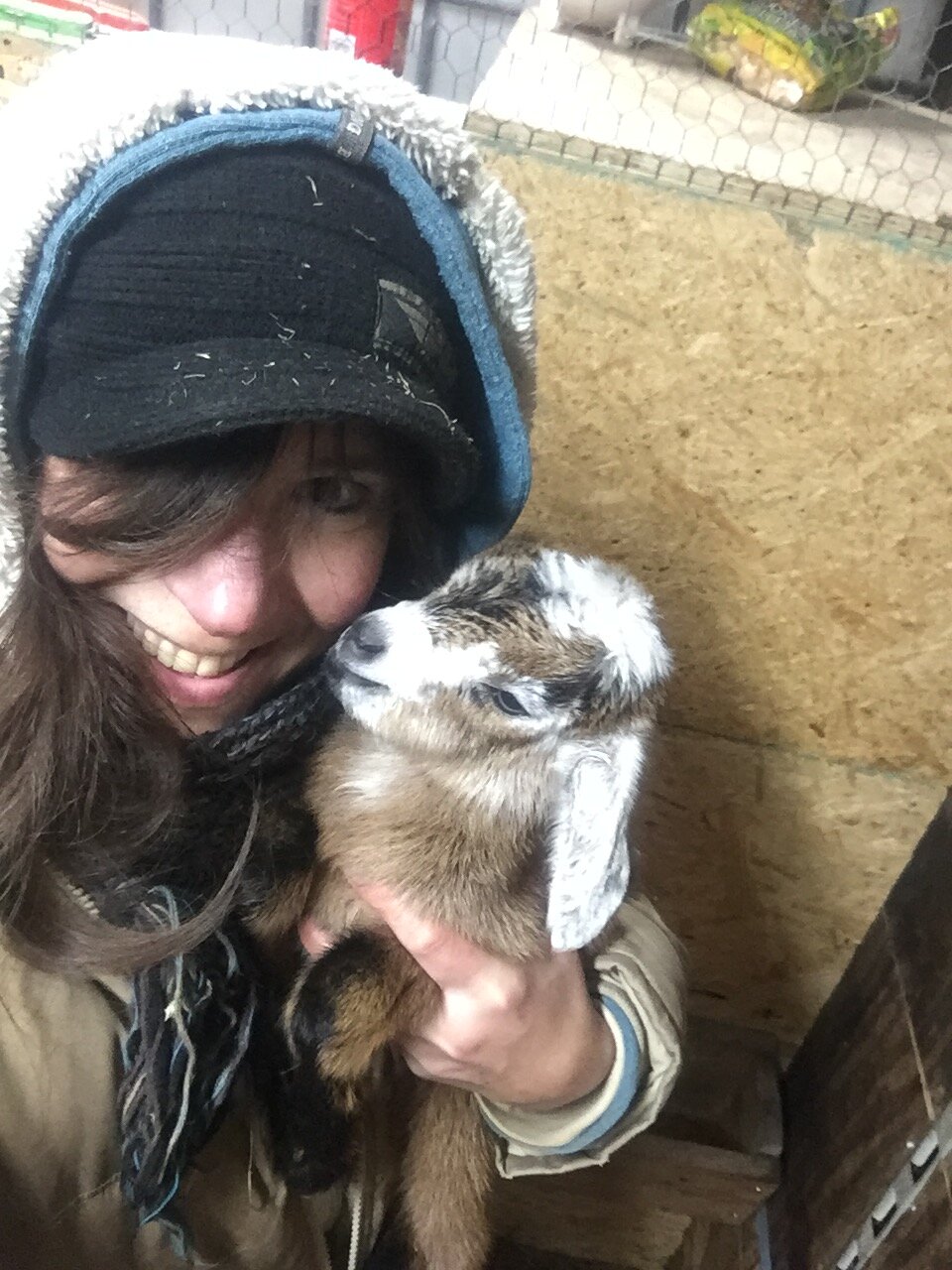 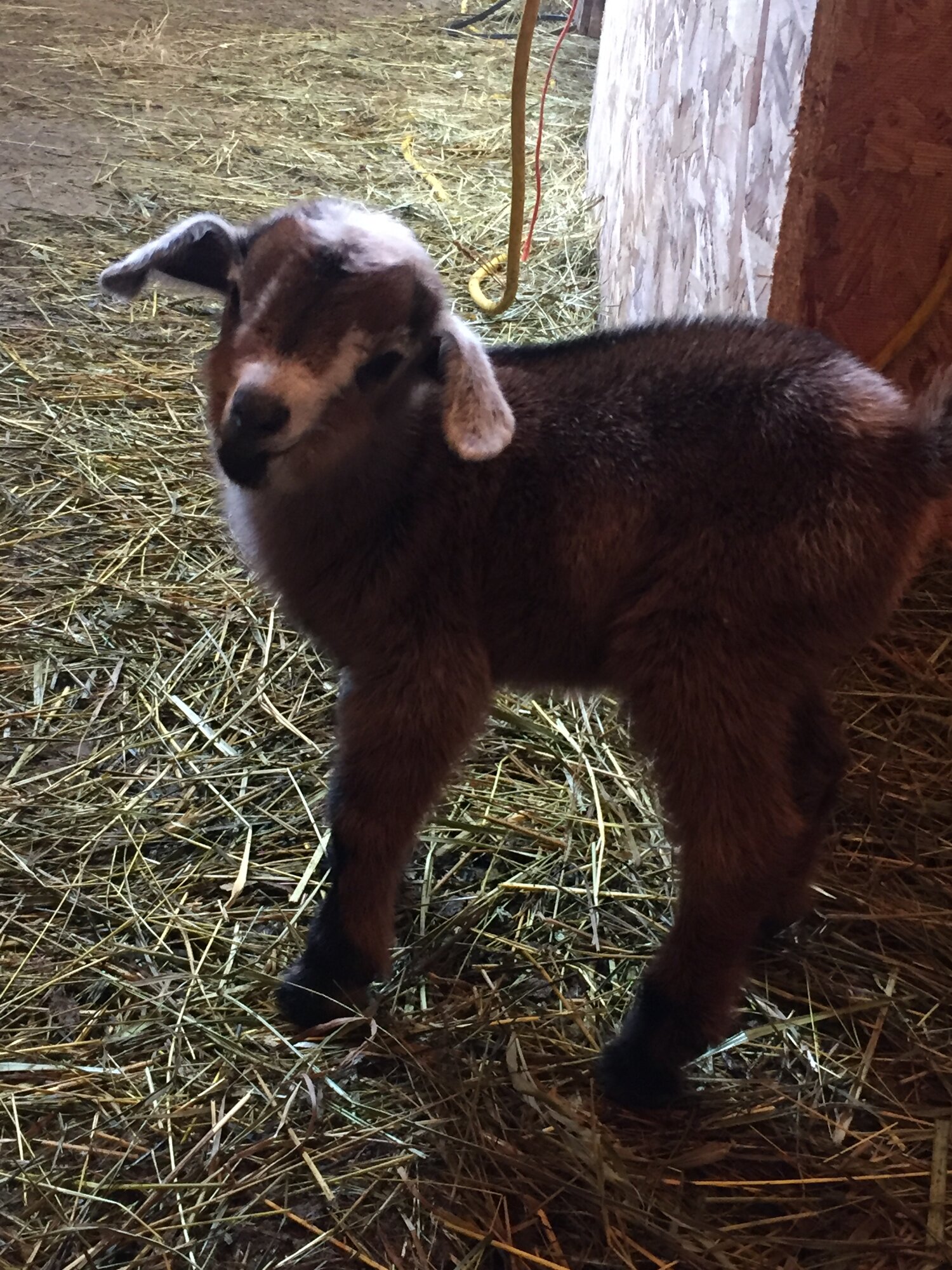 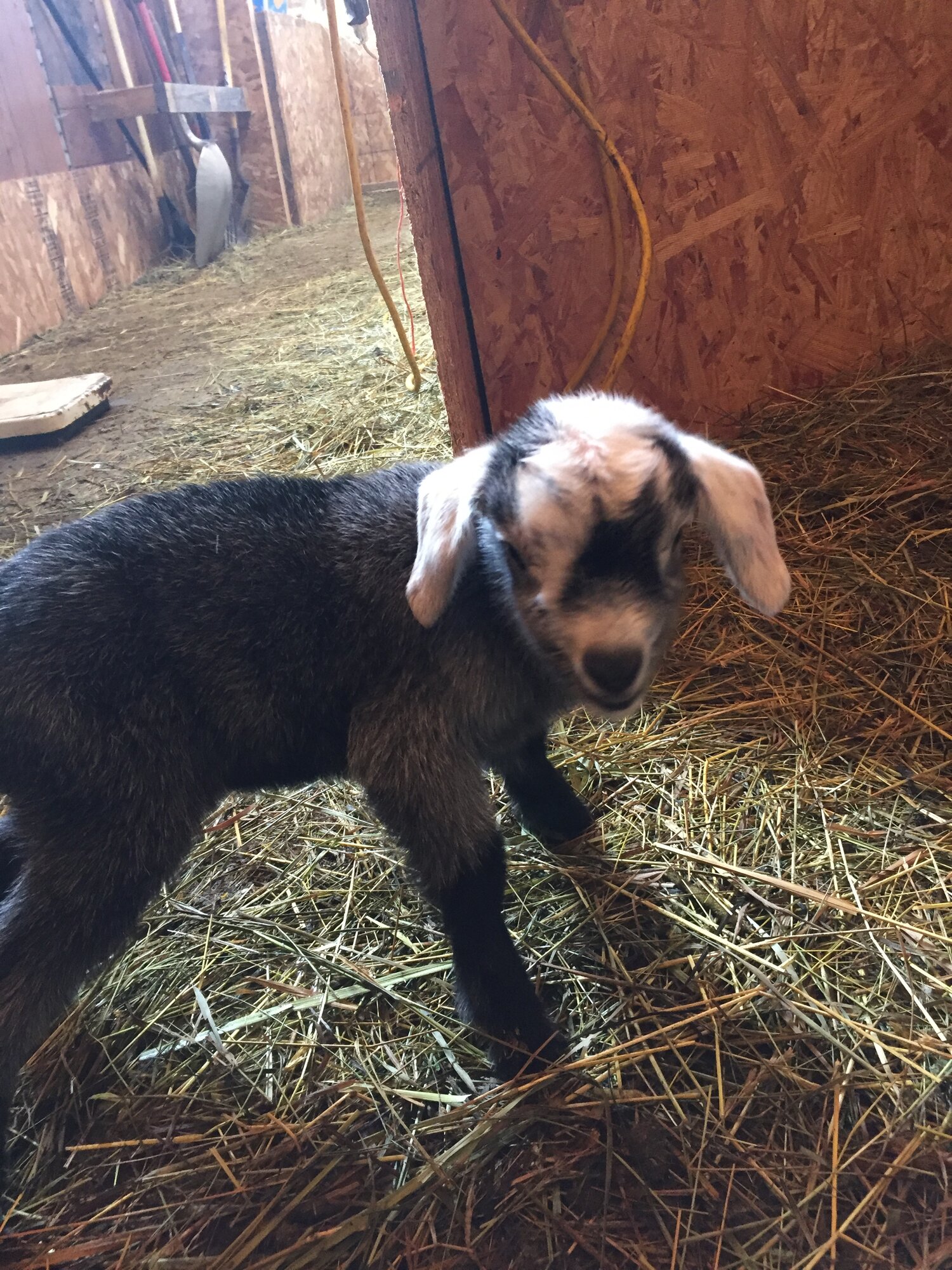 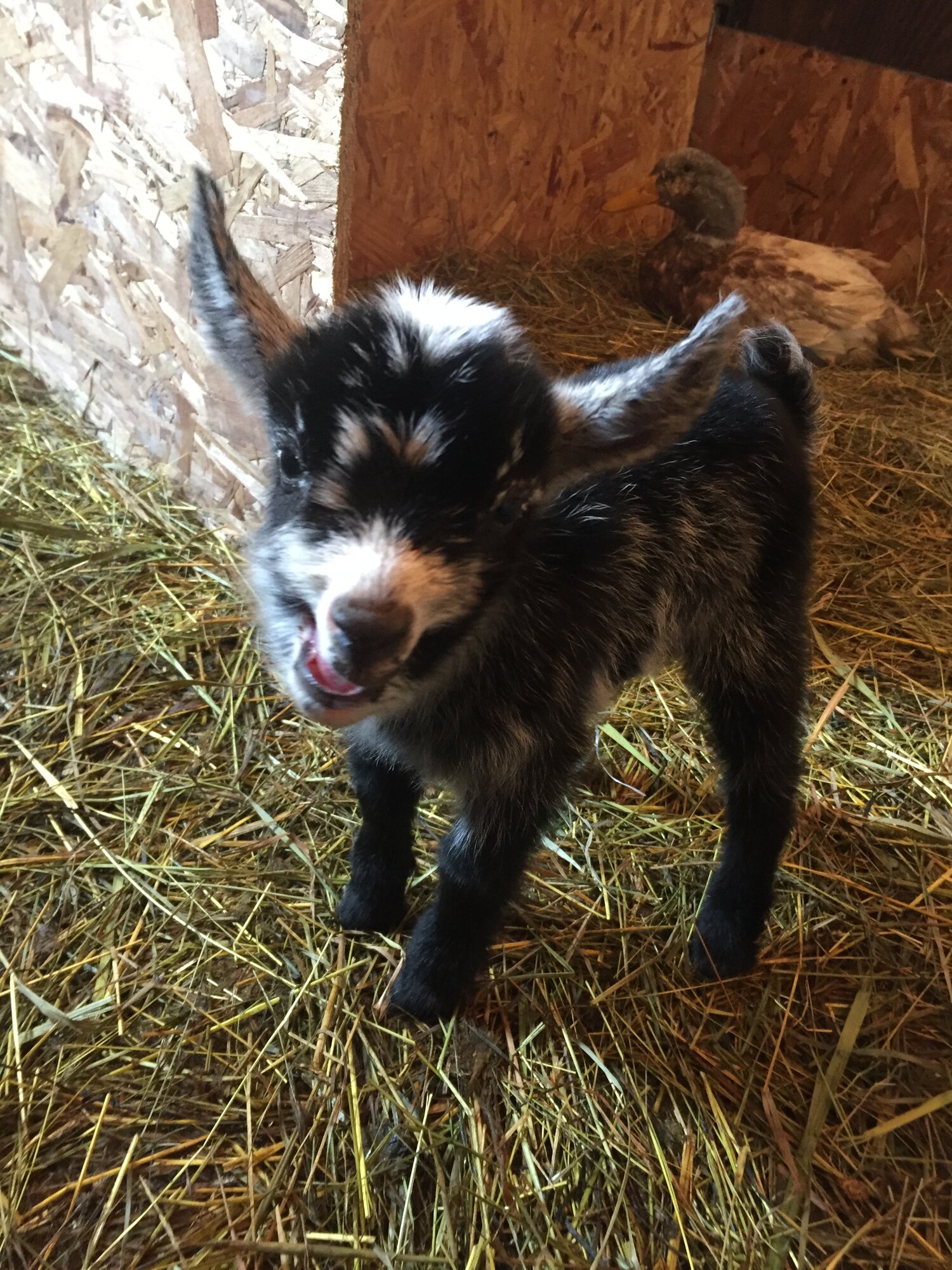 How wonderful for you and for the kids to all have each other to play with!

I am glad that everything went well. Just a comment. You can pick up the kids by the hind legs and swing them in an arc. The centrifugal force helps clear the airways. I was always glad that a kid I was pulling was breech. That way I didn't have to worry about the head.

cassie said:
I am glad that everything went well. Just a comment. You can pick up the kids by the hind legs and swing them in an arc. The centrifugal force helps clear the airways. I was always glad that a kid I was pulling was breech. That way I didn't have to worry about the head.
Click to expand...

Yes...that it was I read to do.do...and pull downwards...we held them all upside down to clear airways and suck out the gook...that worked great...my hubby worked on his inches farm when he was young and birthed calves. This was more fun he said...

but, we still weren’t glad it was breach..it took a long time to come out after the sac broke and we had to go in...we were scared..that part..I could do without....

Oh geez, I just looked at this thread! My kids are almost 3 weeks old. They have grown soooo much! They are also crazy little maniacs running and jumping through the barn!!

. You can hear the horse play when you walk up! Please ignore their bad hair cuts..

they just got disbudded..... 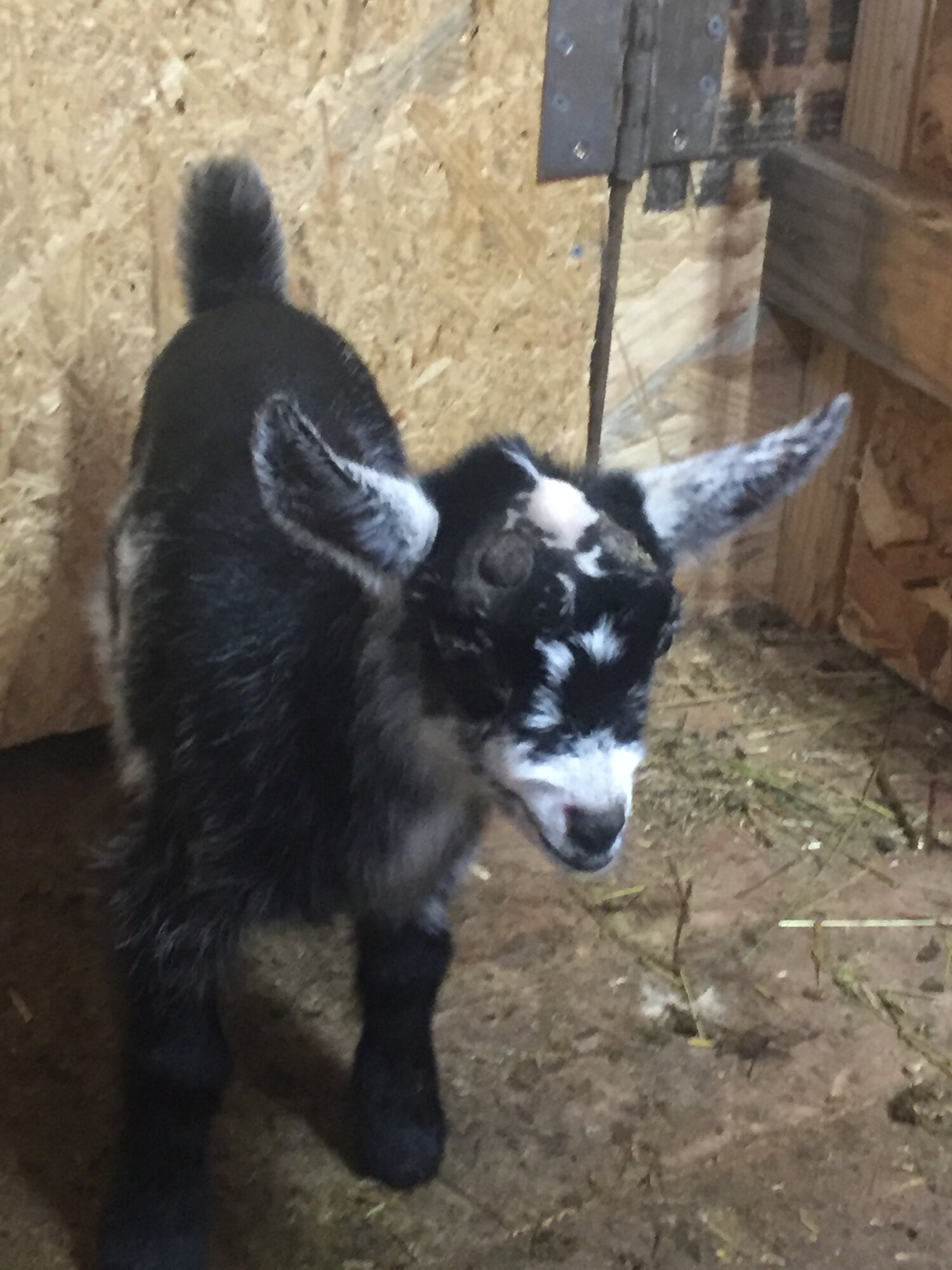 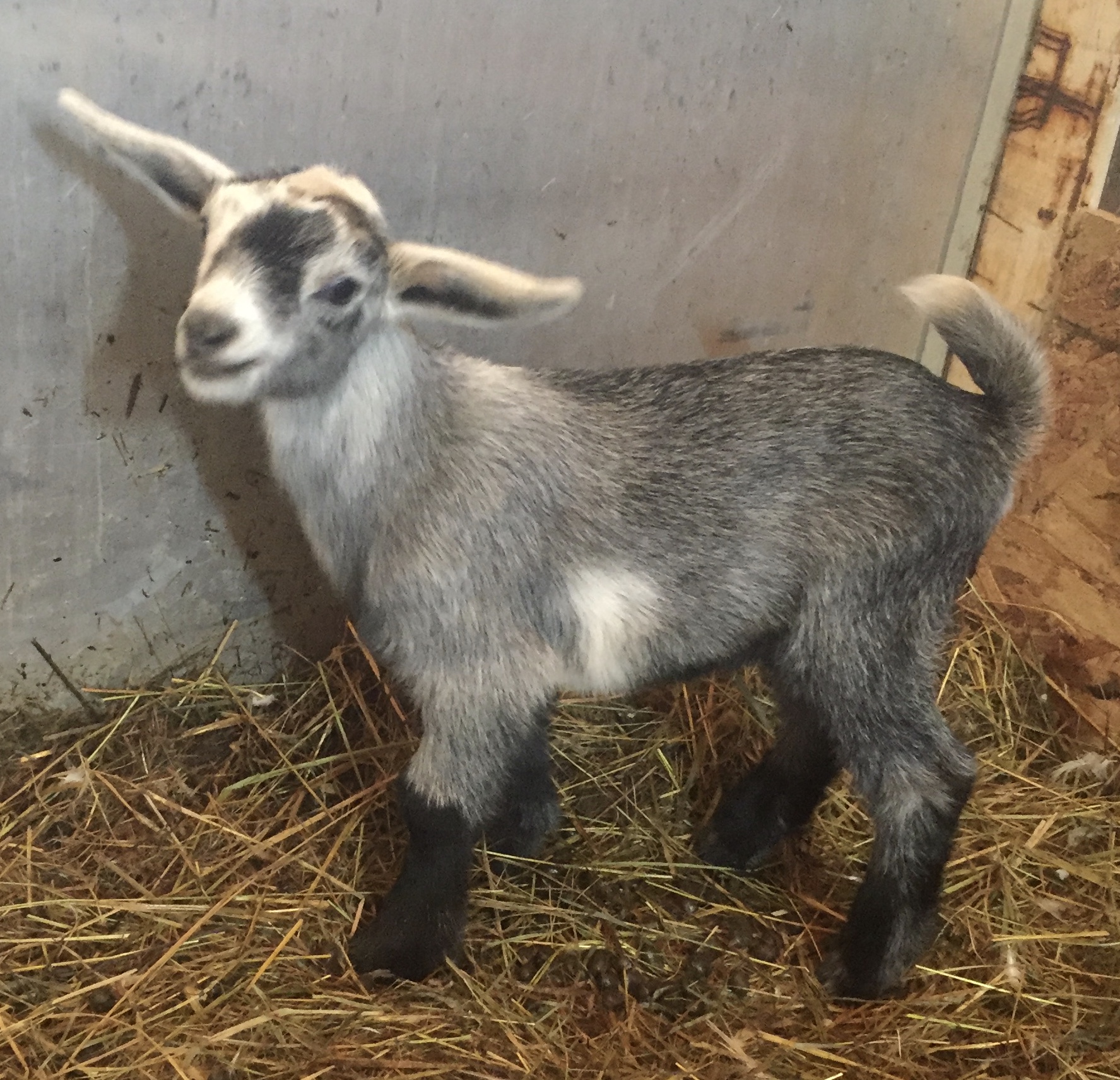 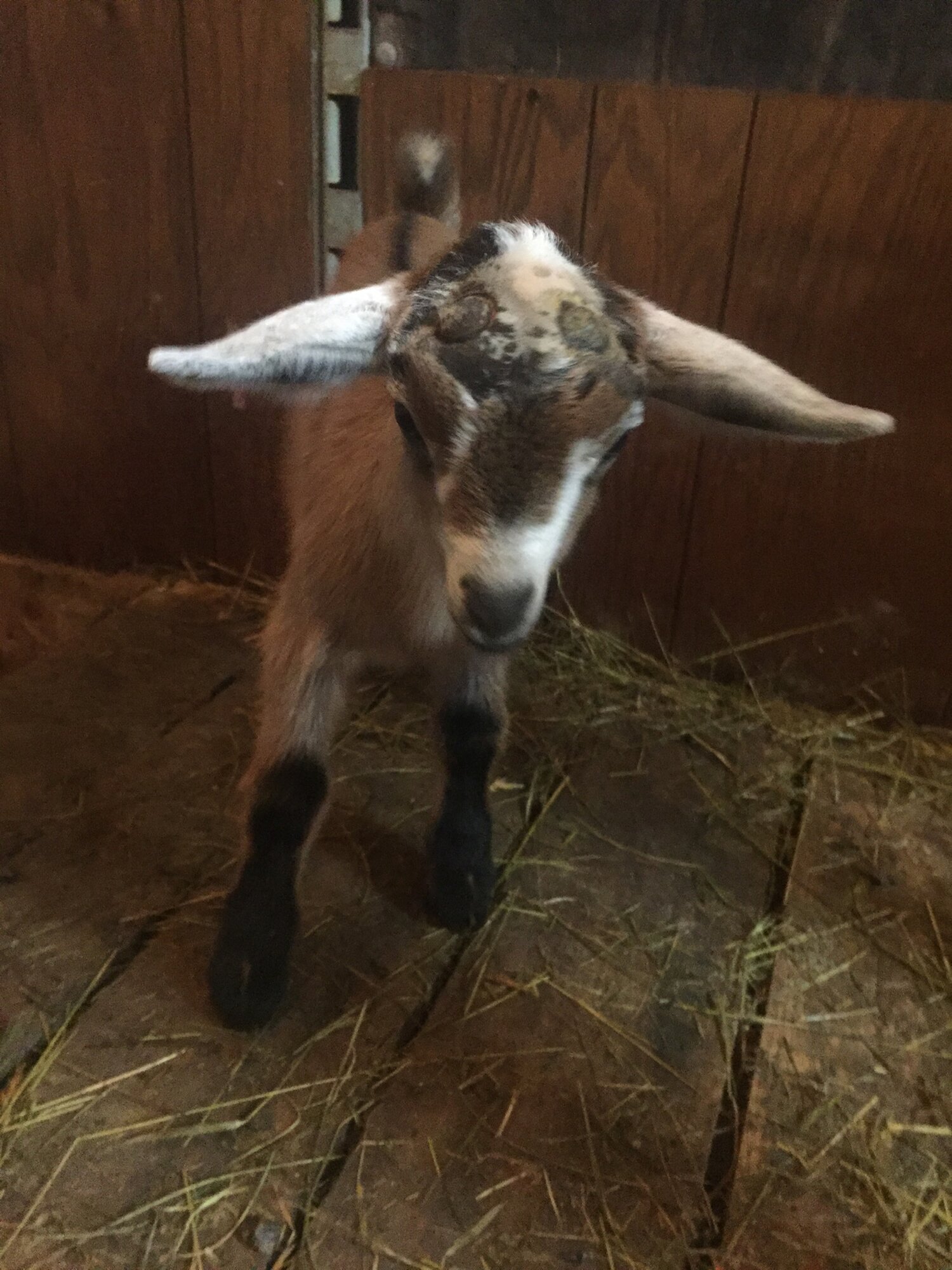 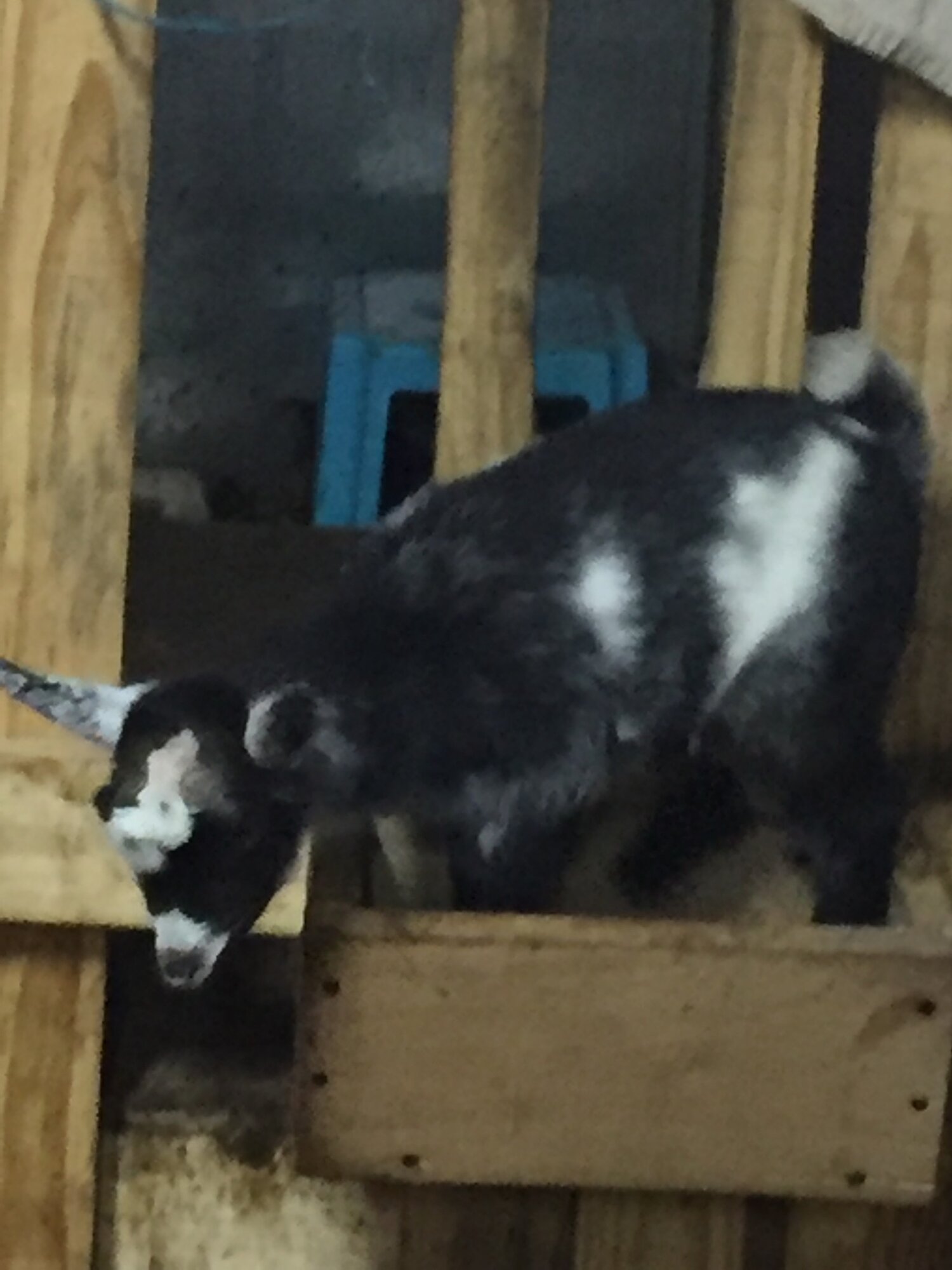 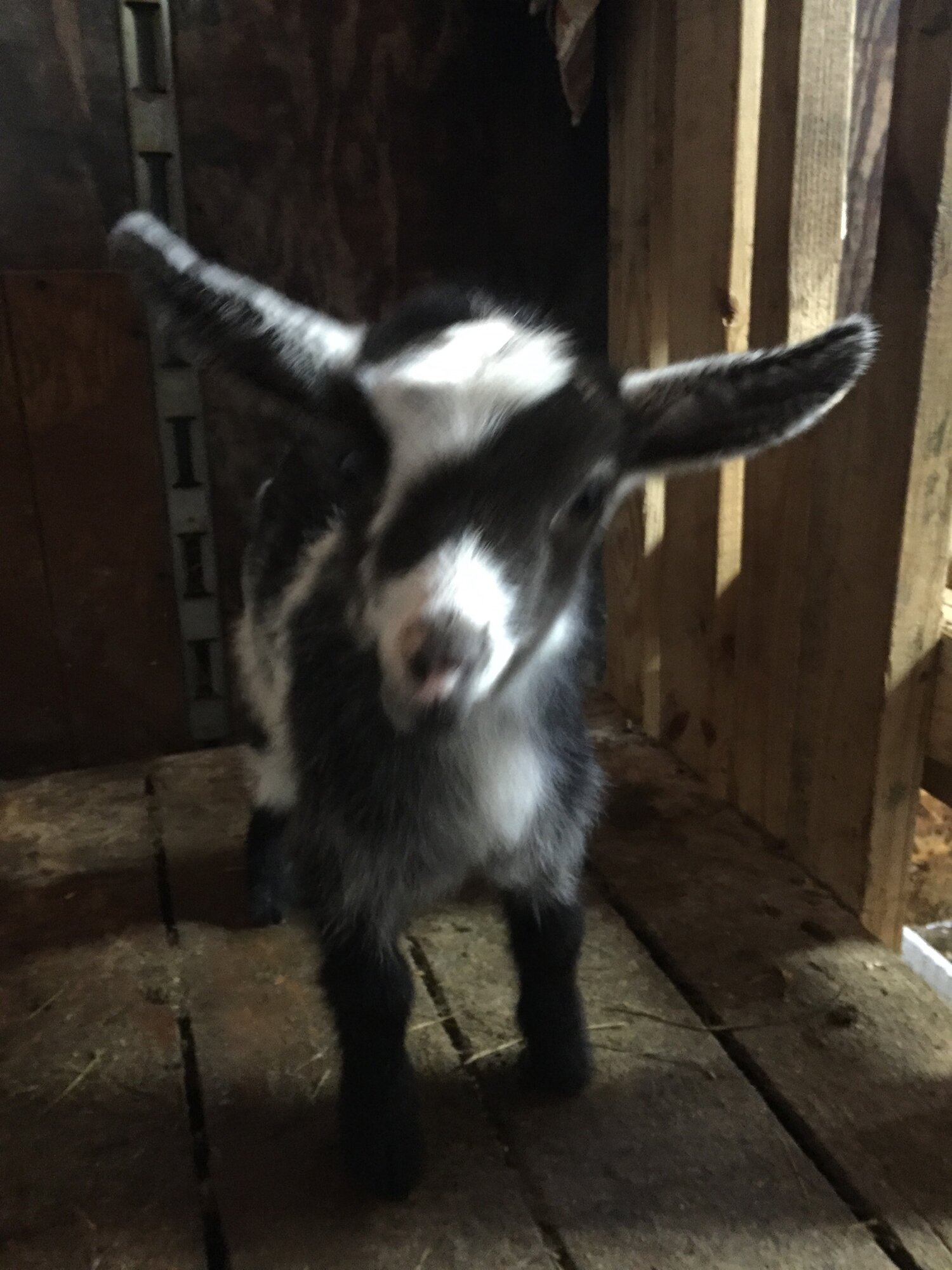 They are too cute.